Sorry for the delay, Google Blogger has been misbehaving for several days. Stay away from Google Plus, what a nightmare.
The drive from our Titusville campgound to St Augustine was only an hour and a half. We figured if we got going by mid-morning we would have time for an afternoon visit. We were headed for the Indian Forest Campground just a few minutes west of St Augustine. The folks across the way from us in Titusville were headed there as well and we heard from another Foretravel owner that they were also there.
We arrived shortly after noon and got everything set up. It only takes about 20 minutes and then we were off to see St Augustine. It claims to be the oldest city in the US. Santa Fe might argue with that. They have been a capital city since 1608. We were there in 2008 and they were celebrating their 400th anniversary being a capital city.
Somehow we were expecting a smaller, sleepy, historic town. Not! It is old all right with narrow, cobbleston streets not much bigger than an alley with lots of old buildings. Allmost all were privately owned and turned into anything that could make money. The oldest, woodem, one-room school house in America was there for you to “tour” for only $40. There were very few free places. Even Parking in the city owned public lot was $10 and a walking tour guide at the visitor’s center was $3.00.
Off we went to see and do. Lots of people, lots of traffic. The city has Spanish origins and had a nice central plaza. 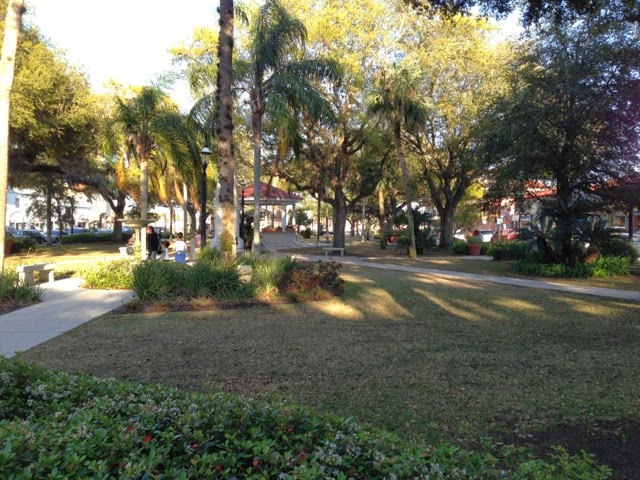 At one end is the Government Center. A Catholic curch on one side and an Episcopal church on the opposite side and at the other end, the market. All the bases covered. No Lutherans anywhere to be seen. 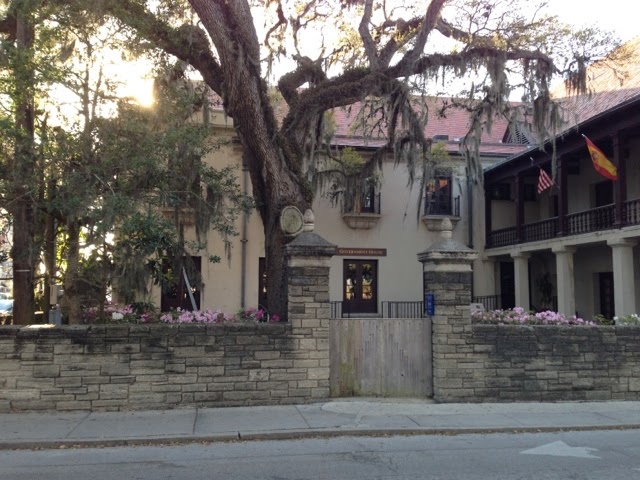 This is not the original Government Center but a rebuilt one. Almost nothing survived the Spanish then the French then the Seven Years War then the Spanish again then the British then the Americans and then the tourists. Mexico had something goimg on in there for a while as well. The city was nearly burned to the ground and most of the inhabitants were killed or fled at every change of control. Nice.  There are only a couple original buildings at all and the tourists are doing their best on those.
The “old” main street is a narrow track filled with tourists, people selling stuff to the tourists and people selling things for the tourista to do. 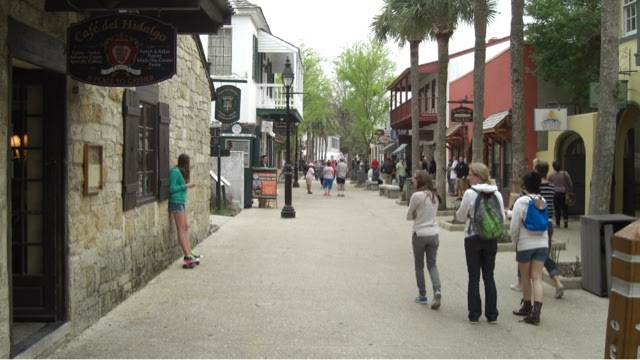 It really was more crowded than this. It was in the low 60’s with a stiff breeze and not much sun.  Everyone in shorts was secretly suffering. I had my jeans on and was secretly wishing for a jacket.

At one end of the historic district was a really nice Visitor Center and a parking ramp half surrounded by a moat and some nice wooden bridges. 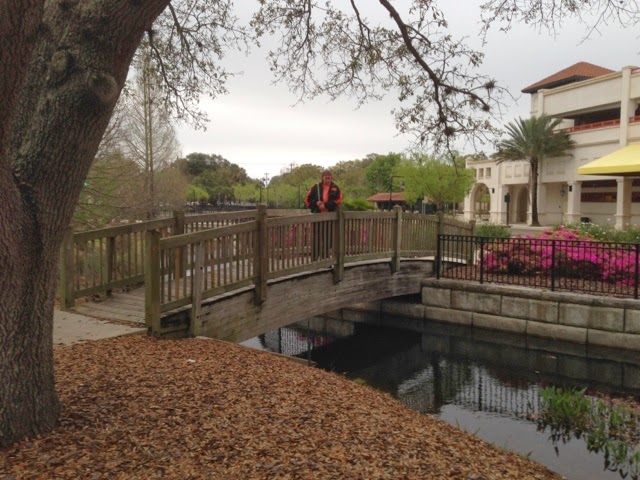 The leaves are falling everywhere. It is just like Fall and at the same time everything is covered by a layer of green Sringtime pollen. We had an early dinner at Barnacle Bill’s, shrimp. It was sort of like eating with Forrest Gumps shrimp cooking buddy, shrimp every conceivable way. We had the shrimp. I had some cheesy grits as well. Pretty tasty.

St Augustine is the home of Flagler College. Now we know where our friend Bob Flagler is spending his winters. 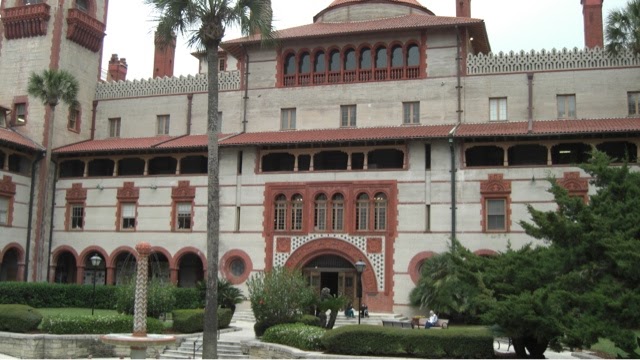 Beautiful woodwork inside and stunning murals. 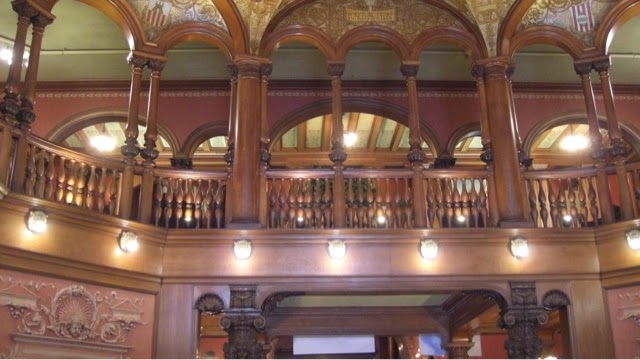 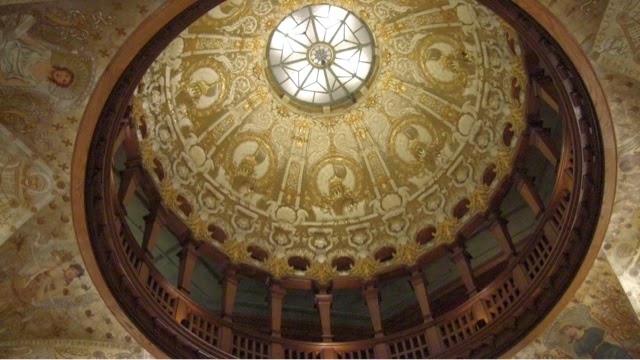 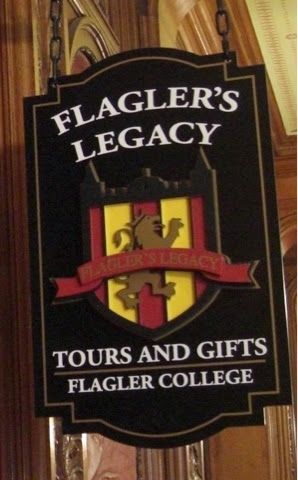 No idea what they teach here but the buildings were pretty amazing!
Back at the campground after a grocery stop I visited Forrest and Mary Clark, Foretravel full timers originally from Green Bay, WI. They were very nice. It is always nice to meet folks and swap stories about things we have in common.
Tuesday, March 25, 2014
Today we drove over the bridge to Anastasia Island and then to the southern end where the Matanzas River empties into the Atlantic Ocean. The Spanish built a fort there in 1740 made of shells, sand and ground up shells burned in a fire to get lime ash to make cement. This small fort (Fort Matanzas) was about 50’x50′ and 30′ high. It had six cannon, a watch tower and was manned by 6-8 soldiers for a month at a time from the bigger fort at St Augustine. It is a National Park site and you have to take a free ferry to get to it. 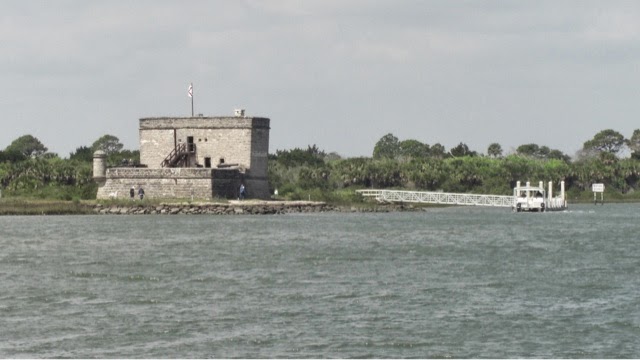 It took three years to build.  After long since falling into disrepair (ruin) it has been restored. Their cannon could reach the inlet a mile away to deter invaders or unwanted visitors (French). Can you imagine a month out here almost 300 years ago in the summer heat, humidity and mosquitos? In your Spanish Army duds?

We followed the Atlantic coast line back to the far northern end of the island to Anastasia State Park. A friendly ranger gave a short term visitor pass so we could check out the campground.  We were going to stay here but it was full. No wonder. It is a nice park, nice campsites and right near the ocean beaches. Across the road from the park is the St Augustine Light Station. We went on the walking tour (for a small fee, of course). 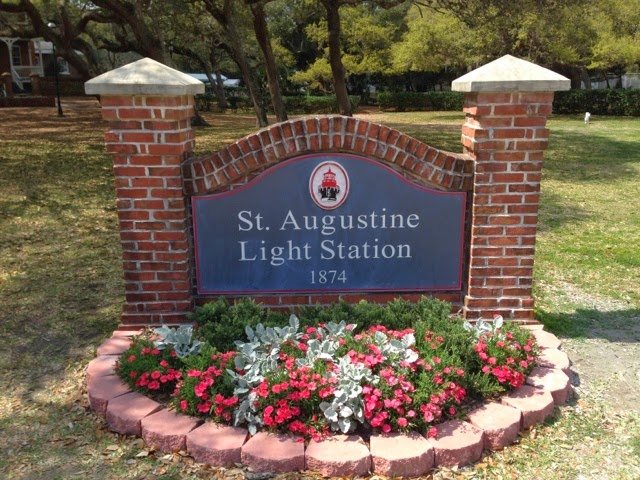 The keepers scraped and painted the tower twice a year. It would sort of make me dizzy. 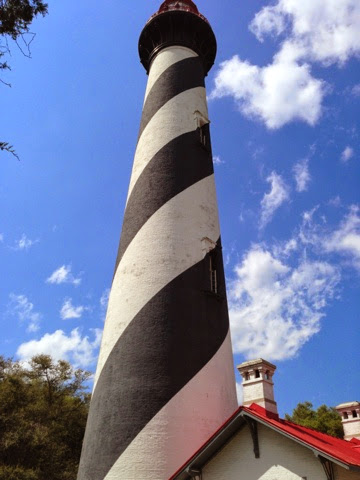 The keepers house (a duplex) was beautiful, surrounded by huge Live Oak trees. It is the most grand light keepers quarters that I have ever seen. The Live Oak trees were prized by shipbuilders because of all the crooked branches that happened to be the shape of the ship parts they needed. 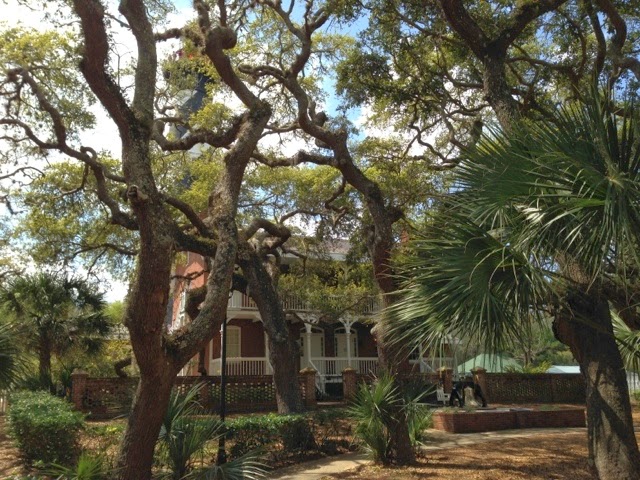 The interior was deluxe Southern Victorian. 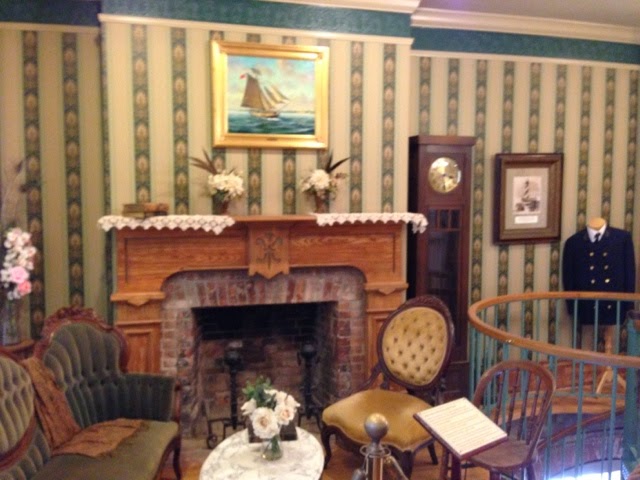 There were also displays about the shrimp boat building business and the shrimping industry. St Augustine played a major role in the development of both. More displays were about hunting for ahip wreaks off the coast and recovery and the restoration of artifacts. There were classes going on about the craft of building wooden boats.  A simple sail boat and a nice looking row boat were in progress.  Very nice. As a woodworker it has always been something I would like to do.

Then it was off in search of another seafood experience.  The day before we had picked up a menu for Harry’s New Orleans Style seafood place.  It looked very good. Off the island, one way, over the draw bridge. Pretty easy going into St Augustine. Three directions of traffic converged on the bridge from the mainland side and cars were backed uo for several block in every direction. We found a parking spot just a half block from Harrys. It was a very pleasant outdoor, early evening dinner. 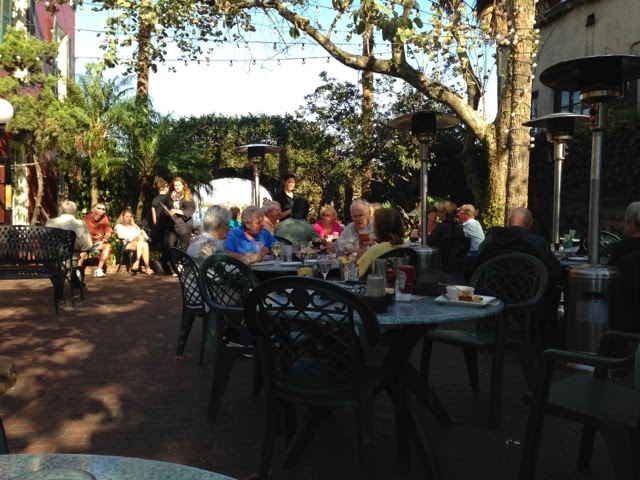 Sorry, no dinner pictures, we ate it all before taking any. We shared crab cakes, blackend red fish, red beans and rice, grilled andouille sausage, cole slaw and key lime pie. No leftovers. Why is it called cole slaw?
After dinner we walked to the city’s public marina. There was a tall ship there that calls St Augustine one of it’s home ports around the world. 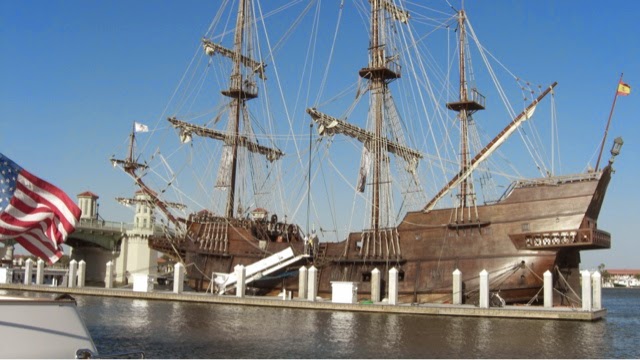 A few other tubs floating around as well. 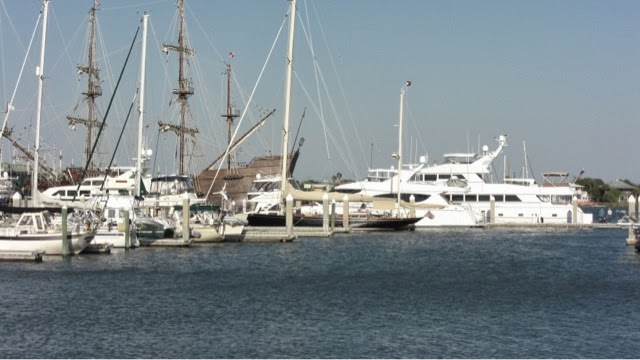 The beautiful balck sail boat was 78′ long.  The next white boat out was close to a hundred. The monster at the end was about 160′ long.  I walked out there and the bottom row of rectangular windows just above the dock were about head high on me.  A guy there said it had a crew of 20 and was available for lease by the month.
Where is my row boat? Actually we would like to get a couple of kayaks to haul with us if we are going where we might be able to use them.
Back to the Indian Forest Campground where it is dropping into the 40’s overnight.  We are off to a Jacksonville city campground on the St Johns river where it empties into the Atlantic. The Mayport (I thought it was the Mayhem) Naval Air Station is right across the river. The river is the main seaway access to the port of Jacksonville. Maybe some big ships?
More as soon as I can.  And Google willing.
Roger and Susan