We headed North again, this time to Jay Cooke State Park.  We were here last year after the really huge flood of 2012. 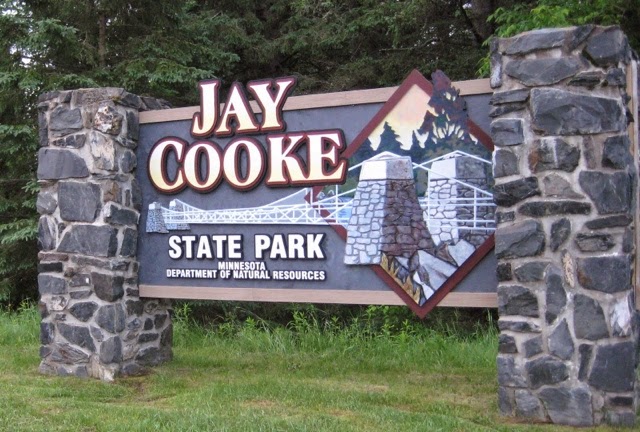 2012 Flood
The park and infrastructure inside the park suffered more than $150 million in damages. The famous Swinging Bridge was severly damaged. That’s it from above at the peak of the flood.  This is the fourth bridge here.  All have been damaged or destroyed by floods since the park was opened 99 years ago. 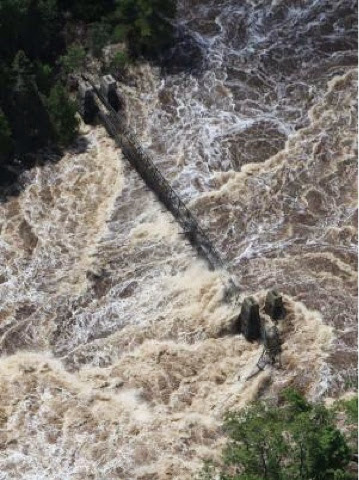 At the height of the flood following about 10″ of rain in the St Louis River watershed over a 24 hour period more than 350,000 cubic feet per second was flowing through this section.  The bridge span was under water.  The water level was almost 25′ above normal.  The normal water flow is only about 3,000 cu ft per second. 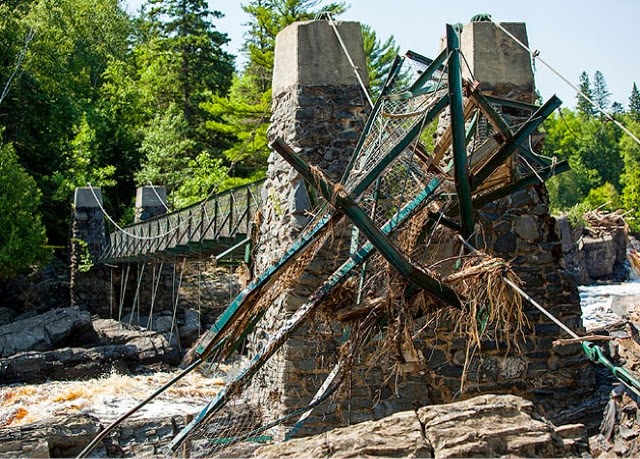 All 50 miles of hiking trails were damaged.  The highway into and through the park was washed away in three places including a bridge and more than 300 ft of the hill side.  This all happened because the Forbay Lake retaining wall failed and 3/4 of a billion gallons of water flooded down hill in less than 15 minutes.  The view from the new bridge is now one of the best in the park. 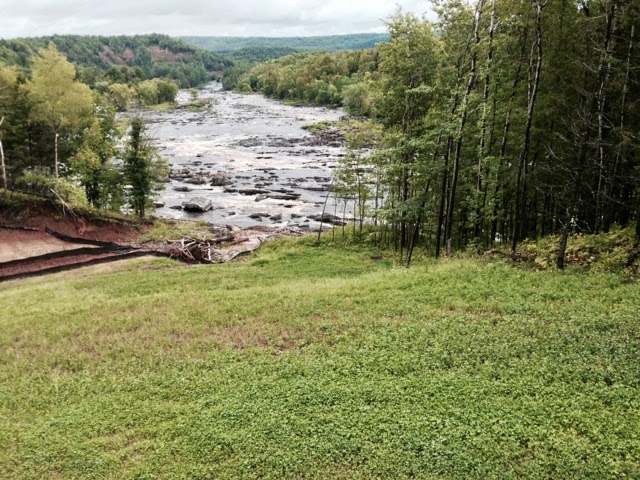 The bridge was being rebuilt last year when we were here and it is now done and the trails across the river are now open.

The Forbay canal and lake held water that feeds the largest hydroelectric plant in the state about three miles down stream from the Swinging Bridge.  In addition to the canal and lake damage the six generators in the hydro plant were flooded and damaged.  All are being rebuilt as is the canal and lake with new emergency spillway and flood gates.
A New Bridge 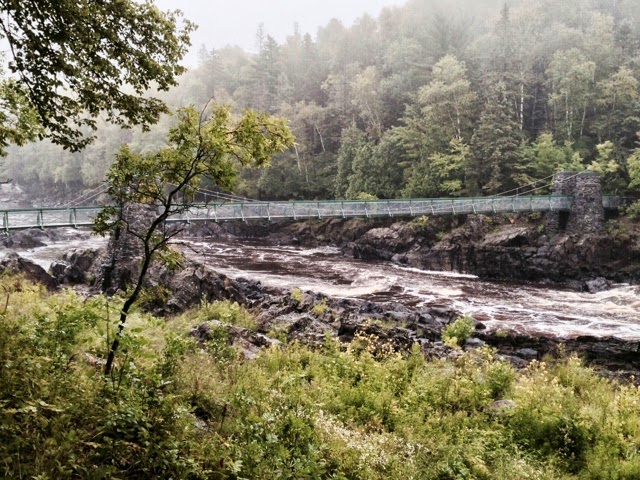 The Swinging Bridge is on the Register of Historic Sites so it has been rebuilt to as close as possibleto its  configuration when listed (plus engineering improvements). It doesn’t swing as much nor does itsqueak  and creak as much as the old one.  When it was reopened in late October, 2013, 4,000 people came to the park on the first weekend just to cross the bridge.  The first to cross was a family with young kids who had never been across the bridge.  Soon after a senior swinging bridge veteran crossed.  This was the fifth of these bridges he had crossed and was hoping this one would outlast him.
Good Hiking

Sort of foggy, humid and drizzly while we were there.  Rained at night but daytimes were OK. 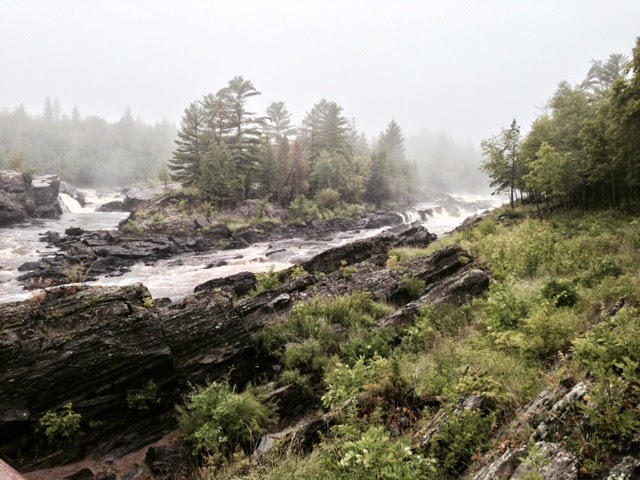 This is a great place for hiking.  Lots of nice trails of varying challenges including for aome just getting over the bridge. Less swinging for this one was a good thing. 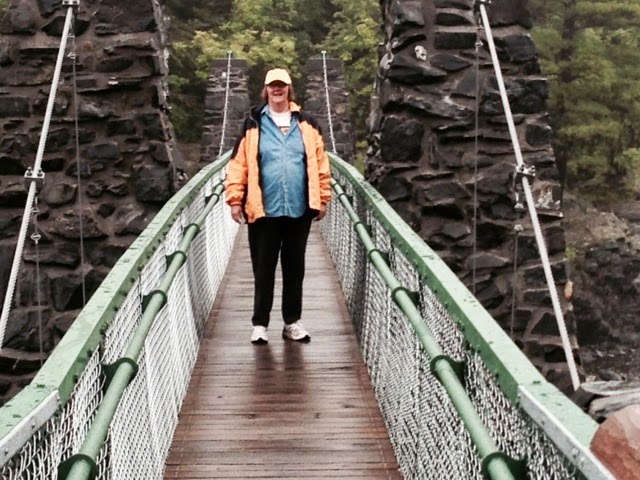 Most of the trails are also used for skiing in the winter so they are wide and smooth.  Some are narrow, rocky and full,of tree roots.  Our hiking poles help. 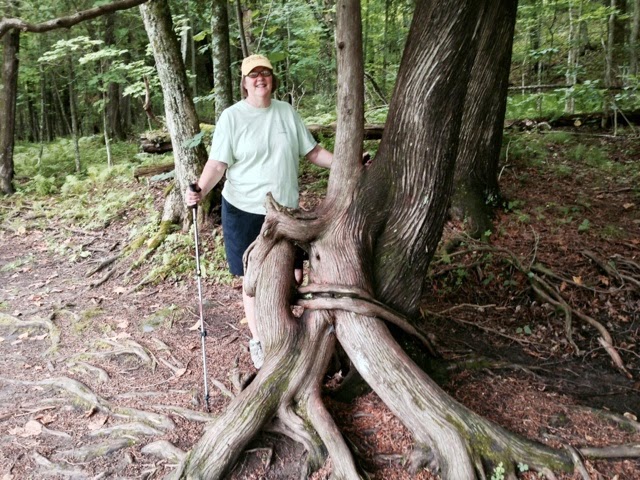 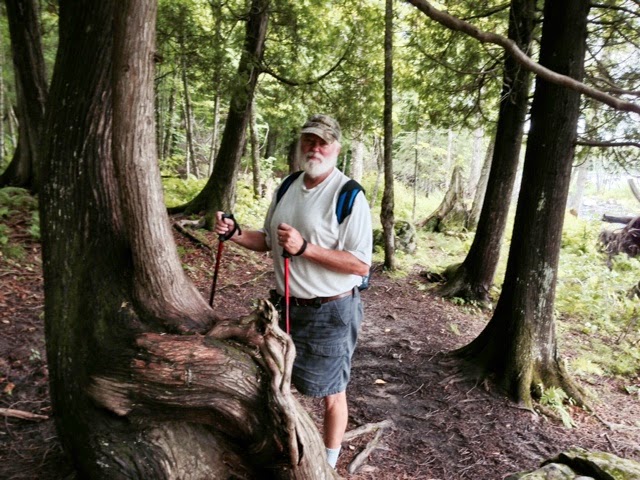 This was a tree growing on a tree with exposed roots intertwined.
Wednesday we hiked about 4-5 miles through the woods on the other side of the river.  There are amazing stands of white pine and giant Birch trees.  Some of the Birch were close to three ft in diameter. It is hard to estimate height but they had to be at least 60 ft tall.  There is a sharp ridge between the river and the area south of the park.  These trails followed along the ridge with very steep slopes on either side.
This area is all ancient seabed.  Most of the rock is shale, graywacke and tompsonite compressed over billions of years from the sea floor and heated by deep volcanic action that formed most of the Lake Superior basin and then folded and thrust upward.  It makes for some rugged terrain. 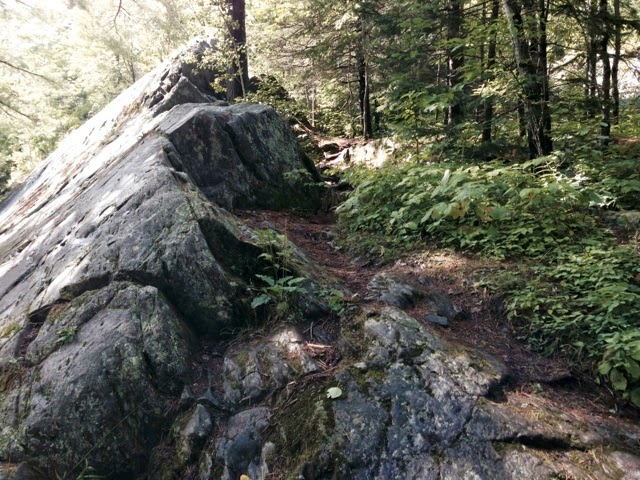 Thursday was an 80% chance of rain day. So we went on a 6-7 mile hike along the trails in the park that commect to the Munger Bike Trail and then into Carlton and back.  The Munger bike trail goes from Duluth south to Hinkley, maybe 90 miles.  Easy hiking on the paved trail except for some off trail excursions. 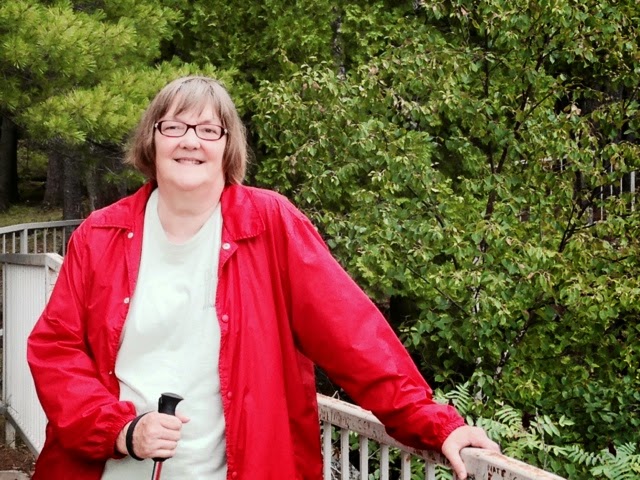 It never rained.  The Munger trail crosses the St Louis rIver on an old railroad bridge just down stream from the Highway 210 bridge and the Thompson Dam.  This part of the river is a favorite of whitewater kayakers. 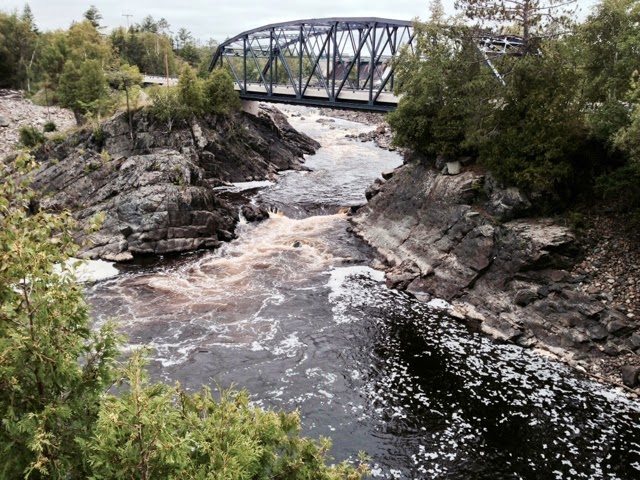 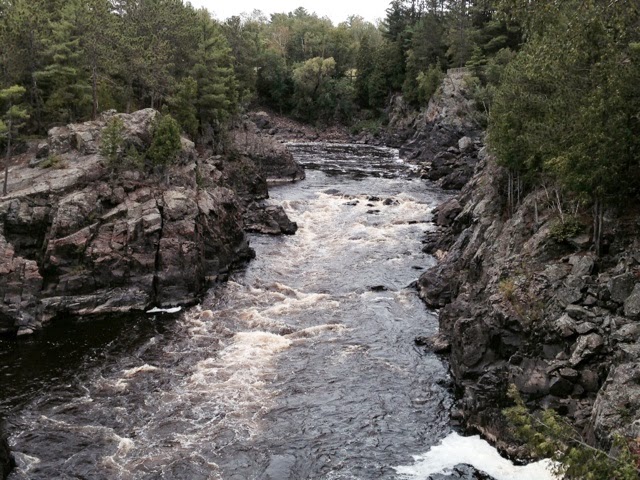 They can kayak several miles down past the Swinging Bridge.
Dinner in Duluth
We met our friends Bob and Ani for supper at the Duluth Grill.  Very nice menu, very good food.  We also checked out a new cooking stuff store at Fitzgers and the new Duluth Trading Co store on Suerior St.  I bought something at the cooking store, nothing at Duluth Trading.  Guess where my priorities are.
Coach Work
We have a new Samsung French Door refrigerator for the coach.  It is in the shop.  Works well, quiet.  It will go in as soon as I can line up some lifters for the removal of the old refrig and loading of the new refrig.  It goes in through a window. Hoping for Labor Day week.
We have a January time slot scheduled at Xtreme Paint and Graphics in Nacogdoches, TX to get the original headlights replaced with high intensity LED lighting (a very popular modification).  They are also going to replace the original outside single step with a double step that is deeper and comes out further (safer). They are also going to add new LED lights in the rear (better visibility over the towed Jeep).  They do some amazing work on coaches.  A fabulous paint job would be nice too. Maybe someday.
http://www.xtremegraphics.net
Ouch!
The headlight redo means they are going to cut off and replace the left and right front corners.  Probably a good thing since just before we got home, a driver who was certainly speeding and probably ran a red light sideswiped the left front corner of the coach as we were making a right turn.  We heard it, a terrible sound, but never felt anything.  We probably weight 10 times what the offending vehicle did. Almost all of this was coming off anyway.  Nothing else on the side or front seems to have been damaged. 1/4″-3/8″ of fiberglass is pretty tough. 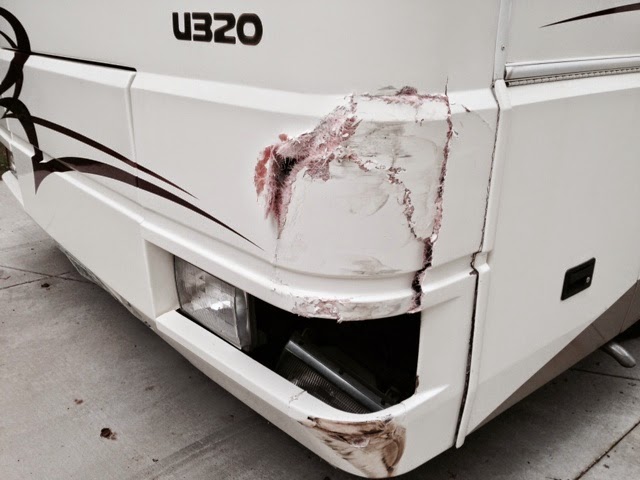 The good thing is that the entire right side of her speeding, red light running, probably cell phone and smoking distracted-while-being-driven SUV from front to back was trashed.  She tried to claim that I ran into her.  Not so according to the two eye witnesses who spoke to the police office.
A little of the handy man’s secret weapon, duck tape, and we will be OK till we get to TX.
Rats!
More later,
Roger and Susan

We are going to try WordPress for blogging.

Well breakfast at the Delta Diner was pretty spectacular.  I had aMexican Omelet.  Susan had a blueberry and marscipone stuffed french toast.  We camped at a small county campground on Scenic Drive about a mile away.  Our site was at the bottom of a hill right at the beach on Delta Lake.  We went swimming in the lake.  Warm and weedy.
We drove over to Duluth.  We were going to meet our friends Bob and Ani for supper.  They were on a bike trip and got home late so that didn’t work out.  We stayed at the marina campground on Park Point.  We had to drive through Canal Park and across the lift bridge. 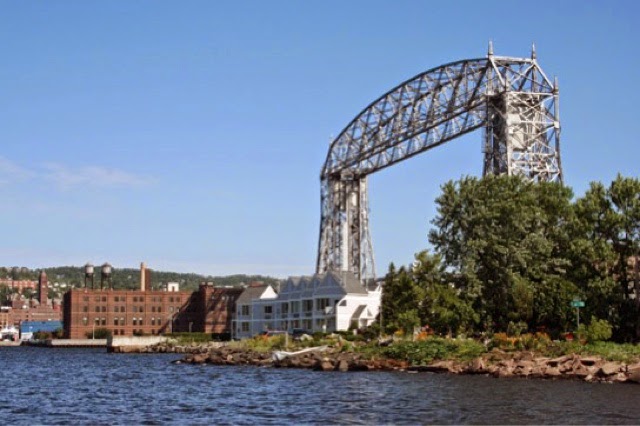 The campground was not much more than a parking lot but it was only two blocks to the bridge and the. Canal Park. 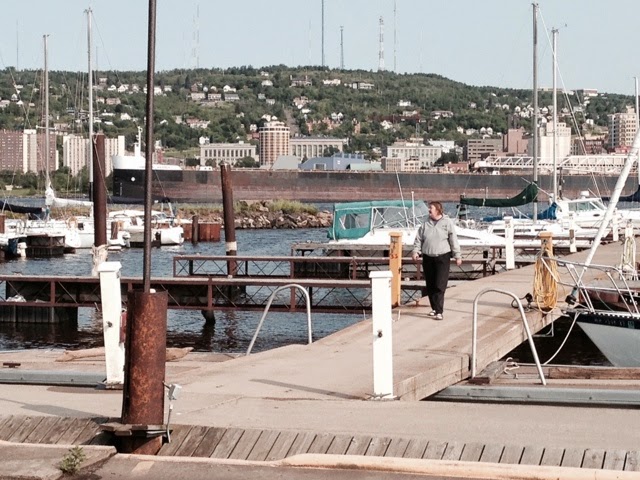 So we walked to the bridge.  Susan wasn’t too sure about crossing the bridge but she did! 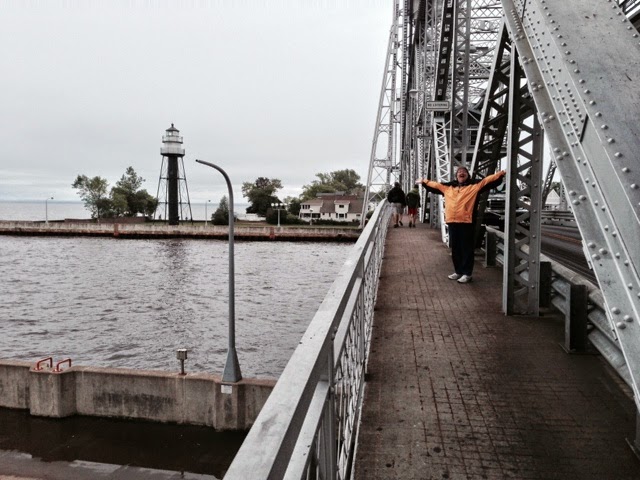 For all the times we have been in Duluth, we had not spent any time on the other side of the ship canal. It is a different perspective. 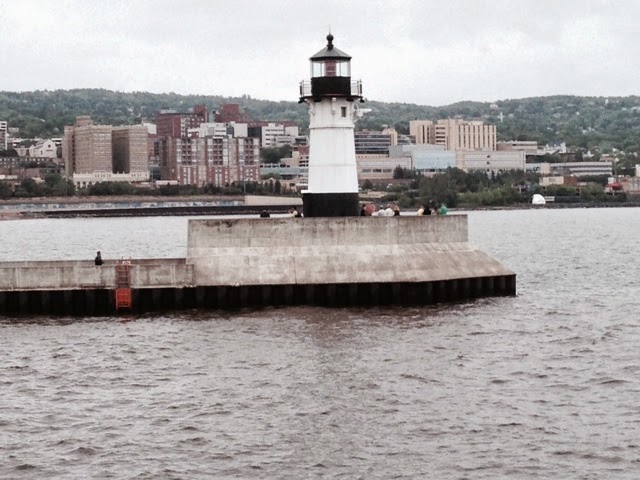 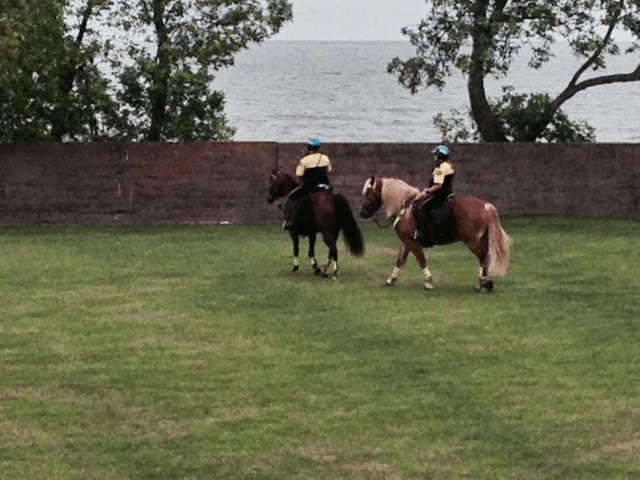 We had a nice visit.  Went to Grandma’s in the morning to get a take out order of Cajun Chicken Fettucini. One order is plenty for the two of us for dinner when we got home.  An easy drive home getting home before rush hour on Monday.
One day off on Tuesday and then five weekdays in a row at Habitat.  Now only two weeks till we are off again.
Busy thinking and planning long winter and summer 2015 trips.
More later.
Roger and Susan