Every year they have a Buffalo Roundup in Custer State Park in the Black Hills of South Dakota. They really are not buffalo but actually bison. And if not that, the never ending hunt for a young boy named Rocky Raccoon who lived in these hills.

A year ago in September, 2019, Susan and I were at a Foretravel Motorcade Club Chapter event in the Black Hills at the Hart Ranch RV Resort.

We made reservations with Ted and Karen while sitting in a burger joint in Custer for September 13-27, 2020 for the Game Lodge Campground in Custer State Park, SD so that we could go see the Roundup. The burgers were good.

Ted and I talked at length about posting our plan on the ForeForums website and in the end we did. Within a couple days nine coaches had signed up to also attend. No planning, no organization, just show up and play. There were coaches comi ng from North Carolina, Virginia, California, Texas and more.

Ted and Karen decided they were going to sell their coach after 13 years full timing ao that they could be closer to their grand kids while they were young (the grand kids) in Ohio. They thought they would get a small travel trailer and still makeit to South Dakota.

Then Covid-19 arrived. Ted and Karen had not bought a trailer yet and decided that had to wait so they backed out. And then more folks started dropping out right up until the last minute. A few more found some time to fill in.

In the end Susan and I were there for the original time. Ed and Debby Wittleder used the first four of Ted and Karen’s Days. Joe and Dottie Allen stayed at a different campground and came to visit, Keith and Jo Newlin drove from Texas leaving Thursday at 2:30 PM and arriving the next day about 8 PM and used 9 of Ted and Karen’s days. 21 hours of driving time in 30 hours. Frank and Connie Willams came for four days from Nebraska, Mark and Bev Cooper came for a week from Colorado.

We were all doing our best to wear masks and practice social distancing as best we could. ‘ We kept meals to ourselves, d rove in our own cars and made the best of it.

Ed and Debbie wanted to go to Camping World because they had a new grill on hold there. It is at the far north end of the Black Hills, a long drive. And then we came back down the Spearfish Canyon for the town of Savoy and had lunch at The Latch String Restaurant, I had a great buffalo (bison) stew. We were gone all day .

Before Ed and Debby had to leave for Colorado Springs we drove about 12 miles to Custer for a burger at the Burger and Bun. We got there after one and got our name on the list. When they sent us a text to say our table was ready it was past 2, the sign on the door said Closed but they let us in, several tables were empty and we had a great lunch. There was no hurry we just enjoyed it.

So much so we went back with Keith and Jo for Keith’s 60th Birthday. This time we got in before closing and felt a bit uncomfortable. Very few masks anywhere. But we enjoyed our lunch. Keith had a buffalo (bison) burger. We stopped at the local grocery store and got a chocolate cake mix, white frosting and ice cream. On the way home we stopped to get an LP tank filled.

Later that afternoon Susan baked a two layer chocolate cake with white frosting for Keith. We put six candles on it and ate it while sitting around the camp fire (propane fire pit) that evening.

In the morning of the day Keith and Jo arrived I got out all of my fishing gear and went up the Grace Coolidge Creek into the Grace Coolidge Walk-In fishing area. The stream runs down a canyon for about three miles and there are five small dams built in the 1930s by CCC workers to make small pools. The stream is stocked with trout each year.

I walked up the trail which was more like a rugged road to try my luck at each of the first three pools. It was good that the trail was well defined because there was poison ivy everywhere. It was easy to spot as its leaves had started to turn bright red. Danger! Danger!

I tried for three hours, no fish. My technique is OK I think, just the wrong bait.

A couple days after Keith and Jo arrived we had a day off. They had driven to Sturgis the day before and they needed it.

The campground host had driven by and talked to Keith about fishing in the ponds in the campground. These were all part of the Grace Coolidge Stream. He suggested some yellow/green/orange powerbait baits, He gave us some to try. They were like firm foam balls about 3/8″ in diameter.

It turns out there are different sizes, shapes and flavors for all sorts of fish. What happened to worms?

So we put on a #4 barbless hook on the line and a small weight about 18″ from the hook. Keith started out with a slip bobber. I just cast the line out and slowly reeled it back in.

I started out right along the dam. My second cast and a bite! I reeled it in, a gorgeous rainbow trout, about 9 inches long. Good thing I had a proper fishing net.

Pretty amazing. And in just five minutes I had another. Keith moved over to the next pool. He caught five, returned two to the pond. We had fresh troug for lunch. 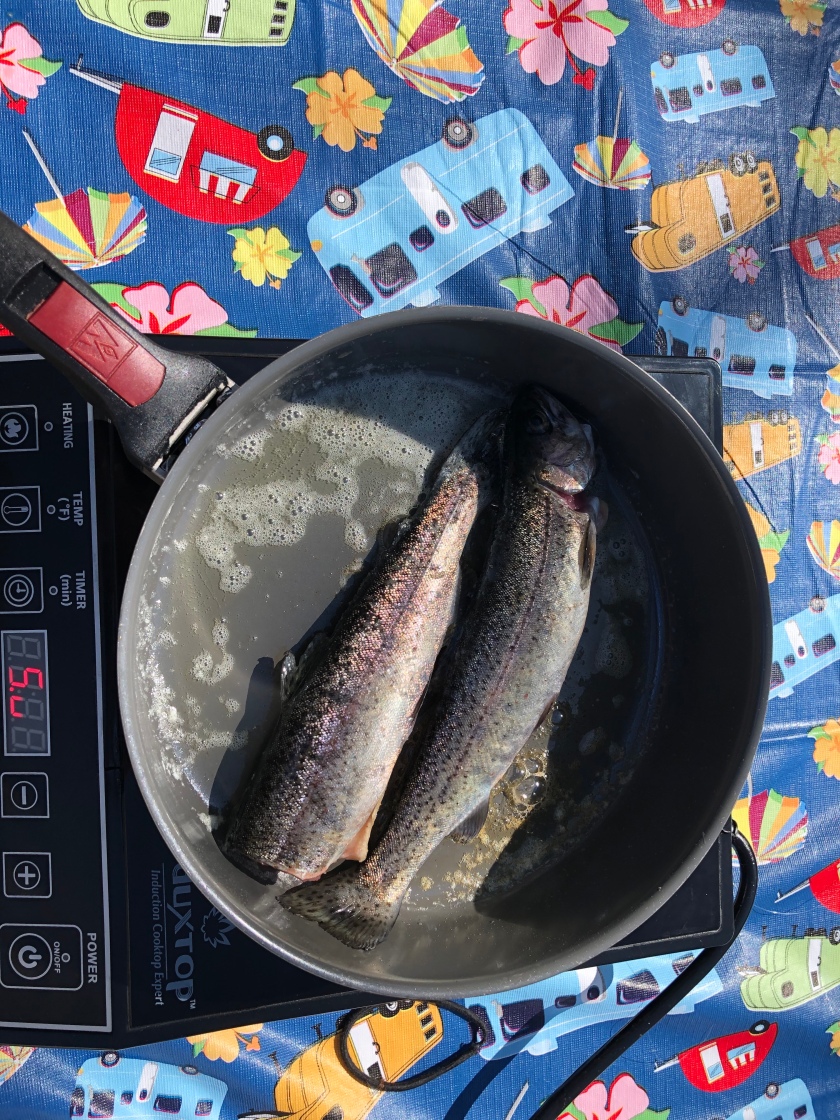 There is a Wildlife Loop drive around the south end of the park.

It runs from the Game Lodge Campground on the east side to the Blue Bell Entrance. The south part of the park is more open grass land and the 18 mile drive gives most drivers a chance to see wildlife, thus the name. We drove it a couple times and didn’t see much. I think the bison were all back in the small valleys and hidden areas getting ready for the Roundup.

There are unpaved roads that cross from one side of the wildlife loop to the other. We followed the Fisherman Flats Road as far as it went. It really wasn’t flat at all at the end, just at a high parking area above the French Creek valley.

We did see a prong horn antelope. 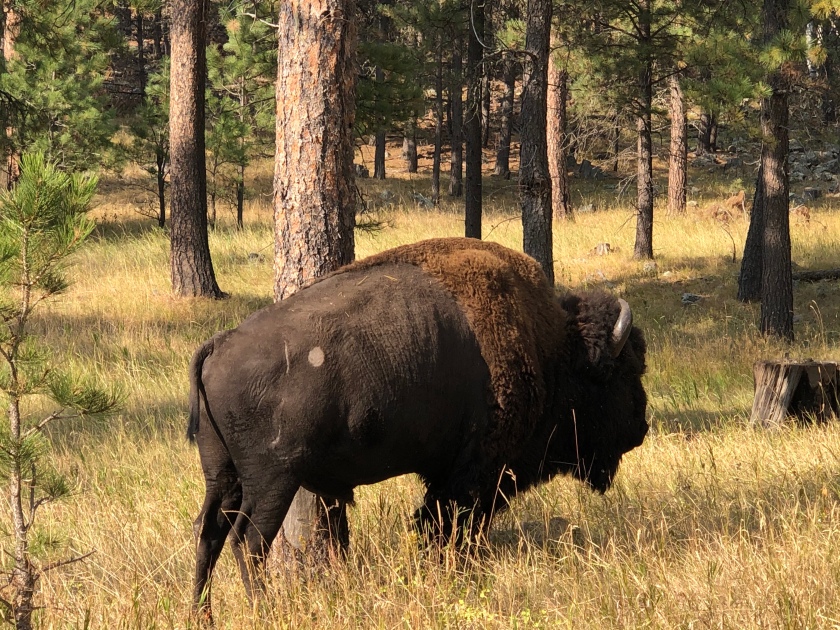 And. Bison or two.

We backtracked a bit and followed the Swint Road to the North Lame Johnny Road to the French Creek Horse Camp.

When we crossed the French Creek we were met by fishing people. 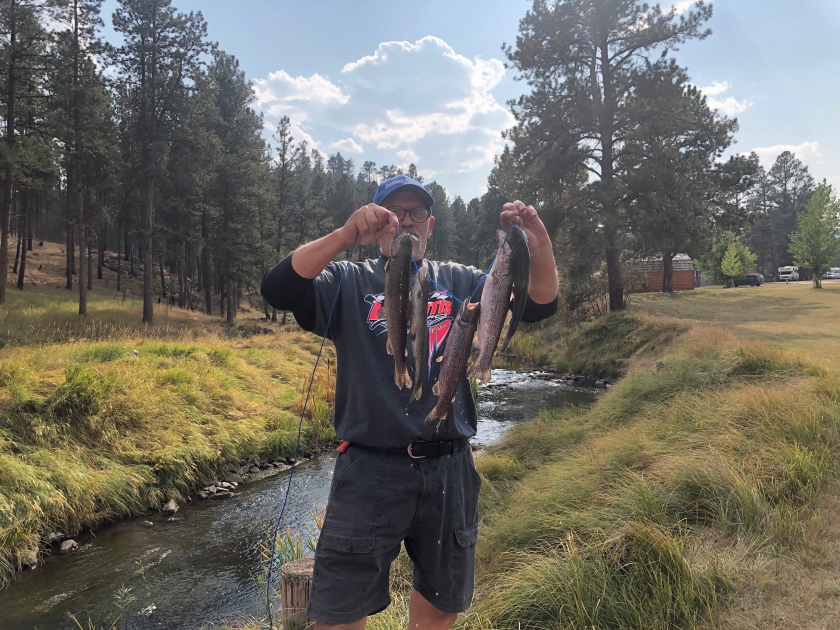 That might be a good place to try for more fish. There were lots of horse trailers and horses in the campground. Lots here for the roundup.

On the way back toward Legion lake we came across another bison directing traffic. 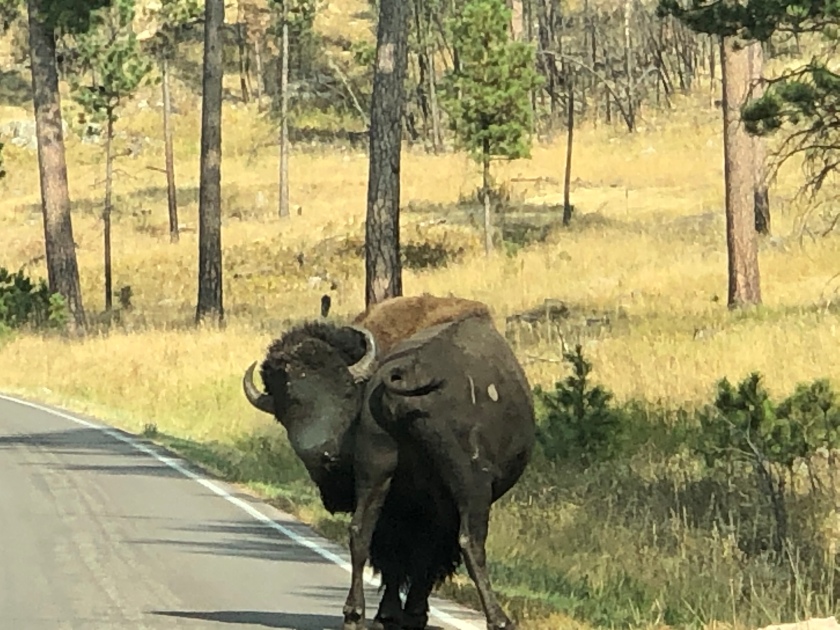 He caused quite a stir and a bit of a backup.

In order to see the Buffalo (bison) roundup we got up at 4:30 AM and left for the Buffalo Corrals at the south end of the Wildlife Loop. There are two viewing areas, a north side and a south side. They were really east and west of the Red Valley Road and south of the Wildlife Loop road. We drove in the Wildlife loop from the Game Lodge Campground loop. Only a few minutes and we caught up to the traffic.

The line of cars wound along the loop to a parking area and then we walked to a hillside where hundreds of people were already set up for the three hour wait.

We were masked up unlike most of the others who were buying into the maskless madness that seemed to infect South Dakota.

There was a big tent where you could get a pancake breakfast, two pale looking pancakes with a couple of sausages, $10. We passed. Long sleeved T shirts too, $36. We passed.

The sun was up.

And bison came over the far hills.

And down through the tree line.

The horse riders and pickup truck drivers moved them north into the sorting corrals.

Once there they drank water, ate grass and calmed down for an hour or two. Then the sorting began. Before that the exodus got going in earnest.

It took 30 minutes to get from where we parked to the Wildlife Loop road. Then another 30 minutes back to the campground. Then a nap.

If we had it to do over we would leave a couple hours later. It wouldn’t make much difference where we got to sit to watch the round up and the car would be much closer to the exit to get out.

There were many fewer bison than we expected. The herd size in the park was reported at about 1600 and they wanted to get it down to about 900. All that we talked to who were there estimated the roundup herd at maybe 400. Not sure where the rest of them were.

Keith and Jo were up and ready to leave at 5 AM on Sunday. He discovered a leak in one of his slide seal bladders. Some duct tape was sufficient to get the slide in for the trip home. They drove more than 12 hours on Sunday.

We left at a much more reasonable 9 AM and drove about 7 hours. We changed time zones and lost an hour. We stayed in a small community campground overnight. Next day we stopped in Albert Lea for fuel and got home by 2 PM.

Keith and Joe got home just an hour or two after we did and they drove twice as many miles.

And like every time we get home there is the moving out and in. We had to get the coach ready to wait for a while until we leave again, get some service done, winterize the water systems.

And life at home resumes in a time of pandemic.

We are doing well, staying safe as best we can, stocking up for the next wave,

We hope you all are doing well too.