It was about an hour from St Augustine to Huguenot Memorial Park East of Jacksonville. These were French folk during the time when the Spanish were at St Augustine. The Spanish came up to Fort Caroline (near here) and massacred the French. Thus the Memorial Park. We are right on the St Johns river and there be ships! 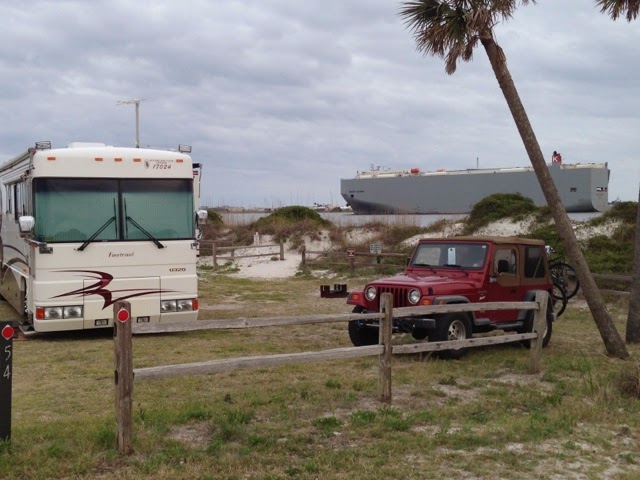 They are maybe 200 yards away. These are big ocean going ships. The ugly gray thing in the background is a car carrier.
Nearby is a National Park site. The Kingsley Plantation was about 1000 acres of Sea Island cotton.  Established in 1814, Zephaniah Kingsley brought his wife and three children to this remote Fort George Island area. His wife was African, a slave he bought in 1806 in Cuba. He freed her and their children in 1811. She was his business partner and managed the plantation. She became a plantation owner herself as well as a slave owner. Some 60 slaves worked on this Kingsley plantation. When Spain lost control of Florida to the US in 1821 the laws quickly changed the status of free blacks from the Spanish system to a repressive system under the US. By 1837 Kingsley had moved his wife and sons as well as 50 freed slaves to Haiti, a free republic. Their two daughters remained in Jacksonville and married wealthy white men. Kingsley was a very wealthy man. He owned 8 plantations and over 32,000 acres of land and 200 slaves  He moved to New York City and died in 1843 knowing his family was secure. 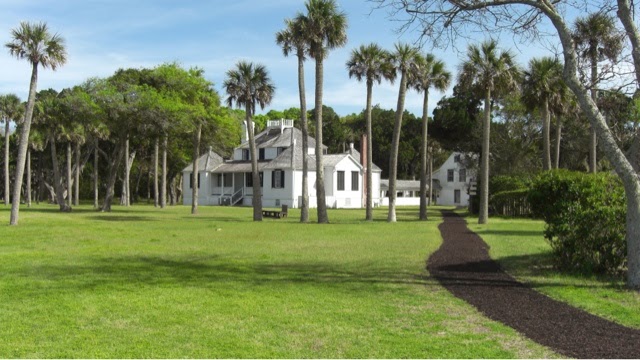 He built an interesting home on the Fort George River complete with a basement and a widows walk. It was designed to take advantage of the ocean breezes. It is very hot and humid and buggy in these coastal Florida island during much of the year. From the widows walk he could see out to the open ocean and out over his plantation. This is the oldest plantation house still standing in Florida.
There were barns and other kitchen buildings. Slaves did all the work and lived in small houses they had to build for themselves. 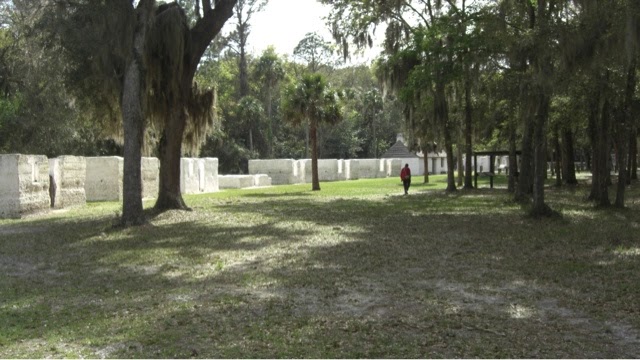 These are mostly in ruins now but stabilized. The information provided told about the harsh and difficult work life the slaves were subjected to and how the community they had outside of work sustained them.

After Kingsley’s death the Fort george Island plantation was sold to his nephews. They and their descendants continued to operate it until about 1900 when the island began to revert to forest.

The roads into the plantation are bumpy dirt roads overhumg with Live Oak trees and Spanish moss. 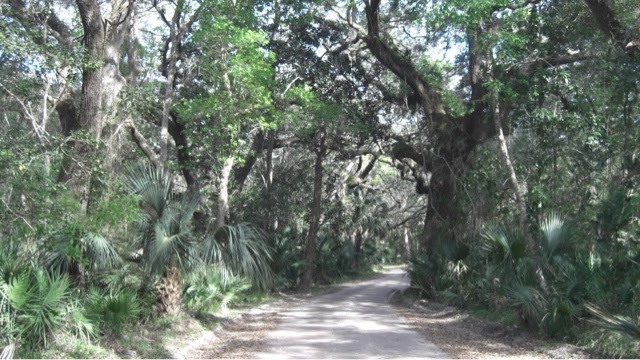 We got back in time to see a parade of giant ocean ships going out and coming in. The Mayport Naval Base is just across the river. There are several big Navy ships there.  The helicopters were flying continuously practicing something. Tha Navy base has a very nice RV park for active duty, reserves and retired military folks.
Thursday, March 27, 2014
Today we drove a short way to Amelia Island. The southern half of the island is dominated by golf courses, luxury resorts and extrodinary estates. We drove by them. The northern end of the island is the town of Fernandina. Now this is what we were expecting an old historic Southern town was going to look like.
Of course there are beach homes and resorts but not like the other end of the island. Most of these looked like they have been in families for generations like cabins “Up North.” The historic district was maybe a mile square. The main street (Center) was several blocks long and had the majority of the small local businesses. 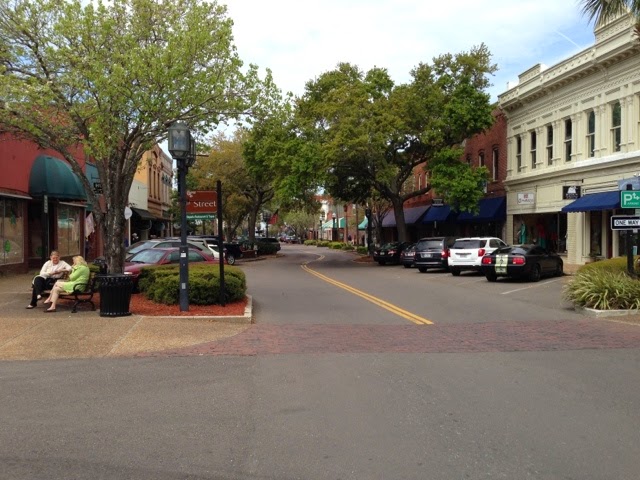 The post office, the court house, one of the oldest churches in Florida, a really cool bar that looked like it came right out of the 1800’s all were right on Center St.  At one end was the train station and the harbor on Front Street.  So at Front and Center we had a nice lunch.

The court house was pretty neat. 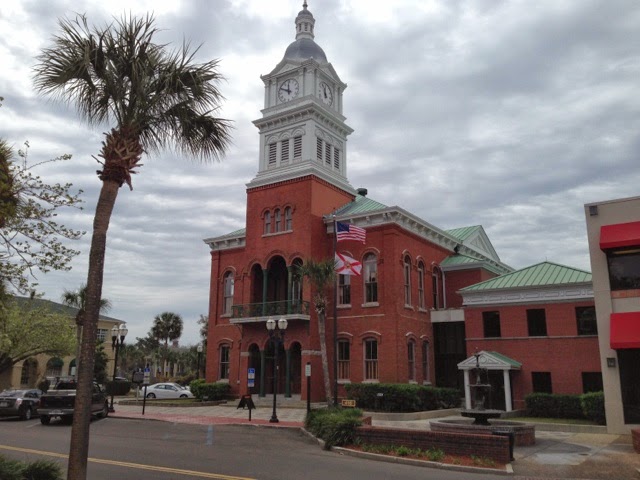 We went in and visited the court room.  Right out of “To Kill a Mockingbird” 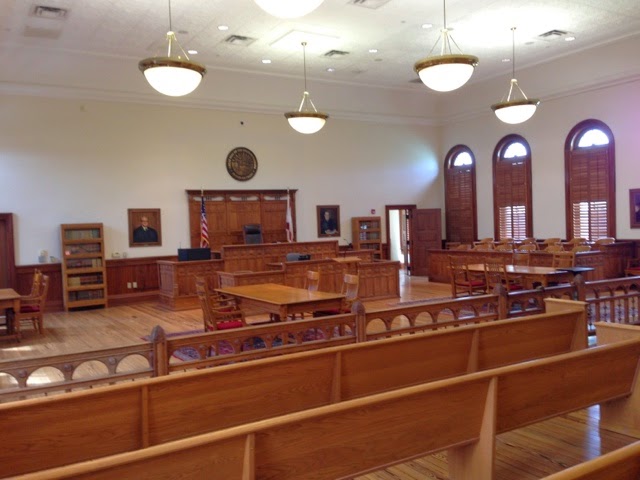 There were a stunning collection of beautiful old homes as well. 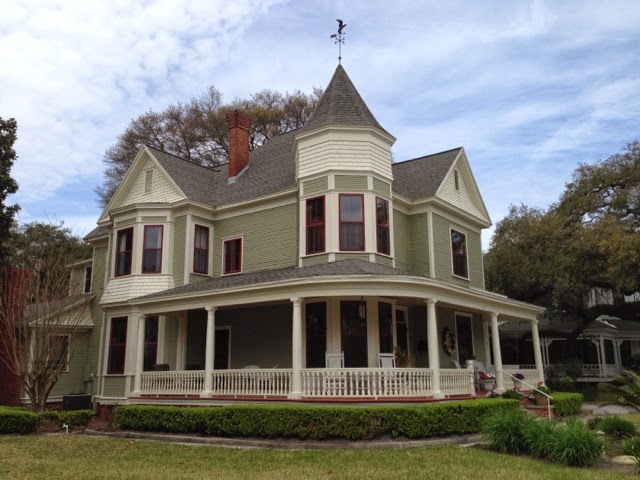 We liked this one.  Pretty much matched the colors on our St Paul home.
We got back to our campsite in the late afternoon just in time to see a monster cruise ship come by. It is amazing to watch them come down the winding river getting bigger by the minute and the go out to sea. 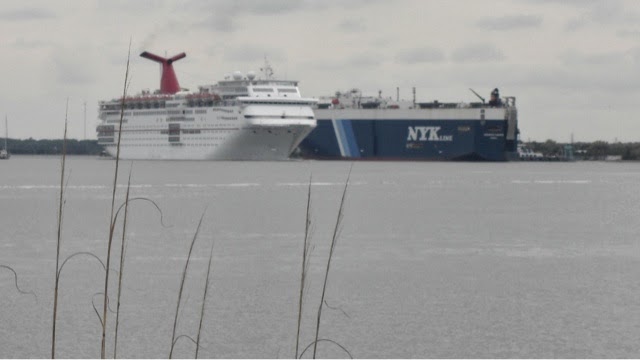 A car carrier going up stream and the party boat coming down, tooting at one and other.

Every boat coming into or leaving the port is handled by a Port Pilot.  A small boat takes them out to the incoming ships and goes out to pick them up as the shipes head out to sea. 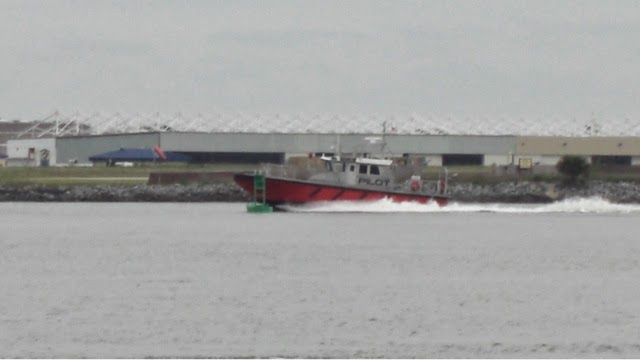 This is one of the really interesting things about traveking the way we do. This park would never come up on any normal travel plan and yet here we were seeing the traffic in and out of a major seaport, a charming old historical city on what anyone else would just consider a major resort island and witnessing a complicated and disturbing part of our history as it was 200 years ago.
We may be driving right by some of the guide books must-see things on our way to see what we discover for ourselves. That is fine with us. Those following the crowds aren’t seeing any if this.
Tomorrow we head for Tybee Island and Savannah, GA. Should be nice.
OBTW.  Checking miles traveled and days gone on this trip.  We are averaging just under 70 miles per day, right on our target.  Susan and I traveled for about 10 months in 1980 and our average over that entire time was about the same.  Gas was very expensive then.  Our average daily fuel expense today is less than it was in 1980 making adjustments for inflation.  Our coach and Jeep weigh 5 times what our van did and we have much more room and comforts.
More soon.
Roger and Susan