So why is this one a valley and not a Cove.  Beats me. Cataloochee Valley is in the opposite (NE) corner of the Great Smoky Mountains National Park. From Cade’s Cove it is about 100 miles by road not so far as the raven flies.

Cherokee People
One of our side trips into Cherokke took us to the Museum of the Cherokee.  It was a very impressive museum that followed the history of the Cherokee people from their stories of creation through the thousands of years prior to Europeans first arriving and then their story after. Their stories told of a great bird who flew across the land.  With each upbeat of its wings it pulled up the mountains and with each downbeat formed the valleys.  There was a great fire and the bird flew into the fire and used its powerful wings to put the fire out. In the process of doing so its feathers were singed and blackened. And that is where ravens come from. The first Europeans were the British and they got along with the Cherokee. They brought iron tools, guns and disease with them. The diseases killed half of all the Cherokee people within just a few years. The British were respectful of the Cherokee and established trade and treaties that were beneficial to both. After the American Revolution things changed. The Americans decreed that all indians had to be civilized and forced to behave like the Americans thought they should. This didn’t go over so well with the Cherokee or any other Native American group so there was resistance. The Americans sent in an army that massacred half of the remaining Cherokee (including women and children) and round up the remaining Cherokee and forced them to walk to a flat, treeless worthless reservation in Oklahoma.  Half of all the remaining Cherokee died on this forced march through the winter on the “Trail of Tears.” These stories are repeated over and over across America as our ancestors forced Native Americans to give uo their land, their culture, their families, their language and their way of life to live virtually imprisioned in concentration camp like reservations. While there is much to be proud about being an American this is not one of them.  Many Cherokee escaped that original round up in what is now the Smokies and stayed here in the mountains. They are now the Eastern Band of the Cherokee Nation, a proud people, restoring their culture and language and building better lives for the future.
Cataloochee Valley
We drove from Cherokee across the southern side of the park to the road to Cataloochee. It was a 1 1/2 lane wide steep very twisty road up into the mountains about 11 miles. Apparently they have never heard of guard rails here.  No shoulders on the road except for nearly vertical tree coverd slopes where a car would certainly not stop for thousands of feet while to crashed down the mountain.  Susan closed her eyes and held of for dear life. I just hoped there would be a little extra room when we met a giant anything coming down. Anything bigger than a squirrel would have been too much I was sure.   And then the pavement ended. Another four miles. Up through a “gap” (as they call a pass when it suit them) and then a precipitous down hill, brake and low gears challenged, Susan nearly pulling the Jeep grab bar off sort of thing. The screaming was silent. The road narrowed, the switch back turns sharpened. What good was at the end of this? And then we met up with four testosterone enhanced pickup trucks hauling fifth wheel type horse trailers each big enough for four horses. Luckily we had right of way or just took it and we squeezed by.  I have no idea how they got in or expected to get out. There was another way braching off of this road to the east that they may have taken.
Finally we got to,a three mile paved section!  How did they ever get that equipment in here? It led down a fairly steep long downhill to the campground iand the valley. I supposed the paving might have been less costly in the long run than the constant maintenance of a gravel road.
We stopped at the campground to check it out.  There was an older couple there in a smaller motor home with a tow car that had come in the same way we did.  They we glad they were going to be there for a few days to muster up courage for the drive out.  We had a nice lunch and chatted with the campground host, a volunteer.
Cataloochee is a much smaller valler than Cade’s Cove and yet in 1900 there were more than 1000 people living here. The forest has retaken quite a bit of the valley as it advances from all sides. Farms were smaller. But there were schools, homes, barns, blacksmiths shops, a mill, a saw mill and most everything they needed to be self sufficient. 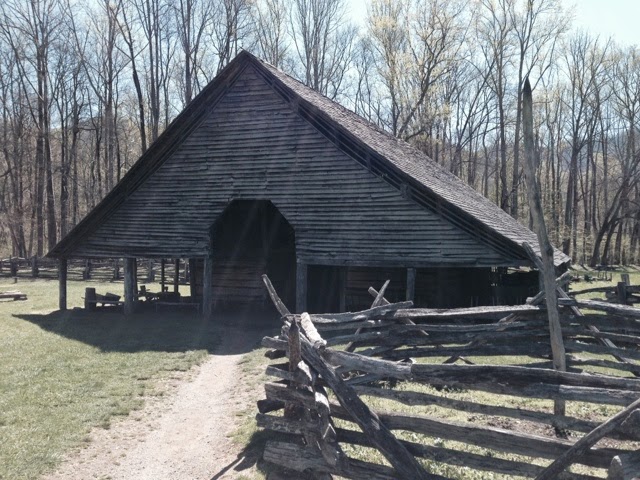 This is a typical barn. The core is made of logs.  The roof is much bigger with broad overhangs to shelter animals. 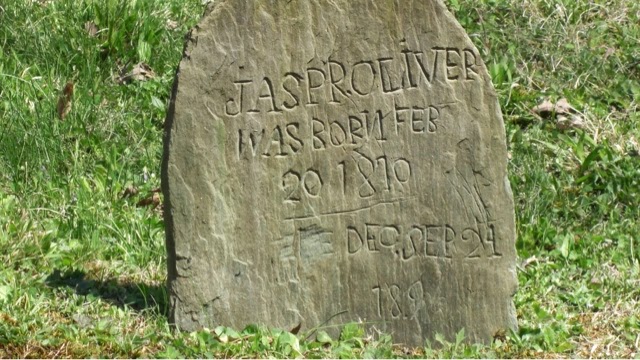 We found a small cemetary. It had some interesting stone markers. 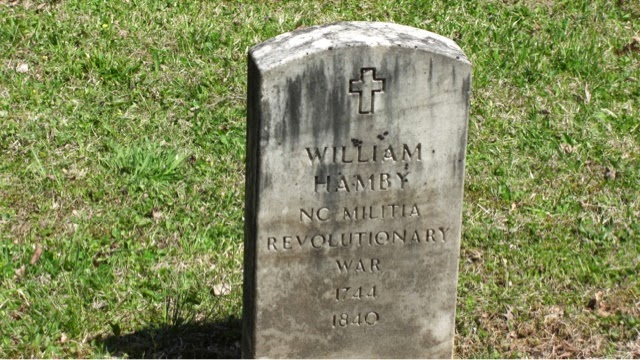 There was another proclaiming a man murdered by the southern rebels. It was very common in this part of NC that families, neighbors and communities were split by issues and loyalties during the Civil War.
One other route we wanted to check out was the Balsam Mountain road.  Unfortunately while both ends were open the middle section was not yet open.  We got as far as we could crossing a really old bridge only to come to the closed gate. 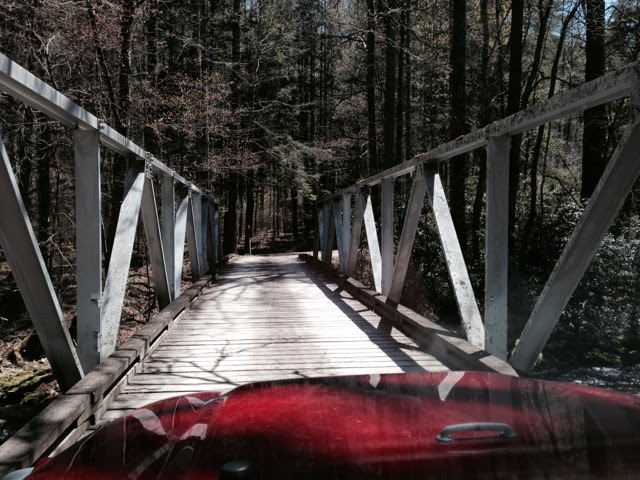 So a week in the Smokies.  Lots more to see, maybe another time.  Another Foretravel owner was at amn RV park on the north side of the Smokies.  We tried to figure out a meeting time but we were both leavimg the same day about the samr time heading in different directions. The next morning as were left the Smokies heading west across the north side we sam him heading east.  We waved.
On to Oak Ridge, TN.
A story for another day.
Roger and Susan