We left Colter Bay with some reluctance but were looking forward to Oregon. We drove south through Jackson and along the Palisades Reservoir toward Idaho. The interstate from Idaho Falls loops down and back up through Mountain Home where we stopped for the night at Camp WalMart. It was a long day on the road with another one ahead across Oregon to Sisters.

The next day it was US Highway 20 from Ontario on the eastern Oregon border to Brothers to Bend to Sisters and an hour gained to Pacific time. A winding hilly way to go, two lanes mostly, some with reasonable shoulder space most without. Reports of massive wild fires in Washington and central Oregon kept us thinking about what was ahead. There was a huge fire just west of Sisters with evacuation orders and smoke warnings. We called ahead, the city campground where we were going to stay said no problem. So off we went.

Eastern Oregon was very dusty and hazy and the further west we went the dust became smoke. By Bend it was really quite thick. By Sisters, well the campground spokesperson was a bit optimistic. While the evacuation orders had been lifted no one told the smoke.

I am reading a book that takes place in England during WWII. The refugees to the countryside called London “The Smoke”. Here we were.

In spite of the smoke the campground was pretty full. Just down the road there was an “Incident Center”. Dozens of tents set up for fire fighters, equipment tents, food prep and eating tents, showers, fire trucks, busses and more. Organized chaos.

In town a Forest Service person had a big bulletin board along a sidewalk with fire maps and information. At that time the fire was only about 10% contained in three major fire areas and less than 7 miles west of Sisters.

At a Sinclair gas station they were doing their best to keep a sense of humor.

A solar eclipse and now this.

We spent some time in town, it is about 8 blocks long down main street. We found a place claiming great fish and chips and they were. At the other end of town we got the Jeep washed.

That evening the sun was an odd color as it was setting. 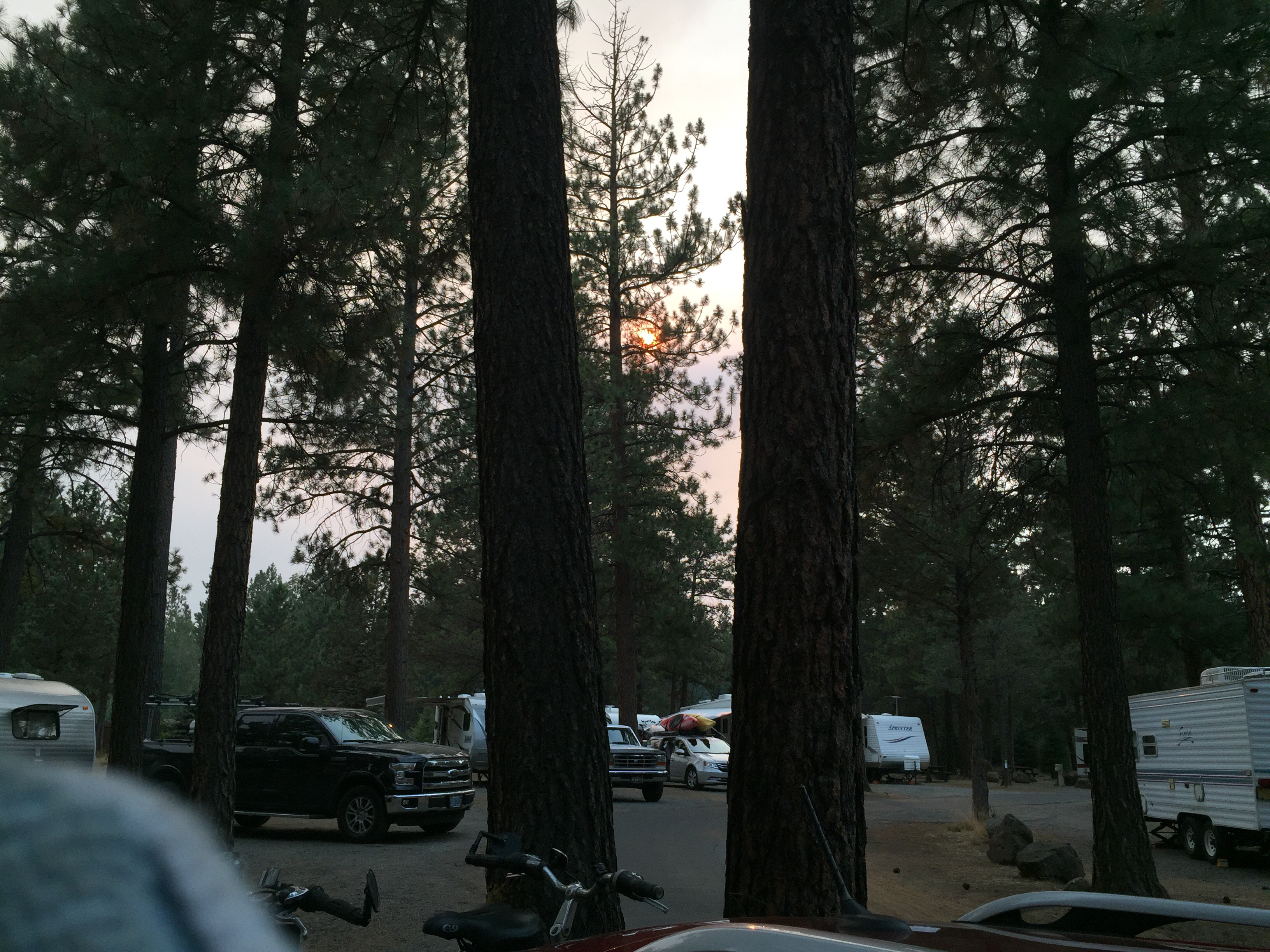 A lot more orange than usual.

In the morning the Jeep was dusted in a white ash layer, the awnings too. We connected the Jeep and headed off to Crater Lake. And more smoke.