We have had many close encounters with Crater Lake NP over the years but never quite close enough. It is out of the way no matter which way you go. So a destination it has to be as it was on this trip.

From Sisters we headed sort of SW over rivers and mountains and through woods and more and more smoke towards Crater Lake and Collier Memorial State Park. There is no camping at Crater Lake so we chose Collier for a couple nights. It is about 40 minutes from there to Crater Lake.

Collier Memorial State Park was another nice Oregon park. The sites were big and easy to get into. It was in a big tree forest with a nearby river and a logging museum.

You have to walk up along side this small river and under the bridge to get the the logging museum. This bridge was recently built to modern standards but closely resembles the original bridge with the walkways underneath. The path lead to another footbridge to the museum. 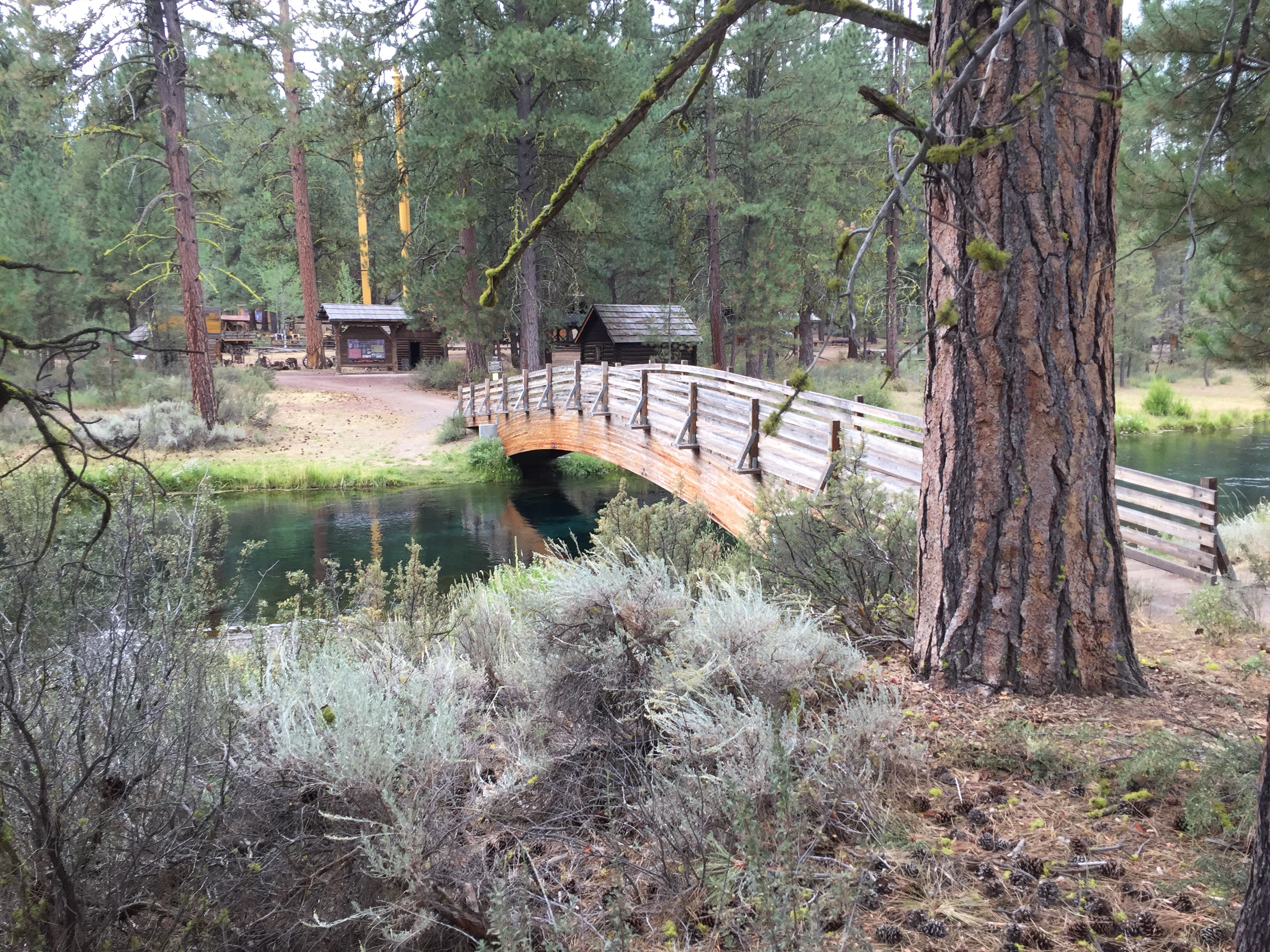 The museum is a collection of old buildings from the surrounding area moved here so that they could be saved and a large collection of old logging equipment loosely organized by time. Most of the logging equipment was derelict. There was a steam operated stationary machine that looked like it might have been for removing bark, something that handled logs sideways. No signs or anything to describe it.

And this scary thing, a whirling arm remover I think. Almost all stuff was transportable from one site to another. Some was stationary for cutting logs into timber. The logging industry in Oregon today is mostly aimed at processing smaller logs, 16” or less into lumber. Almost anything bigger has to go to lumber mills in California or gets trucked to ports and loaded on ships for overseas markets.

The drive to Crater Lake goes up. Only 7700 years ago this was a 12,000 ft high active volcano, Mount Mazama. For hundreds of thousands of years lava flows had built this mountain, glaciers had formed and scoured its sides and it was surrounded by vents in the sides of the mountain. Its magma chamber grew to a huge size and pressure. A massive eruption began mostly through the side vents. As the magma chamber emptied the mountain could not support its own weight and collapsed forming a deep caldera. Over time the caldera filled with water from rain and snow. Nothing flows into the caldera a only evaporation, seepage keeps the lake level where it is today, about 1000 ft below the rim of the caldera and almost 6,000 feet below the original summit of Mount Mazama. Crater Lake is the deepest lake in the US, 1943 ft deep. It averages about five miles across and holds almost five trillion gallons of water. (4.5 cubic miles of water). It is hard to imagine that much water but that is about how much water would fall if the entire state of Minnesota got a 3-4” rainfall.

This is what we could see from the Crater’s edge. 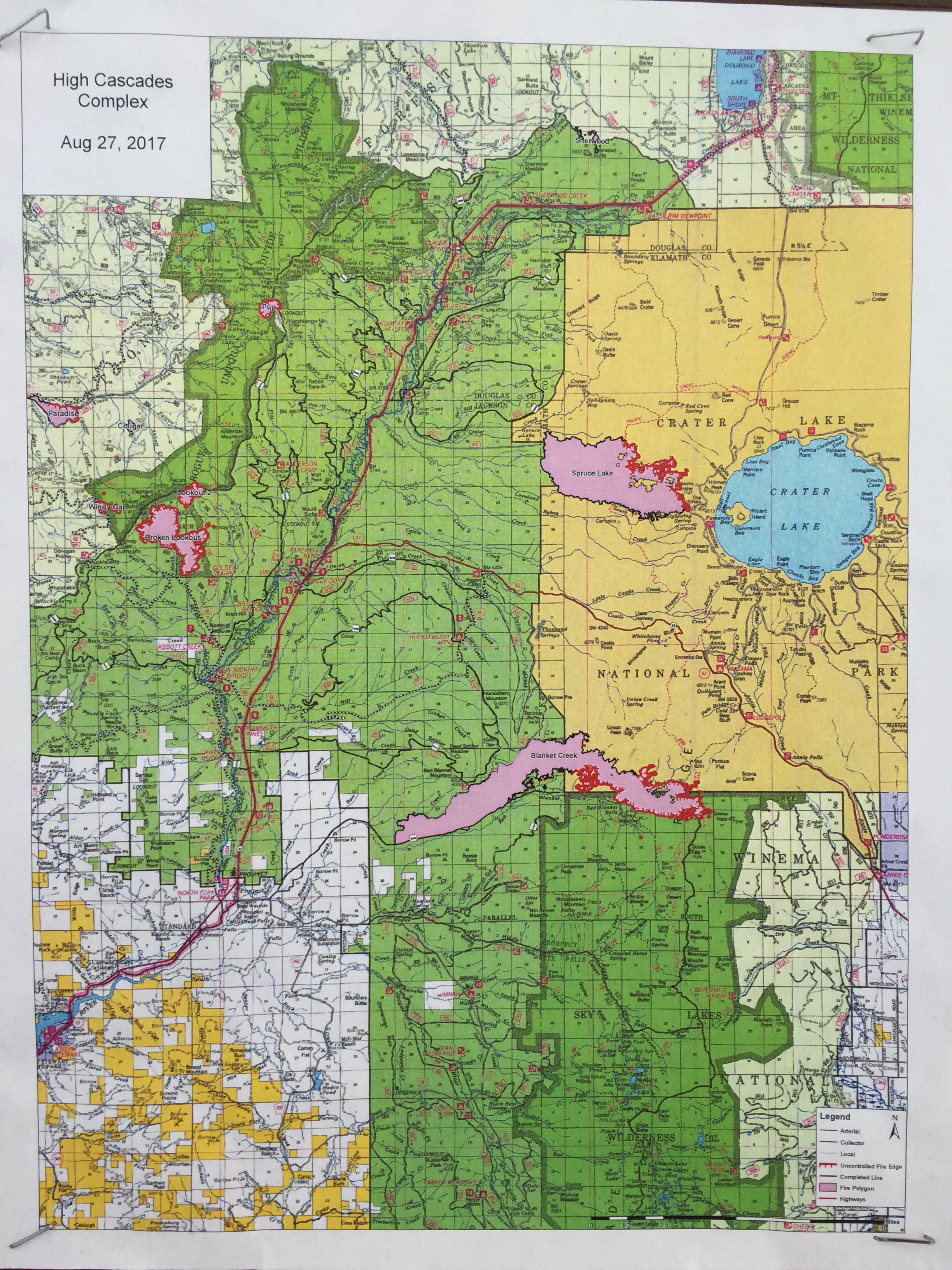 The red areas show the High Cascades Complex fire. The Spruce Lake fire was only a couple miles west of the crater. That part of the road around the crater was closed. There were lots of fire crews all over. 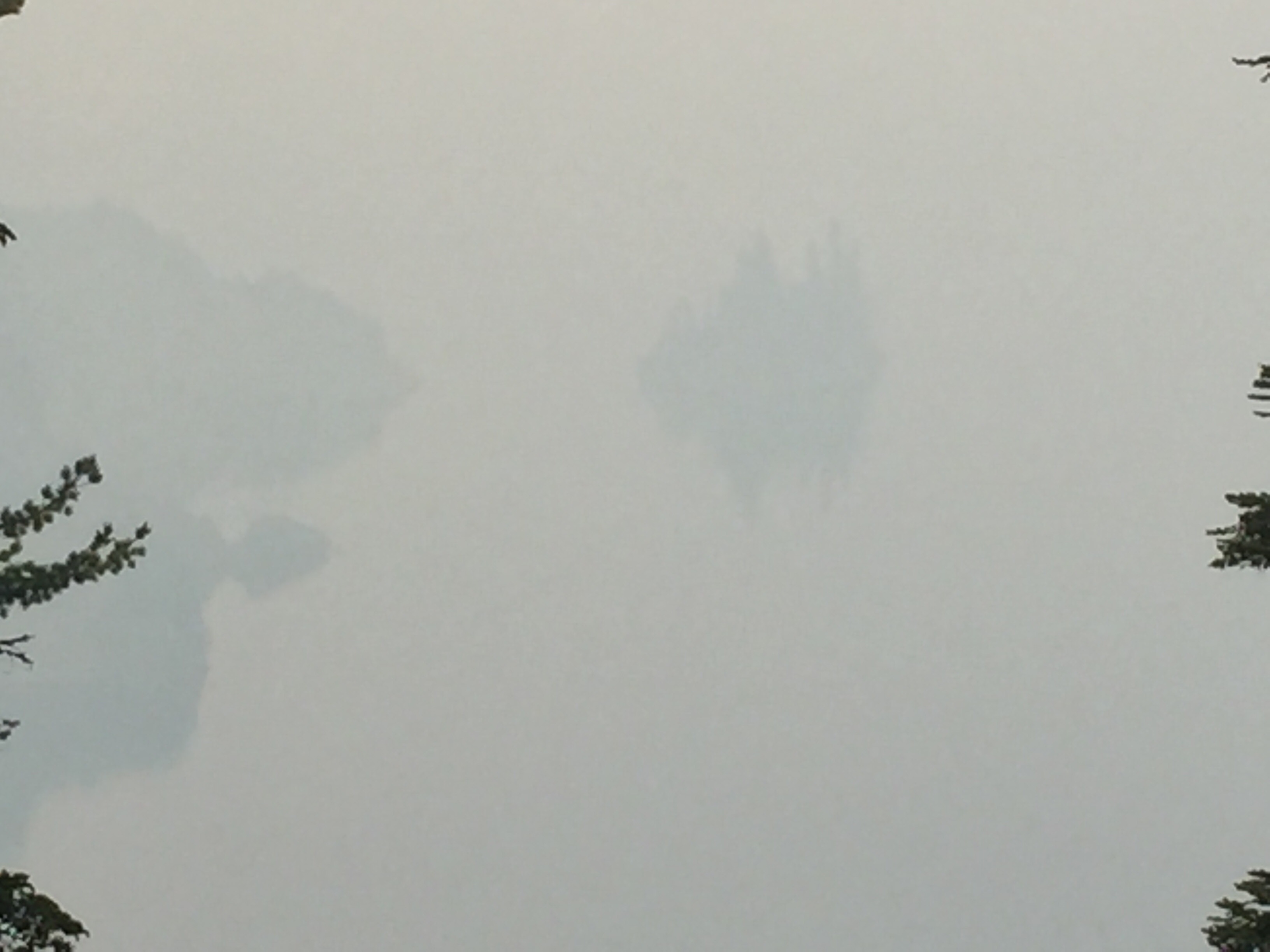 If you look closely you can see a small island named Phantom Ship that looks like a sailing ship (that is what they said anyway). It looked like a phantom alright. The smoke was really thick up there.

There is an inviting looking lodge at the rim. There was a comfortable sitting area and a nice dining room. 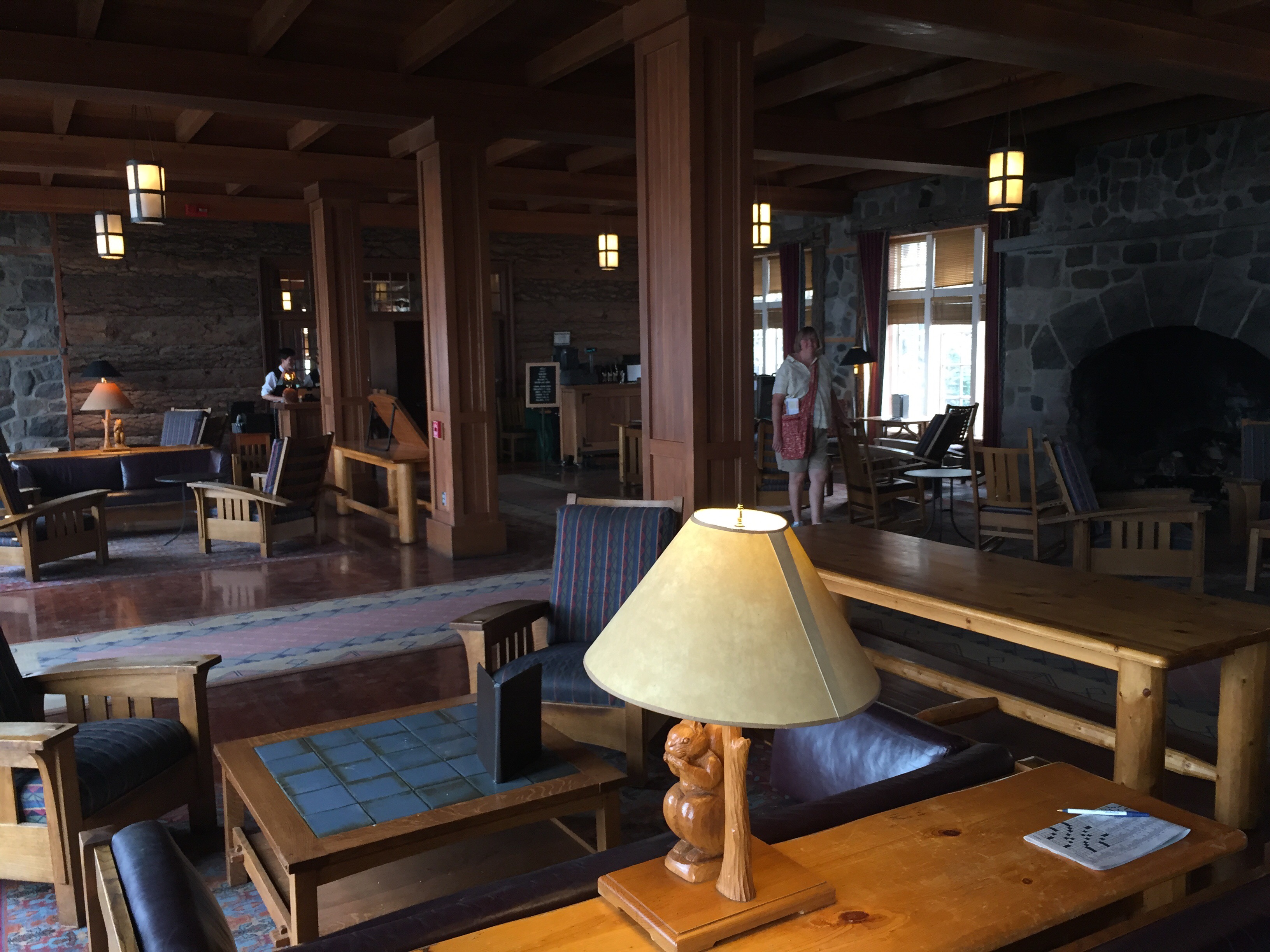 And of course, a gift shop. 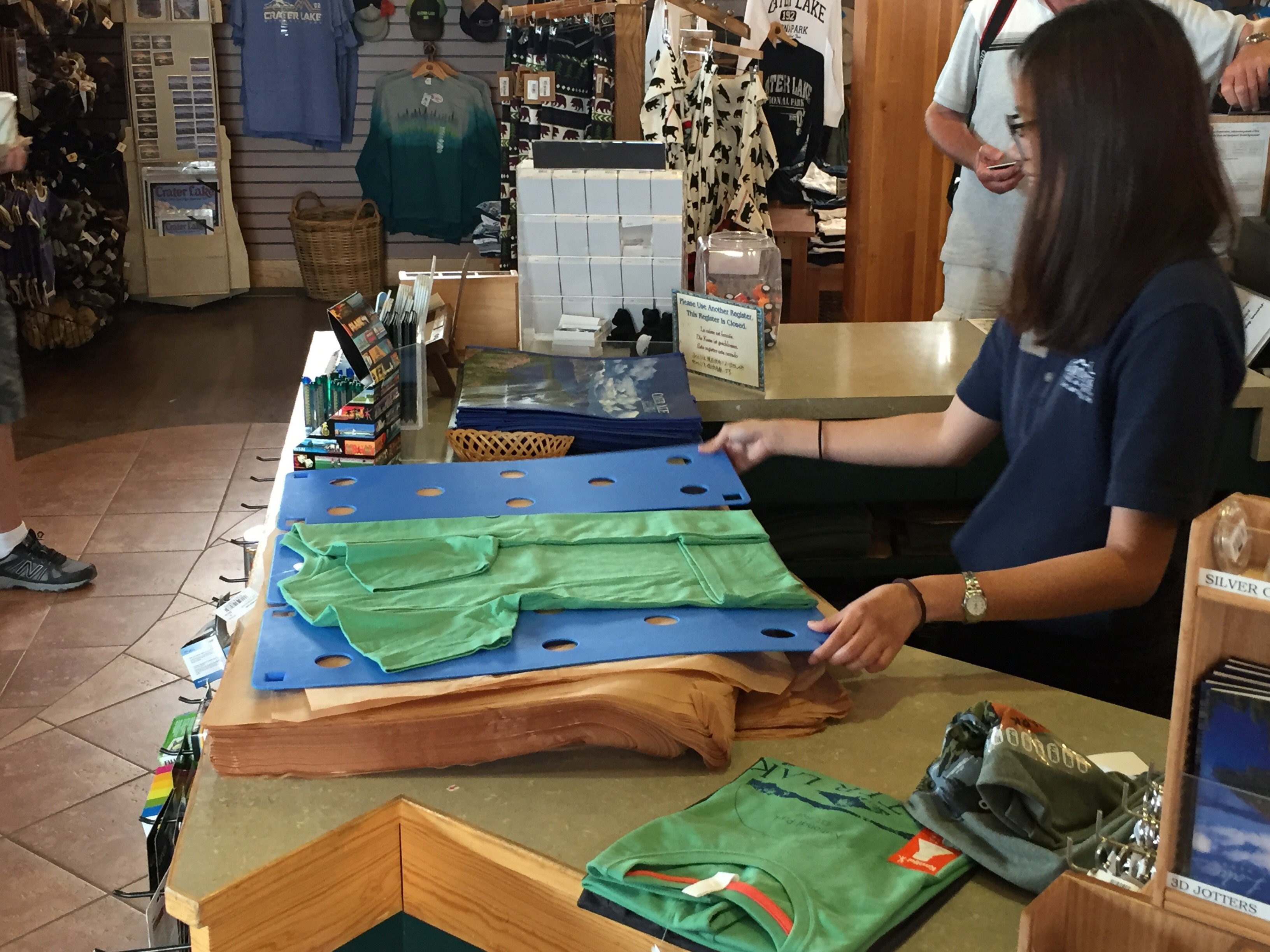 I commented to the young lady folding t-shirts with the “Sheldon Folder”. She was clueless as to what I meant. I tried to explain but she said she had never watched “Big Bang Theory”. Too much YouTube I guess. Or foreign students working for the summer, that seemed pretty common. But she was pretty good at folding shirts. We bought a Crater Lake NP patch to add to our collection.

Next, on to the southern most coast of Oregon and even more smoke. We have to loop down and back up a bit in California. So at least we can say we went to California in the coach.