The table that came in our Foretravel was shaped like a football with the pointy ends clipped off.

This is a picture of the original table that the former owner sent when we were looking at the coach. It has a slide mounted on a fixed pedestal that lets you move the table toward the seat cushions or away. The thinking behind the curved edges was probably to make it easier to slip in behind the table and to provide a bit more clearance between the table and the kitchen when the slide was in.

It worked OK but was really crowded if you wanted four for dinner. We had seen a couple with rectangular tables of various shapes in this location so we decided it was time for a change.

As we do for most projects like this, the first step is a cardboard cutout in the shape and size we thought would work. A cardboard model is easy to shift around for placement and easy to trim as needed.

Then we went to a 1″ thick foam mockup. This added a thickness dimension. Some final trimming and we were ready to go.

The plan was always to make a cherry table. Cherry is in limited supply in my shop and we wanted to make sure it was going to work. I had plenty of black walnut on hand so I made the first version out of it.

Here it is in place. The coach sure looks different from the original pictures, much more colorful, much more ours. The walnut table looks quite dramatic.

This version slides in closer to the cushions than the football shape and, in the center of the table, had more clearance between the kitchen and the table. It is black walnut with breadboard ends and black pegs. 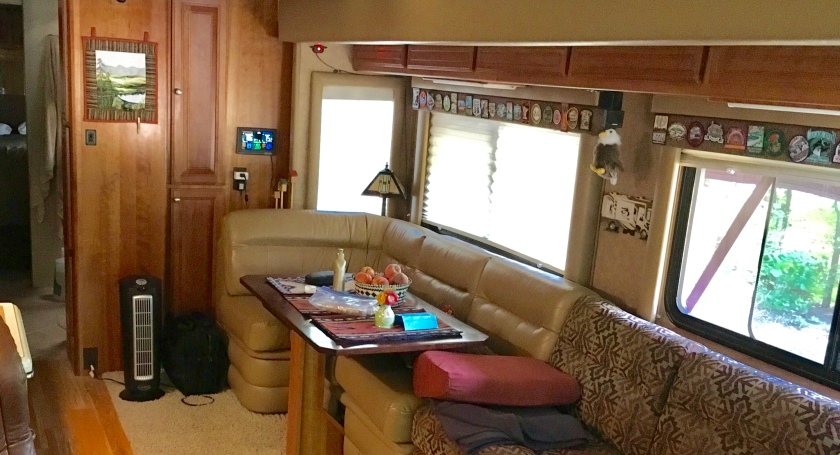 I posted a picture of this table on the Foretravel Owners Forum (ForeForums, http://www.foreforums.com ) and said it was a prototype that would get replaced. I heard from some folks in North Carolina within about 15 minutes who asked if they could have it. That was always my intention so it will soon find a new home.

After using this table we decided 1″ bigger in both direction would be nice and I wanted to see if I could move the pedestal base closer to the couch.

Here is the cherry table top. The small bowtie inlays are mesquite cut from a log I got in Texas

The square pegs and breadboard keys are made from ebony. 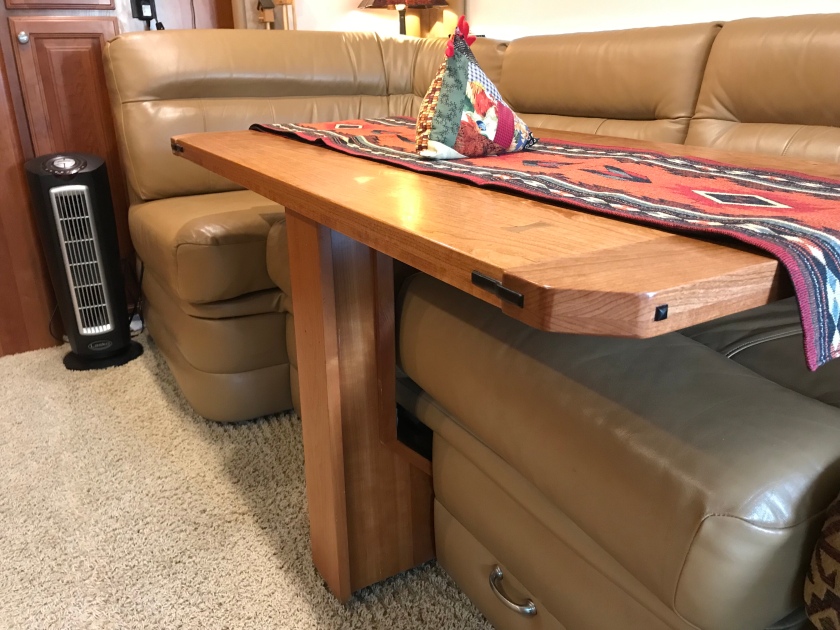 And I was able to modify the pedestal base and move it about 1-1/2″ closer to the cushion.

We got a new SW looking table runner that matches our place mats. The chicken came from a Fabric Arts Guild Center in Tillamook, OR.

Susan got a new coffee thermos which just happened to match a hot pad we got from my sister.

It looks wonderful. Susan is concerned about a scratch or dings. I am not. It is made to be used and enjoyed.

More later with Much Love,

2 thoughts on “A Tale of Two Tables”