A Week at Gros Ventre Campground

We left Colter Bay by shortly after 9 AM on our way to Gros Ventre Campground at the southern end of Grand Teton National Park. Our water tank was full and waste tanks empty in preparation for a week of dry camping. That means no electrical, water or waste hookups.

We have stayed at Gros Ventre before. It is along the Gros Ventre River in a much more open, sage brush area with cottonwood trees along the river. We arrived at about 10 AM and there was no one in line! We asked for an open sunny site as we wanted to try to operate for an entire week on solar power only, no land line and no generator. At first we thought we might have to wait for a site but they found one that would work. We finished up the paper work and beaded down to the B loop. $17 per night for those with a Geezer Pass.

We had plenty of room. Sun from morning until later in the afternoon when a tree in the next site over started to shade our solar panels. It was a short walk to the tree line behind us to the Gros Ventre River.

The river varies from fairly wide in places to several narrow flows through the rocky bed. In the spring it must be quite big but towards the end of the summer it is more rocks than river.

The campground extends for more than a half mile along the river. There are bear in the area so each site has a bear proof box in which to store food and cooking things. One loop is for groups. One big loop of the campground is tents only. At least three loops are no generators allowed. Many of these were occupied by tents and smaller campers. One loop has electrical hookups for anyone who wants to pay extra for them. And the remainder is a mix of camping units, most with generators either built in to them or outside units.

It is a big campground and one of few that often doesn’t fill up every day.

Every day we walked or rode our bikes through the campground, some times both. It was not hard to get to three miles just walking. More if we rode our bikes.

We went into Jackson (the city is named Jackson, not jackson Hole) to do some grocery shopping and discovered the Framers’ Market was open . It was in the main square in town and parking was a challenge but we found a spot. We found apples, peaches, blueberries, a cucumber and tomatoes. When we find Farmers’ Markets we like to shop for local stuff. I am pretty sure none of the fruit was local and maybe little of the vegetables either. Jackson Hole (as the valley is called) has a growing season of just over 90 days.

We put our purchases in the cooler in the car and walked back to Cafe Genevieve to have lunch. We got a nice outside table right away and a wonderful lunch. They make their own corned beef so a Rueben sandwich seemed appropriate to me. Honestly it was one of the best I have ever had. And it was huge. Susan ate part of it along with her beet salad with goat cheese and nuts.

We returned later in the week for another meal to celebrate our 45th anniversary of committed likey-likey. (1)

Then off to the Albertson’s for a week’s worth of supplies. Prices were higher than expected but not too bad compared to West Yellowstone. But in general everything is more expensive here because it can be. The average home price in the Jackson area is $1.5 million. If you want something with enough grass to mow, double that.

Apples, fruit, milk, oatmeal, bread, tortillas, vegetables, hamburger and ground turkey. Somehow the cart filled. There are no plastic bags when you check out and you have to pay for paper so it is a good thing we bring our own reusable bags.

Jackson is a busy town. Lots of activity and lots of people. The main street is crammed with shops mainly catering to tourists, some high end jewelry stores, a few real estate offices and lots of places to eat and drink. Like so many of the old west towns it has morphed from the old days of ranch stores and the feed and grain supply to feeding and supplying tourists.

A Dinner with Friends.

We met Dave Katsuki and Nancy Elkins for dinner on a Sunday evening at their coach at the National Elk Refuge. They are Foretravel owners who volunteer at the National Elk Refuge just south of the Grand Teton National Park. It is there because Jackson grew up where the elk used to migrate every winter. So now there is a huge area for them to congregate, not enough food so they get fed. Bison, big horn sheep, birds, antelope and many more species show up as well.

It was a bring our own dinner sort of thing. We brought food, bowls, utensils, napkins and drinks. We had a nice time visiting and sharing time together.

For more information on the National Elk Refuge please see

While we were in Jackson I stopped at a couple of fishing shops looking for advice. Most seemed to think the Gros Ventre river this time of year would not be fruitful. They suggested closer to the dam might work. So I decided to wait a week to try fishing again.

String Lake is just north of Jenny Lake. It is a glacial lake at the base of the mountains. They are hidden from view by the moraines pushed ahead of the glaciers as they came down the face of the Tetons. Jenny Lake is the popular one, everyone goes there. The parking lots are full by 9 AM and people park along the side of the highway for nearly a mile in either direction. We stayed in the Jenny Lake campground in 1980 in our camper. Now it is tents only and fills early every day.

In non-pandemic times there is a ferry boat that takes folks across the lake to several day hike trail heads. You can take the ferry back or walk back around the southern end of the lake, about 2 miles. The ferry boats leave both sides of the lake every 15 minutes for the 7-8 minute ride, disembark, load, go again all day long. Usually the line for the ferry boat – after you buy your ticket ($18 round trip, $10 one way) – is about a half hour wait. Crowded with lots of people. Many day visitors from Jackson.

But the next lake north is String Lake, there is a boat launch for kayaks and canoes, trailheads for hiking and quiet picnic areas. The parking areas can get full but 10 to 15 minutes away is too far for the Jenny Lake crowd. We drove there bypassing Jenny Lake, parked, walked along the lake to a bench along the trail and had a picnic lunch.

We have been here before, a much more relaxing place than Jenny Lake.

The Laurence Rockefeller Preserve is in the SW corner of Grand Teton National Park on the Moose Wilson Road heading SW from the main Park Visitor’s Center. It is well worth your time to stop at this Visitor’s Center. The Moose Wilson road is narrow and twisty, no RVs or trailers. In some places it is even more narrow. The Death Canyon Trailhead is about half way to the Rockefeller Preserve. Someday I want to drive up there.

Once you get to the Preserve there is very limited parking. You can turn around and leave or wait for a spot. There is actually a parking person. There so no cheating. It is worth the wait.

The Visitor’s Center is more of a library and research center. The displays are there to inspire thought about the wonders of the park and the natural world. We really enjoyed the peaceful quiet and contemplative feel to the Center. Due to the Pandemic it is not open. But the trail heads to Phelps Lake are open. There are several ways to get to the lake, the Creek Side Trail and the Woodland Trail are pretty direct.

The Rockefeller Family quietly bought up large tracts of land in the valley and surrounding mountains. Most of it was eventually donated to the Grand Teton Park as it was in the process of being formed. The area around Phelps Lake was a favorite family retreat, there were cabins on the lake and other structures that made it an isolated and private place for them to come. Laurence was the last holder of this property and passed it on to be part of the park confirming his love for the land, nature and our part in it. The cabins are gone, the lake shore restored, the Visitor’s Center now awaits people, a few at a time, slowly, to absorb what is here.

We took the Woodland Trail to Phelps Lake. It was about 2 miles. 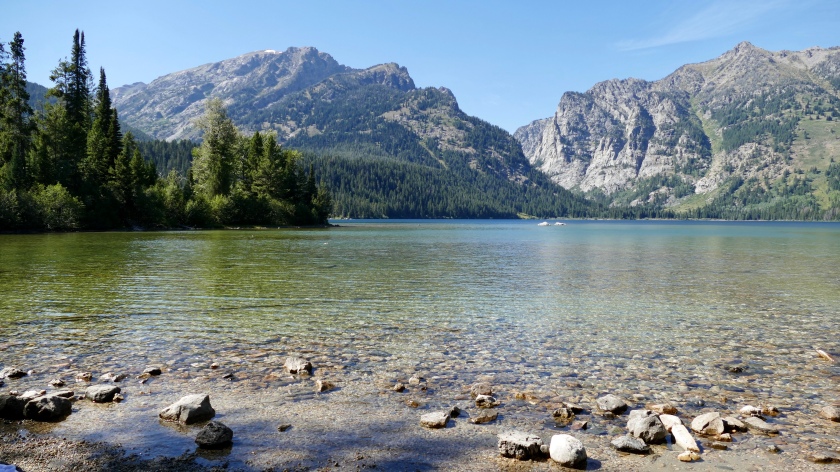 There is a trail all around the lake, about 30 miles. You need a back country permit to camp. We saw very few other people on this hike, very nice. I am sure there are fish here.

We returned along the Creek Side Trail. It was more hilly and lots more rocks and roots to be careful not to trip on.

One of the goals for our week at Gros Ventre was to test out our solar power generation, lithium battery storage capacity and how that balanced with our use. We had no electrical hookup in Gros Ventre and while we have significant generator capacity we wanted to not use it.

Bottom line – success. We had temperatures in the 30s every night except for two in the 20s on either side of a day that only just barely broke 50° and rained most of the day. Not much solar production that day but every other day saw more production than we used. By the end of the week we had not quite made up for the lost day but were getting there. I am thinking maybe we need a couple more panels. But if we were in the sun all week we would have had plenty. But that doesn’t always happen and those mid-winter days are when it would be nice to have the extra capacity.

We are pretty much self contained and independent. If we are careful we can go for two weeks with our water capacity and waste holding tank capacity. Sooner or later we need to empty those, get more water and supplies.

A week with no land line and no generator in a motorhome is a significant accomplishment. Some self patting on the back, I know, but this feels really good.

We are heading back to Colter Bay to the RV Campground for another week.

There are so many amazing places to visit. And we are  blessed to be able to return to some of the more special ones more than once and stay longer and enjoy them even more.