Off we go towards Tucson, not in a very straight line or in any hurry.  We could have driven from Mustang Island to Tucson in two days but we will take a week.

We headed north from Corpus Christi towards San Antonio and then west to Kerrville.  We had thought about stopping in Fredericksburg where a friend has been recovering from a surgery but he was back home in the Dallas-Fort Worth area.  We also heard that Fredericksburg was a nice place to see spring flowers but we were early for that. Our friends Douglas and Amanda home base north of Austin and suggested we meet for dinner in Kerrville.  It was only a 2-1/2 hr drive one way for them, nothing by TX standards.

We stayed overnight in the Kerrville-Schreiner county campground on the Guadalupe river.  It was pretty nice.

Next to us was a classic 1978 Vogue with a big Detroit Diesel 6 cylinder two-stroke. This was a popular engine in those days, hard to find service folks who know anything about them any more.
I though the round porthole windows were pretty neat.

Douglas and Amanda arrived and we went to a place on the river for supper.  Good food. 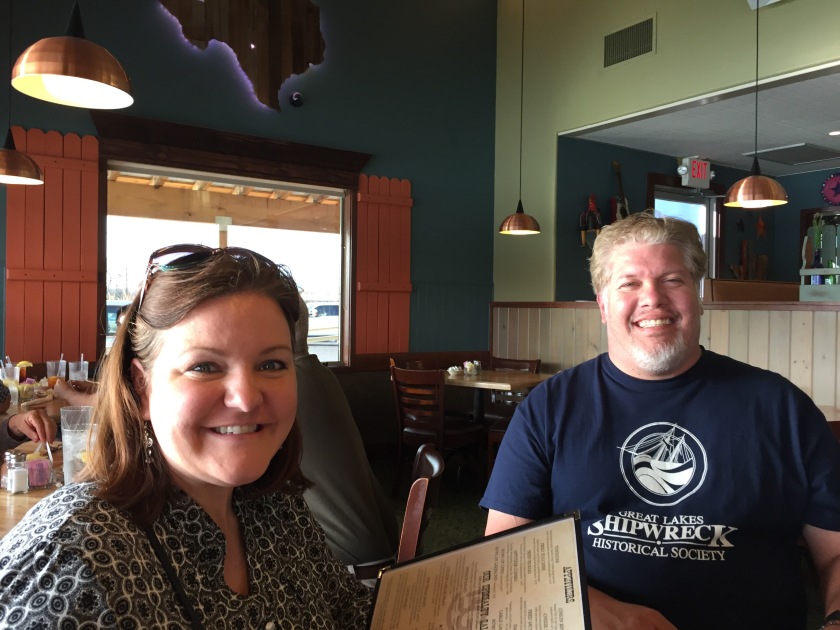 Douglas wore his Great Lakes Shipwreck Museum T-shirt from last summer.  In just six weeks this was the third time we crossed paths with Amanda and Douglas, mostly on purpose.  After supper we went back and played Quidler.  They had a long drive home and we were headed further west the next day so the party broke up early.  The next time we see them may be this summer.

I was checking on the internet at the Foretravel Forum before heading to bed and someone posted about railroad cars in Wyoming getting blown over in high winds.  I looked at the web site and they were containers stacked two high on a container train that had blown over.  In the 1980’s I was doing some consulting with the Association of American Rail Roads on aerodynamics of freight trains and this was one of the issues we looked at.  So I googled something like container trains blowing over in the wind and one of the first things that came up was an article about wind tunnel testing of freight trains.

And there I was, third from the left in 1985.  This was up in Ottowa, CA at the National Research Council of Canada’s 9M wind tunnel.  We were all standing in the 30′ x 30′ cross section wind tunnel with a 1/6 scale model of a locomotive.  We had several different locomotive types and many different rail cars as well.  Another odd bit of history.

I am way behind again on blogs. I am trying to get caught up.