We have moved from Asheville to The Great Smoky Mountains National Park.  We have cell phone service that goe from 1X to No Service.  Data is very slow.  We sort of expected this but after having 4G service everywhere we have been is it an adjustment.  All that being said, I will try to post to,the blog although they may be shorter and I may have to save some pictures for later.

We arrived in Asheville in Friday, April, 11, 2014. Asheville is at the foothils of the Appalachian. Mountains at about 2200 ft. It is very hilly and surrounded by low mountains. It is spread out through several areas, valleys, gaps or coves as they are called. From one area you can’t see much of anywhere else.  Each has a little different flavor. If you don’t know where something is, even with a map it is hard to find.  We spent about 30 minutes looking for a grocery store and never left the city and never found one.  We did finally find one.  We have been to Asheville a couple times before.  It is a very pleasant  place to visit. We were here in February for the Annual Arts and Crafts show and sale held at the Grove Park Inn. It is one of the major events each year in the Arts and Crafts world.  The Grove Park Inn is an amazing old hotel built during the height of the Arts and Craft period and was furnished entirely with furniture from Stickley and Roycroft.  Much of the furnishings remain more as display pieces rather than everyday pieces.
Nice place to visit, maybe lunch, maybe stay.
Saturday, we went to the Biltmore Estate. It was the home of George Washington Vanderbilt.  It was built from 1889-1895 while he was still a bachelor.  He chose this site over the more common Rhode Island or Long Island locations for the very rich to build their summer homes because he liked the weather, the clean air and the land.  His inspiration came from any European trips visitimg chateaus and castles.  He ended up with a French chateau looking home on 125,000 acres.  The home is the largest home in America, more than 250 rooms, 175,000 sq ft.  From the outside and to,the family and guests inside it looks like three stories.  But to more than 30 staff people there were 7 floors.  Entire floors tucked in between the public floors where servants could do what needed to be done without being seen. 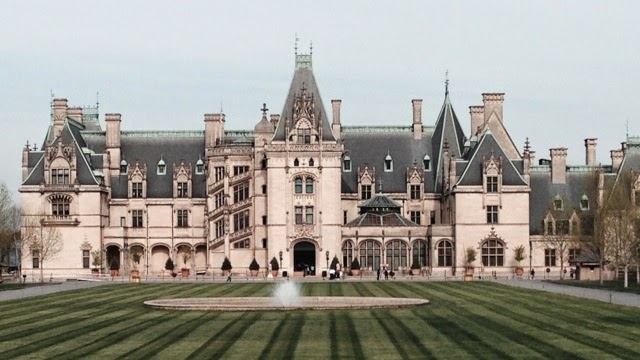 I better try to post this one before it gets too big.