We left the Oregon coast on Sunday.  18 days went by way too fast, next time at least a month.  It rained on and off most of Saturday so we got the out door tasks done. Good thing,  it rained steady all night Saturday.  By Sunday morning it had stopped, we did the last few things we needed to do and were on the road by shortly after nine.

Heading south on US 101 once we got past Tillamook, was much better than the part from 26 coming west from Portland and then south on US 101.  Most of this road going south from Tillamook had been repaved so the ride was better.  It is still a narrow winding road with some turnouts and generally little or no shoulders. We were headed to Oregon 18 which heads east towards Salem from Otis and then connects to Oregon 22 through Salem and continues east.
Diesel in Oregon is $.30 to $.50 more than any where else we have been on this trip.  Typically it ranges from $2.99 to $3.59.  So we were surprised to find diesel at two stations in Salem for $2.37.  Seems there was some competition going on.  A third station across the street was at $3.59, not playing.  Gasoline was not on sale. $3.39 for regular, $3.89 for premium.  And you cannot pump your own gas here so we occupied a lot of their space while we took on 107 gallons.
Oregon 22 is a two lane road in good shape with reasonable shoulders.  It heads up into the central mountains and connects to US 20 (another good two lane road) that rises through the 4700 ft McKenzie Pass just before you get to Sisters, OR and then down into Bend, OR. 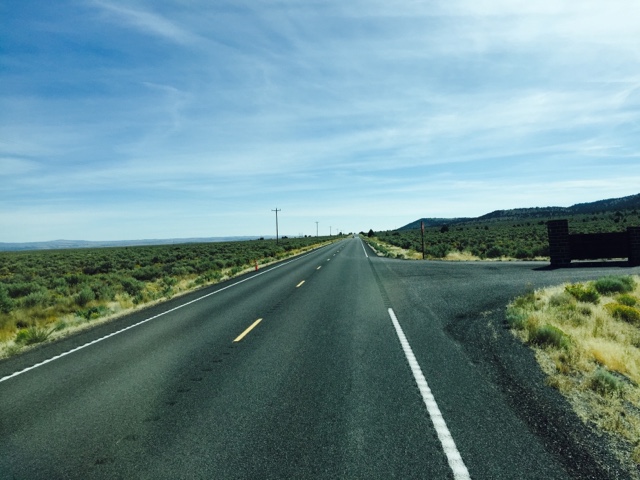 Before you get to the mountains it is pretty flat, few trees, sort of like lots of places out west, dry and covered with sagebrush. 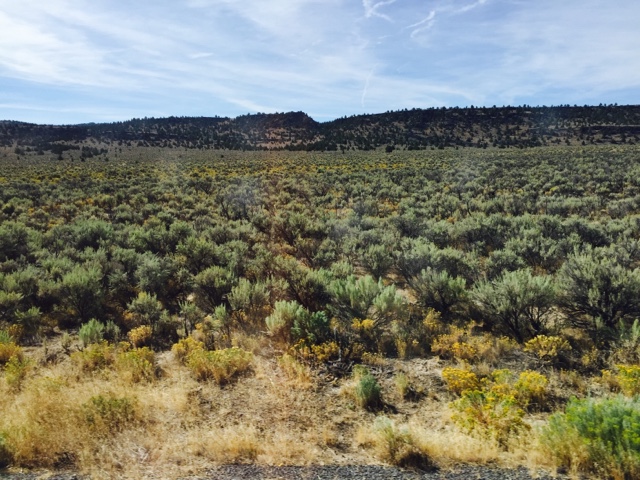 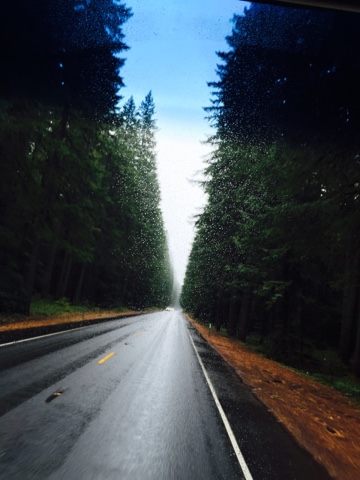 And then the west slope of the central mountains, big trees, lots of trees.  And it rained most of the way up.  They really need rain.  It is very dry. 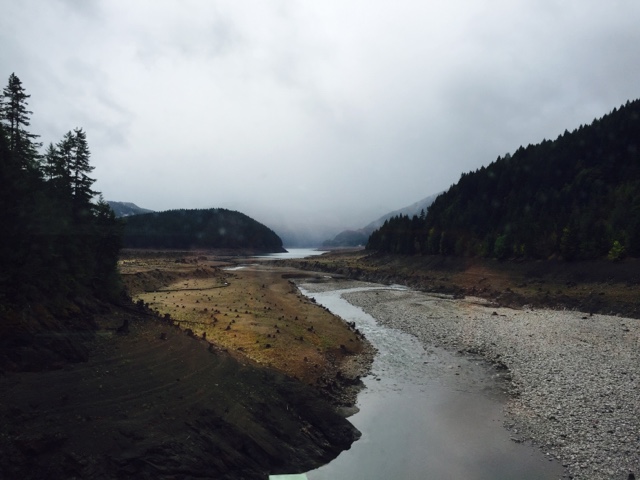 Normally this river (South Yamhill) would fill the picture side to side. 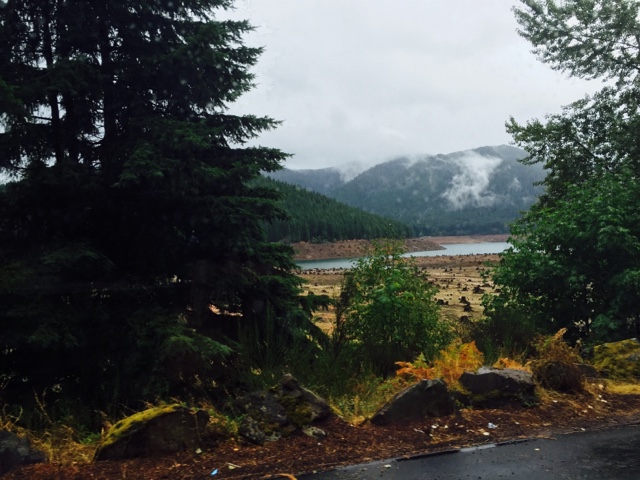 Everything that is brown here would normally be under water. 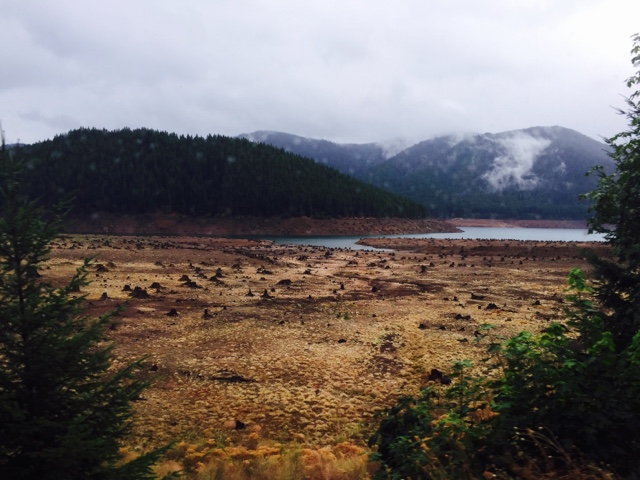 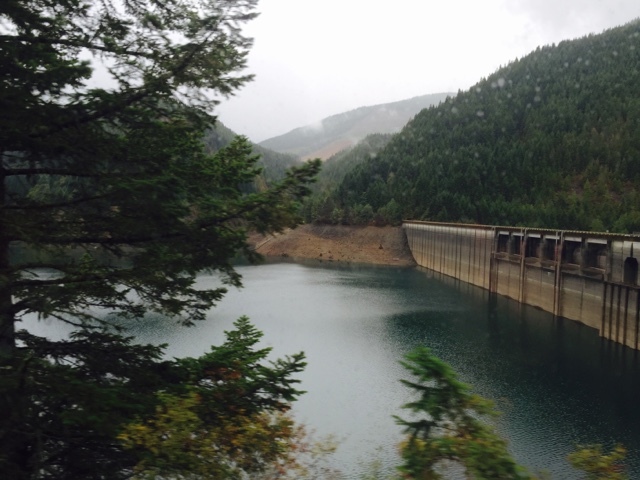 Water levels at this dam are about 50′ low. 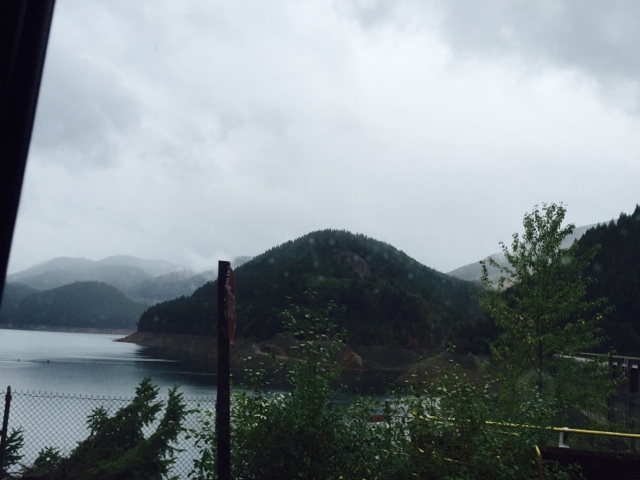 Cloudy, misty, rain.  Steep climbs, slow turns, traffic not too bad.  The coach did just fine on both the uphill and down hill parts. 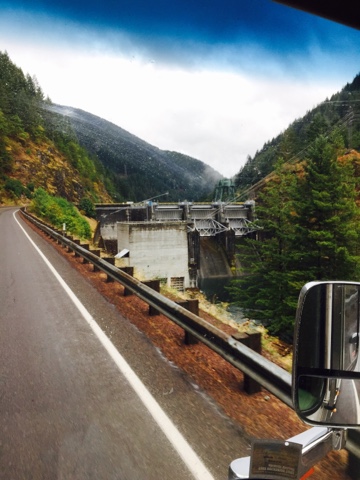 There are a series of dams and powerplants as well headed towards the pass. 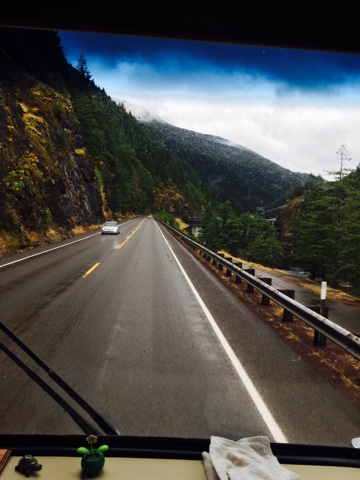 Susan’s favorite part, nothing but nothing on the right. 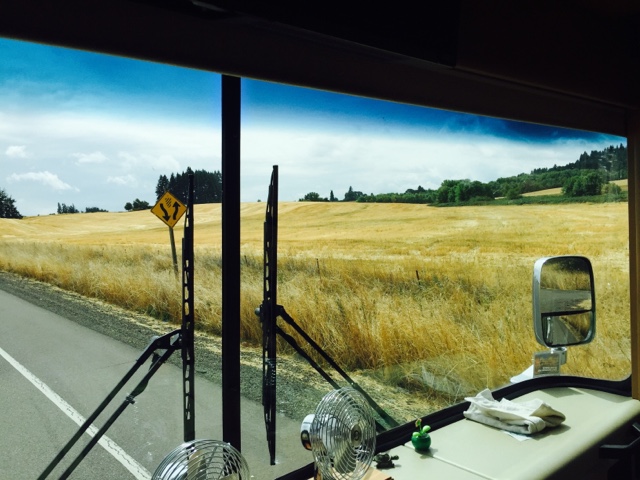 And then over the pass, down hill, much drier, very few trees and grassland.
Sisters, OR looked interesting but very much manufactured for the tourist trade.  It reminded us of Durango, CO. We went on to Bend and stayed at Camp Walmart.
From Bend going east towards Ontario there is another 4,800 ft pass. And then a long downhill winding path towards Ontario.  All of this is two lane, 55 mph. Good road, not much traffic.
As you get towards Ontario the land gets very flat, mainly because they graded it that way for flood irrigation.  Many years ago they grew a lot of grass seed out this way. Now it is the onion capital of the world, or so they claim.  Over 1 billion pounds of onions from this area every year.  Irrigation canals, pipe lines and equipment everywhere.  Even the John Deere dealer had equipment that was quite odd, specialized for the onion growers.
The dirt looks like light, gray plowed up mud.  It is hard to imagine anything would grow in it but with enough water onions must.
We stopped just past Ontario in an old RV park full of museum aged rvs.  It is OK.  Lots of folks just living here in old RVs that will likely never move again. Doing some laundry this AM.
A shorter drive to Idaho Falls today and then over another pass into the Tetons on Wednesday morning.
More later,
Roger and Susan