It is Wednesday 8/3/2016. Today we went by ferry to Mackinac (pronounced Mackinaw) Island.  Once there transportation is by foot, horse, carriage or bicycle.  There are about 800 horses and a bazillion bicycles on the island. There is one motorized vehicle on the island, an ambulance. There is a small airport as well so I guess maybe the few airplanes count.  There are 500 permanent residents and 15-20,000 visitors each day during the peak of the May-September summer season. Visitors are called “fudgies” since they almost all buy some fudge at one of the more than 15 fudge makers, most with several shops.  They are everywhere.

We got a pretty good view of the Mighty Mac Bridge.

We did not drive over the Mighty Mac. We came in from the west. It is famous for how much it moves side to side in a good wind. The Mackinac Bridge Authority has a Drivers Assistance Program that provides drivers (for a fee) for those uncomfortable with driving across the Mackinac Bridge. It is possible that the deck at center span could move as much as 35 feet (east or west) due to high winds. Gulp!  The roadway is about 200′ above the water and the bridge is five miles long
http://www.mackinacbridge.org/facts–figures-16/ 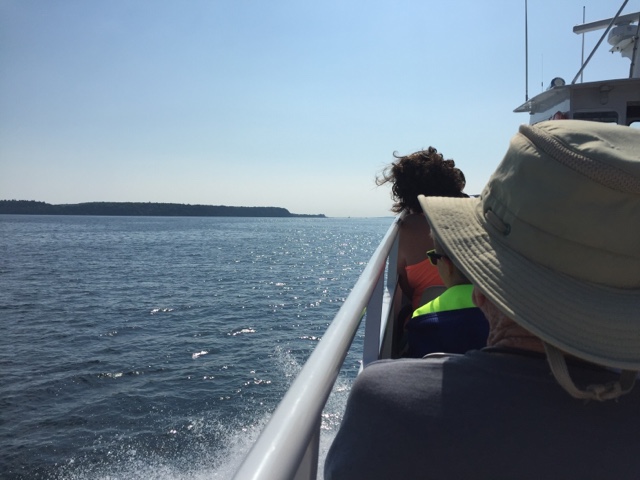 We bought tickets for the carriage tour and waited for just a short while for the appointed time.  The first half of the tour is on a smaller 20 person two horse carriage.  This part wound through town and up a big hill by the Grand Hotel where a night in a basic room will set you back $385.  Imagine a suite.  Lunch was available at the Grand for about $40 which also got you into the Hotel.  If you want to just go in and look around it was $17. 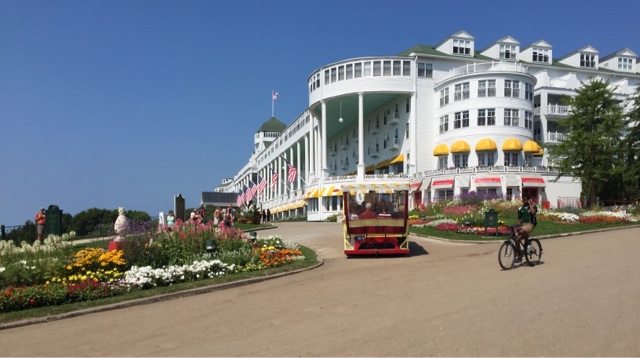 The first half went by the horse stables and Carriage Barns and ended near the Carriage Museum. 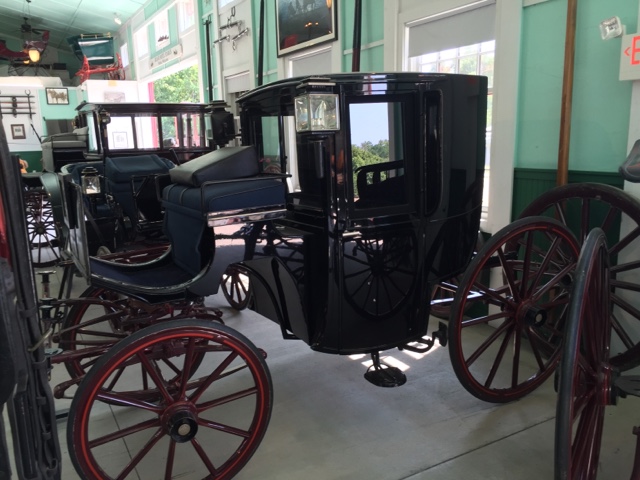 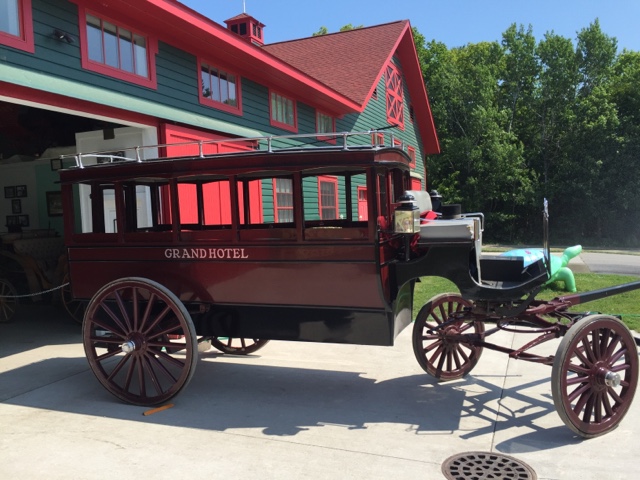 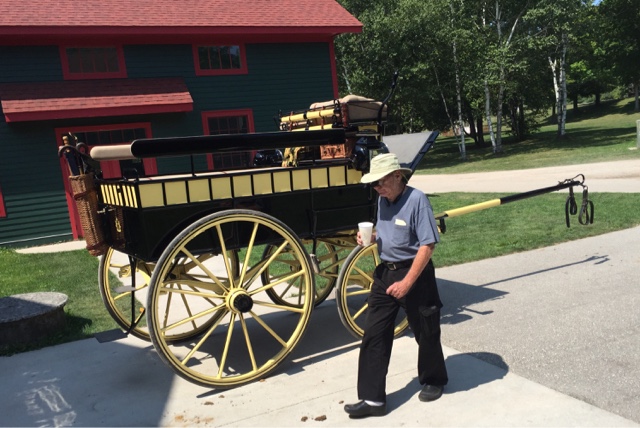 That’s Rudy.
From there we boarded a bigger 35 passenger carriage pulled by three horses. The segment went through the State Park on the island to the Arch Rock, 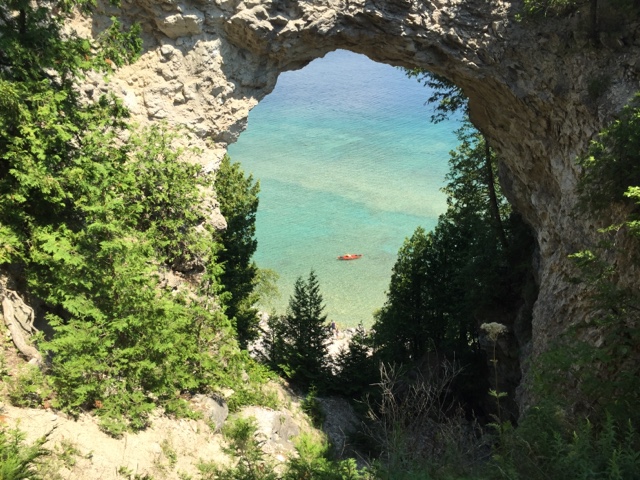 by a couple of cemetaries and the Post Cemetary and finally to Fort Mackinac.  It was originally built by the British about 1780 who occupied It until 1796 long after the American Revolution.  The British retook the fort during the War of 1812. The Americans got it back in 1815 and occupied it until it was decommissioned in 1895.  From 1875 to 1895 the fort was part of America’s second National Park, Mackinac National Park which included most of the island until it was closed in 1895.
We got off at the fort and went into several buildings that showed what everyday life was like at the fort. It is a living history museum so there are lots of folks dressed up in period costume. Soldiers were doing their daily duties.  Flintlock rifles were fired and once a day they shoot a cannon. The fort is up on a bluff and the views were grand. 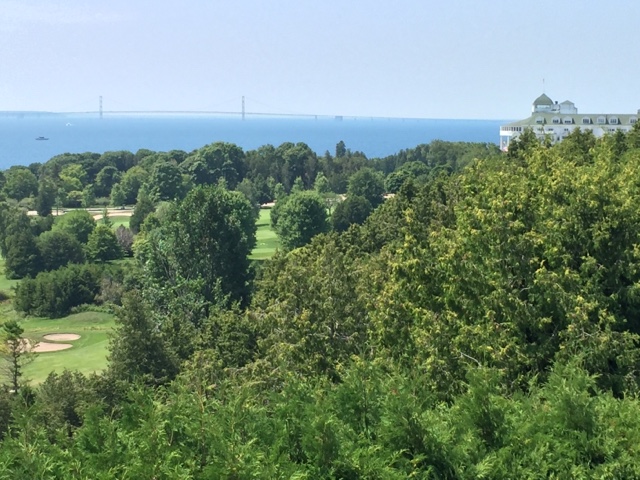 We walked down the hill towards the town past the garden areas for the fort and had lunch in a small place. Lunch was good. 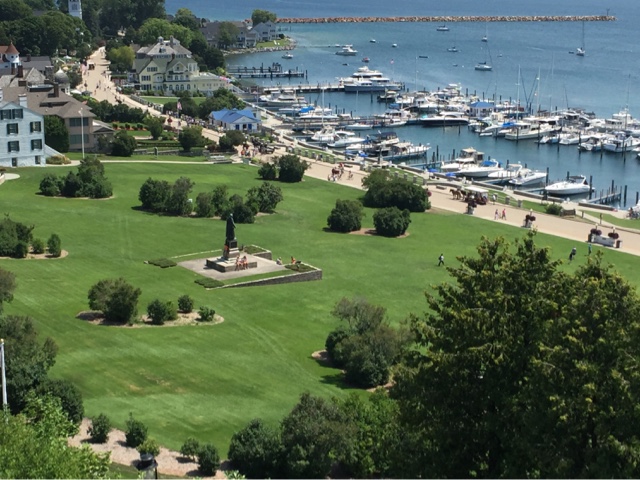 We walked up and down the street looking for fudge and a kite shop.  Fudge was found, kites not.  We got our 10,000 steps in this day. And it was unseasonably hot (90 ish) and somewhat humid.  We were all pretty pooped so we wandered in the direction of the ferry dock, waited a bit and in spite of the wind and waves that had come up sat on the upper deck to enjoy the breeze on the way back.
A light supper and an early bed time for us.  We are on Eastern time so things seem a bit out of whack.
Tomorrow will be an off day, we need it.  Friday the plan is to go back to Mackinac with our bikes and ride around the island.
More later.
Roger and Susan.