It is not far from Houghton to Union Bay Campground in Porcupine Mountains State Park, yup we are still in Michigan. Susan and I have been to the Porkies a couple times before, once in the late 70’s and a couple years ago.  Camping then was different from now.

The last time we were here about four years ago we stayed at the Ontonagon City Campground. we thought about staying there but they don’t take reservations so making sure you have a spot is tough although most week days in the summer they have openings.  There are a few choice spots right on the lake that would be nice.  We stopped in to check it out and there were two premium campsites coming open in the next two days that we could have had.  But we were only staying for three nights so Union Bay it was.

On our way back through Ontonagon we stopped at a small quilt shop. They sell other craft things as well but the owner is a very serious quilter.  Her husband collects and sells guitars at the shop as well.
Pictures hardly do her work justice.

There are many of her award winning quilts hanging in the shop. They are not for sale but for the right price she will make you one just like it.

The detail was amazing, all done in silk.

We also went to a rock shop where I found a very nice looking natural copper deposit piece.  The copper ore clings to the underlying rock.  Just the right size for our mantle.

Here is a picture of the copper piece, It took more than 20 tries to get it inserted, more than 20 Google failures. No explanation or help, just failures. Typical Google.

The next day we went to see Lake in the Clouds. This is a lake that is more than a mile long. It lies in a fold in the Earth’s crust that makes much of the basin of Lake Superior.  On the right in the picture is what is called the Escarpment. It is a long cliff face that forms the northern side of  The Lake in the Clouds basin. 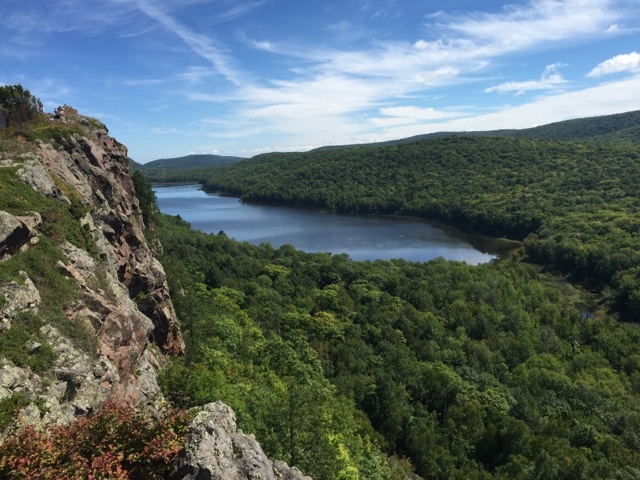 A small river runs into the lake at the far end and out at this end.  This is mostly a wilderness backpacking park.  We were able to see hikers way down by the lake crossing the river.

It is quite a drop to the Lake of the Clouds. This formation heads to the east for several miles.

There were several early copper mines in this area most before the time of the Civil War. Most of the mines were north of the Escarpment towards the lake. They were likely to be found along streams where copper ore was found at the surface. Holes were dug into the stream banks looking for copper. These tunnels were small, just big enough to crawl though, all dug by hand with crude explosives.  There never was much copper found, some to be sure, but I would bet there are more miners to be found in these old tunnels than copper.

We had to go down a long stairway to get to a bridge over the river to see the falls.

And where it runs out into Lake Superior.  There are three falls along this stretch of the river. This one was easiest to get to.

Rudy and Carolyn made it all the way down..

Susan and the whirlpool.

The porkies are a nice place to visit.  You really need to get out and do some hiking to appreciate what is here.  We will probably go back with more hiking on the agenda.