After the Railroad Museum Rudy and I needed something bigger to look at.  Just across the road closer to the harbor is the Wm A Irvin.  It is a 1938 vintage iron ore boat, the flagship of the US Steel Great Lakes fleet now permanently moored in a slip next to the Duluth Entertainment and Convention Center (DECC).  This lake boat hauled iron ore from 1938 until it was decommissioned in 1978. By then it was too slow, too small and too expensive to operate. It was 610 ft long and had a capacity of 13,000 tons.  Today’s bulk carriers are 1,000 ft long and can carry 60,000 tons. She could move at just over 11 knots while the newer bulk carriers move at 14-17 knots.  Most of the newer boats are self unloaders.  The Irvin was not and so it was limited to destinations where compatible unloading systems were available. The Irvin sat (floated) unused for 10 years until the DECC bought it and made it into a tourist attraction, gift shop and tour destination.  The tours last about an hour and cover the entire boat.  In the fall they convert a couple of the holds into a haunted house sort-of-thing.  Our tour leader said that the Haunted Ship event is the second biggest funding source for the DECC behind parking. 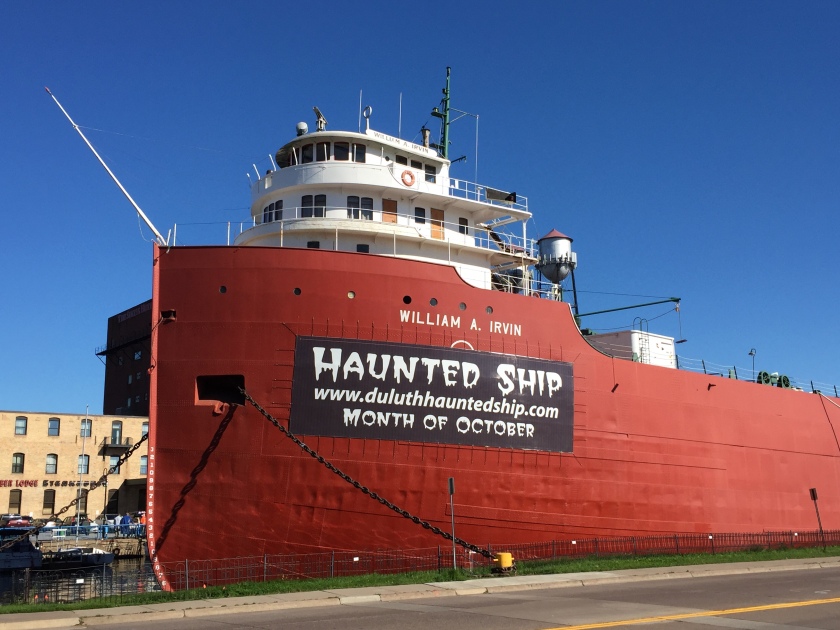 This old style lake carrier had the controls at the front and the engines and crew quarters in the rear. The ship is getting a new paint job.

The Irvin was named for the William A. Irvin who was the President of US Steel from 1932 to 1938. It is sort of amazing that they would be building a ship like this in the middle of the depression.

On 27 August 1940, the Wm A Irvin set a record by unloading 13,856 tons of ore in 2 hours 55 minutes using Hulett unloaders. This record still stands today and is unlikely to be broken, because all ships today use automatic self unloaders in the bottom of their cargo holds.

The Irvin had a traveling crane to open each one of the hatch covers except for the two at the front of the boat which were opened using a small hoist. the travelling crane wasn’t able to get up that far.

The Irvin burned 1.2 tons of coal an hour to make steam.  The locomotive we saw earlier burned 12 tons per hour.

There were two steam turbines which turned a single shaft and propeller. Rudy is down there somewhere looking at gauges.  Lots of brass to keep polished.  There were also steam and gasoline powered generators.  The crew’s quarters, the main galley and crew dining room were all at this end.  To get from this end of the ship to the other meant a trip outside.  Everything on this ship was first class. As the flagship of the fleet it was the showcase for US Steel.  There were frequent visitors and passengers from one port to another.  They stayed in the front end. 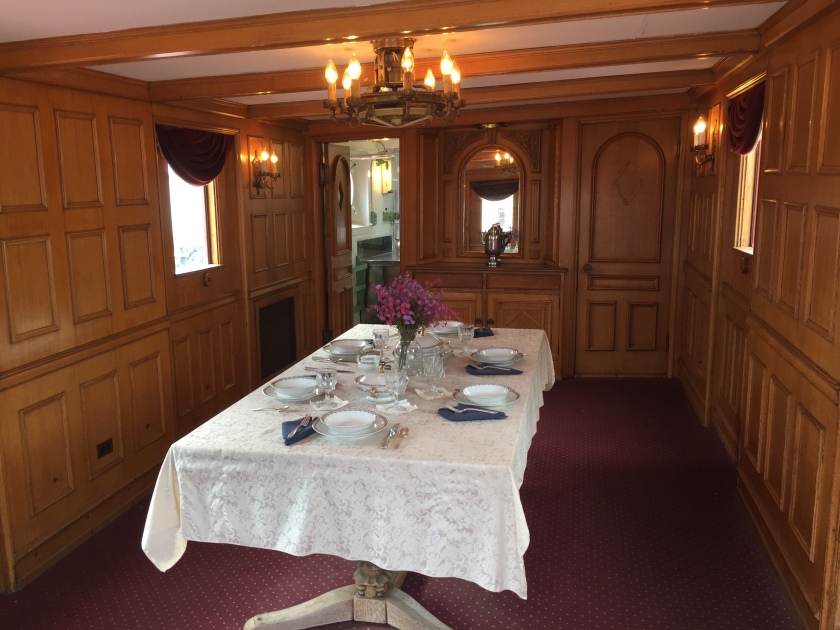 There was a very elegant oak paneled dining room including custom silverware and china. (The table was bolted to the floor.)   There were four nice state rooms, each with its own bathroom.

They all had fire places as well.

There was a complete galley and staff just for the passengers. At the very top level on the front end of the ship was the state of the art control center.

Radar wasn’t added until the late 1940’s.  There were two steering wheels, one for in port and one for on the lake. The in-port steering was much quicker for maneuverability when the boat was moving slowly. There were typical of the day engine controls and signals, very old-fashioned looking phones and a radio that looked like it was from the 50’s, it probably was.  There were also eleven voice tubes where someone on the bridge could yell into the tube and be heard somewhere else.

The Captain’s office and quarters were just behind the bridge.  Very Spartan by today’s measure. Absolute luxury compared to the rest of the crew’s quarters. 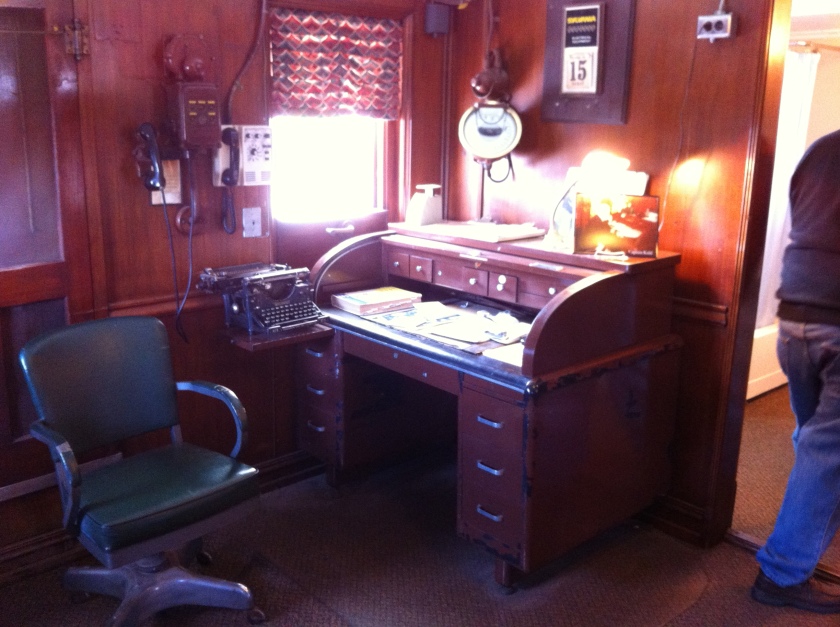 Susan and I have been on the Irvin Tour before.  It is only $5 on Tuesdays and well worth the time. Rudy and I liked it.

Next up the Duluth Ship Channel and the Lift Bridge.  The Marina where we are staying is only a couple blocks away.  The 1000′ Presque Isle is inbound.