One of the things we have started to see in RV parks over the past few years is the use of rope lighting on the ground around your RV. And now it extends around your car, your picnic table and around the entire site.  And it is not that pleasant mood lighting sort of thing, the game is on to find the most obnoxious, brightest, most glaring lights you can find.  And then to put up some junk art in front of your sight and decorated that as well.

Here is an example. Actually not as bad as some but the guy had three projectors shining the little light speckles on his coach.  It is like everyone is trying to decorate for Christmas.  They will all tell you that this keeps away rodents, snakes, spiders and things that crawl up into into your RV and eat wires.  I am convinced that this old wives tale was propagated by the “Ugly Rope Light Manufacturers Assoociation” as a way to sell this ugliness to the naive RV public.  There is no evidence that this works but lots of less than logical testimonials that it does.

Well, we had been thinking of a way to add a bit of evening lighting under the awning so we got some micro LED lights (they are about the size of a grain of rice) that are strung together about 5″ apart with very fine copper wire.  This was our first iteration.

This string has the right color, a lower Kelvin temperature which makes them more yellow.  I had to figure out how to shorten the string to the awning length which the directions said couldn’t be done.  This string was not dimmable. Power comes from the coach and up an awning arm.

These looked good.  The coach actually has underbody lighting as well.  Not as garish as rope lights.  We liked the way this looked so we got another string that was dimmable.  That string was too white.  So a third string finally had both the color and dimmable features we wanted.  These are about $9 each so trying a couple out to get the right one wasn’t a big deal.  The final version is actually sewn onto the inside of the awning flap along one of the stitching lines.  If it is off you can hardly see it. The power cord disconnects at the flap edge and the lights roll up inside of the awning when it is stowed. Neat!

The Arizona Sonoran Desert Museum is about 8 miles from Diamond J’s in the same way you go to Saguaro National Park but not as far. It is a mix of Museum and Zoo, a bit of history and popular displays. 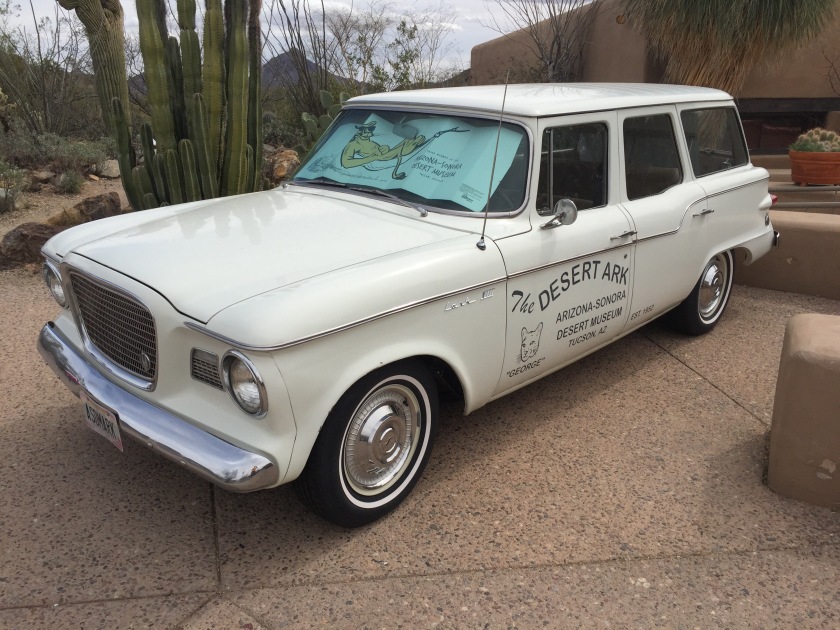 The Museum was started in the early 1950’s.  One of the early volunteers and stakeholders bought a fleet of these 1960ish Studebaker Lark station wagons that were used to take the museum to classrooms around the area to teach kids about the world around them.  There was a Studebaker Lark in the Deming Museum, pretty amazing to see two.

Lizards are everywhere in the desert.  They are an integral part of the environment.  They mostly eat insects and are usually very fast movers, hard to get a picture.  But here are some examples who seemed at ease and willing to pose for a snapshot.  These were all about 4-5′ long. 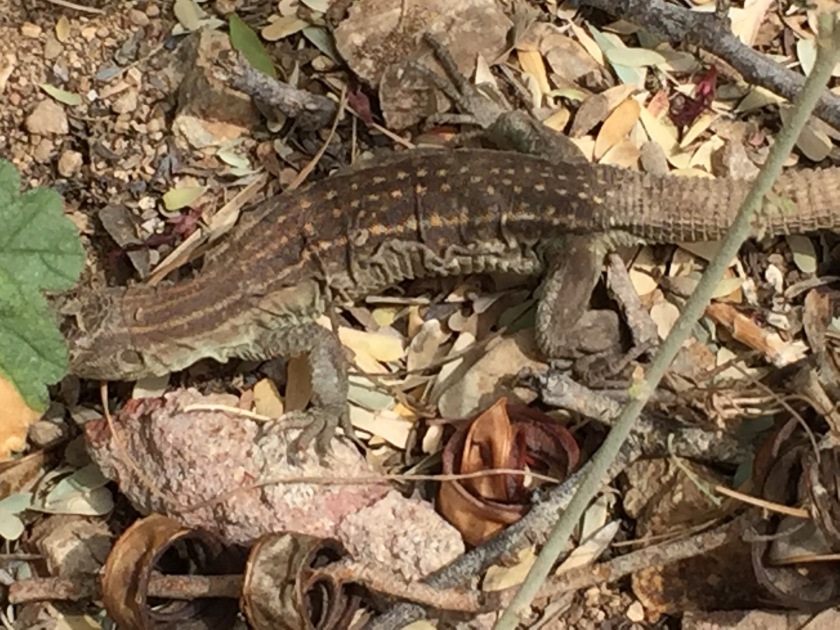 And flowers.  Every plant in the desert blooms when there is water and the right temperature.  It is the way they create more plants.  And there were bees all over moving from flower to flower.

I think these were called Fairy Dusters.  Bright red. 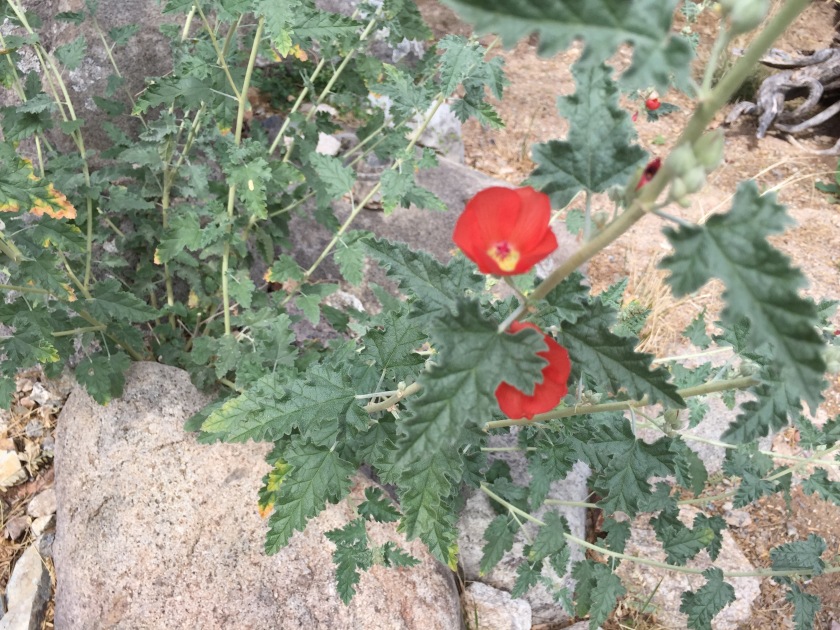 And a red poppy perhaps?

The cactus flowers are usually small but bright.

These long tube shaped flowers were favorites of hummingbirds.

Sometimes the flower is just the end of a new branch.  There were flowers everywhere.  Not just here.  The wet winter and warming temperatures had then showing up everywhere.

I have no idea what these are, just interesting seed pods.

There were lots of animals here as well. A black bear, a cougar, a bobcat, snakes of all types, prairie dogs and lots more.  There were birds as well.

These are small burrowing owls.  They are common across the SW all the way over to the Gulf Coast in Texas.

And a Harris Hawk perched on a gloved hand of a handler.  These hawks live in family groups and hunt for prey as a group. That is a very uncommon behavior for birds.

And a hummingbird on her nest just a bit bigger than a ping pong ball.

Back at the campground we got an occasional sprinkle of rain followed by sun and almost always a rainbow.  It looks so close. 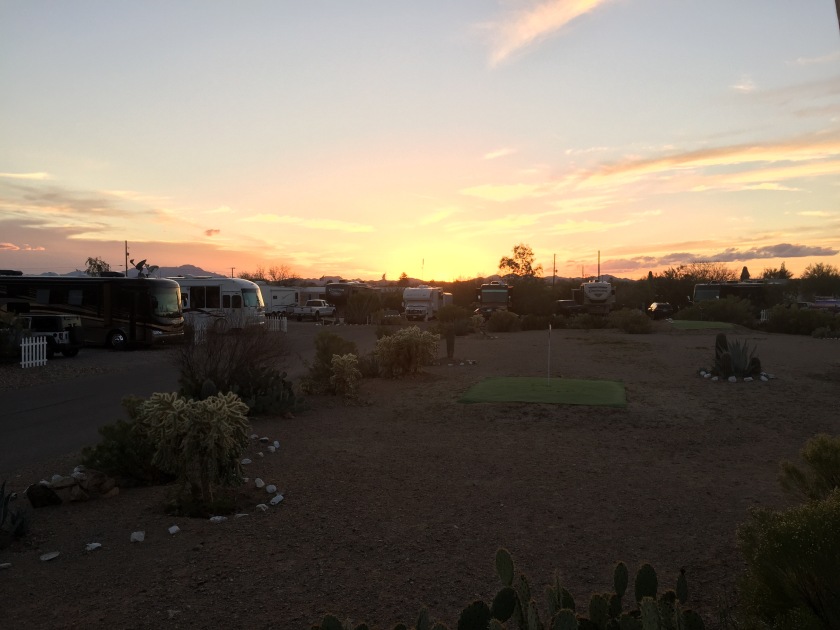 And a pretty nice sunset almost every night.