The Kasha-Katuwe Tent Rocks National Monument was created in 2001 and is entirely within the Cochiti Pueblo. It is an odd area  covered with hundreds of feet of soft rock formed by pyroclastic ash flows millions of years ago by eruptions from the Jemez Volcanic Field.  After the softer layers were deposited further eruptions deposited blobs of harder rock  all over this area.  Kasha-Katuwe means “white cliffs” in the Pueblo language Keresan.

Tent rocks are cones of the softer pumice and tuff layers under a hard cap rock.  Everything erodes around the cap rocks leaving canyons and rock formations that look like tents. 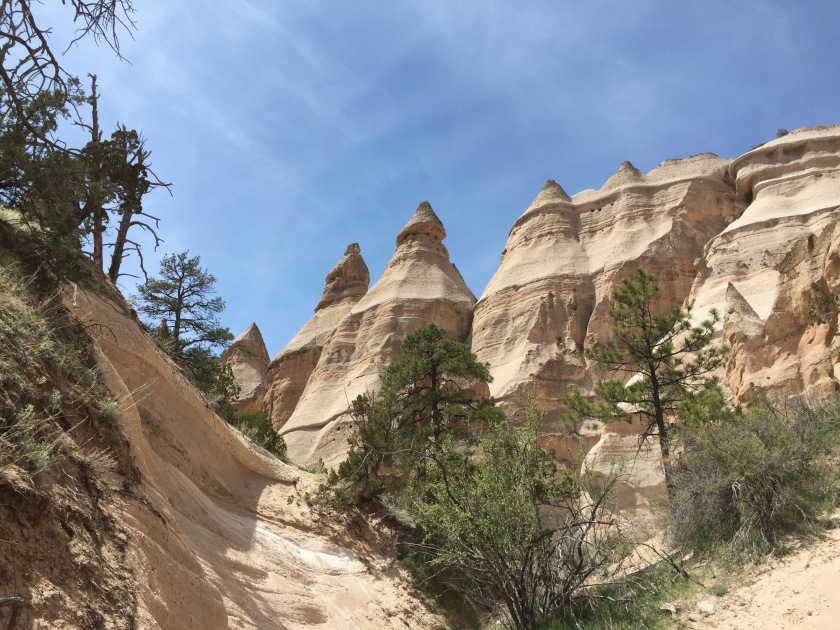 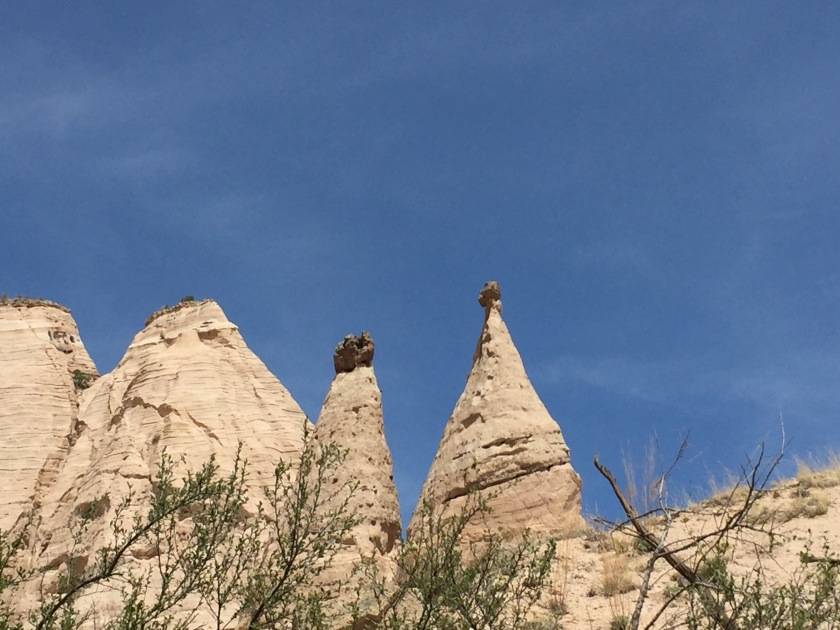 Many of the tents are almost 100 ft tall. 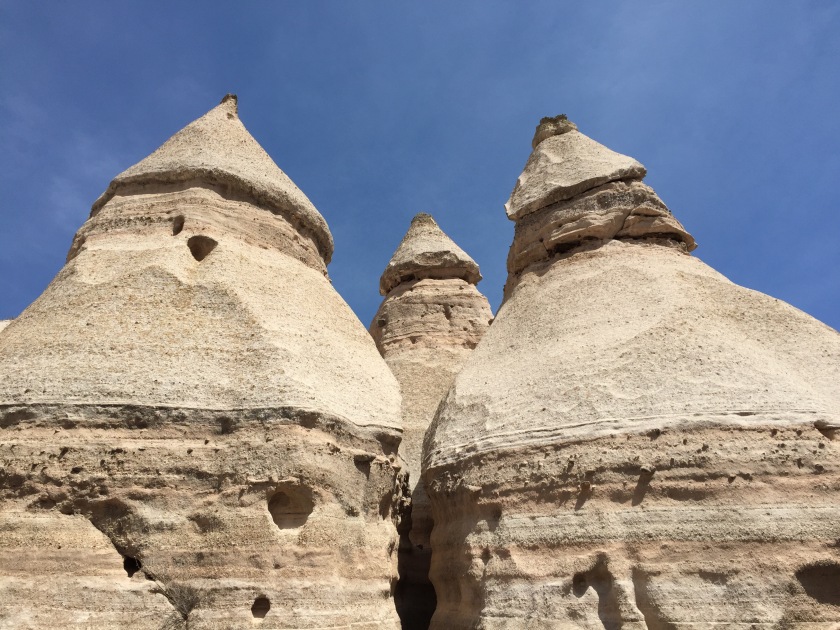 We followed a trail leading up into a slot canyon.  In many places it was very steep and only one person wide.

The trail was pretty good,  the steep parts were mostly where you had to climb over piles of rock.

Water caused all of this erosion. And things will grow where there is some water.  This is one of those places when you are driving out to it that you are sure you will be the only ones there.  But once you get there the parking lots are nearly full and you know that is not the case.  On this hike into the slot canyon there were many going up and many coming back.  There were many times when we just had to wait while folks were going either way.  We met our campground neighbors, Tim and Diane from MN as they were coming down.

One step at a time going up. 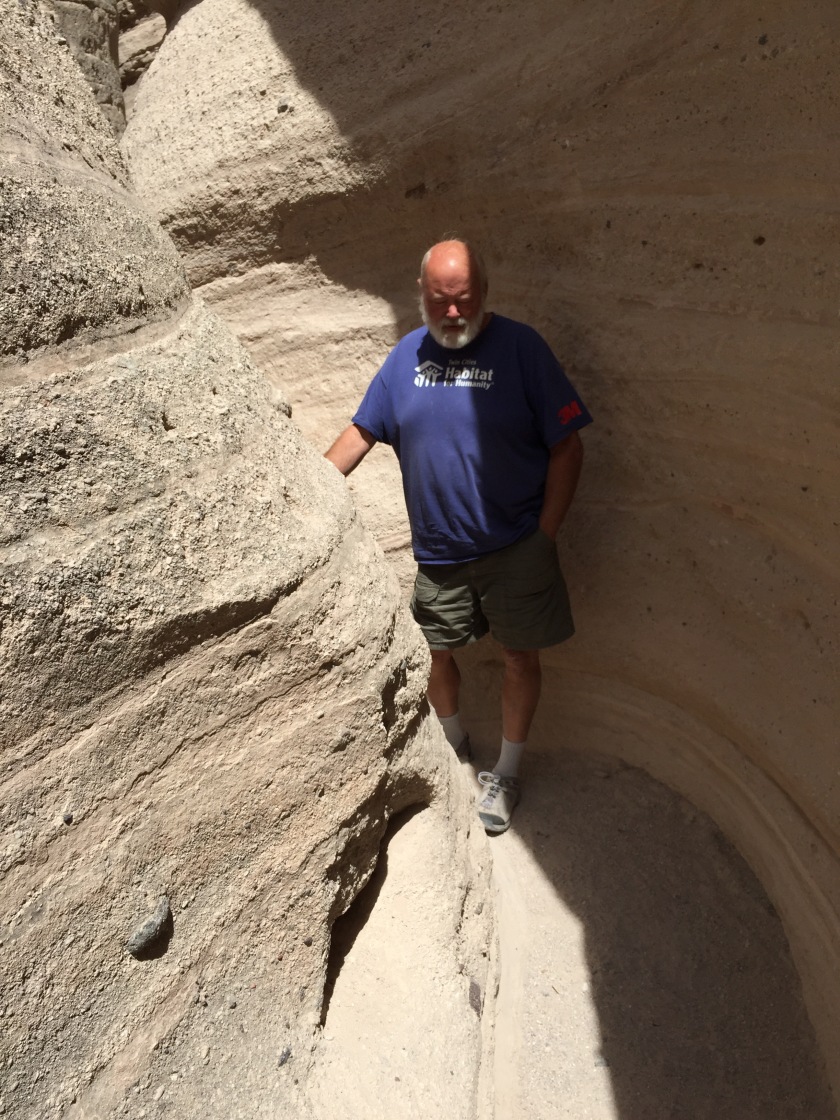 And coming down.  We had our hiking poles with us.  There were times when there just wasn’t enough room for them to help.

This was a pretty interesting place.  It was right there. Just take the time to follow the signs and go for a walk.

We got almost to the end of the trail going up the slot canyon.  There was a very steep section just before the end where one person at a time could climb up or down a chaotic rock pile. There were a whole bunch of folks waiting to come down and even more ahead of us to go up.  So we had a sit-down break and some water and headed back down.  Later that evening when Tim and Diane came over for a campfire (no open fires were allowed in the campground but our LP gas fire ring was OK) we admitted we didn’t get to the very end.  They said they didn’t either.  The end of the trail is at the end of the canyon and that was just what you could see from there.  Less congestion and we would probably have gone on but we got close.

Everywhere you turn water is at work, a new slot canyon in the making.  Water and a crack, that is all that is needed.

We are glad we take the time, have the time, to go look at these places.  We were here before and wondered what Tent Rocks were. You have to take those roads less traveled and go see.

The Kewa Pueblo has a commuter rail station.  The train goes from Albuquerque to Santa Fe.  This is one of the reasons we stayed here. Sounds like fun.