Our departure date has been Feb 20 for some time now. The last two winters in Minnesota have been mild. This winter has been cold, lots of overnight temps below zero. A few small snowfalls and one where we got “buried” with 14 inches. It was pretty light and fluffy so easy to deal with.

Projects were done, we started looking at weather as we do when heading home. In the middle of winter leaving can be just as hard. We need two clear days to get far enough south that we will be where it is warmer. All through early February it had been very cold in Texas, below freezing often, ice and snow and rain. We moved our hoped for departure date up to the 16th from the 20th to open up the window. Weather heading south looked better earlier and worse at home than heading south on the 20th.

And then there is the other stuff. In prep for our Solar Project (and because it was dying and rotting from the inside out) the old oak tree at the corner of the garage needed to go. Our tree cutter, Eric, got up into the top with his lift truck and said it wasn’t going to get better with even a severe trimming and had long spiral cracks running down into the base of the tree from lightning strikes so we said remove it. I hate cutting down trees especially oaks and this one had been there for a hundred years or so. It was over 3 ft in diameter at the base. Eric cut down as many of the branches as was safe to do with his boom truck and then got a crane in there to hold chunks as he cut them off. The rest of the big branches came down and then the trunk. They cut off an 8 ft section that weighed about 6,000 lbs and then the last 12 ft section that weighed close to 10,000 lbs. 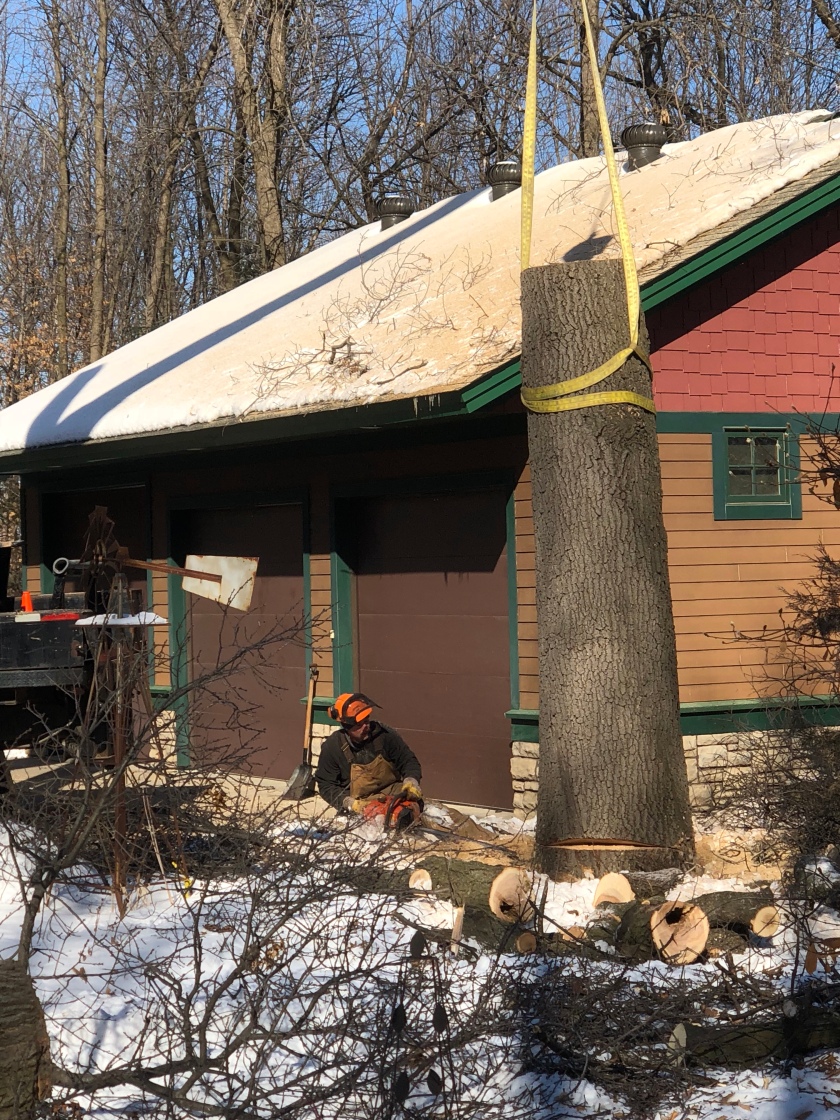 Eric’s 4 ft chain saw just barely went through the base. 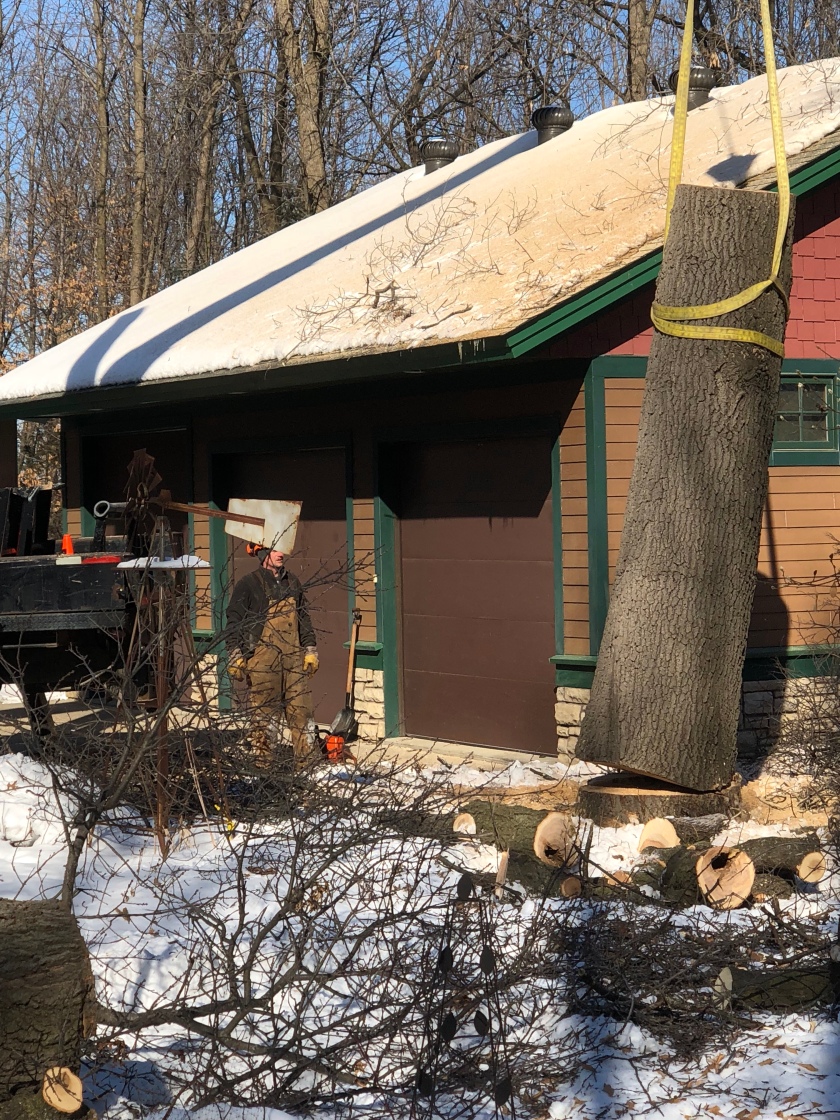 And a tug from the crane and it was free. The big logs went off to a saw mill to see what lumber they could get from them.

All this was going on while we were getting the coach ready for travel.

We were ready so we left on the 16th. We forgot a few things maybe because we left early or because of distractions or just because. Nothing we can’t live without but they get added to the list.

Seven degrees when we left, straight down 35 into Iowa, cloudy into Missouri and south of Kansas City to a WalMart that is easy in and out, just off the interstate. It is free to stay there but then you go inside and pick up some of this and that and pretty soon it is $25 anyway. Much warmer there, right around freezing.

The next morning we headed south on I49 towards Alma, Arkansas, it was raining most of the way, not hard but wet. Then SE on I40 towards Little Rock. We almost got there but turned south to cross the Arkansas River and then back up the other side to Maumelle Corps of Engineers (COE) campground. We have been here before. It is right on the river and a nice place to stop for 2 or 3 nights. 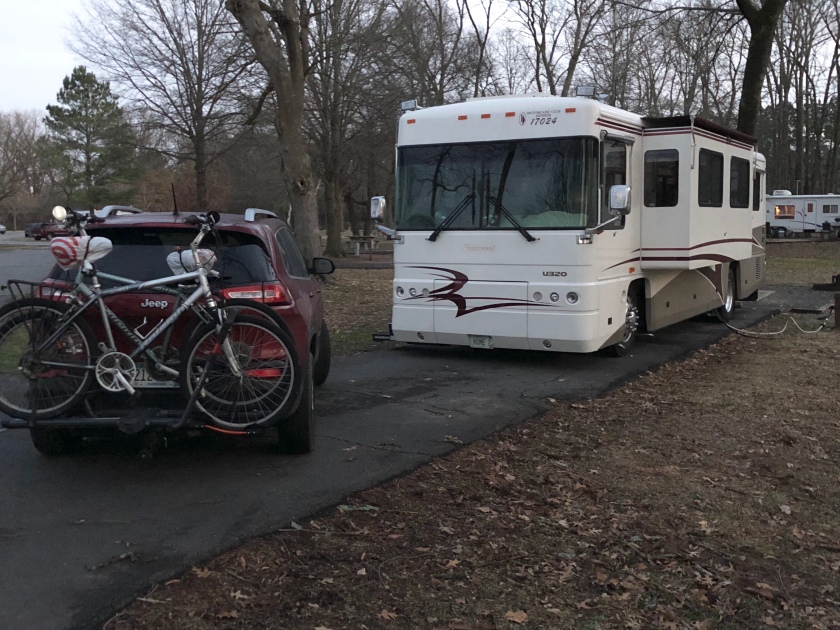 It was cloudy there but not raining. Cool, but it felt warm to us. We de-winterized the water system. Drain all of the RV antifreeze in the pipes, add water, flush everything out, repeat a couple times, drain the water tank. Add some bleach to the fill side of things and start filling the water tank. Let it sit and then drain it all out and do it again and drain that out. Then fill the tank with the filters and water softener in place. Takes a couple hours. Better than frozen pipes. 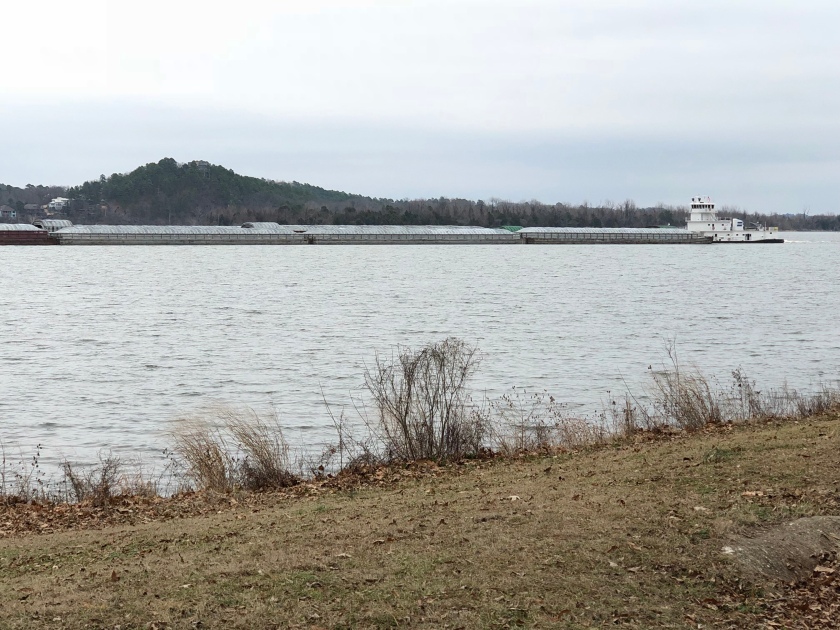 The Arkansas River connects to the Mississippi River. It has locks and dams for navigation and just like at home, barges and tow boats go by.

This is a very nice stopping point on our way south. It seems remote but there is shopping and service nearby. There is plenty of room to get out and stretch your legs and just let the slower part of being elsewhere catch up and abandon the busy-ness of getting ready to go. A good start.