We stayed at Straits State Park in Michigan. One of three Michigan state parks on this trip so we bought an annual Park Passport as they call it here. It helps support the park system and we are glad to do it.

The park is nice, lots of trees and shade and in the middle of the week not full. It is right near the north end of the Mackinac Bridge so we expected that there might be a lot of road noise but not much. 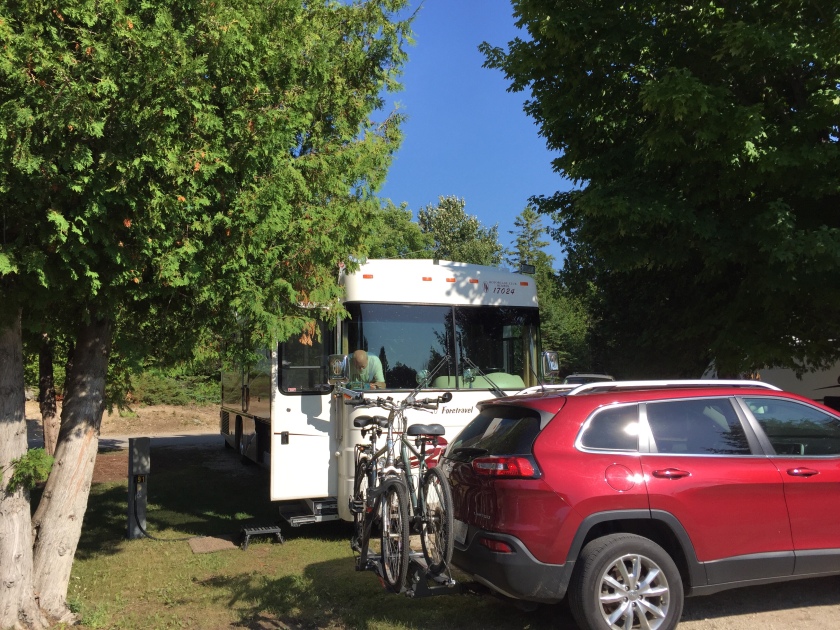 There were trails for hiking, none very long that led to some overlooks. 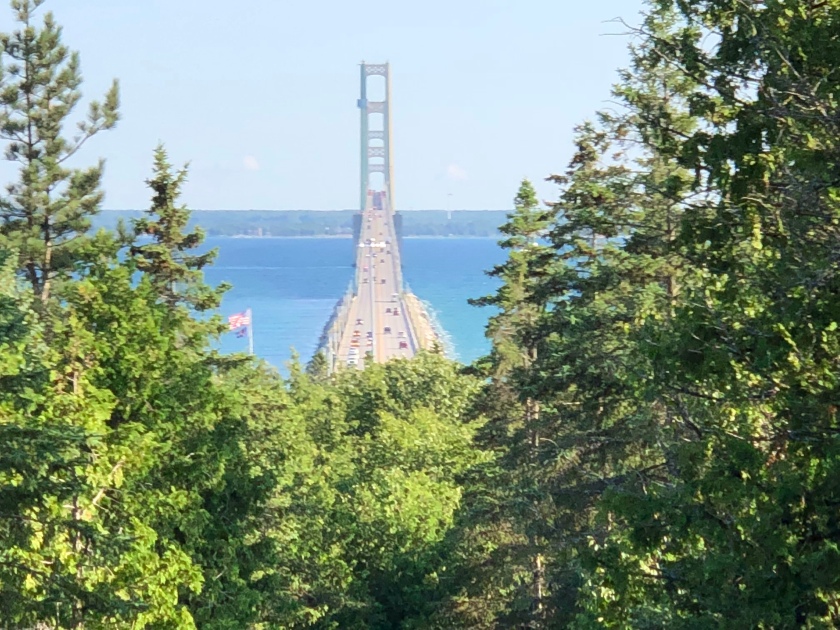 And past some rocky places with trees growing in surprising places. 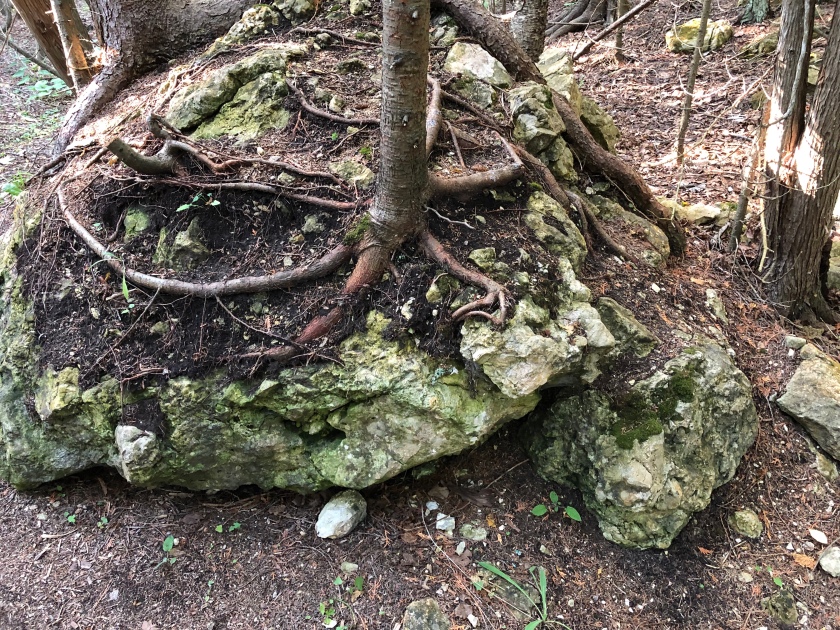 Further along on the trail we got to the lower campground which is close to the lake. A small beach provided a swimming spot and another bridge view. 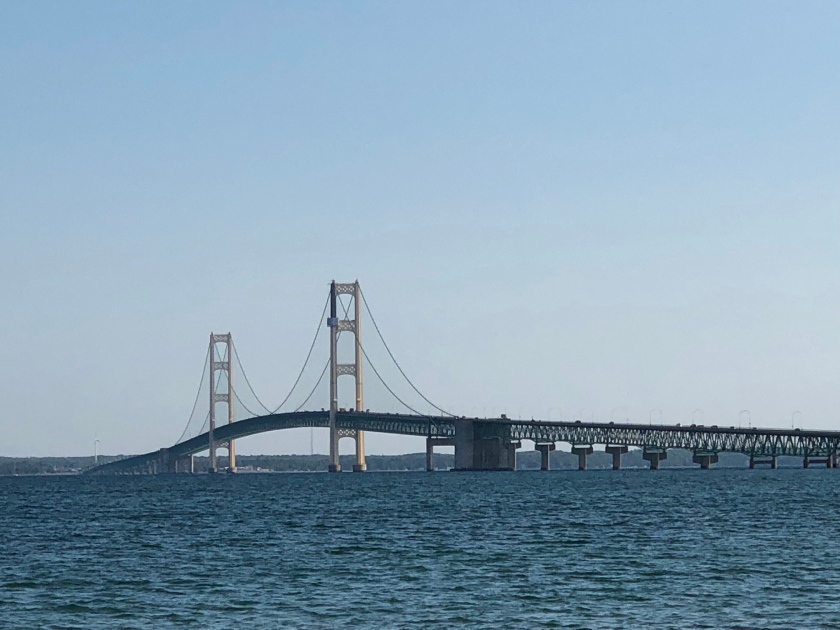 The suspension part of the bridge is more than 1000 ft longer than the Golden Gate Bridge in San Francisco. I watched a video about when the bridge was built in the 1950s. They worked right through the winters except for the very worst days. Wind, fog, ice, snow … Brrrr.

We sat in the warm sun for a while and watched kids playing in the water and a set of parents working very hard to deflate inflatable float toys long after the kids had left. 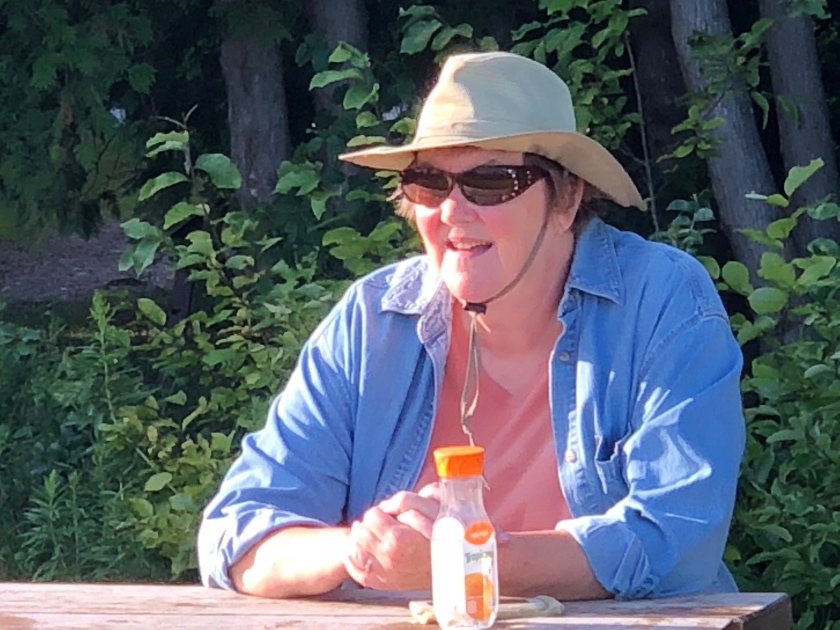 We drove into St Ignace one afternoon and wandered around. It probably has other things going on but in the summer it is 99% tourist stuff. There are a half dozen ferry boat docks for hauling people back and forth to Mackinaw Island and at least that many fudge shops for those who didn’t get enough over on the Island. And several t-shirt shops. We sat in a small park near the marina and watched boats go back and forth. There was a small beach, not sand but gravel more like we would see on Lake Superior’s North Shore. There is a nice Ojibwa cultural museum, worth a visit.

On the way into St Ignace we drove by a place called Suzy’s Pasties. Pasties are a common meat pie sort of thing in northern Michigan and northern Minnesota whose idea was brought here by miners from Cornwall. Not all pasties are the same, certainly not all equally as good. And in this area there are dozens of pastie shops.

We thought if we went to Suzy’s Pasties with Susan name we might get a deal. Well Susan forgot to say she was Susan and pasties are pretty much the same price everywhere. We got two and ate them for dinner. They were pretty big and really OK for store bought pasties. The ones Susan makes from her Mom’s recipe (no carrots, not ground meat but chunks) are always better but these were probably the best we have had up here not home made.

Next up a drive across the bridge into territories unknown.