We wanted to go see the Naval Air Museum at the Naval Air Station, Pensacola and the light house there as well. Our friends Bill and Jan Velting from Michigan were staying over at Fort Pickens, a National Historic Site on Santa Rosa Island which is part of the Gulf Islands National Seashore. That is a long way to see an old Civil War Fort that was part of the defenses of the entrance to Pensacola Bay where there were important Naval shipbuilding facilities and depots.

We made arrangements to meet them at the entrance to the Naval Air Museum, about 45 minutes from Orange Beach. Then we started checking on parking, is there a cafe there and that kind of details and it started looking like there were restrictions on getting in. The more we dug the worse it sounded so we finally called. Because of security issues at the Naval Air Station you had to have a current DOD issued ID to get in. We don’t have one. We checked back with Jan and Bill, they were looking for the same info and came to the same conclusion. Just no way to get in.

Plan B. We were half way there by this time so after a bit of internet searching we chose The Oar House in Pensacola for lunch. We all headed in that direction. It was a nice place on a busy waterway. Food was good.

We decided to go back to Fort Pickens to see what that looked like. Jan and Bill had driven from the campground down to the fort to see what it looked like. It is at the very end of a long narrow sand spit at the opening of the bay.

Fort Pickens was built in 1821 by the US Army using millions of bricks, lots of brick layers and slave labor. It was well armed with large cannons of the design of that era. There were large enough to shoot across the bay opening to bombard smaller forts occupied by the Confederate Army.

The outside walls were vertical with windows for cannons inside the walls. The walls were backed up by arched vaults. The arches we mirrored under the exposed vaults to form the foundations under the sand. 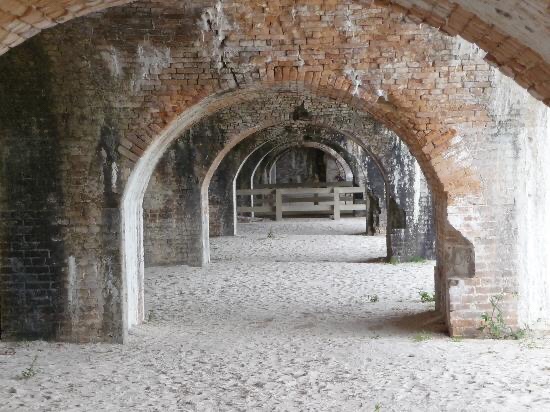 The giant Civil War cannons were out in the open and on circular tracks so that they could be aimed to shoot in the general direction of something. Shooting cannon balls wasn’t very precise.

By the end of the 1800s the fort was obsolete. Modern rifled artillery could easily penetrate even the thickest parts of the masonry walls. So the Army built a new Artillery Battery within the old Fort and equipped it with disappearing 12” guns that could shoot shells weighing more than 1000 lbs at approaching ships 8 miles off shore. That was assuming they could see them in the fog and mist. So there were also observation posts to help see better.

This wouldn’t have been my choice of jobs when the shooting started.

From the Fort walls looking across the bay we could see the Lighthouse at the Naval Air Station (NAS) and the red and white water towers near the Naval Air Museum. That’s as close as we got.

The Blue Angles are based at NAS Pensacola and starting in April the practice at the beginning of each week. This is a popular place to see the airshow. Missed that too.

When we approached the old Fort and the new one inside we couldn’t help thinking we had seen this before. The outside fort looks very much like Fort Pulaski near Savannah that we visited several years ago. It was also a masonry fort held by the Confederate Army. When the Union forces approached and set up their new rifled artillery at what seemed to be far out of range the Confederates felt safe until the bombardment began and the longer range, accurate rifled artillery shells almost destroyed the fort before the Confederates surrendered. The walls of Fort Pulaski are still full of holes.

And the newer inside Artillery Battery looked very similar to the ones we saw at Fort Stevens on the Oregon Coast near Astoria. They should have, they were built using the same basic plans adopted by the Army by the Army Corp of Engineers. The guns were the same. The walls looked the same. Deja Vu all over again. 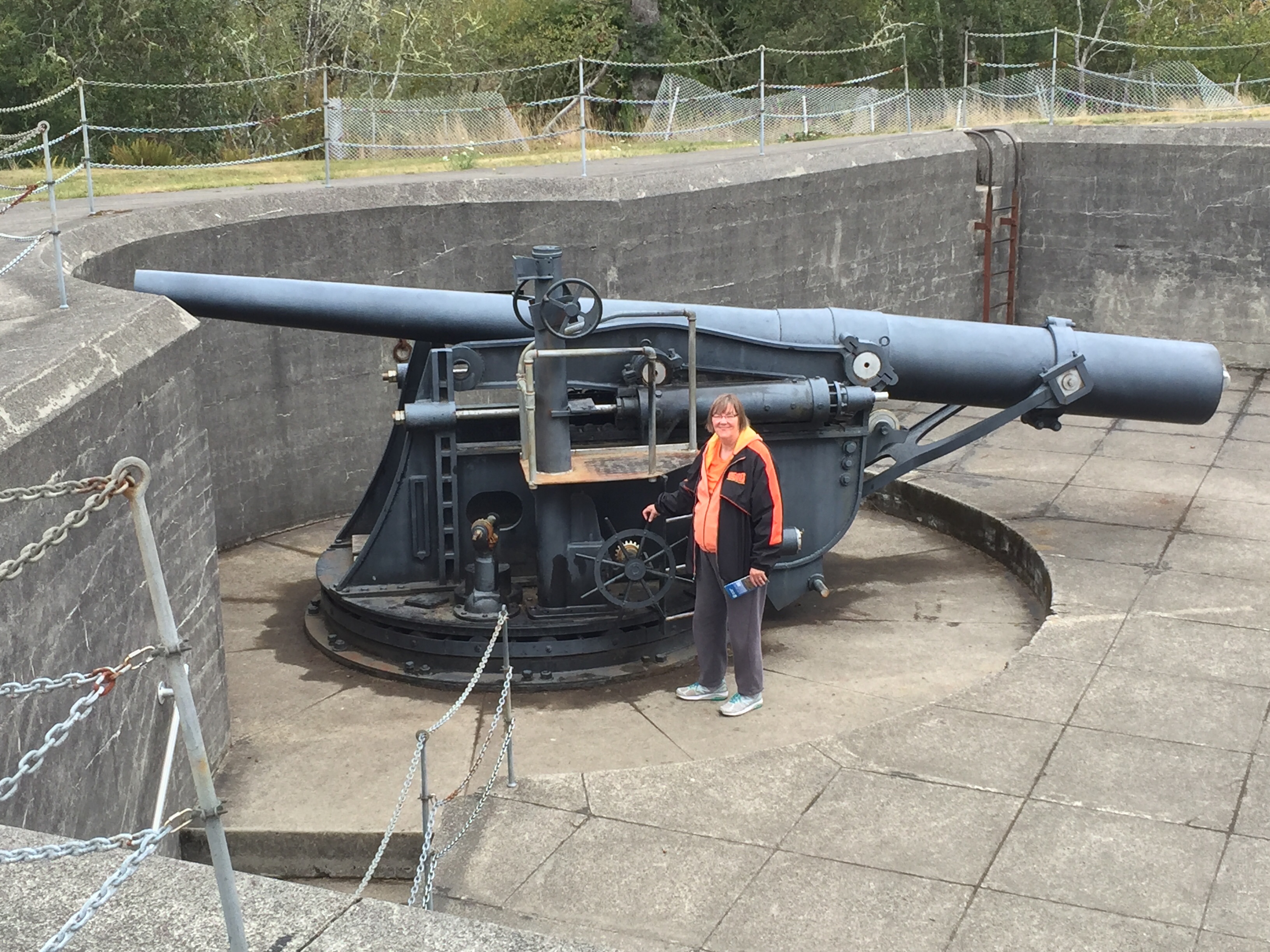 This is from Fort Stevens.

And at Ft Pickens.

The new guns were much more protected compared to the Civil War cannons.

We went back to Jan and Bill’s campsite. It was a nice campground with electric and water. Sand everywhere with brush and small trees. It was right in the middle of the sand spit, water in either direction just a couple hundred yards away. Jackets on for a cool and windy day. 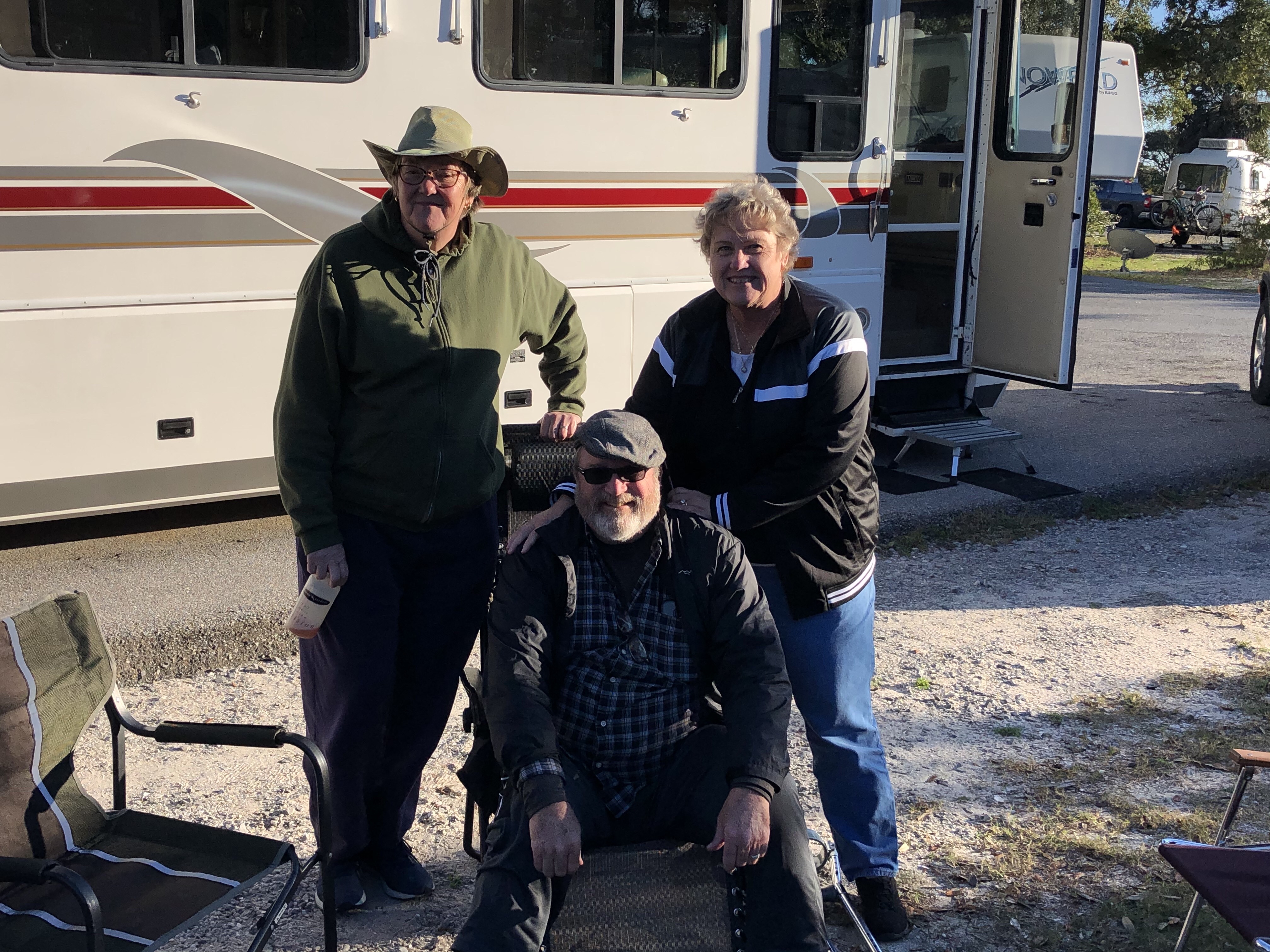 We met Jan and Bill several years ago at Maumelle COE Park in Arkansas. They are from the mitten part of Michigan and head anywhere warmer and ice free in the winter. We sure enjoyed their company and are very pleased to see them on the road.