If you have never visited Charleston then do yourself a favor and put it on your list of places to see. I don’t think I would come in the summer, probably hot and humid, outside of most of our experience. This time of the year is pretty nice, the flowers are blooming, the annual home and gardens tours are on and the temps are pretty comfortable.
We normally would rather be not in the city but they are fun to visit for a few days.
We took pretty much all back roads from Savannah to Charleston.  We went by the giant four lane expressway into Hilton Head Island, didn’t even think about going there.  Highway 17 into Charleston is    a very busy and congested road.  Our campground is about 20 minutes from the historic district of downtown, not all that far but mostly city streets.  Charleston has the longest cable stayed bridge in the world, about two miles long.  We will be going over that bridge on our way to Asheville on Wednesday. Susan will have her eyes closed. 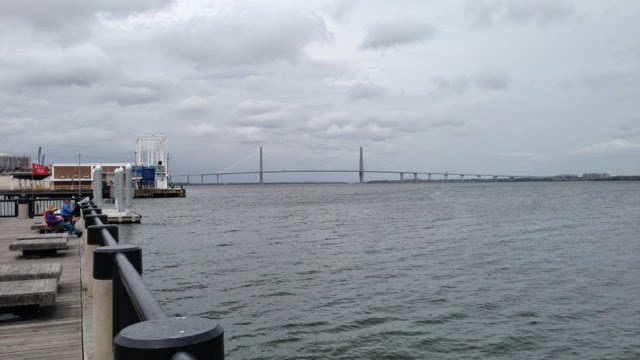 There are lots of things to see and do in Charleston. We have been to Ft Sumter on an earlier trip so we didn’t do that. The USS Yorktown aircarft carrier is now a museum one can visit. Probably going to miss that too. Seen one aircraft carrier, you’ve seen them all, right?
The Civil War submarine H.L.Hunley was discoverd in 1995 and recovered in 2000. It was the first submarine successfully used in combat operations when it sank the Union blockade ship the USS Housatanic, in February, 1864. The Hunley placed a 135 lb black power charge near the stern of the target ship and backed off several hundred feet to detonate the charge equivalent to a single stick of today’s dynamite. The charge was right under the Housatanic’s powder magazine which burned fiercely. The Housatanic sank in a matter if minutes.
The Hunley disappeared itself under a cloud of mystery. No one really knows what hopened. The author, Clive Cussler and his NUMA foundation found the Hunley about 1000 ft from where the Housatanic was sunk.  The Hunley was recovered after extensive archeological investigation and brought to a University of South Carolina facility for conservation and study.  It now rests in a 90,000 gallon pool of water. Ther water is drained to work on the study and conservation effort and the refilled. They use a special water that helps remove the encrustation on the cast iron ship.  Several hull plates were removed to recover the 8 man crew still inside at their stations alongside the hand crank which turned the propeller. They were remarkably preserved including clothing and other personal artifacts.  The crews remains were buried in a nearly cemetary.  About 50,000 attended the services. 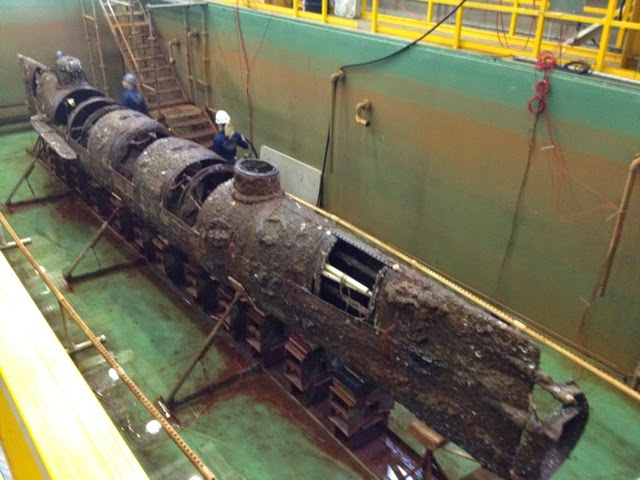 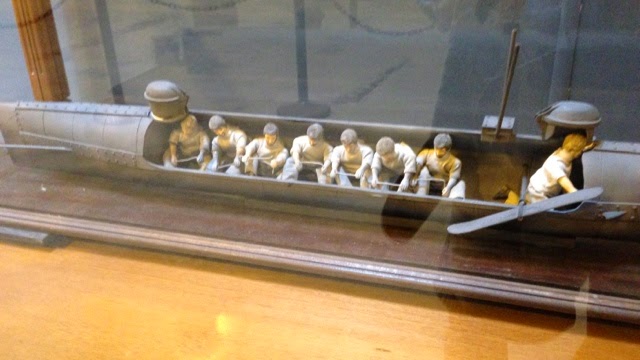 They are soon going to replace the current water solution with one that contains the same chemicals as Drain-O. This will speed up the removal of deposited crust.  Then they are going to another solution that will speed up the removal of salt from the cast iron.  Surprisingly, cast iron is porus and when under water it is infused with salt.  Taking a cast iron item out of the ocean and drying it out leaves the salt embedded in the iron and it rusts very quickly from the inside out.

So now we have seen two turning points in miltary history related to the Civil War.  Th first use of rifled cannon and the end of msonary fortifictions and the first use of a submarine in combat.  It will not be until WWI when a submarine sinks a ship again in combat.
Charleston is a very old city first settled in 1670.  The first decisive victory of the Revolutionary War was  fought here at Fort Sullivan.  The worst defeat of the Americans happened here during the Seige of Carleston.  The Civil War got under way at Fort Sumter. The Union bombarded Charleston for 584 days during the Civil War. It has suffered from several mjor hurricanes and even a major earthquake. And for all of that there are beautiful parts of the historic disrict to explore. The streets are narrow and congested and parking is not easy. There are many historic homes some turned into museums and many still lived in.  There are walking tour maps that lead you around the maze of streets and alleys.  Most take two to three hours. 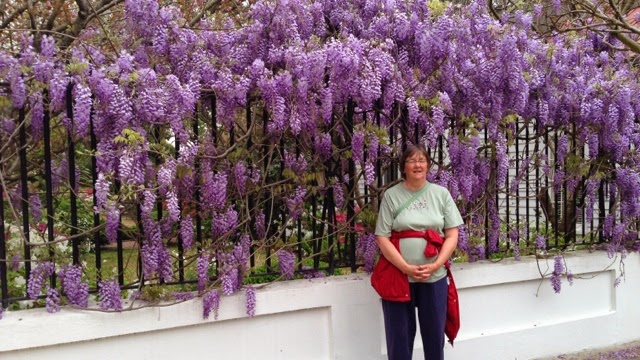 The Wisteria are blooming. We visited the Nathanial Russell house. It is a three story brick mansion with three rooms on each level, one of which was oval. An oval dining room on the first floor and a very formal family parlor.  One bedroom on the second floor, more on the third.  There were kitchens, work shops, carrige houses, stables and quarters for the 18 slaves who tended to the gardens, the house and the family. 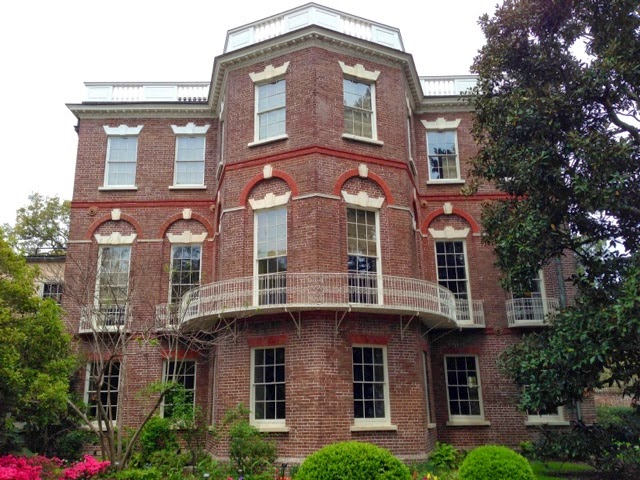 The front door looked like mahogany and inlays. In fact it was painted in the French trompe l’oeil method (fool the eye) to simulate wood. There were many other examples of this in the house from differnt types of wood to marble even to plaster details. 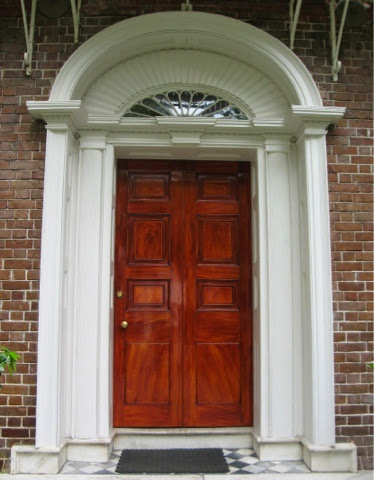 The elliptical stairway is probably the home’s biggest claim to fame. It winds up to ll three floors.  The medallion in the ceiling at the top is painted in two dimensions but looks very three dimensional. 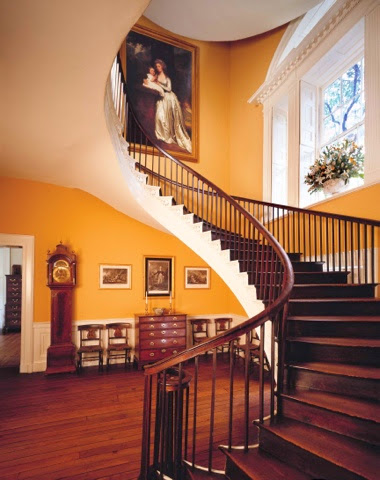 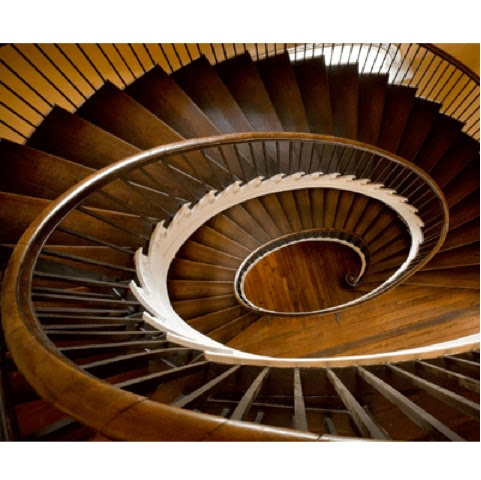 From the top the shape is quite evident.
Then off to the City Market. It is a four block long set of buildings filled with art and crafts and of course food and the typical tourist stuff. Beautiful art, baskets and pottery. 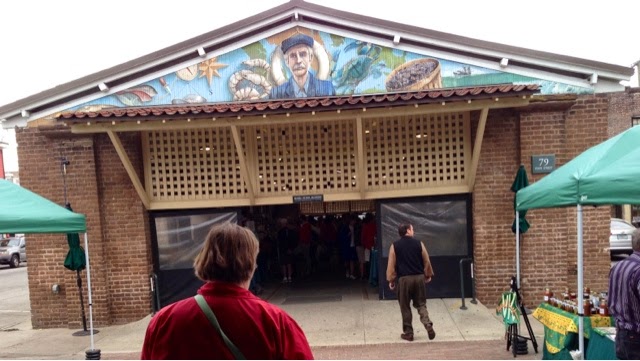 We managed to buy nothing but may go back for a sweet grass basket.these are like pottery. Some good, some great, some done by well known artists that are signed and dated and prices that can range from $50 to $1000 for what looks to the casual shopper as if they were identical. 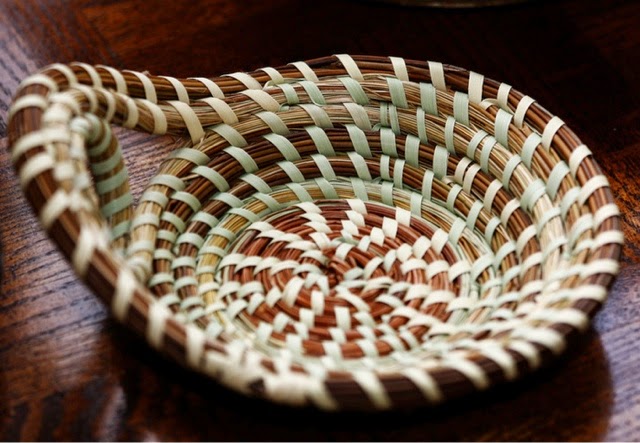 They are very attractive and surprisingly heavy.
More walking. More houses. Some so big it is hard to believe one family lives there. 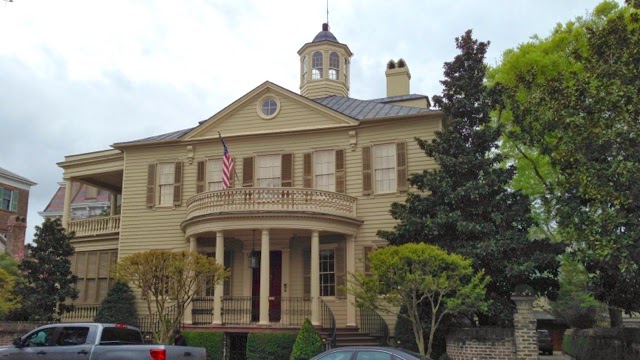 The typical Chrleston home in the historic district is built on a narrow lot with the side of the house facing the street and the front going down the depth of the lot with porches on each level and gardens in every spare space. 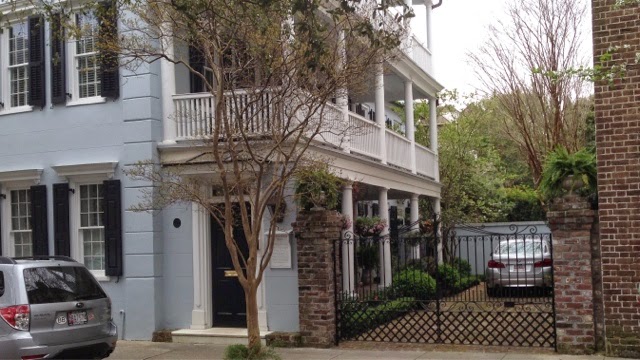 The front faces toward the harbor to catch any breeze.  Iron gates are prominent in Charleston.  Many were built by Master Blacksmith Phillip Simmons whose work was featured on the PBS series Craft in America. 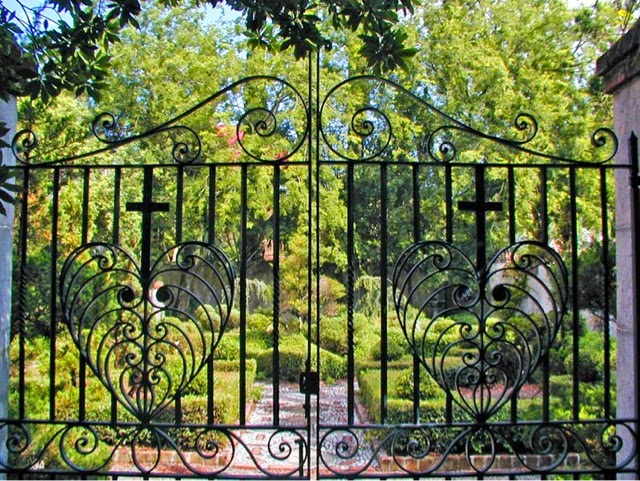 Almost every home has gardens. 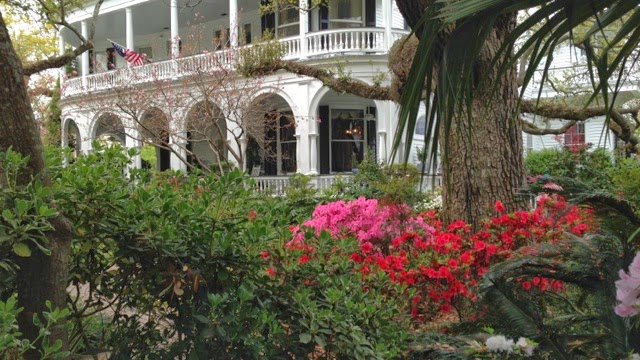 Down little alleys between homes were beautiful interior spaces. 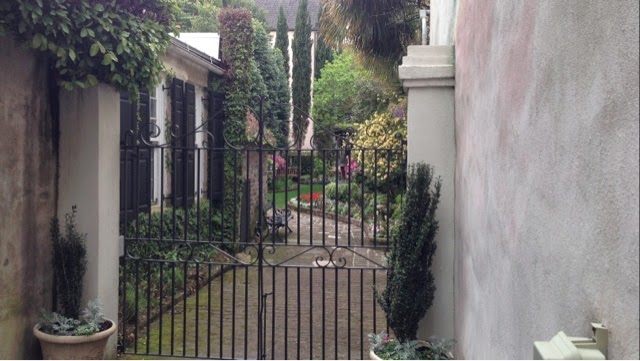 Thre streets were mostly very old granite cobblestone.  Art in its own right. 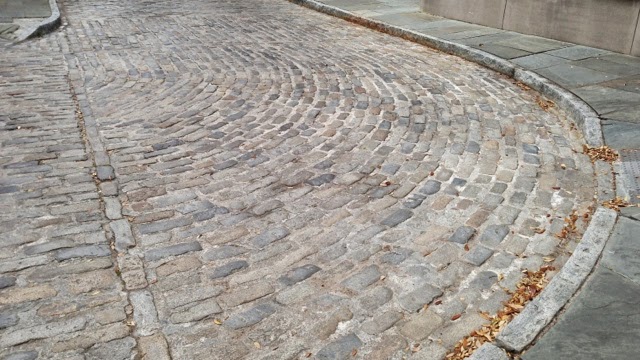 And of course we sampled some local grub at Magnolia’s. Wonderful. 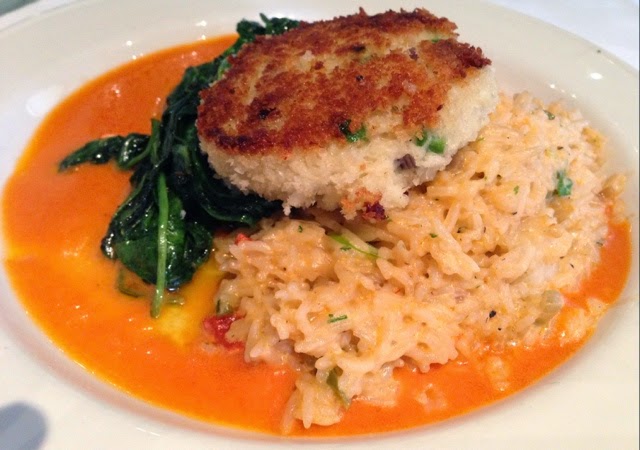 Crab cakes on rice cooked with shrimp (pirloo), spinich and a tomato butter sauce was Susan’s choice.  I had a grilled sandwich with fried green tomatoes, bacon, lettuce and pimento cheese on a whole wheat corn bread.  We skipped dinner except for the four oatmeal raisin cookies we baked when we got home.
It rained over night (Monday) and most of this morning (Tuesday). Good time to get this posted, do some laundry and maybe head down to the Market again.
We had two dining experiences we wanted to try on this trip. One was a Waffle House, did that. The other is a Chick-Fill-A something. I assume they serve chicken. We have seen only a couple and they were not convenient. We saw on yesterday that we might try, or not.
Tomorrow we head for Asheville, NC about 220 miles away.  Should take about three days to get there at the rate we are going.
Roger and Susan
PS: Please send Susan an email and encourage her to post something.