The south side of the Great Smokies is probably like the North Rim of the Grand Canyon. 90% of visitors go to the other side. So that is usually our choice, go where the crowds aren’t.

We chose a small campground in the Cherokee Homeland on the south side of the Smokies. It is up in the mountains on a fast flowing trout stream. Very quiet but only a couple miles to the main south
entrance to the park. The view front the front window was pretty good. 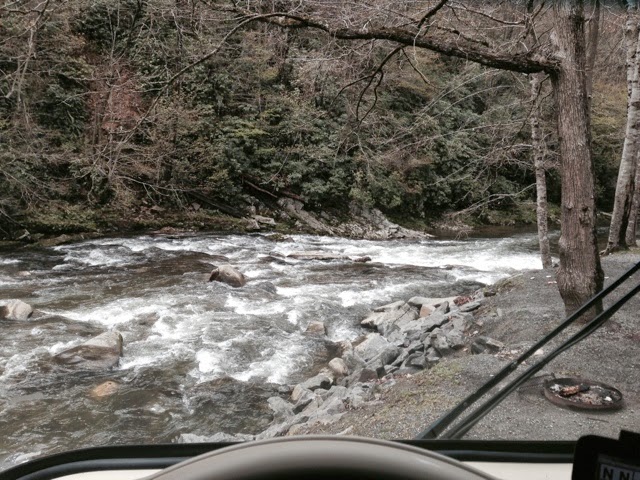 Just upstream a small waterfall entered from the side. 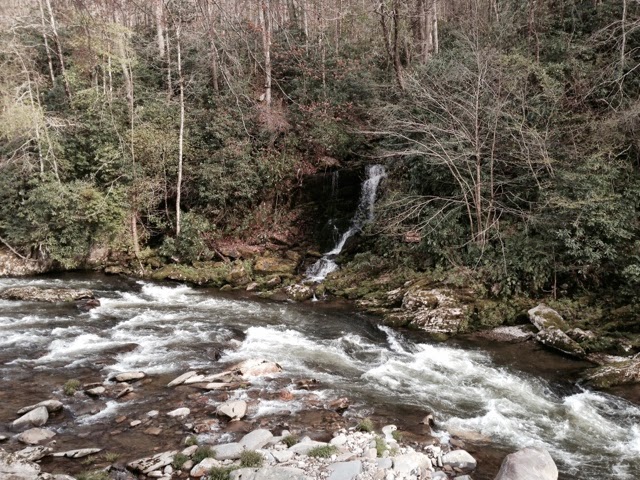 A wonderful background sound. I trid to put in a short video but it seems I can not do that. 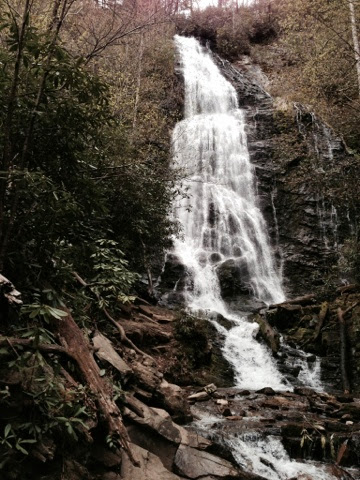 This is one of the highest falls in the Smokies.
At the Oconaluftee Visitor’s Center at the south entrance there is a collection of buildings from the park that represent a typical farm from the early 1800’s to about 1900. Most early buildings were log srtuctures built from huge logs that were split over and over to get slabs about 4-6” thick.  Barms, a homestead, a blacksmith shop, a sorgum mill, a meat smoking shed and meat storgae building, corn cribs and animal buildings.  This area was settled from the early1800’s.  Timber companies bought up huge tracta of land. It was heavily logged and many areas were stripped clear of timber.  The destruction of the natural habitats were the main motivations to create the park and protect the land. 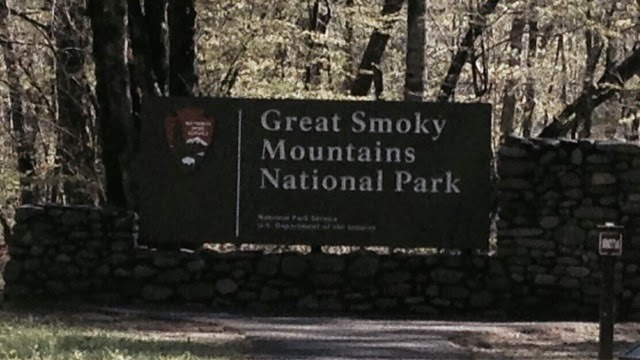 The Great Smoky Mountains NP was established in the 1930’s from land purchased by North Carolina and Tennessee that was donated to the Federal Government for the park.  Most land owners sold and left. A few sold and were allowed to stay while they were alive.  There are buildings remaining throughout the park that are maintained as a historical sites. Most of the roads and bridges, visitors centers, campgrounds and overlooks were built by the CCC from the ealy 30’s up to the start of WWII. A few of these camps were manned by conscientious objectors who continued the work and protected against forest fires. 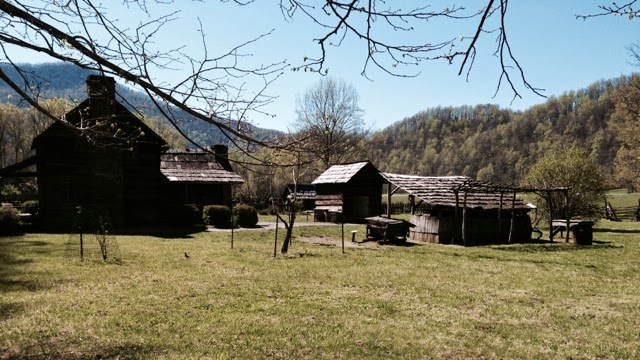 A good splitter could get several slabs from one large tree.  Some of these pieces were 20″ across. The log would get split down the middle and then one slab split off each side.  Then one llog slab would be used on one side of the cabin and the other on the opposite side to keep things sort of even. All of the logs were notched at the ends with dovetails to lock them together. It was amazing how tight some of those hand cut joints were.  Smaller pieces were nailed on the inside to cover the gaps between the logs. Mud was used to fill the gaps from the outside. Shingles were all hand split. Sawn lumber was not available until the late 1800’s so it was cut from logs with axes and shaped by hand to get what was needed.  Hardware was mostly hand made. Nails were expensive and hard to come by. 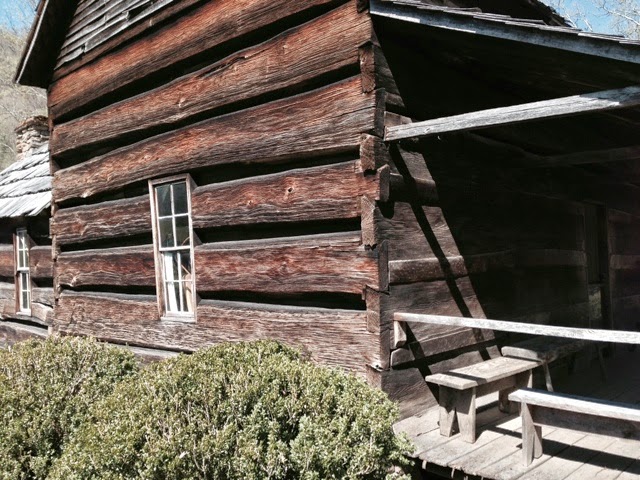 Fences like these went on for hundreds of yards around almost every cultivated area. Deer, elk, black bears, wild pigs and just about everything else could ruin a family’s crops if they werent protected. Can you imagine the effort to split all of those pieces? 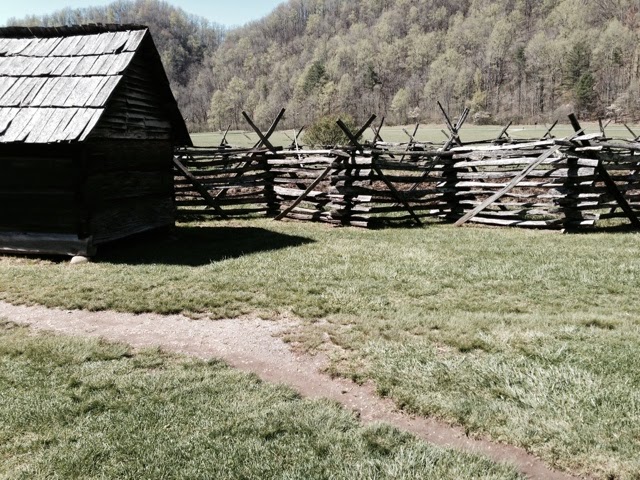 Nearby was the Mingus Grist Mill where it had stood since the mid 1800’s.  It is still operating today. 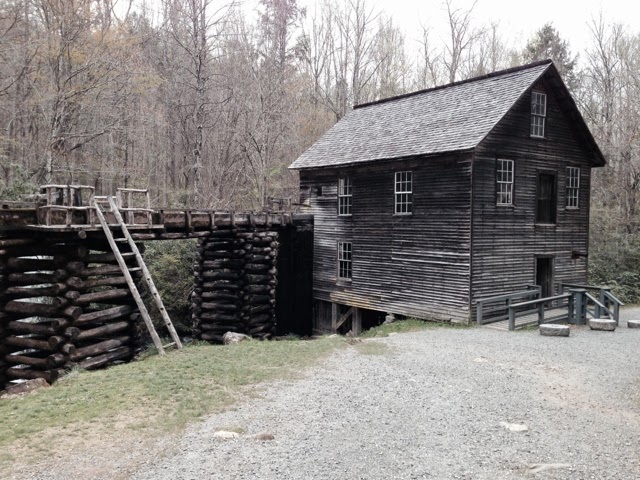 The building has been restored to preserve it.  Water flows down from a crude dam up stream through a rock and wooden channel and then down the wooden flume.  Unlike several other mills in the park this one has no water wheel. The water flows into a vertical wooden column down to a cast iron horizontal pipe to a turbine which is spun by the water pressure and flow. These were able to operate on less water than water wheels. A gear box and leather belts and pulleys drove a vertical shaft that went all the way up to the third floor of the mill.  More pulleys and belts drove several different machines used to clean the wheat or corn, grind it using big stone grinding wheels, sift, sort and grade whatever was ground and then send it down little wooden chutes into bags.  Lots of rattling. We bought a small bag of ground corn for corn bread. It made a tasty batch.
There is only one north-south road through the park.  It is a 35 mile steep twisting mountaing road.  We drove up to the top in the Jeep.  Lots of turn outs and overlooks. The Appalachain Trail crosses the road at the summit. 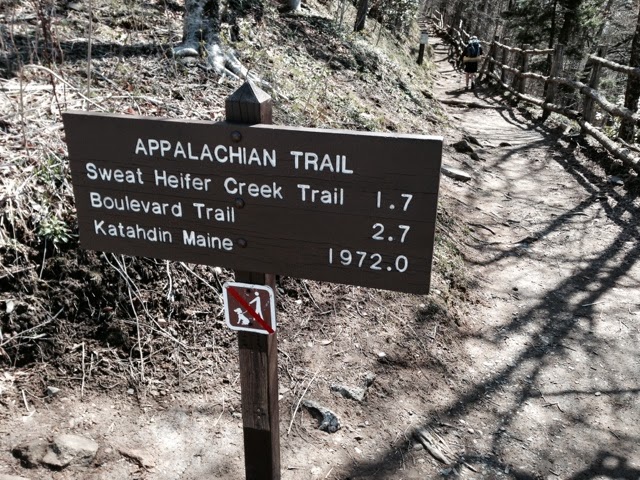 Near the summit id the road to Clingman’s Dome. At over 6600 ft it is the highest point in the Apalachains.  Another steep drive. And then a half mile hike up a 12% grade (that is steep) to a lookout tower.  Susan declined to go out on this. These sort of things make mer nervous. I held on although it seemed pretty sturdy.  Long way down.  The Appalachain trail crossed this summit as well as it winds its way along the top of the Appalachains along most of the east coast 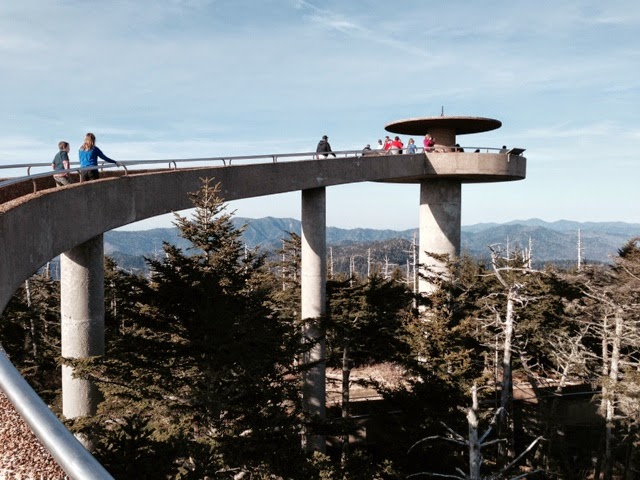 The views were great and it was the only place in the Smokies where cell phone service had 5 bars.

The Smokies are called that because of the layers of color and the mists and clouds. This is mostly caused by moisture in the air.  There are so many streams, the vegetation is lush and there is a lot of rain. Mist and fog is not uncommon. Because the park is further south and it has such a wide range of elevation is is one of the most diverse ecosystems in the US.  There are moss covered logs with ferns all around to big stands of Larch trees at high elevations more typically found in Canada.
It is Springtime in the Smokies.  At lower elevations the leaves are out, flowers are blooming and colors are those amazing early spring greens.  At higher elevations, this pine trees stand out against the rest of the trees with buds and early leaves.  The south side of the park on the south side of the mountains seemed behind the north side where everything was much greener.  Not what one might expect but it is much less steep and has many more areas flattening out towards the north. 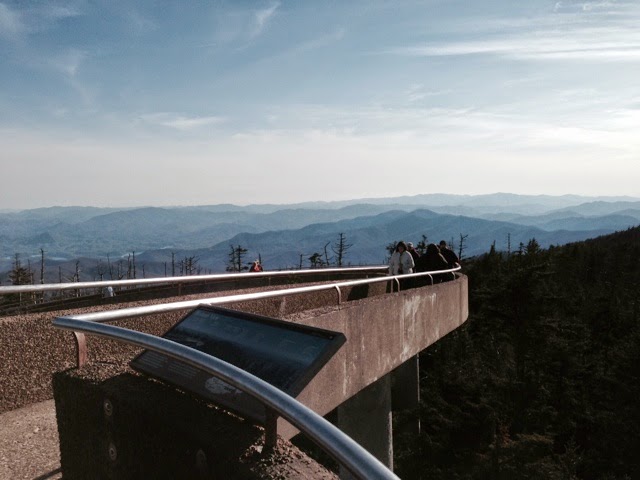 Well I better get this posted, it is getting long.  Still more to come.
Roger and Susan