Bowling Green seemed like a good next stop. Less tha 200 miles away from Oak Ridge and mostly along easy going parkways.  So we were hoping to see green farm fields covered in grass and majestic horses, it was Kentucky after all.  And what better place to head to than Bowling Green, sounds like what we were looking for.  Something about Bowling Green made me think there was something there to see. I had to think about it for a while and then it dawned on me, Corvettes!

A look online told us the Corvette Museum was there as well as the Corvette Assembly Plant. Tours were available, reservations were made and a time and destination was in hand. Nearby there was an RV campground that sounded interesting. It was at an amusement park.  Turns out the amusement part was not open for the season yet so,there was almost no one in the campground. It started out on a farm with a farmer who bought an old wooden roller coaster and put it in his back yard behind the barn.  Now it was a full scale amusement park with a drag strip and an oval race track, a 500 site campground and buildings everywhere.  The farmer lives nearby in some grass covered rolling hills  surrounded by miles of perfect wooden fence counting his money and going for a ride whenever he wants to. 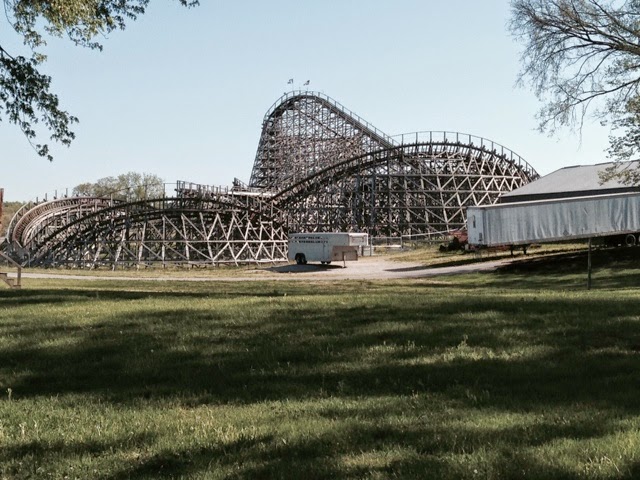 On the way into Bowling Green you see Corvettes by the truck load. Not too many on the road though. 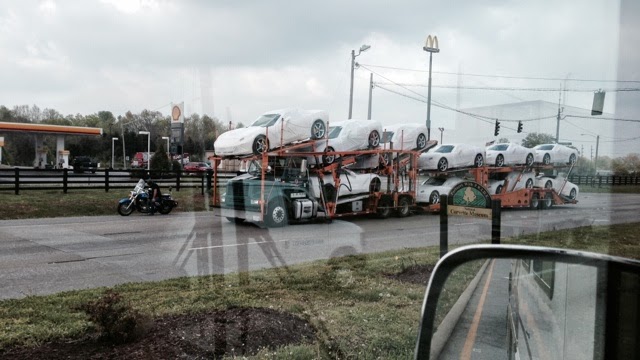 10 on this truck.  And the Museum, where Corvettes get to park in front.  We parked in the rear. 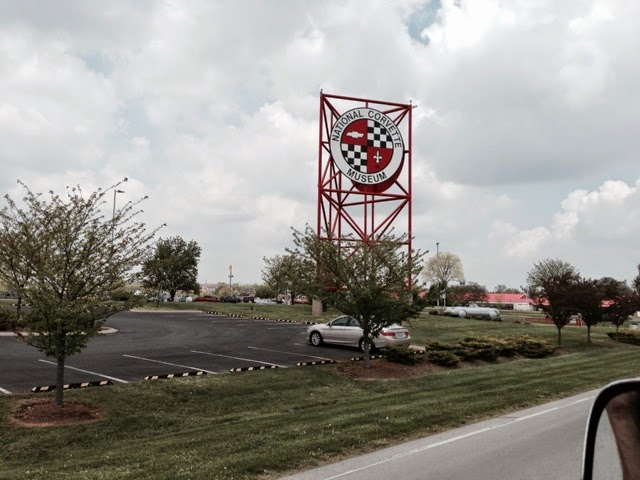 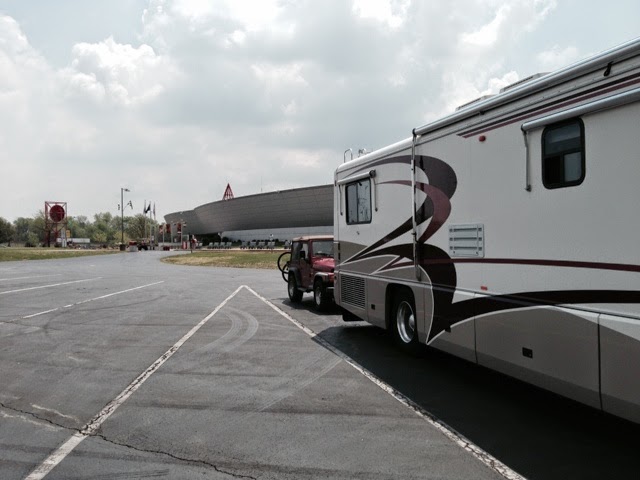 The museum followed the history of the Corvette from 1953 through today. It showed production cars, prototypes and racing versions.  There were only 300 1953 Corvettes, all white with red interiors. 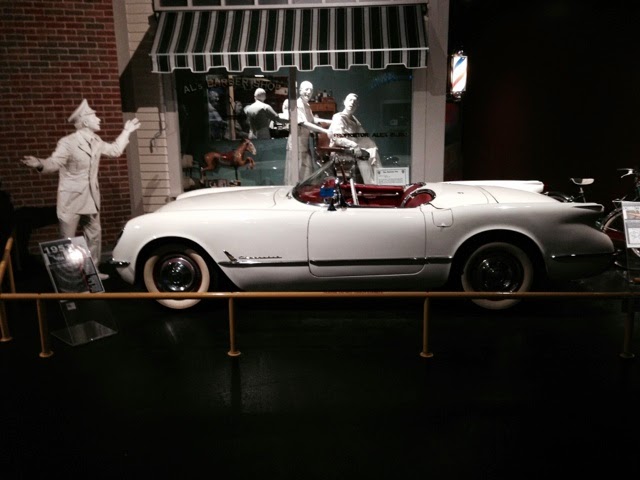 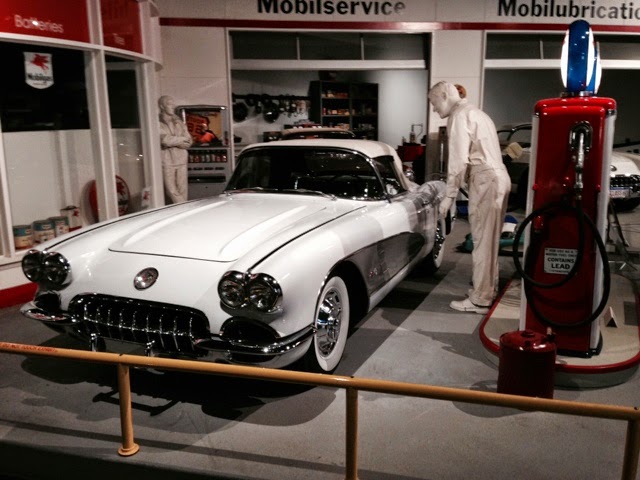 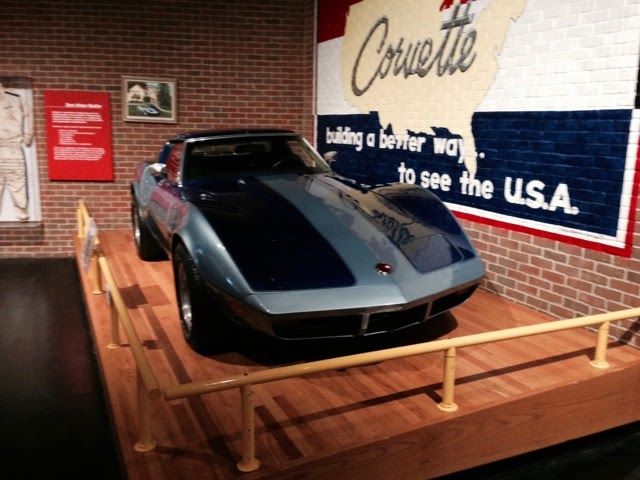 This image was pretty neat, made up of thousands of very small images. 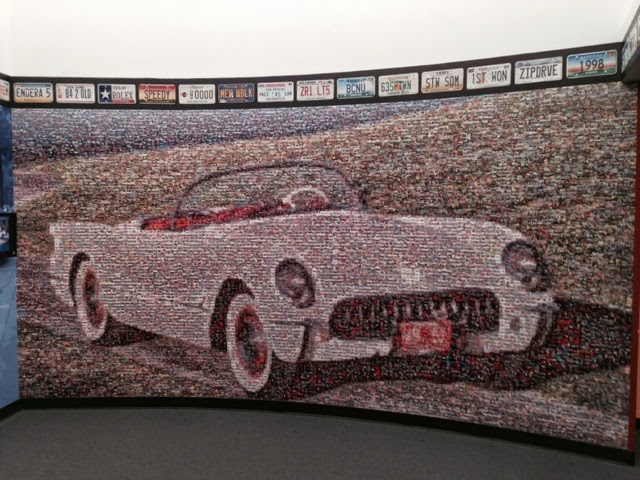 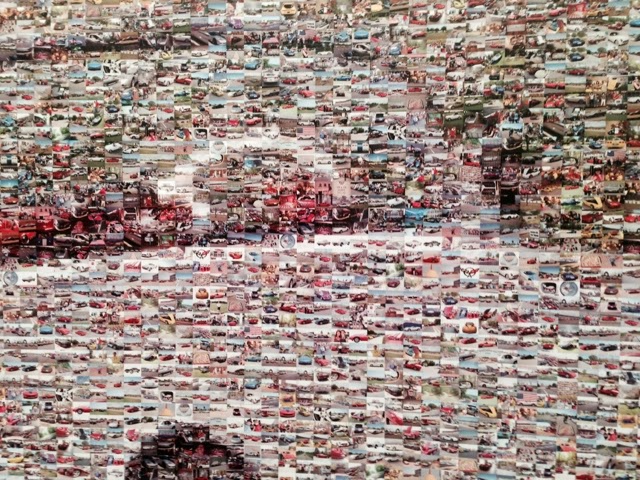 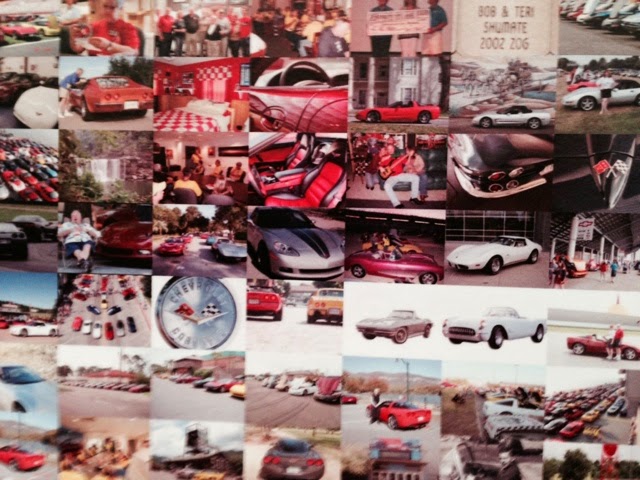 Most of the cars on display belonged to the museum, donated by owners, one by Ray Orbison for example or on loan by their owners.
There was one section of the museum where there were no cars, just a big hole. It was swallowed up,by a sinkhole within the last year. 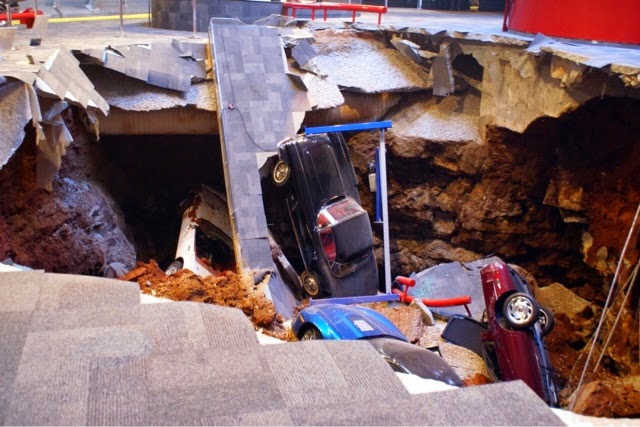 Many cars were crushed, almost all beyond repair.  They are going to try to restore a couple, a tough job. 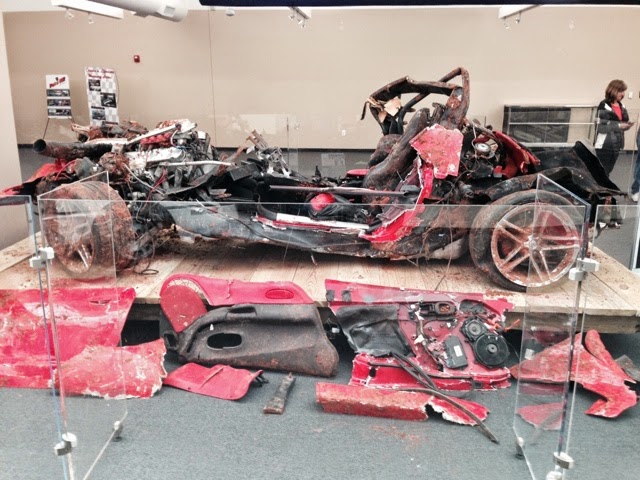 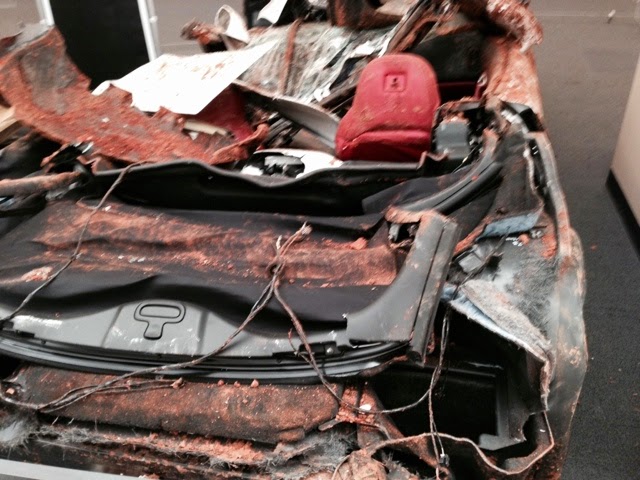 On to the factory where there are no photos allowed. You couldn’t even carry a cell phone or a purse or any bags, nothing.  So descriptions …
The Corvettes are built in a 1 million sq ft assembly plant.  It used to be a Chrysler pland until the early 80’s when GM bought it to make the Corvette.  Before that they were made in Flint Michigan and then St Louis.  About 700 people work at the assembly plant.  500 are assembly workers.  They work one shift, 10 hours a day right now because demand is high.  The body and paint line work two shift becaust those processes take longer and have to keep up.
The main aluminum frame parts are made elsewhere but the frame is built in Bowling Green on one robotic assembly line.  Robots do every thing and handle almost all of the parts. This feeds another line where the interiors and most if the stuff you don’t see are added including rear body panels.
This whole thing moves along on a conveyor system where the doors are added.  The doors are made on a separate assembly line which feeds the correct fight and left door for each car on the correct side as it moves down the main assembly line.  The engines, teansmissions, front and rear suspension, and brakes come down a different line and the two merge one on top of the other.  Then the front body panels are added as well as the wheels.  All of this is still on the conveyor system.
It almost looks complete at this point.  3.5 gallons of fuel, coolant, brake fluid and all of the other fluids are added and the engine is started and run for about 6 minutes.  At this point the Corvette goes through some very bright light tunnels where everything is looked at by several inspectors.  Another station has several people who try everything out several times.  They check everything. Then another inspection station for body panel fit.  If there are any problems they are fixed as they go or noted.
Finally wheels are on the ground, a driver drives off the assembly line over a series of bumps that shake the car pretty well and into a test bay where the car is on rollers. It is accelerated, slowed, braked and run through about 6 minutes of a preprogrammed tests that the driver follows. More than 800 tests are done on the car while this test is run. 98% of Corvettes pass all 800 on the first try. If not they are pulled aside and fixed and retested. They must pass all tests in one test to get beyond this point.
Then there is a 14 mile test track that shakes, rattles, rolls and twists the car while a specially trained operator listens for noises and squeeks. Anything they notice is fixed and the car retested.  Then the car goes into the rain tunnel where 25 gallons per second of high pressure water with 40 mph wind is blown on the car for four minutes to look for any leaks.  Any found are fixed.  After all of that, they are cleaned up, wrapped up and ready for shipping.
135 Corvettes are completed each day.
Engines are built one at a time in a special section of the plant. Each engine is entirely built by one person who signs his name on the engine.  Unless you buy the build your own engine option.  Then you come to the factory and work with an engine specialist to build it yourself.  I guess it gets your name on it.
There is a baby book option as well where a photographer will follow your car through the assembly process  and document its coming to life, step by step. You get a Baby Book.
There is also a take delivery at the museum option where they make a big deal about you getting your car and then you drive over to the plant to a special area where they take pictures.
The 2014 Corvettes start at $58,000 and quickly go to over $127,000 with just a few options.
The most popular color is red either as a coupe or a convertable. 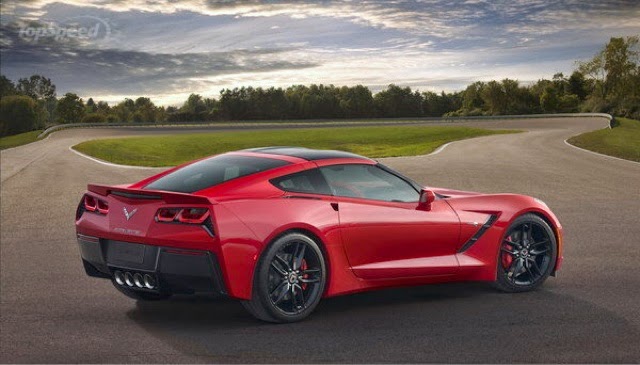 We both were attracted to the Green with tan top convertable. 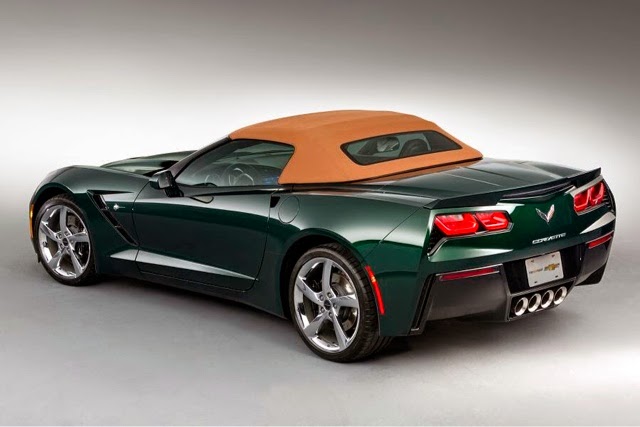 A new model,is being added for 2015 which will have a wider more race car like body and super car engine, suspension and drive train components. And a Super Car Price I am sure. 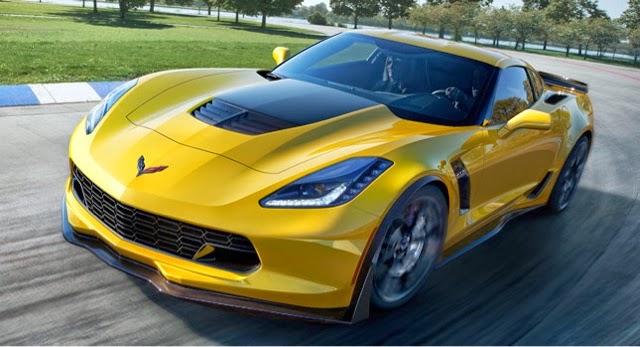 So we are overwhelmed. Spectacular cars, beautiful cars. But not quite our cup of tea.  Not much room for camping gear. The tour guide kept going on about how many lb-ft of torque these cars have.  At best it is about 1/3 of what our coach has.  But then the engine and transmission in our coach weigh more than a new Corvette.  Oh well, hard to brag about anything.
A very fun stop.
Now we are off to the land of Lincoln. Springfield, IL. Or is that where Bart Simpson is from?  Is that a glow we see in the distance?
More later.
Roger and Susan