The capital of Illinois is Springfield. It is also where the Illinois State Fair is located. Most state fairs have campgrounds as does this one. So that is where we stayed right near the center of town, the Lincoln Home, the Lincoln Museum, the Lincoln Library and the Lincoln Memorial. Lots of Lincoln stuff to see and do. 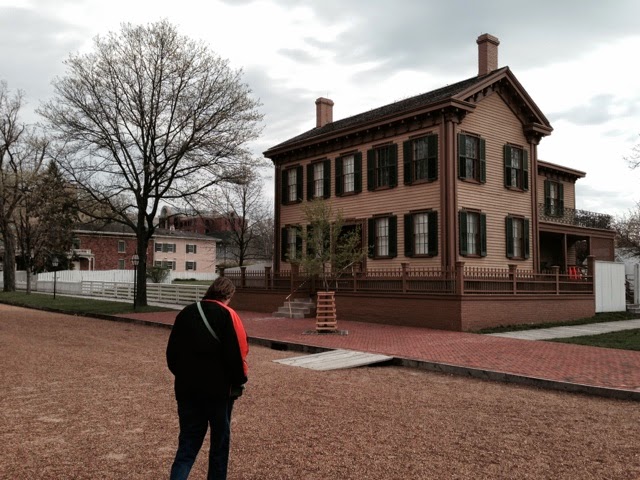 Lincoln bought this home for his family about 1845. It was smaller when he bought it.  He was a fresh new lawyer. As he became more successful he and Mary added the second story and on to the back of the house as well as children. Lincoln added the wall and fence along the street. This neighborhood at the time had just a few homes on each block, most had barns and animals, pigs were common. The roads were dirt. Lincoln’s law office was next to the state capital and close enough to walk to it every day. 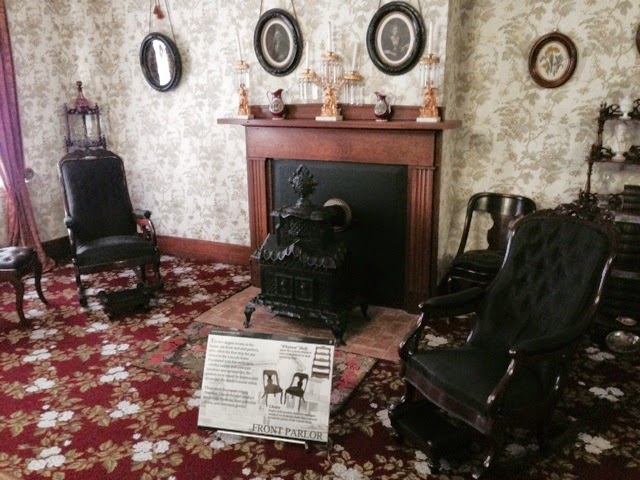 The house is the only one the Lincoln’s ever owned. It was owned by several other people and then the State of Illinois before the National Park Service bought up the four blocks around Lincon’s home are restored the neighborhood to the way it looked when lInclon was elected President.
The house has been restored so that it looks as it did in 1860 and reinforced to withstand the hundreds of thousands of visitors who go through the house every year. They have added electric lights, security systems and fire sprinklers.
The house was decorated in what was called a patchwork or crazy quilt or kalidescope of color.
Black and white were the decorating scheme in the decades before and with the coming Victorian age and the availability of color, they went for it whole hog. Very busy wall paper, buzy fabrics, wild color mixes in carpet.  Pretty goofy looking but then life had been so dull before, why not? 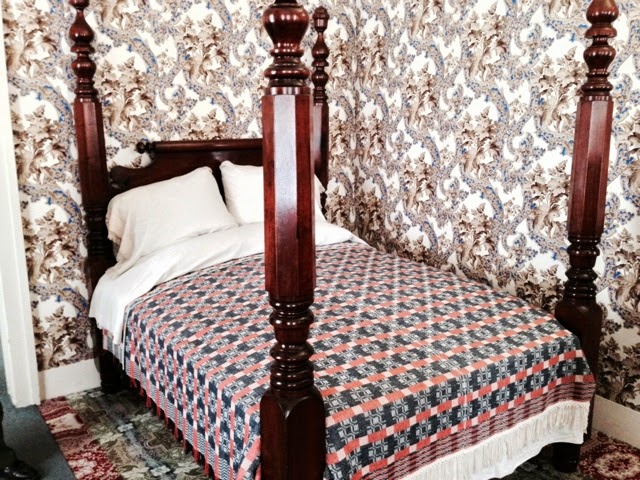 This is actually Lincoln’s bed. Mary had her own bed/dressing room, not uncommon at the time. But they did have 4 children so … 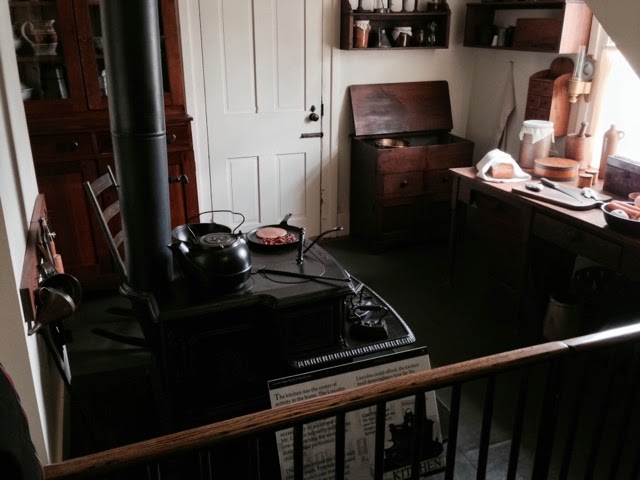 A pretty basic kitchen but it was inside of the house.  Having the kitchen in the house was fairly new at that time. Kitchens caught on fire frequently. Keeping then away from the main house kept the main house from burning down. Cast iron stoves started changing that. In a great leap forward in mocernization all of the fireplaces in the house had been bricked over and small stoves installed.  Cleaner, safer, the pinacle of modernity for the time. 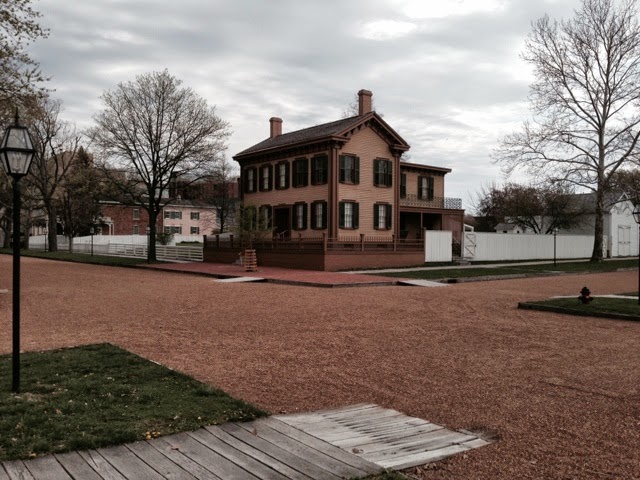 As it was in 1860. Lincoln was nominated by the Republicans to be their candidate for President at their convention in Chicago. Unlike today, he was not there and a committe came to Springfield with the news and the offer of nomination which Lincoln accepted.

His five years in office took a terrible toll on both him and Mary.  They lost a second child while in the White house. The Union was breaking apart even before he was sworn in. The Civil War was long and difficult. He held fast to what he considered his utmost duty, preserving the Union. 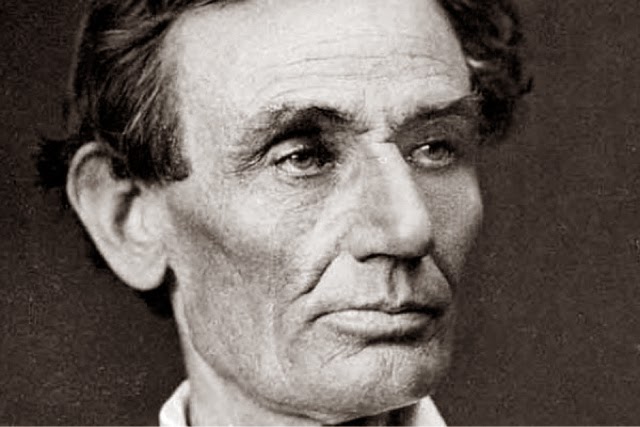 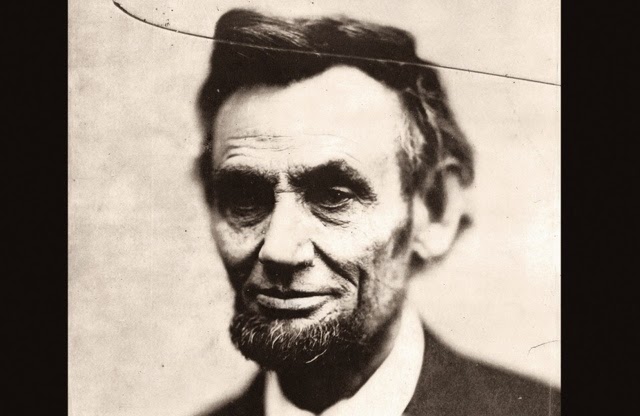 And perhaps the last photgraph taked of Lincoln while was alive just five years later.
A difficult job for anyone.
There is also the Lincoln Museum and Lincoln Library.  There is a Lincoln in Hollywood as well where all of the trappings of movies mad about Lincln are on display.
The Museum was like several we visited on this adventure, a serpentine path through time with each area a different time.  They stared in the famous log cabin where he was born and went on to his general store to his first law office in Springfield, meeting and marrying Mary, their home in Springfield, losing their first child to TB, his election, the ravages of the Civil War, the Emancipation Proclamation, his reelection, finally the end of the Civil War was near, a night at the theater, his assassination and death, the funeral train and fianlly home to Springfield. It is hard to imagine how a person could hold up and hold true through all of this. The right person at the right time? We should all hope so for if it had turned out differently where might we be today? 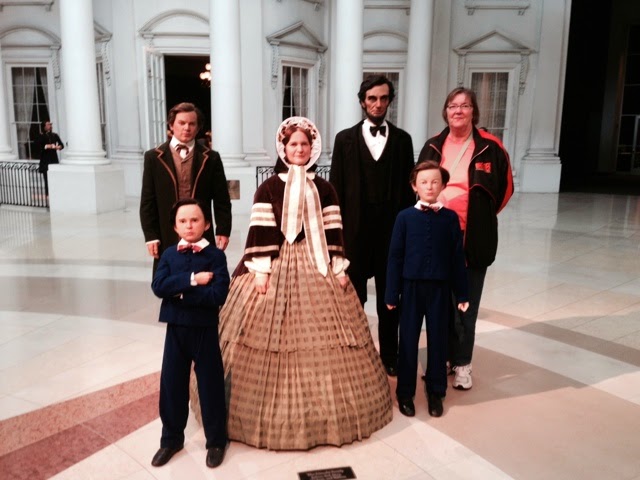 Lincoln is buried way under the Lincoln Memorial, only a few miles from his 1860’s home. 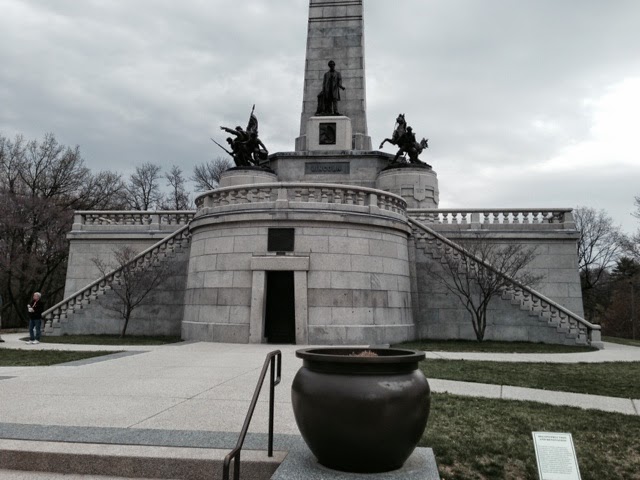 He was originally buried near here while the original monument was being build and then moved to a burial vaul inside. Some nasty folks tried to break in to the vault to steal him.  They were stopped. This, I think, is the origin of Illinois Dirty Politics whose triumph is Rod Blagojevich, an American convicted felon and true sleaze bag, may he rot in prison. When the monument began sinking because of a failure of the foundations, also a common problem for shoddy government work, thay had to dismantle it and put in about four times as much concrete in a new foundation to account for the substandard soils.  Then they reburied Lincon way below the burial vault with tons of concrete over him to prevent any more attenmpts at grave robbing and then reassembled the Monument.
After all,of that we had to have a bit of lunch. We tried The Front Burner right across the steet from the capital.  Yum.  A Bacon Lettuce Tomato Grilled Cheese. 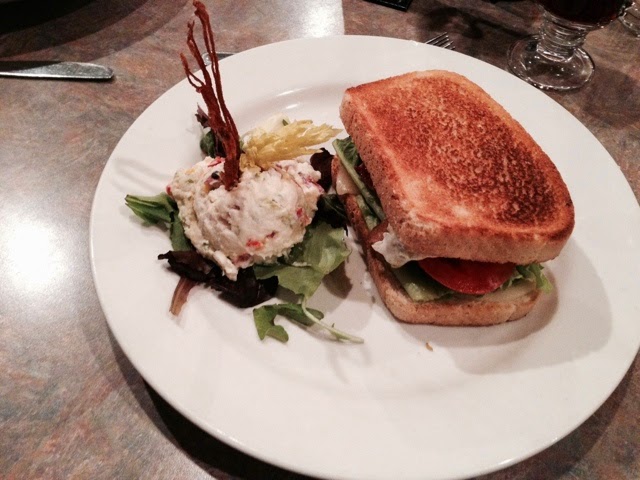 And some salmon and risotto. 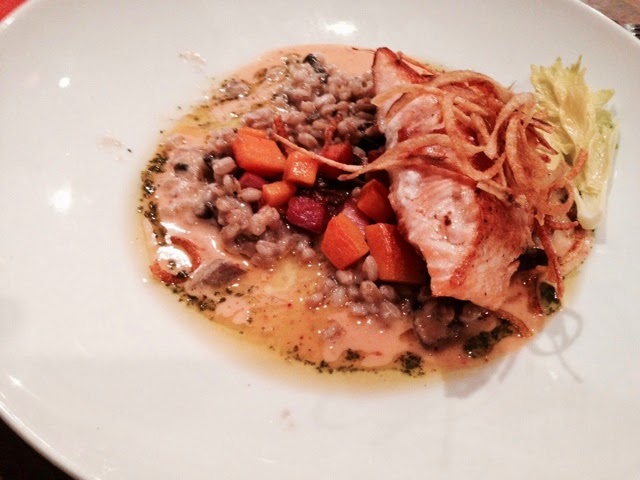 For less than $20!
And then on to a Frank Lloyd Wright home. 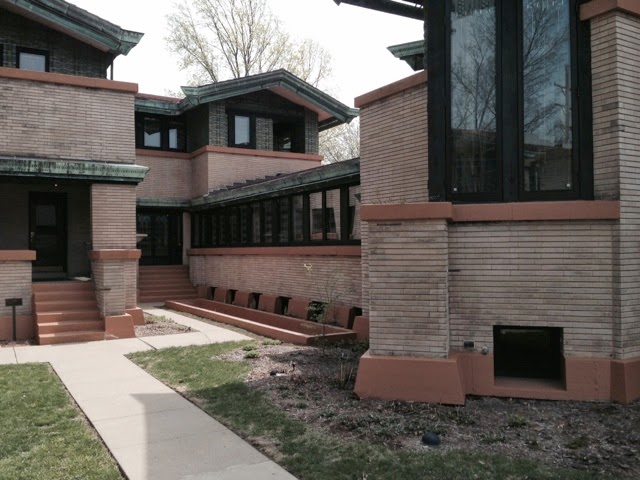 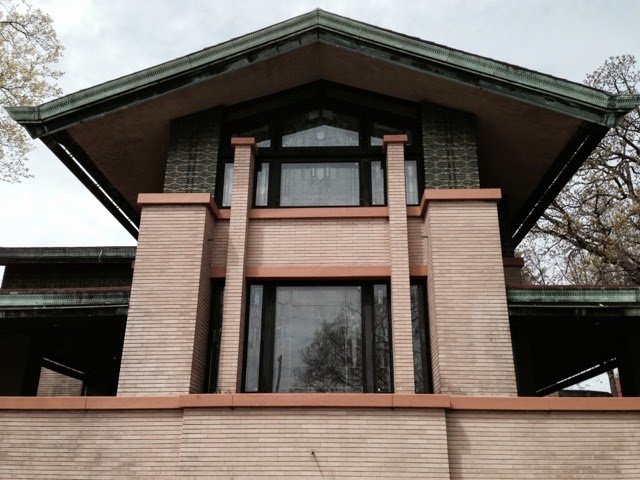 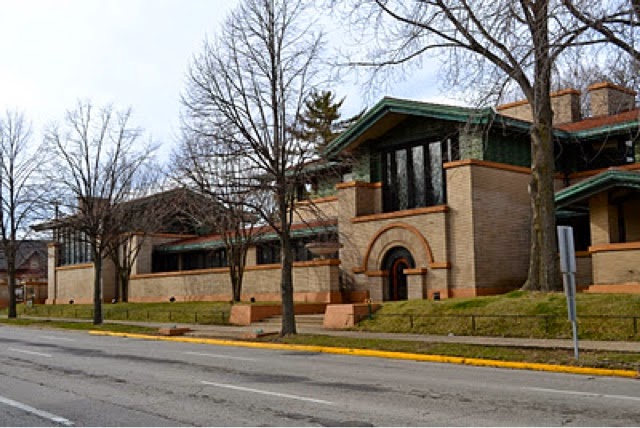 Wright considered this his most important home design. Even though it was early in his career this 16,000 sq ft house has more than 250 stained glass panels all desigpned by Wright. It was built for a woman who survived her father and husband with quite a fortune around 1900. After her death a business man bought the home and then many years later sold it to the State of Illinois as a historic site. Almost all of the original Wright designed furniture survived and is still in the home making it one of the most complete examples of his work. 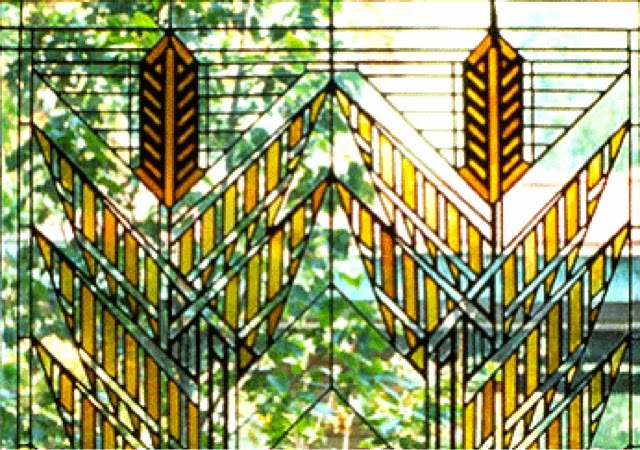 Sumac and butterflies were the dominant theme throughout the house. And entertaining was the most important function for Mrs Dana, an important art patron and socialite.
It was a very nice place to visit. 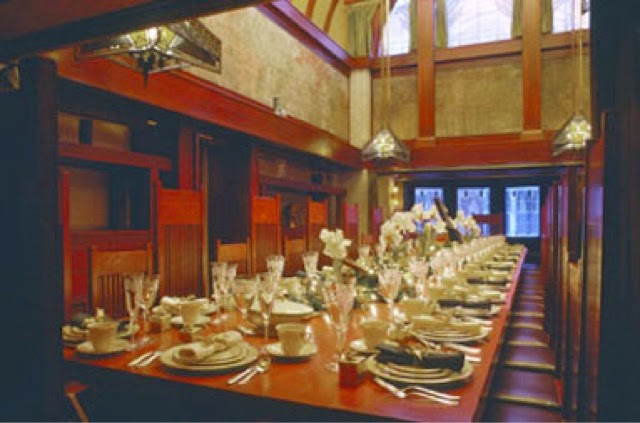 As we have traveled we realize that almost every place we go to has lots to offer, all you have to do is look and not be in too much of a hurry to explore. 34 years ago on our early travels all that was to be discovered had to be found by writing for information or looking for it when you get there. Today internet access from almost everywhere opens up everything to discovery.
Off to the Quad Cities. Moline, East Moline, Davenport and Bettendorf.
Roger and Susan