Skip to content
We skipped any travel in May and June to get stuff done at home and in the coach.  It was odd not going anywhere.
Stairway
We got the stairway railing done and installed and the stairway carpeted.  A significant accomplishment and a fair amount of work. It looks nice, the carpet is soft and makes the stairs quieter.
Coach
We are now almost 100% LED lights inside.  Not only did we replace all of the flourscent and halogen lights with LEDs we added more.  The new LEDs are at least 50% more lumens and use about 1/3 of the energy of the replaced bulbs.  The living room and bedroom LEDs are on dimmers. 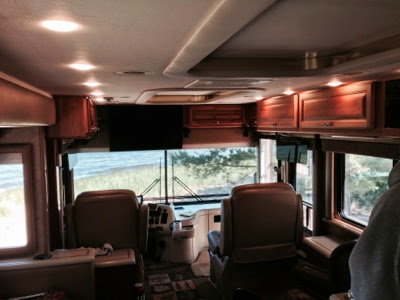 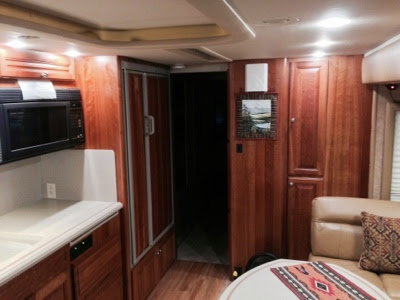 More light in the kitchen too. 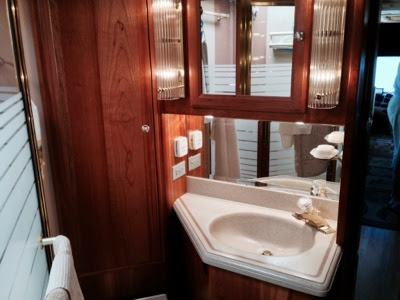 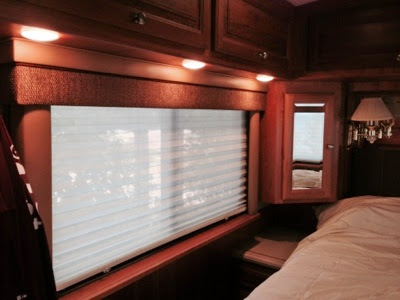 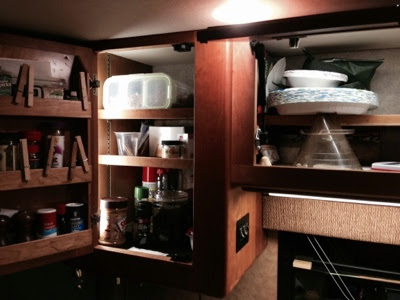 And lights in the cupboards. 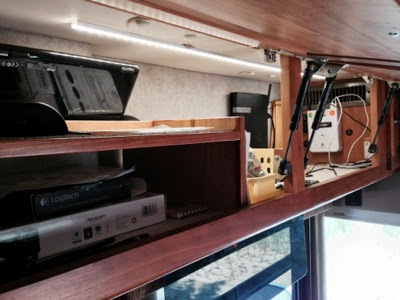 And we took out the front window shades and put in a motorized roll up/down sun shade and night shade.  Very nice.
And I am adding speed controls to the heater fans in the living room, put in a switch to turn off the dash blower motor when the heat comes on (quieter for watching TV), put in a new pair of USB charging ports in the dash, added a signal light to let me know when the brakes are activated on the Jeep while towing it, rewired the Jeep tow wiring harness and put in new connection sockets on both the Jeep and the coach, added a new map light next to the passengers seat and still more to do.  Whew!  Oh, and I replaced the two air pressure gauges in the dash.
I have magnetic proximity switches that I am adding so the interior cabinet lights will come on when the door is opened.  I am replacing lighting in the basement storage bays with LED lights.  And I have a couple more projects to finish before next winter.
Sounds like a lot but most of these got done in four or five days spread over few weeks.  Most of what is hard is deciding what to do and then finding the parts to make it happen.  Actually doing the work goes pretty fast.
And Susan came up with a real winner.  Where to put the paper towel roll?  No matter where it seems to be in the way.  So with a piece of silicon oven shelf liner (the black stuff) in a small space over the microwave to help the roll unwind easily and the paper towel fed under the edge of the door we have a great solution. 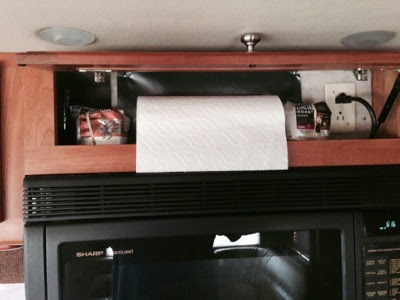 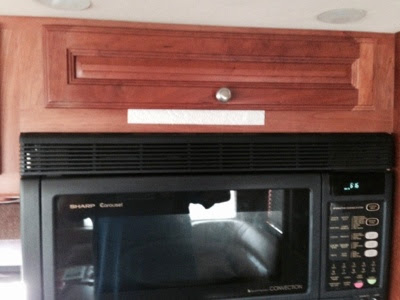 Hall of Fame idea.
So now that this pile of stuff is done we are off to the Upper Peninsula of Michigan.
More to come.
Roger and Susan