Skip to content
We were here once in the distant past, mid 70’s as I recall.  It is all a bit fuzzy, hazy, indistinct.  Nothing seemed familiar but then nothing is the same now as then.  For those of you that remember the 70’s or  are struggling to, you understand.
But we returned.  We stayed just outside of the Porcupine Mountains State Wilderness Park.  There is one “modern” campground which was pretty much full and three more drive in “primitive” camps mostly suitable for cars and tents.  There are many cabins that you can stay at, 1-4 mile hike in to each and dozens of back country campgrounds and camp sites accessible only by way of one of the 90 miles of backpacking trails.
A few miles away in the small village of Ontanogan there was a township sponsored campground right on the lake (Superior) with nice RV accomodations. 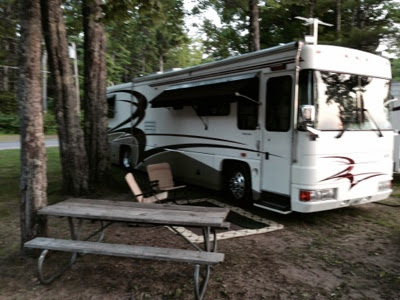 It was very nice looking out over the lake.  Eastern Time though which really goofed up our clocks.sunset at 10:30 PM!  But we were at the beach.  There is a lot of long sand beaches on the south shore of Lake Superior. 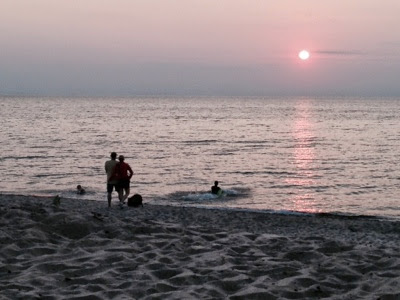 We were hoping to escape the heat and humidity but no.  It was upper 80’s both temp and humidity our first day there.  Oh well.  Of to explore the Porkies.  Visitor’s Center first where we learned a bit about the geology, the history and the lore of the Porkies.  Susan’s early relatives came from England to work in the copper mines of the UP so there is a lot to take in.  Then on to check out the Union Bay Modern Campground.  It is OK but not right on the lake, pretty close together and almost all of the sites were in the open with full sun all day.  The Township campground was pretty basic but on the lake and in the shade.  It worked for us.
We drove up to the parking area near Lake of the Clouds and walked up the trail to the overlook.  There are large upthrust rock layers that form an escarpment between the Lake of the Clouds and Lake Superior to the North.  The escarpment cliffs were as amazing as the lake. 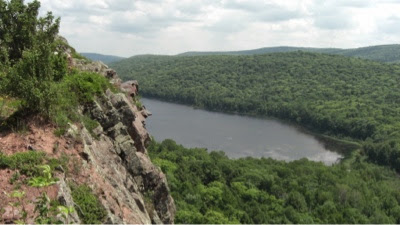 It was several hundred feet down to the lake.  Remember the heat and humidity?  Both going up!
Then we went to the trailhead for the Union Mine Interpretive Trail.  Loaded up with water and out hiking poles and off we went into the woods.  The tree cover gave us some shelter from the sun but not from the insect life.  This trail follows part of the Union River and some of the earliest exploratory digging and early mines in search of copper.  It is hard rock country and the work must have been backbreaking, all done by hand.  Once in a while they would blast something but not often as the hard rock was also prone to collapse.  This was all pre civil war.  They were big fellows.  Chack out the shovel. 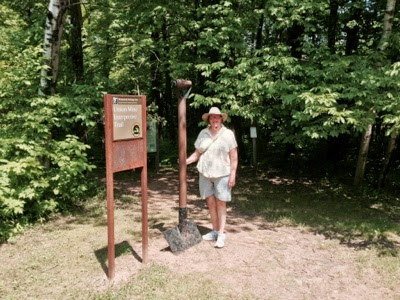 I thought this was a flower but it was a quarter sized mushroom, poisonous, I’m sure. 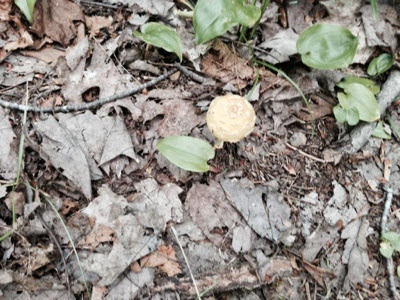 We saw several old mine shfts, mostly collapsed or filled in.  At one point on the trail there were eight shafts going down as much as 80 ft with four horizontal tunnels between them.  These were working, just barely making money, very dangerous places to be up until the mines finally cloased about 1900.
It was very hot and humid.  I mentioned that didn’t I.  We were soaking wet down to the skivies after that hike but went for one more.  When we got there and relized it was a half mile with a 300+ ft elevation increase we admired the picture on the infomation board of the view and went in search of ice cream.
We found some. It was good. And we didn’t have to walk far.
That night the wind and rain came howling across the lake with thunder, lightning stuff blowing every which way.  At least that is what it appeared to have happened in the morning.  We mostly slept through it.  The folks next to us had three tents set up.  They were all sitting in their cars and the tents were off in the woods.  They were not prepared and were gone by noon.  By then the sun was out, the temps much more Lake Superior like and the humidity had taken it’s own hike.
We headed for Ontonagon to discover what it had to offer.  The lady ar the visitor’s center was quite chatty.  She told us all about the town’s successes and demise as the mining, logging and paper industries surged and then waned.  Just next door was the local Historical Society.  These are place we seek out.  They are always interesting and the people are full of oral history and insight.  This one was no exception.  Susan found a newspaper article about a mining executive who retired and went to Duluth where he opened a hotel.  In that same hotel, Susan’s Uncle Jack lived to a ripe old age.
Then we went to where the old bridge used to be.  From there one could see the old lighthouse. 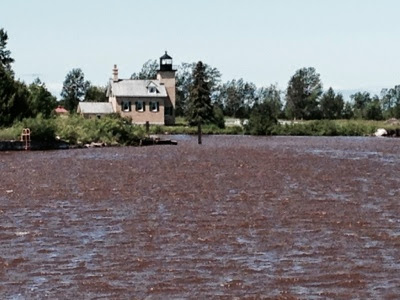 It guided ships into the mouth of the Ontanogan River.  There really is no harbor there.  There is a huge building right down on the lake where a company built some small ships for the Navy.  That business dried up and the building stands empty and unused.  Too bad.
Then we went to the Nonesuch Shop.  Edna had been there four fourteen years.  Most of the amazing 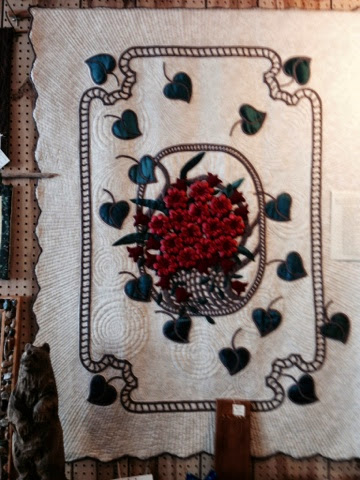 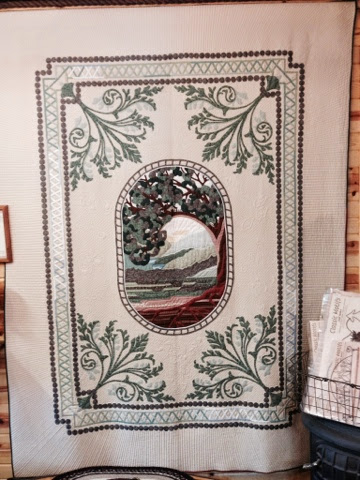 Edna’s quilts we beautiful.  We hung around chatting for maybe a half hour.  What an interesting person.

Up the street was a bakery selling pasties.  Since the UP is famous for them we had to get a couple to try out. The ones we make are better.
A quiet and cooler evening coming up and then East to the Pictured Rocks National Lakeshore.
More later.
Roger and Susan.