Skip to content
Munising
Another three hours or so East of Ontanogan lies Munising, Michigan.  It is the gateway to the Pictured Rocks National Lakeshore to the East and just off shore to the Grand Island National Recreation Area.  And as we found on our trusty travel tools a very nice Munising Tourist Campground with 80 sites.  It is located right on Lake Superior.  About 1/3 of the sites are right on the lake.  Ours put the Lake about 30 ft from our front window.  Put the chairs out there and enjoyed the beach and the warm afternoon sun. 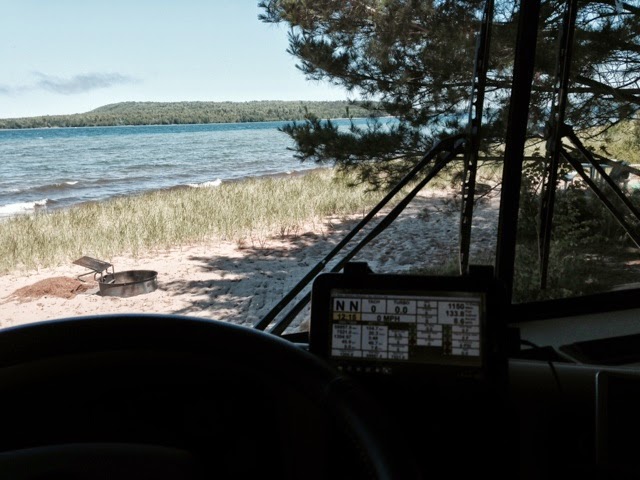 Grand Island
Grand island is off in the distance, a short pontoon boat ride away.  The island is about the size of Manhattan.  It is owned almost entirely by the National Forest Service.  There are a few lake side cottages still privately owned as long as their owners are still alive. You can take your bikes with and there are many miles of bike trails ranging from a 24 mile leisurely trail around the island to extreme mountain bike trails.  The island is crisscrossed with back country hiking trails as well with regular backpack campsites scattered all over or the opportunity to just camp where you find a likely spot.  This is a place you could spend just one or several days.  We didn’t even know it was here.  Next visit we will be going over on the pontoon ferry ($).
Pictured Rocks National Lakeshore
The PRNLS extends from Munising to Grand Marais, MI about 40 miles or more along the Lake (55 miles to drive).  It encompasses about 20 miles of enormous sandstone cliffs, most over 200 ft high, miles of sand beaches and about 10 miles of sand dunes that come right up out of the lake to a height of 300 ft or more!
Lots of ways to see the sights.  There are boat rides, kayak rentals, pontoon boat rentals and other adventure sort of things.  We chose the tour boat ride.  At the breakneck speed of 13 mph and a narrated 34 miles cruise we got to see a lot and start to understand why it was there.  The Western end of the PRNLS is all upthrust sandstone . The exposed face of the many layers of sandstone have been eroded by the lake since the last ice age.  There are sea caves, natural arches and other amazing features.  And since this is an ongoing process it is always changing.  Ground water seeps through the layers and water runs over the upper edges and then down the face of the cliffs.  Depending on what sort of dissolved minerals in the water the sandstone is stained different colors.  White is from calcium, greens from copper, reds and browns from iron and I don’r remember the rest. 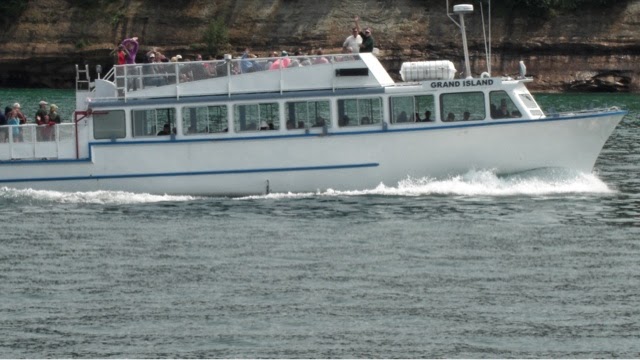 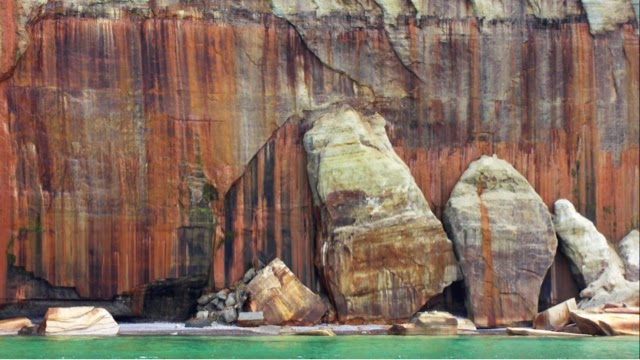 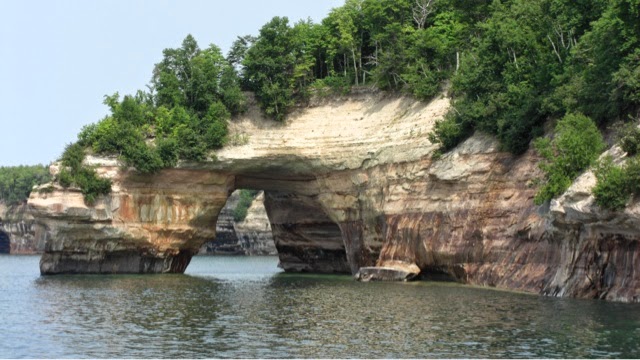 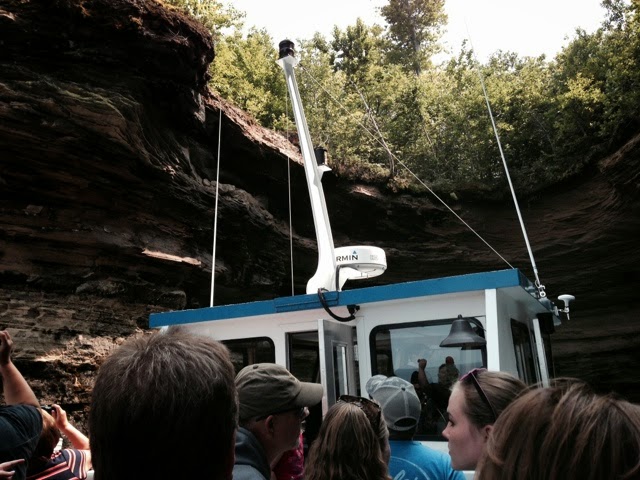 The boat snuck into a little cove where we were surrounded by rock cliffs.

Pretty amazing views.  All along the route there were kayakers  and pontoon boaters.  We went by water falls, big beaches where boaters were having picnics and hikers along the shore.  Just like the North Shore there is a lake side trail from Munising to Grand Marais, about 50 miles.
Grand Marais, MI
We drove up to Grand Marais, a small town at the other end of the PRNLS.  It is another example of a once thriving logging and fishing towns now down to a few hundred folks depnding on tourists. 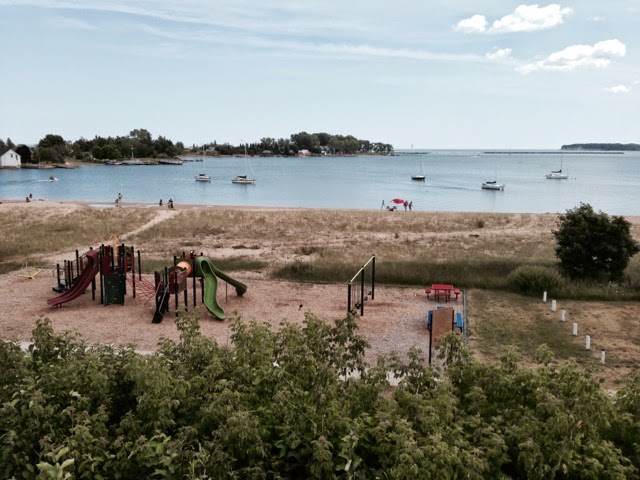 A nice, safe harbor beach and playground.  There was a bakery that had strawberry rhubarb pie.  One ended up in our Jeep.
There is another campground in Grand Marais that we checked out.  It was close quarters with lots of trees and obstacles.  Probably not a good place for us.
Grand Sable Dunes
On the way back we stopped at the Grand Sable Sand dunes.  These are the renmants of the glaciers pushing up sand and gravel at this end of the PRNLS.  Huge sand dunes going right down into Lake Superior.  The wind continues to blow sand up the face and over the top of the dunes cusing them to grow higher and further back from the lake. 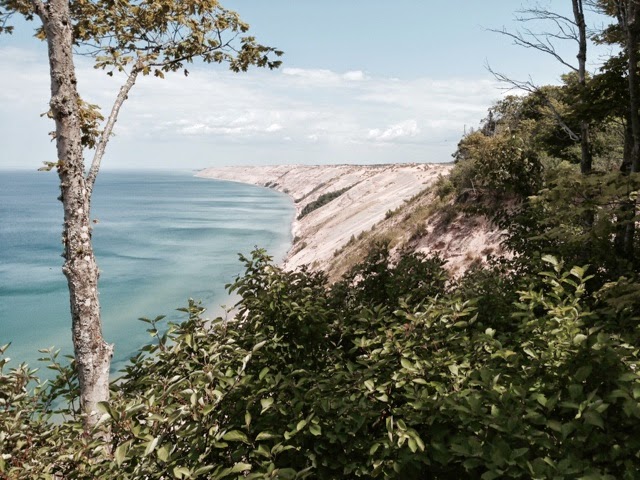 The dunes are more than 300 ft high and the distance along the face of the dune from the top to the lake is more than 500 ft.  This is the site of a log slide from the early 1900s just to the right of where were standing.  The logs slid down a wooden ramp to the lake below to be tied together in huge rafts and floated to the nearby mills.  The signs at the top of the dune said that it would take only a few minutes to get to the lake but at least an hour to climb back up through the sand to the top.  Lots of warnings about not trying it if you had health issues.  We looked.  Nope.  On to our next adventure.
The Lost and The Found
On the way back to Munising we took a side road, off road to be exact for four wheel drive only as the map said, to an overlook.  The road was just bumpy, not much of a challenge.  At the end was an overlook of an inlnd lake.  There we found about 20 weary looking young teens and a couple of camp counselors who had been on a four day backpack trip and were waiting for their bus (on this road?) which was several hours overdue.  No cell phone service here so we took their info and a contact phone number.  We drove out and down the road to a small store where we could maybe make a call. And there was the bus and a bus driver who had no idea where he was supposed to pick up his YMCA camp hikers.  We showed him on the map where they were and saved the day.
Miner’s Falls

On we went to another hike, a mile and a half, to Miner’s Falls.  Easy in, all down hill. 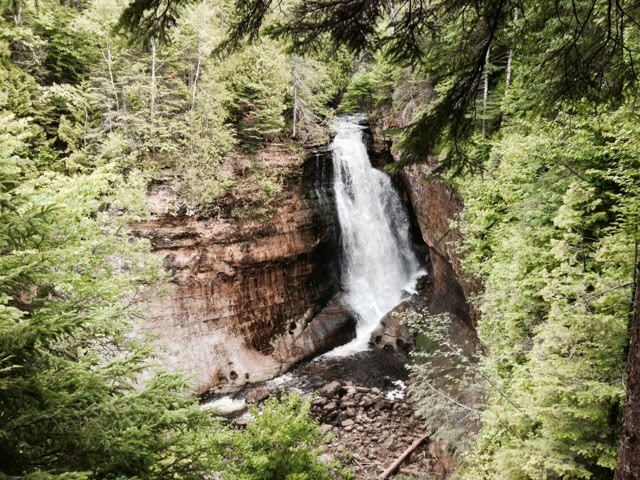 That means the return was all up hill. Oh well.  There are many falls in the area, this was one of the nicer ones.
New Friends
When we got settled in the Munising Tourist Campground we went for a walk around the campground as we do in most places. It is just for some moving around after driving but also to see what it looks like, what the campsites are like and what other camping setups we see.  Lots of tent trailers, tents, conventional travel trailers, many fifth wheel trailers, motorhomes and motor coaches.
On this walk we happened on a classic Foretravel, the same brand that we have. 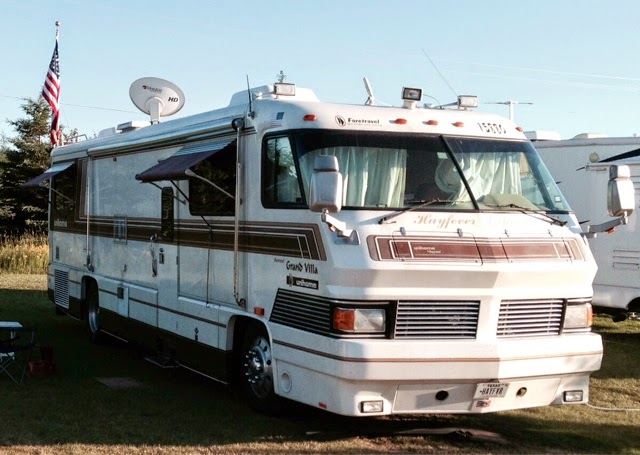 No one was home. The Motorcade number on the front of the coach and the “Hayfever  Express” name on the front gave me some clues.  It took me about 10 minutes for find out whose coach it was, where they were from and how to get in touch.  Don and Trudy from Texas called a while later.  We swapped cookies and stories one evening at thier coach, a 1992 36ft GranVilla.  It was in great shape. Don and Trudy travel several months a year since they retired about 8 years ago.  They have been to the Maritimes in Canada and to Alaska in their coach.  Tough, capable, durable.  That describes a Foretravel pretty well.  The next evening they stopped by to our coach and we shared the pie we found.  What nice folks to run into in such an unexpected way.
Off next toward Delta, Wi.  Why Delta?  It is the home of the Delta Diner.  And then on to Duluth and then home. Don’t pass it up!
More later.
Roger and Susan