Skip to content
Time to go
Our original departure window was January 7-9.  An unexpected turn of events made it important that we be in Portland, OR on January 10.  So we moved our departure window up to January 4-5 and with help from very gracious friends in the Houston area we were able to find a place to park the coach for four nights, plugged in and in a secure area while we hopped a jet to Portland.
Kansas City, MO
Turns out that was probably a good thing.  Sunday morning the 4th was below zero when we got up. We were gone in an hour and a half heading south towards Kansas City, MO. 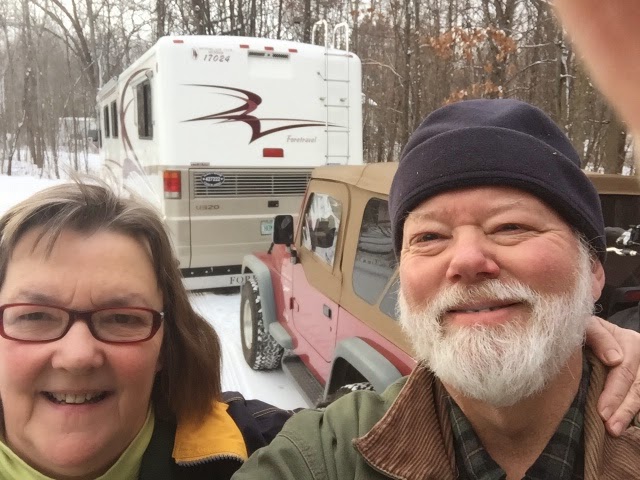 Best buds, ready to go.
The drive was uneventful, cold but clear skies, windy, some blowing snow but no drifting or packed snow on the roadway. 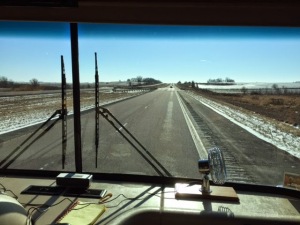 Southbound from (in) the living room.
We made a pair of movable fans to help with first-thing-in-the-morning window frost.  They work quickly.  And in the summer will keep us cool.  We take turns driving, 100 miles or a couple hours seems good. 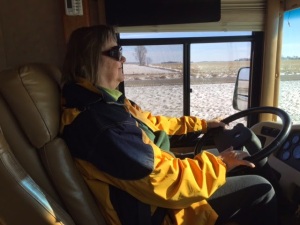 The other driver.
It really helps. We stopped just as the sun was setting on the outskirts of KC at Camp Walmart.  We went in for a few store laps, got some milk and back to the coach in time to see Downton Abbey. We are not entirely hooked on it but sort of want to see what happens.  The historical context is interesting.
Dennison, TX
The next morning was much warmer than the prior morning but still in the 20’s.  We were quite comfy and warm.  Got up fairly early, had some coffee and breakfast, did our normal preflight checks, oil level, coolant level, tire pressures, lights, that sort of thing and were ready to go. Southbound towards Joplin.  Susan drove through Joplin and then west towards Oklahoma.  She pulled into a truck stop, into the big boy fuel lanes and we added 50 gallons of diesel. I think that was her first time doing that. No problem.  So the further south we went the warmer it got.  40°, 50° then 60°.  Nice.  We were going to stop in Atoka, TX at a Camp Walmart but it was a small Walmart and not easy to get in to so we went another 50 miles to a much bigger Walmart in Dennison TX about 50 miles north of Dallas.
Camp Walmarts are ok, there is a store nearby, but often there are trucks and other stuff that makes noise.  This one had us sandwiched between semi’s that all seemed to leave about 5 AM.
We got up and got going about 9 hoping to miss most of the Dallas traffic heading for an Army Corps of Engineering campground on a reservoir near Ennis, TX a short 120 mile drive.  We went right through downtown Dallas looking left and right for the Ewings.  Never saw them but there was construction, narrow lanes and lots of traffic.we perservered and made it to the COE campground in time for lunch.  50 amp hookups, water, quiet and almost deserted. $8/night.  60’s.  Shorts! Perfect. 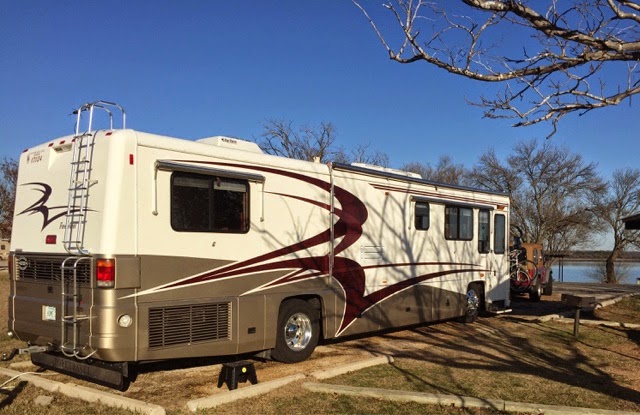 Cleanish
We drained out all of the water lines and tanks, flushed everything out, flushed it again and then added about 40 gallons of water.  Then we hooked up the hose and washed the road grime off the coach and Jeep.  Not a perfect job but we got off the salt spray and rinsed out the wheel wells.  Perfect enough.  Actually looked pretty good. All of those chores took about three hours.  Then we walked for an hour or more around the campground, a nearby picnic area and a marina.  We made pizza for dinner, watched NCIS, read for a while and went to bed.
Houston
It was about a four hour drive to the east side of Houston where we had a place to park the coach.  Another fuel stop to fill up, the price is going down as we head south. There was a lot of construction heading into Houston.  They just cram four lanes into three and have at it.  But no problem, right towards downtown Houston, around on I610 and the east in I10 to the far side of Baytown.  Houston is huge!
We parked at Ralph’s place on a lake with full hookups available. They were very accommodating and gracious hosts. 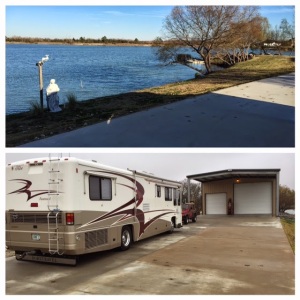 Views from Ralph’s.  Before we left for Portland and the morning after we got back.  There is a 45ft coach in Ralph’s barn and a lot more.
So this is the first leg of our travels to elsewhere.
More to come.
Roger and Susan