My sister and her huband, Bruce, live in Portland, OR.  The both went to a small college just west of Portland and have spent almost their entire married lives there.  They had two wonderful children, Eric and Sarah.

Sarah died in a mountain backpacking accident 10 years ago at age 28.  She was deeply loved and dearly missed by so many people. Sadly, Eric died on December 6 at age 41. He had a very bad infection that settled in his heart. It also caused problems in his lungs and kidneys and worse, a severe stroke that did much damage.  After 8 days in a coma in ICU his heart failed and Eric died. Judy and Bruce and Eric’s wife, Cyndi, and their two kids, Victoria and Hunter were there with him.
Eric always had a smile, a wise crack or two and a practical joke ready to go. He loved his family and his job at the Oregon Zoo where he was a Public Safety Officer.  He started at the Zoo when he was 19.
He loved playing games, any games and was a seriously great Scrabble player.  I though I was pretty good and he would just wail on me. We will all miss him.
His memorial service was held at the Zoo. They set up the Ballroom for 350 and when the service started the seats were filled and a great many were standing. There were some great stories about Eric from the Zoo Director, from long time friends of Eric’s, from Judy and from Bruce.  A bag piper concluded the service in a traditional tribute to a departed Public Safety Officer.
Both Eric and Sarah were respected and loved.  They made a big difference in the lives of people they met every day. Their lives are are testament to the basic values and qualities learned from Judy and Bruce that they each built on in their own ways for themselves. They are not here with is anymore but will never be far away in our memories and hearts. Rejoicing in those memories reinforces them and helps Sarah and Eric live on.
Most of Bruce’s family is from northern California and a great many were there, way too many to remember names and faces after a single pass but there were many more opportunities.  The evening before the service about 25 showed up at Judy and Bruces for a casual supper.  After the service there were about 40 at friends Kimi and Andy’s house for a soup supper.  We were all there after Sarah’s service too. And then the next morning 30 showed up at a nearby restaurant for breakfast before everyone went one way or another. 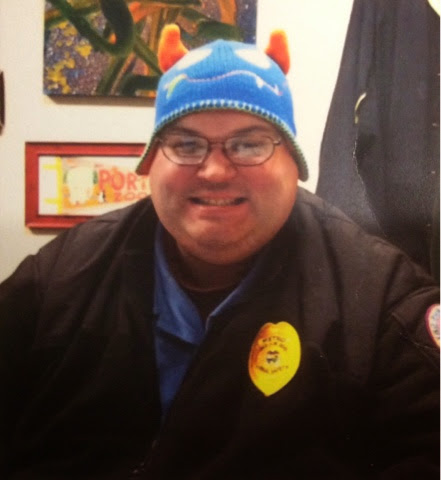 “The cutest little devil you will ever see.”

So we got to Houston, had our coach graciously kept safe by Ralph who answered the call from our friend Rudy, drove to the airport, flew to Portland, see above, flew to Houston, got to bed at 2:30AM and then drove to Nacogdoches, TX, stayed overnight at the Foretravel factory campground and are now at Xtreme Paint and Graphics for some repair work and some safety and beauty upgrades. While here we will stay in the coach a few nights and then into their free-of-charge apartment until the work is done.
We have found the Chilis restaurnt, the library, several walking trails, the grocery store and more. We have already run into folks we know or will know soon.  Lunches and dinners are being scheduled. The Foretravel family is an active and friendly bunch.
That’s where we have been for the past few days. I am really glad we went to support my sister Judy.  We are each the only family we have left.  I needed to be there.  She needed me to be there.
More later as the adventure continues.  Pictures too of the transformation at Xtreme.
Roger and Susan