Phoenix is in Maricopa County.  The county has several regional parks, four have campgrounds.

McDowell Mountain Regional Park is NE of Phoenix about 6 miles past Fountain Hills and has more than 22,000 acres of desert and mountain terrain to play in.  The campground is in a basin at about 2,000 ft elevation surrounded by mountains.  There was one day when we got some showers, a few days with big clouds rolling by and rain in the distance but mostly it was blue sky. 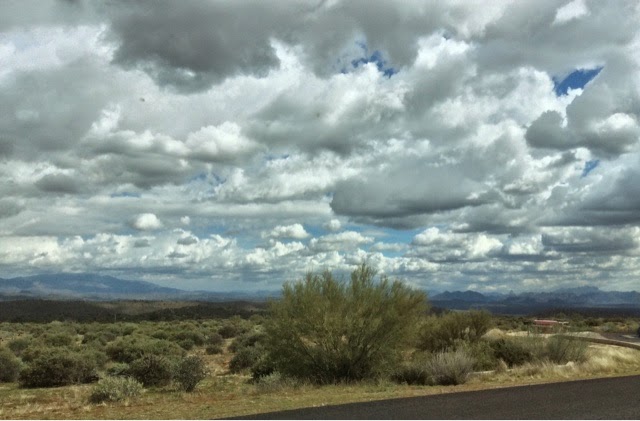 We had a really nice campsite looking out on Superstition Mountain. 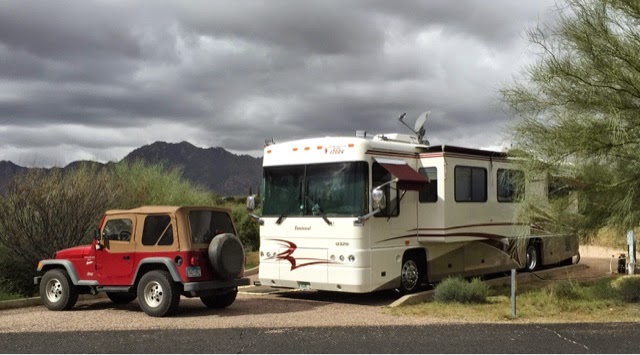 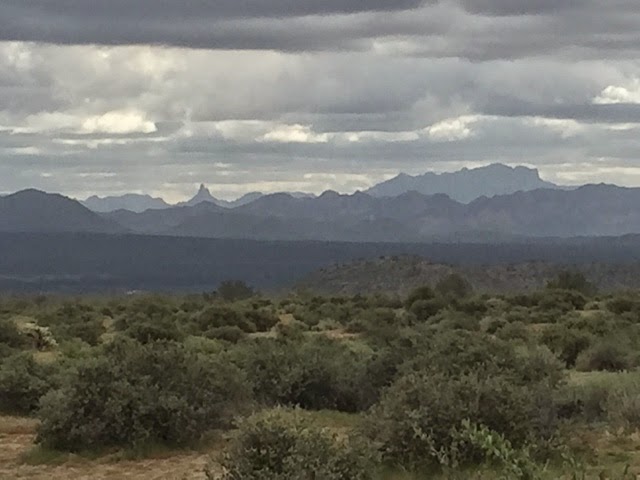 That is Weaver’s Needle to the left and Superstition Mountain on the right with the sharp vertical face. The park has many miles of hiking trails, most can also be used with bikes.  Lots of fun riding through the desert on your bike.
Susan’s brother Frank and his wife Pattie have a home in Rio Verde about four miles further out from McDowell Mountain Park where they spend much of the winter.  So we got to go over their house, check out the neighborhood and go to dinner with them one day at the golf clubhouse.  Rio Verde is a senior community of nice homes around golf courses. There are no stores, no schools, no gas stations.  Everything they need is in Fountain Hills.  It is called Fountain Hills because they have a pond with a giant fountain in it that goes off once an hour.  We could see it from our camp site.  Somebody said it shoots higher than the Eiffel Tower. 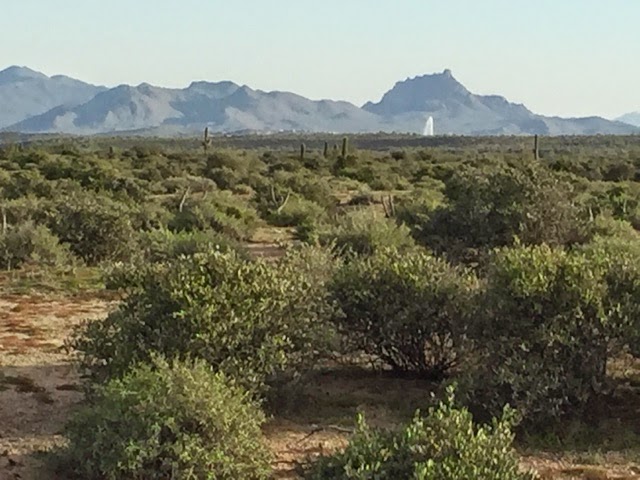 We went off hiking in the desert with them one day to a recently discovered landslide that happened thousnds of years ago, probably before any humans were in this area.  The landslide was at least half of a granite mountain that slid down making a rubble field more than a mile long, nearly a half mile wide and several hundred feet thick.  After so much time had passed it looked pretty much like everything else until some geology student stubled on it and a light bulb went off. 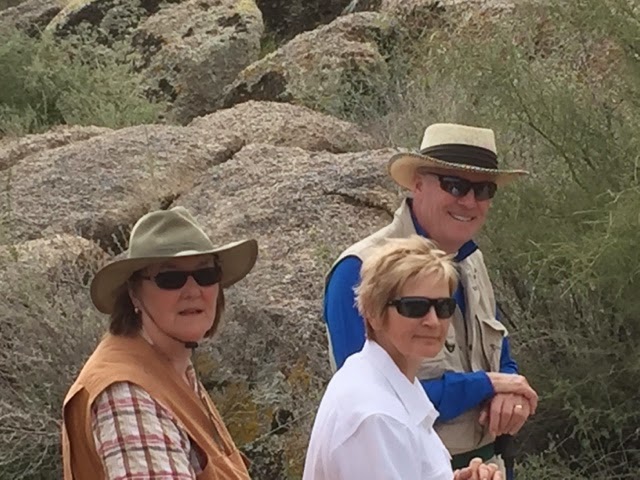 Sort of that Blues Brothers look.  The trail was just shy of two miles each way and plenty of up and down.  There were plants starting to bloom. 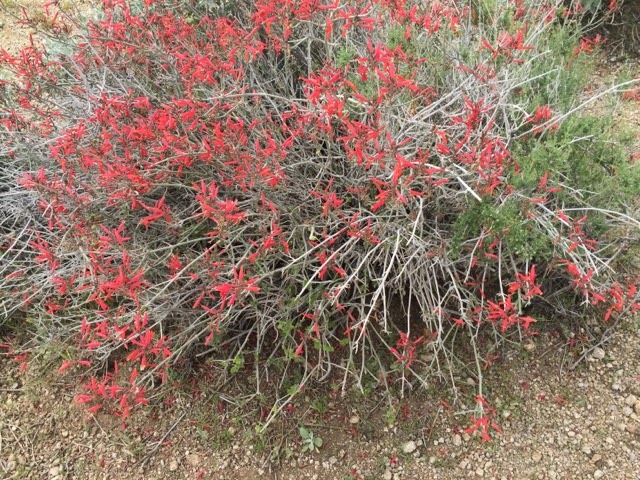 We came across a Gila Monster, a poisonous slow moving lizard.  This one was about 16″ lpng. 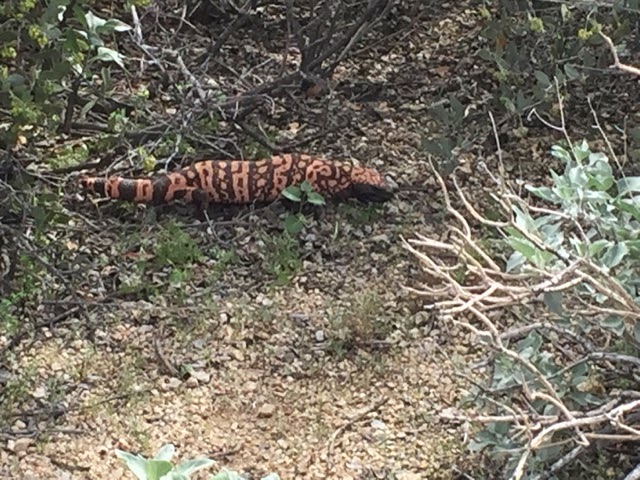 It is a good thing they aren’t too fast.  These are very slow metabolism desert dwellers.  They eat about three meals a year, each up to 1/2 their body weight.  The saliva of the Gila Monster has been found to be effective in helping to control type 2 diabetes.  The enzymes that make this happen have been isolated and are being synthesized to make drugs.
After our grueling hike 😉 we headed off to the Greasewood Flats Bar.  It is a cross between biker bar, cowbow bar, tourist destination and outdoor one man band venue. 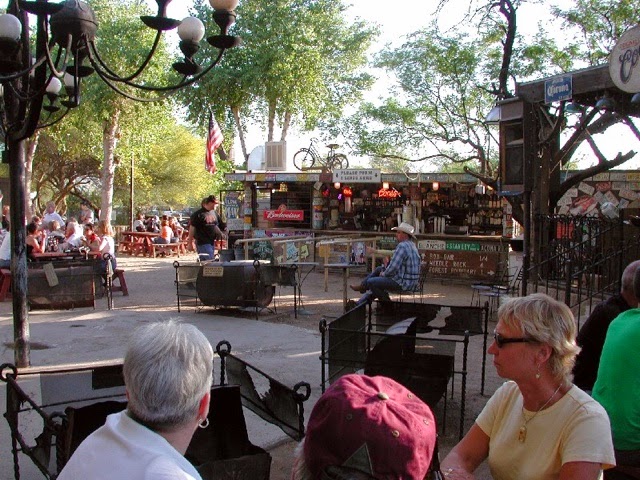 You go into a building with money stapled to every surface to order, pay and get a number.  Some time later when your number is up (that sounds wrong) you go in another building and get your food.  It was pretty tastey. 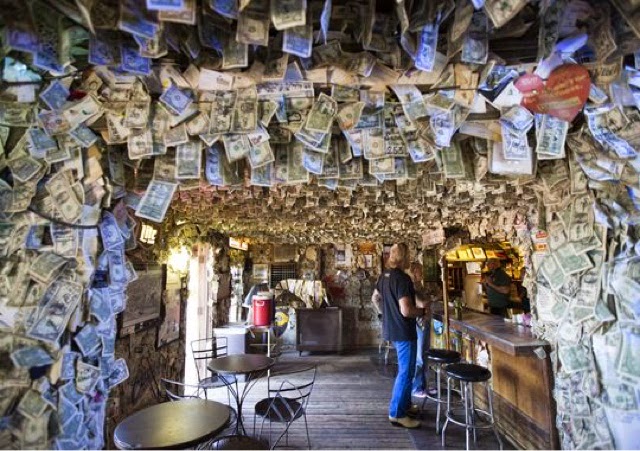 This place has been there forever but this spring is it’s final days.  The wrecking ball of progress is approaching to tear everything down to make way for lots more expensive homes.
Water is very scarce in this area.  Virtually no one has lawns, just desert gardens.  Scottsdale is a well to do suburb.  On the news the other night they reported that there were several thousand homes in Scottsdale with monthly water bills over $500. That seems like a lot to me, homes and money.
It was nice to see Frank and Pattie.  They have been after us to visit for several years and we finally made it.
My sister Judy and brother-in-law Bruce are coming to visit us on Wednesday the 25th.  Actually they are in Phoenix for a Lymphoma Conference on the 27th. So we get to see them for a day in Phoenix and then for another day up in Prescott.
More later.
Roger and Susan