A short way north of the Diamond J Campground through the Tucson Mountain Park is the western section of the Saguaro National Park.  We stopped there a couple days earlier to get maps and hiking suggestions. We had two places in mind, both off a 4WD unimproved road.  The first was an old mine trail that led up into the higher ground.  This trail then connected to a long cross country trail that followed the ridges by way of a long series of switchbacks.  We went as far as the switchbacks where the trail got significantly steeper and the sun was hot.
The saguaro are everywhere.  It is like a forest of them, I imagine they are as close together as the environment will support, maybe every 30-40 ft.  Pretty surprising in an arid landscape of sand, gravel and rock.  Something seems to be growing everyhere in between as well.  It may look bleak but a closer look and the desert is a vibrant growing community. 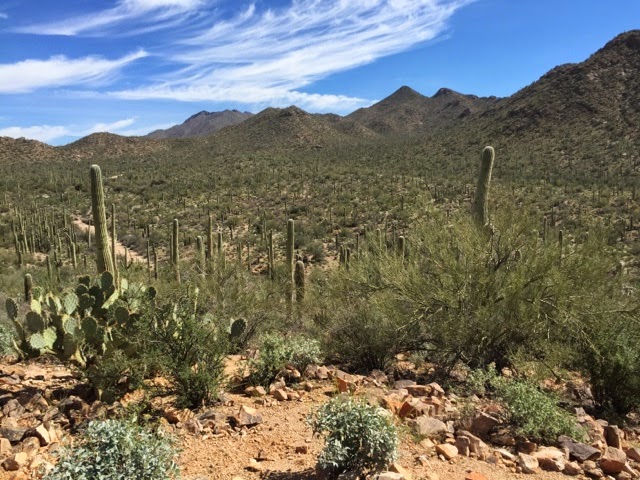 Wa have spent a lot of time in the desert and have come to appreciate what it offers.  Coming from Minnesota it seems so stark but it is actually quite nice.
The saguaro can live for 150 years, get as tall as 70 ft although the largest one known today is about 45 ft, and more than 3 ft in diameter. They may or may not grow arms and many grow arms on arms.  Arms start to grow when the saguaro is about 75 years old.  More ends means more flowers which means more seeds which is how the saguaro propogate. 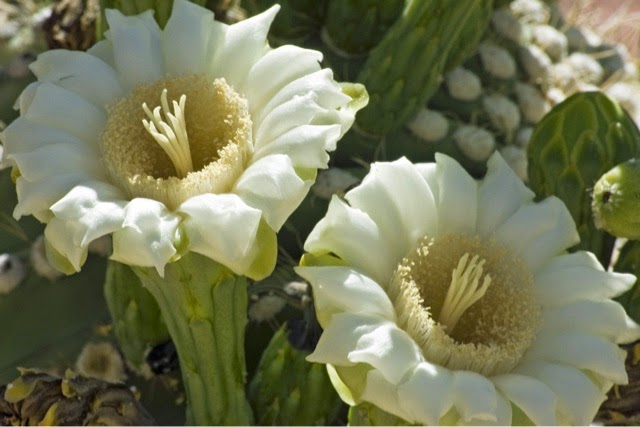 White flowers on the ends ot the arms and a red fruit below. Desert blooms are incredible.
When it rains the saguaro sucks up as much water as possible and stores it in the green fleshy outer layer which is protected by sharp, stiff spines. The saguaro swell up as they absorb water.  The pleated outside layer makes that easier. 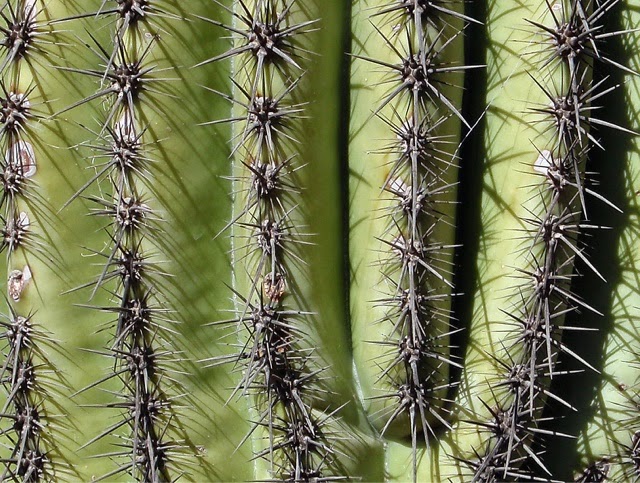 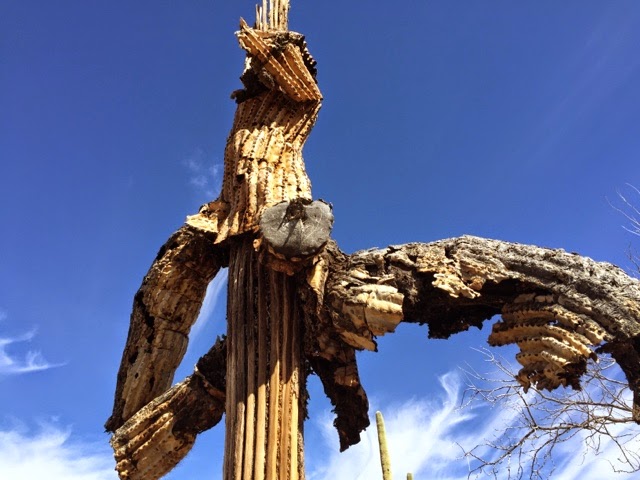 This one is dead and you can see the core where the fleshy outer layer has come off. 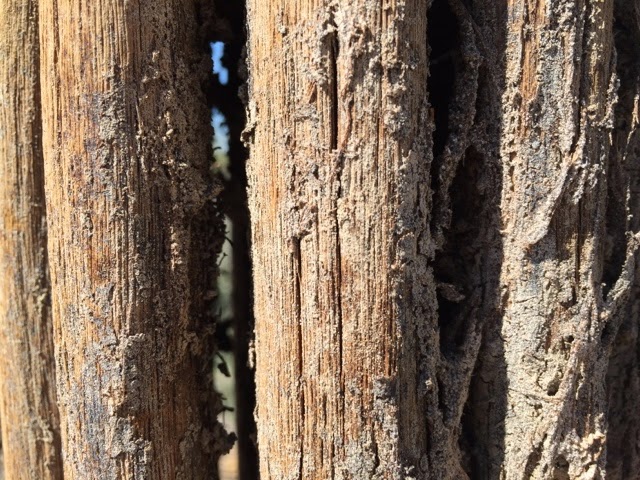 The cores are all interconnected but there is space between them.  The dead saguaro are collected and the wooden poles that make up the core are used for poles in roof structures and fences and just about everything that could use something like these.

The saguaro also provide nesting sites for a dozen or more species of birds.  Two bird species will peck a hole through the outer layer and make a nest.  When they are done the other species move in. Some saguaro had a dozen holes in them. 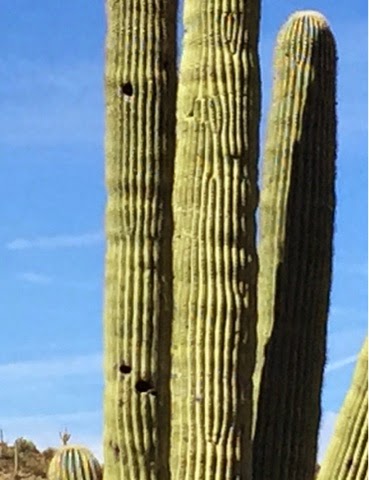 Probably more than you ever wanted to know about saguaro, right?   Learning about the plants and animals and the geology and natural history of the desert makes it just that much more interesting to us.
Our other destination was Signal Hill.  It is at the end of a half mile triail that was built by the CCC back in the 1930’s.  They want you to stay on the trail so they put up signs. 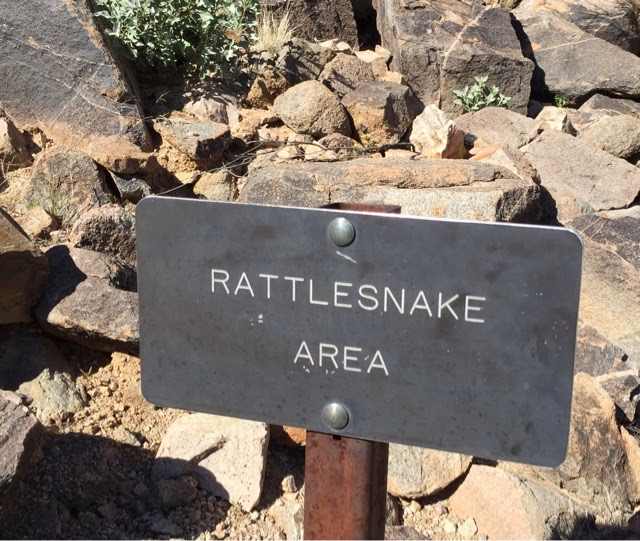 We didn’t see any which was OK but there are much smaller and even more dangerous scorpions out here.  Didn’t see any of those either except in displays at the visitor’s center.

Signal Hill is a high hill that can be seen for a long way.  They probably built signal fires on it at one time.  The main attraction today is to see the petroglyphs left by the Hohokam people, who inhabited this area from 500 to 1100 A.D.   The blue sky is pretty blue as well. 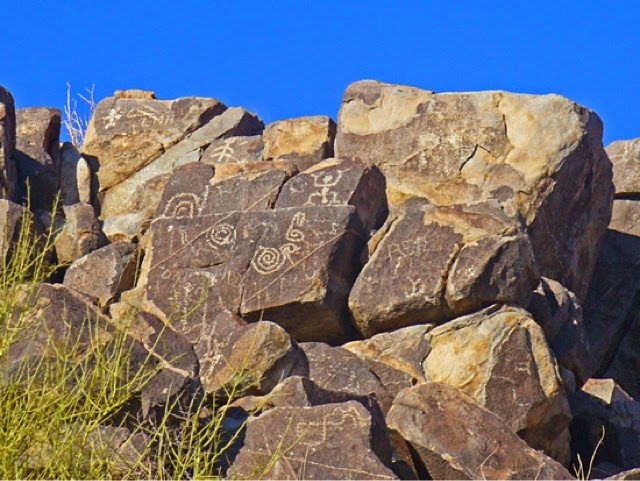 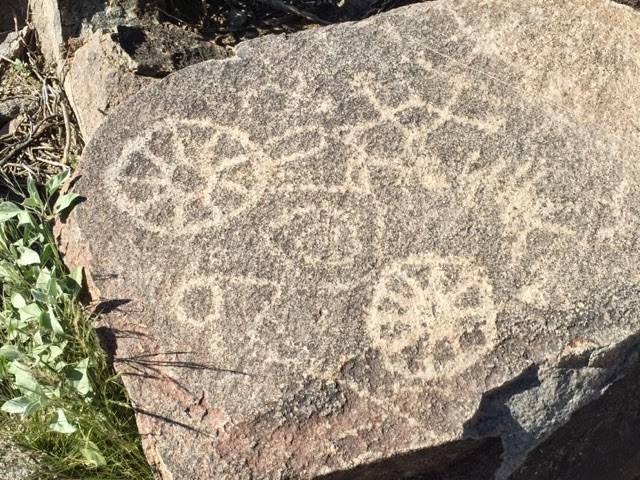 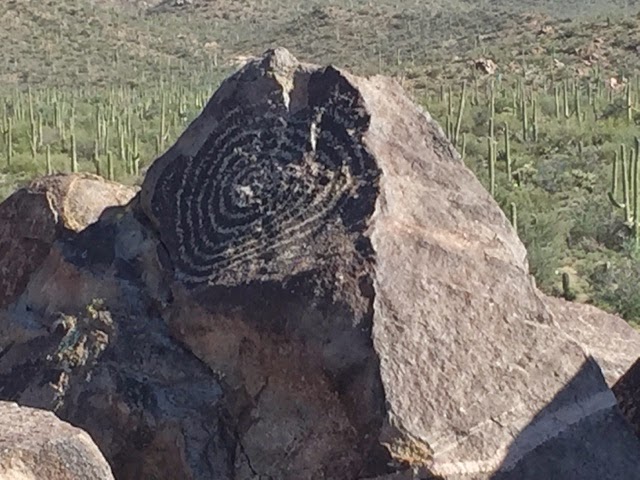 These were scratched into the rock surface. It is really amazing that they survived this long and have not been vandalized
The signs at the top of Signal Hill said that no one is sure why they are here or what they mean or what their significance is.  They were just interesting and reading about the people who were here long ago is good enough for us. The climate here was much milder and wetter than it is now.  Most of the early people of AZ and NM were here in the same time frame. Most left in the 1100-1400 time frame most likely due to climate change and competition for food and water.
We have been in the Tucson area for almost a week.  We have met some wonderful Foretravelers. We have been here just enough to sample a few things.  This seems like an area where we could come back and spend much more time.
Off to NE of Phoenix to McDowell Mountain Regional Park in the next day or two.
More later.
Roger and Susan.