Davis-Monthan Airforce Base is located in the city limits of Tucson.  Of course out west city limits seem to extend 30 or 40 miles outside of what one would consider the end of town. Probably has to do with water.

It is desert here, higher altitude, about 2000 ft, dry, sunny, pleasant in the winter, really hot in the summer.  And the soil here is hard.  There is a name for it but it is just hard.  Hard enough that they can move aircraft around without any pavement and when it rains, the aircraft don’t sink.
Davis-Monthan Airforce Base is the home of the Airforce’s 355th Fighter Wing which flies A-10 Warthogs. It is also their primary pilot traing center for this aircraft.  The A-10 is a close ground support fighter plane.  It carries missles, bombs and it’s claim to fame, a 7 barrel Gattling gun like cannon which can fire 4,500 1-1/4″ depleted uranium cannon shells per minute.  They are particularly effective at blowing up tanks and they have earned the nickname Tank Busters. 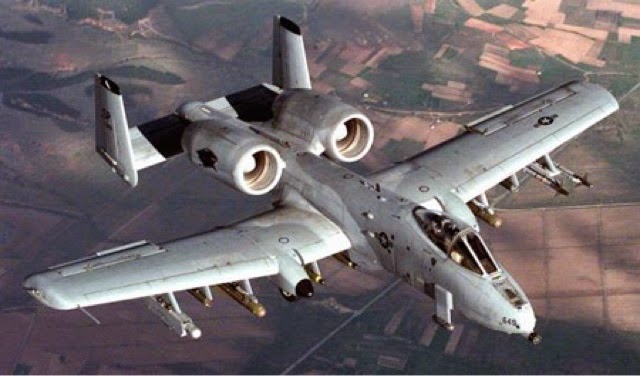 They are very tough aircrft and are a welcome sight to troops when they need one.
The other function at the D-M Airforce Base is the 309th Aerospace Maintenance and Regeneragtion Group (AMARG) usually called the Boneyard. This is the primary storage, rehab, reclamation and disposal facitlity for all of the US Armed Services as well as many foreign counties.  This is where that hard dirt comes into play.  There are about 3,800 aircraft of every type here.  They have four storage classes from Ready-to-Fly on very short notice, to Ready-to-Fly in a month or so, to never going to fly again but good for parts and no useful parts left, waiting for disposal.
The first two types are prepared for storage and all openings are covered with a spray on latex mask to keep out sun, water, dust, bugs and everything else.  The very short notice ready to fly means a matter of days.  Storage fluids are flushed and refilled with whatever needs to be there, electronics are energized and tested, the covers are removed and the planes are tested and certified for flight.
There are only three Airforce officers that work there.  Everyone of the 550 other folks are civilian contractors.  Orders come from all over for this part or another and if they aren’t already in inventory they go out and take one off a waiting airplane, crate it up and ahip it out.  When the planes are ready for disposal they are sold as scrap at auction.  Then the airplanes are cut up and run through a shredder and pieces not bigger than a dollar bill are loaded into containers for the scrap buyer to haul away.  When they are done there is nothing left.  More planes fly in.
For every dollar of expenditure that all of this operation costs, the US government gets $11 in revenue back.  But of course we paid hundreds of billions of dollars for the aircraft sittimg there when they were new.
To see the boneyard you have to go to the Pima Air Museum and buy a ticket for the Boneyard Bus Tour.  The Pima Air Museum has one or more of just about every aircraft used by the US after WWII and many from WWII.  The WWII aircraft are stored inside. Most of the post WWII aircrafts are outside, there are hundreds of them.  A tram tour lasting about 75 minutes takes you around to see most of them. And then you can walk back to see them close up. 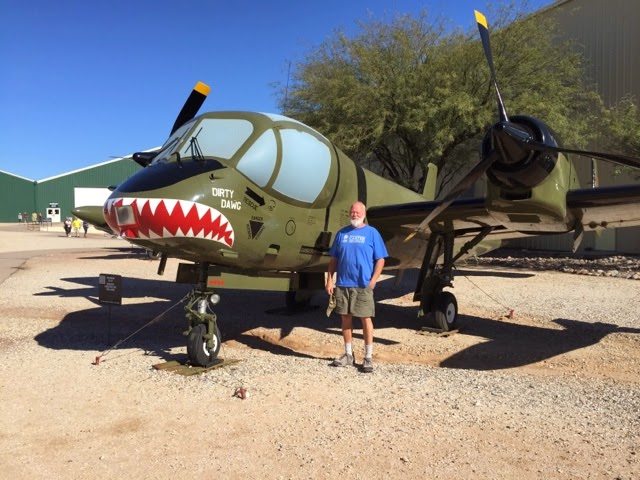 This Army observation plane is a Grumman OV-1C Mohawk used from 1953-1996.  I liked the way it looked, big bug eye windows.  It was probably expensive to fly and maintain but it would make quite a statement as a privately owned plane.  I have never seen one at Oshkosh.
This is another plane we don’t see very often. Out of the clear blue of the western sky comes Sky King in his Cessna Bobcat.  Some of you might remember this was the plane flown by Sky King and Penny in the first 40 of that shows 72 episodes. These were also known as the Bamboo Bomber.  Probably because they were made with wooden framing.  Sky King’s plane was retired when wood rot was discovered. 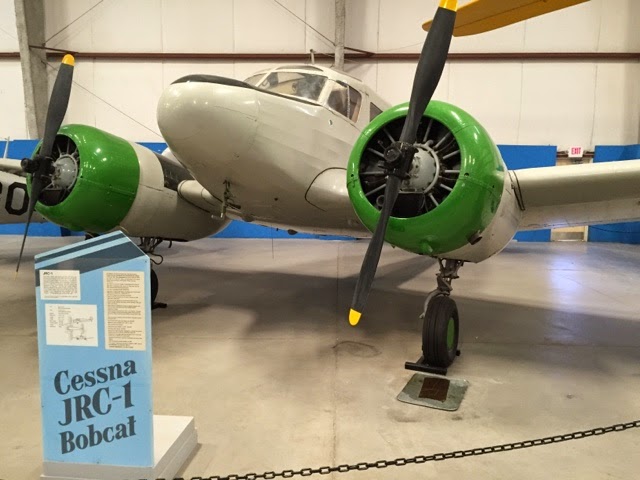 There were many planes here including an SR71 Blackbird spy plane, the Airforce 1 plane used by LBJ and a Constellation used by Eisenhower.  There was a smaller private jet also used by LBJ and Lady Bird to fly to the short runway at their ranch.  LBJ called it Air Force 1/2. There were all types of helicopters, old tankers, every type of B-52 bombers and all of its predecessors.  We have been to many aircraft museums and beyond the number of planes here the number of different types of planes that we have never seen anywhere else was exceptional.

The bus trip trhough the Boneyard was interesting but everything was over there as the bus went by. Lots of planes, row after row.  Many half disassembled.  Pretty odd to see an airplane missing one wing propped up a wooden structure.  Or a missing landing gear or a missing rudder.

There is another commercial aircraft boneyard north of Tucson where big white older passenger jets are lined up for miles.

So, that’s enough for this post.  Internet access where we are is better in the morning, worse in the afternoon and usually pretty slow.
More later.
Roger and Susan