We got to the Diamond J RV park after hours so we stayed in the dry camp area (no hookups) overnight.  We weren’t there more than 5 minutes when a guy on a three wheeled tricycle-like bike with a hand crank mechanism for propelling it showed up.  He was over a couple rows with his Foretravel coach, a 40′, 2000, single slide. His name was Frank and his wife’s name was Susan and they were full timing with a home base in Maine.  One row away was a 1992 Foretravel GranVilla that had been restored at the factory including a full body paint job in 2009.  They were Kent and Peggy mostly full timing from Oklahoma.

The park office opened on Sunday morning about 11 AM so we checked in and moved to a new spot about four down the row from Kent and Peggy.  This campground is on the SW outskirts of the Tucson area. There is a ridge of mountains between where we were and Tucson proper so we were away from the city lights, traffic and other distractions.  The park backs uo to the Tucson County Mountain Park.  The park has its own campground and many miles of trails that are open to hikers and bikers and some to horseback. 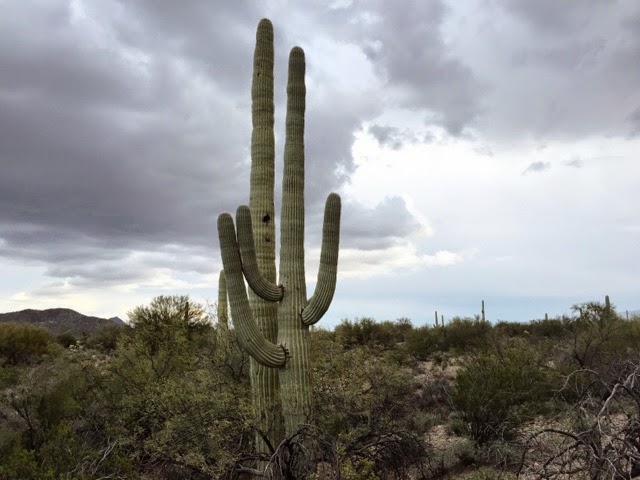 This area is where the Saguaro cactus grows.  In many areas they are like a forest. They are big things, some 20-24″ in diameter and 20′ or more tall.  I’ve never quite figured out why they have arms the way they do.  Some have one. Some have many. Some have arms on arms. I suppose it is like why trees have branches the way they do. Don’t over think it or your head will hurt.
So off we went hiking and biking on the trails.  Our maps were pretty minimal so it was good that there were a few trail signs, mostly painted on small rocks near intersections. 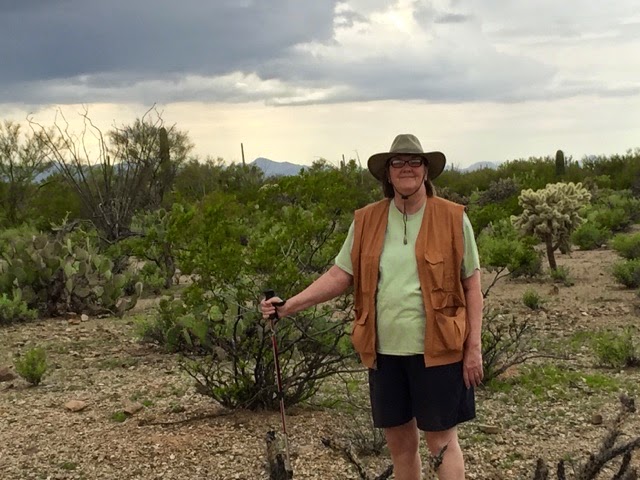 Susan brought her trusty hiking pole which would double as a snake defense tool or for fighting off the javelinas. Thankfully we saw no snakes here, but rabbits and birds.  Javelinas were seen elsewhere. It was late in the day, the clouds were gathering, we could see rain in the distance and felt a few drops ourselves on the way pack to the campground. 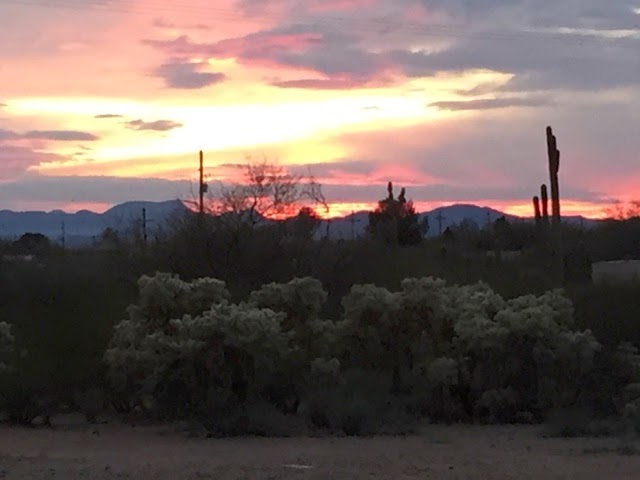 Clouds make sunsets more spectacular and every night we were there as the sun went down it was pretty amazing.
The next day we were heading for the Arizona-Sonoran Desert Museum.  This museum is inside the Tucson County Mountain Park only six miles or so from our campground.  A couple miles beyond that is the Saguaro National Park where we stopped first for a trip to the Visitor’s Center to pick up maps, a recommendation for hiking and a stroll through the nearby cactii gardens where everything was labeled. And then back to the Desert Museum.
The Desert Museum is a combination of zoo and museum.  There was several exhibits about geology and the history of the people in the area.  There was a large aquarium, a hummingbird walk through aviary, a walk through butterfly enclosure, several eating spots, long walks through plants of the desert, a cave to go through which highlighted the geological and natural history of the many caves in the area.  And finally there were animal enclosures that showed many of the animals, snakes, tortoises, scorpions and birds found in the desert. 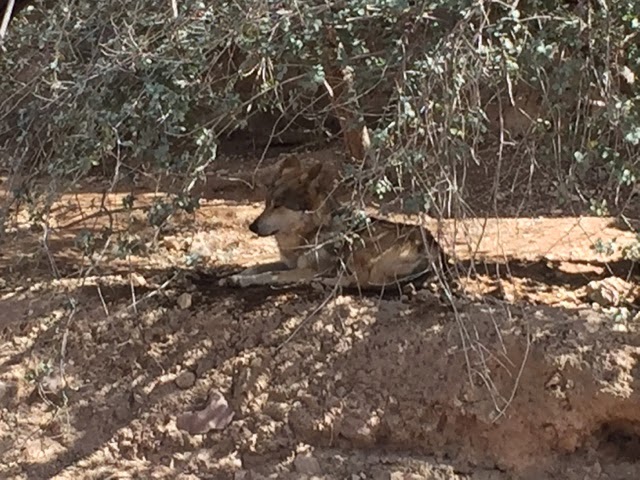 There was a Mexican gray wolf, mountain lions, a bobcat and more. 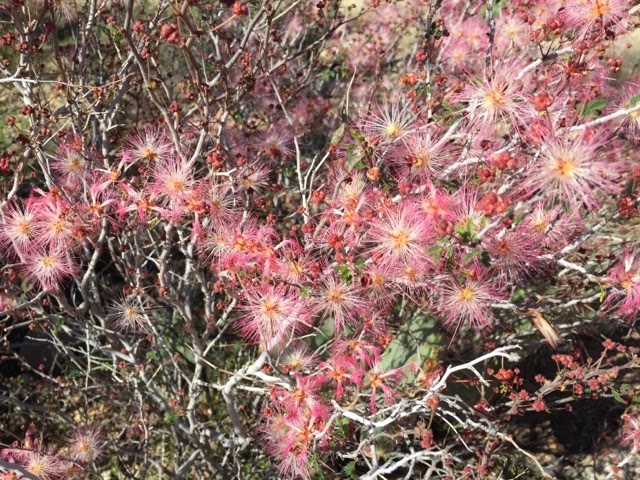 When the desert begins bloomomg it is spectacular. Everything blooms with flowers.  These were very delicate looking flowers on a very tough thorny bush. 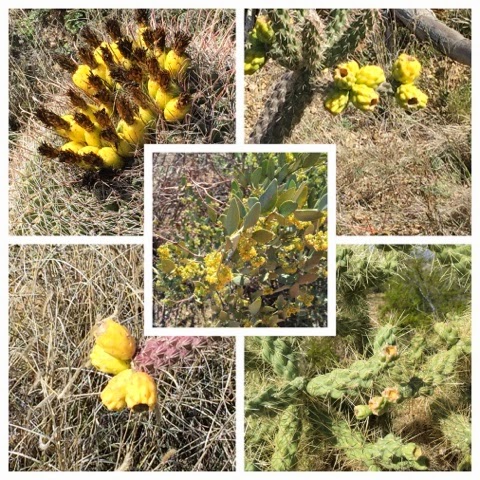 Yellow flowers seemed common.  The saguaro get white flowers on the ends of thier arms and have a red fleshy fruit that is harvested to make wine and jams by the local native american tribal people. 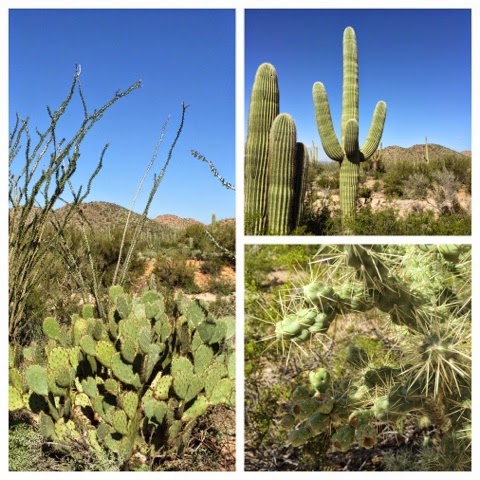 Ocotillio are tall and slender with small leaves and big thorns.  They have red flowers in the tips of the stalk when they bloom. 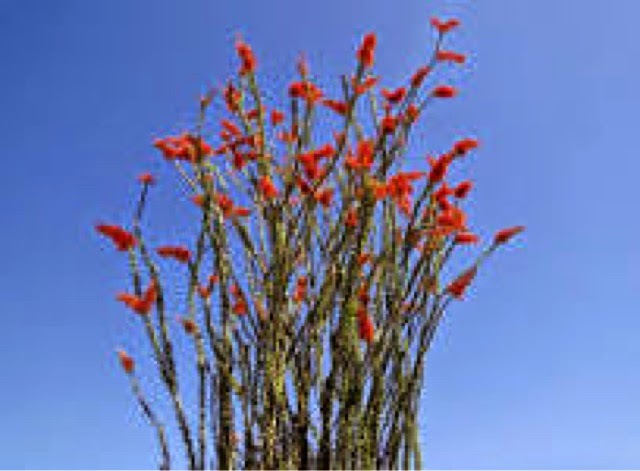 Then there are the flat prickly pear cactus and in the bottom right a very interesting cactus whose new growth looks like fruit but the older growth has very sharp barbed spines.  Pieces break off to start new plants.  They are called jumping cactus because they seem to jump at you and embed themselves into your fingers.  At least that is what happened to me.  It took 10 minutes to get the small piece off of me and pull all of the quills out.  I had to use a pliers.

They had a bird display where desert birds were shown close up. 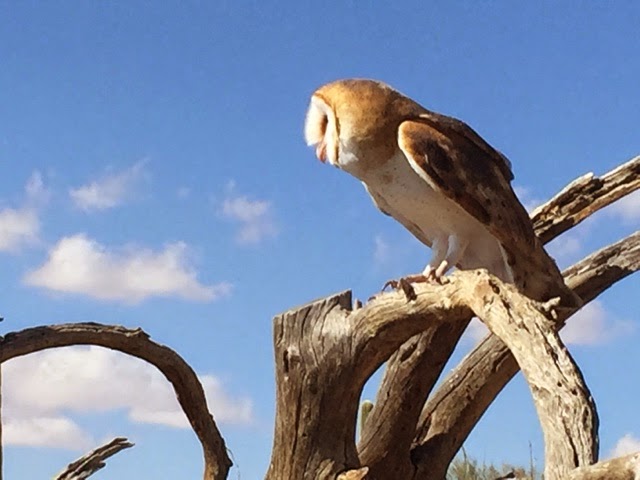 Barn owls live almost everywhere, even in the desert.  And there were hawks as well. 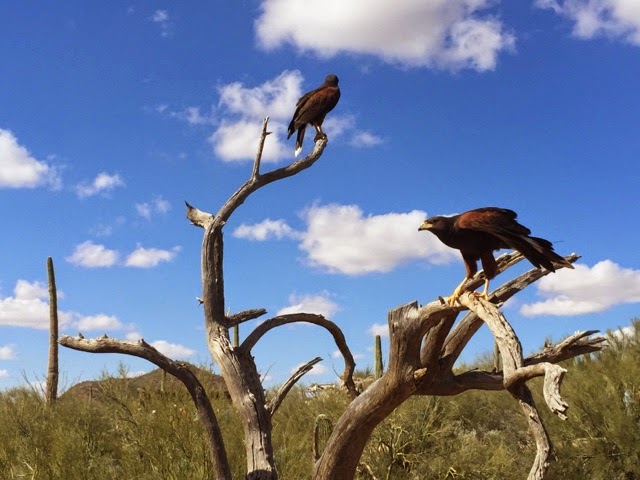 The birds flew very close to us, almost skimming our hair.

We went to the Desert Museum with Kent and Peggy, Ken and Dori and Carol, all Foretravel owners.  After we went to Carol and her husband Jeff’s house for cool drinks.  There we saw coyotes and Javelinas up close. Javelinas look sort of like pigs but they are peccaries. They have big sharp tusks and travel in groups and can be pretty aggressive.  They are pretty good size and stink. 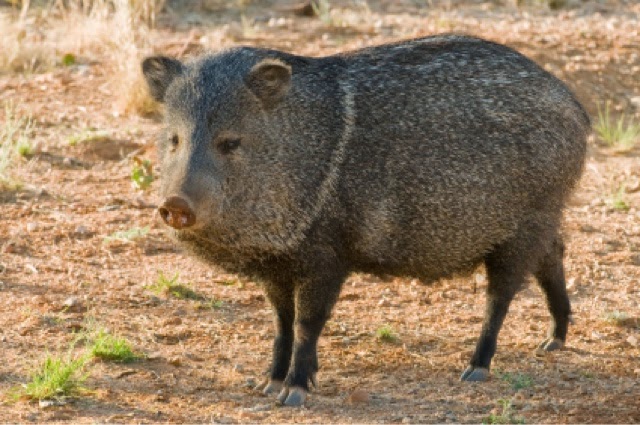 When we got back to the Diamond J there was a new neighbor. 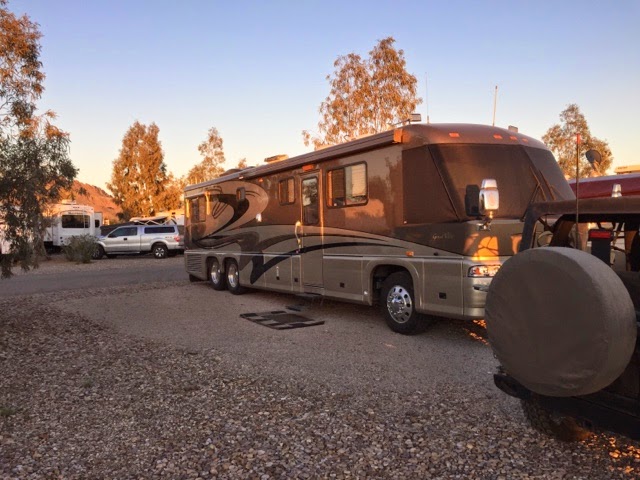 It was a 2003, 40′ GranVilla.  It is unique because it is the only one ever built with a tag axle (second rear axle) and it is the last one ever built. It belonged to Ed from California who drove over to see his friend who was there in a SOB (some other brand).

The next day we were off to the Davis Monthan Airforce Base where there is a museum of old planes and the BoneYard where all of the US services and many from other countries store old planes, lots of old planes.  Susan went with, bless her heart for putting up with another airplane museum.
More later.
Roger and Susan