I have to apologize for being tardy getting blog posts done.  We seem to have been very busy.  That is usually a good thing.

Deming, NM
Deming looks like a very sleepy town, not much going on.  There was a row of RV parks on the way into town.  They were mostly for folks there for the winter or in many cases the rest of their lives.  Lots of older trailers pretty well planted for the duration.  We stopped at the Sunrise RV park.  Sunset would have described it better.  A grizzled old man was in the office/hut wher he lived. He didn’t want us to fill out a form, he didn’t need our name or what we were driving or where we were from.  It was $17 so we paid cash and got a hand written receipt.  He showed us where our site was and we drove in.  There was an old lady with a barking dog next to us in a house paint decorated trailer that hadn’t moved in years.
We went down to the WalMart to get some groceries.  It seemed like a big WaMart for the size of the town.  We then drove down what looked like the main street past several car parts places and repair shops. Probably a good business in a small, older rural town.  There was a movie theater, a few restraunts, some churches and a sign pointing to ‘<-Museum'.  We drove down that way a couple blocks and found the museum.  It looked like a large old church at first glance but didn't  have a bell tower or anything like that.  The sign said it was closed but it would reopen the next morning at 9.  So we thought we could get up and return for a quick visit in the morning before moving on toward Tucson.
This is the Luna County historical museum.  It is in what used to be an armory from about WWI. It was expanded and made into a USO facility during WWII. We seemed to recall from something on PBS that Deming was a stop on the E-W railroad and that during WWII the USO people would come out and give the troops on the train sandwiches and things through the windows because they didn’t have time to get off.  We also seemed to recall a program about the Harvey Hotels and the Harvey girls.  And both were there in Deming.
A couple of chatty senior citizens greeted us, gave us a map of the museum and the five minute chin wag about the how and why.  This is a museum run entirely by volunteers.  It gets no money from the city or the county.  These two were from elsewhere visiting for the winter and busy volunteering.  Deming was a ranching and mining center back in the later 1800’s.  Big ranches, big mines for minerals, little mines looking for gold and such.  It had an Army Fort here.  During WWII it was a training center for bombardiers. All of that is long gone.  Today it is a small town servicing the needs of the the folks who live here, winter here and work on the ranches in the area. It is also a big rock hound area. There are lots of rocks to choose from.
Susan remembers coming down to Deming with her family in about 1958.  They drove from Duluth, Charlie and Gerry, Frank, Myra, Susan and little Nancy all in their red and white Ford station wagon all the way to  Deming, NM to the Spanish Stirrup Ranch owned by the May family for a working ranch experience. They went on horse back rides, ranch things, kid things.  They stayed in rooms in the big ranch house and ate with the family.  It wasn’t really a dude ranch experience.  They were just there at a working ranch to participate as much or little as they wanted to. The ranch is still there.  Thet have a rock shop now.  Mrs. May was active in the Museum and donated many things to it.  She died in 2010.
The museum is huge! There was a big room full of Old Timers Club memorabilia.  This was a club of familys who had been there for a long time, many since the mid 1800’s.  Lots of pictures from the 50’s when they had picnics and a parade and those long panorama pictures of all the Old Timers.
There was a whole room devoted to dolls.  They had more than 1000 dolls from old 1800’s German dolls to Raggedy Anns.  No Barbies, nothing much past the 50’s. 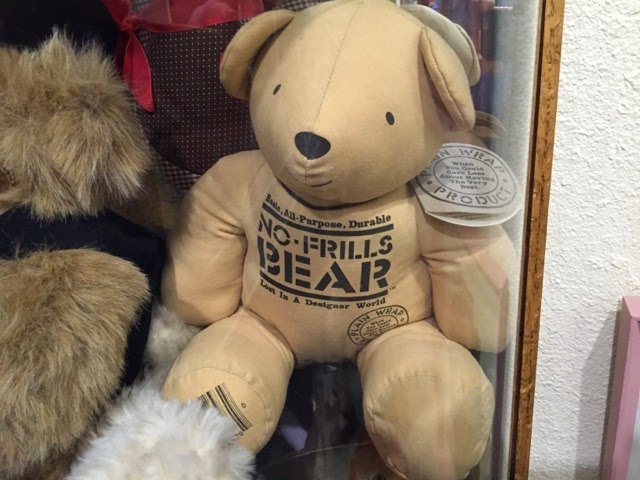 There was also more tha 1000 decorative whiskey bottles.  Some of these made up complete chess sets. Cars, birds, horses, knights.  I seem to remember a couple of these my folks had.  Someone down here was a serious collector/drinker. 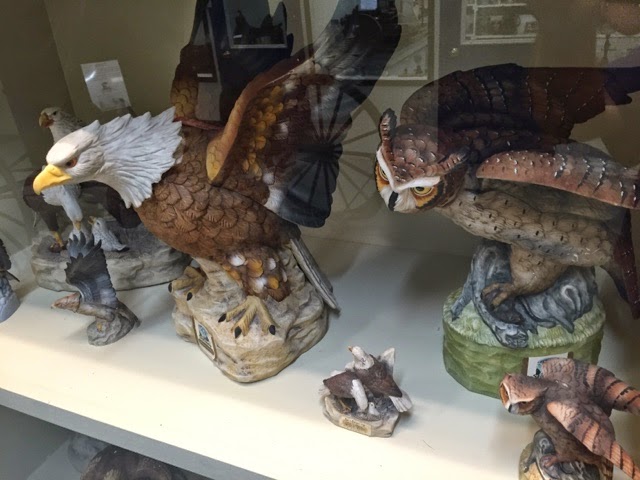 There was an extensive collection of very old pottery made by the Membres Indians all before about 1100 AD.  Those people are long gone but they buried their dead with pottery.  Most of the pottery was broken over time and then dug up and reassembled for display. Most of this activity came before WWII when archeological preservation was not well practiced.  So where much of the pottery was found, how the graves were arranged, what artifacts were included was not recorded.
There were lots of ancient indian tools, beads, jewelery, arrow and spear points too.  No baskets, clothing or anything else like that.  At that time the Indians of the SW traveled long distances to trade with other groups. The shells used for decorative jewelery probably came from the Sea of Cortez in Mexico.
The folks that lived in Deming in the early 20th century were pretty well off. Business must have been good.  There was an extensive collection of very fancy clothes, dresses and men’s formal wear.  They all looked very warm for the desert climate.
One big room has a very formal dining room set up for Valentines Day complete with a lace table cloth, gold rimmed plates and gold tableware.  There were cabinets all around with collections of dishes and silver.  All of these were quite stunning as was the furniture.  There was money here at one time. 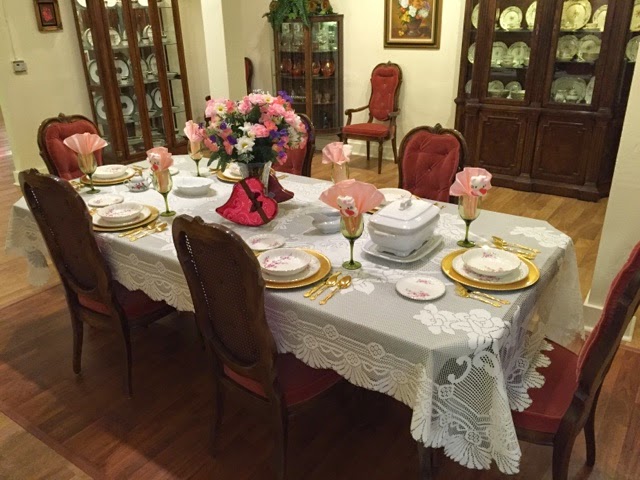 There was lots of art too.  This painting really caught my eye. It was about four feet tall and very captivating to look at. The artist is well known but i found no prints of this painting. 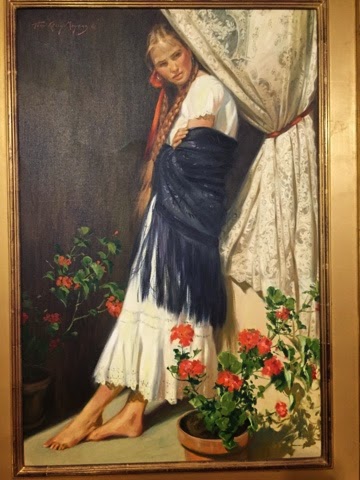 And quilts.  This one was made on thousands of small pieces of fabric, almost like painting.  It was behind glass, hard to get a good picture. 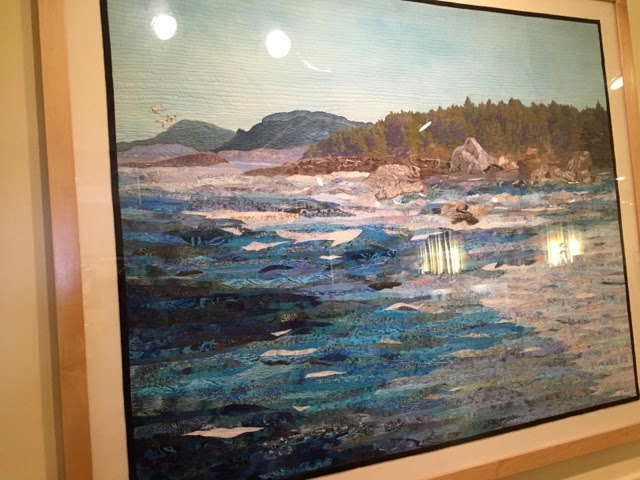 And a nice NM quilt. 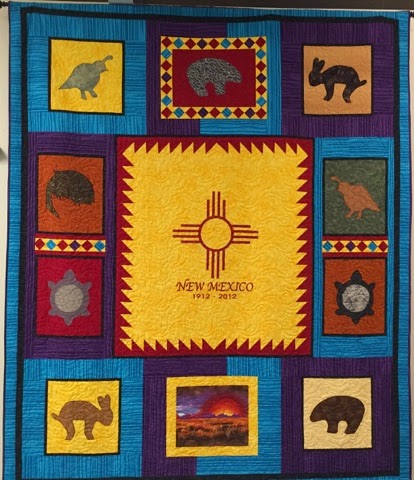 They had saved Main Street as well.  The Doctor’s office, the Dentists office, the barber shop, the pharmacy, a saddle shop (that had a saddle from the Spanish Stirrup Ranch) and many more store fronts.  Imagine getting your hair curled with this. 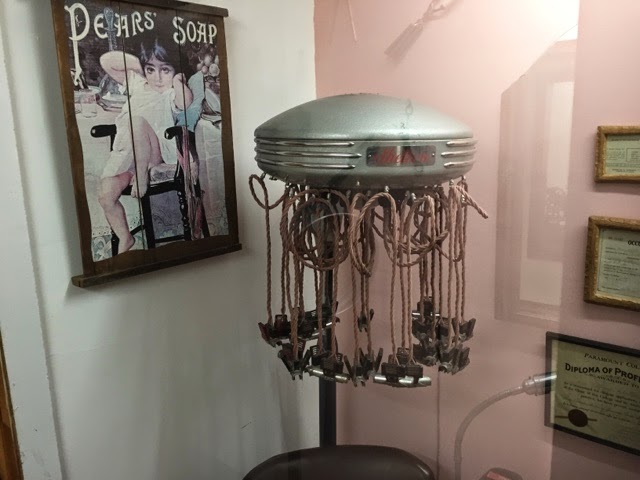 The fire department was there. 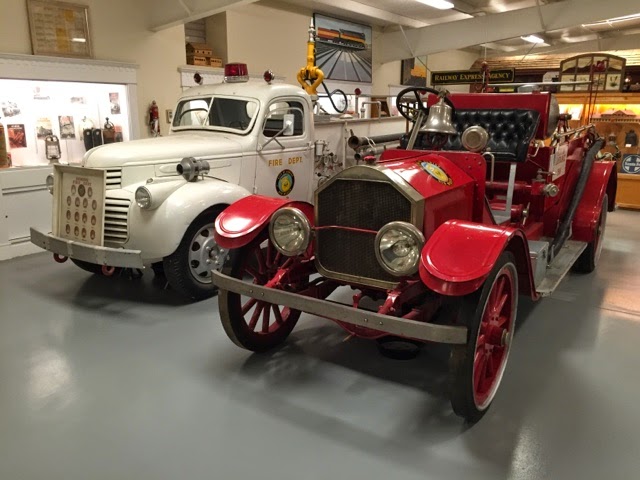 Even the Soap Box Derby racers.

There was a large WWII exhibit dedicated to the men from Luna County who went to war.   Before WWII there was a large Army Coastal Guard reserve unit in the county.  Almost all the men were part of it.  In 1940 before the US entered the War, the reserve unit was activated and sent to the Philippines.  They were all there, almost 1800 men, all from the Deming area at the time of Pearl Harbor.  At the same time the Japanese Army and Navy invaded the Philippines.  These men were captured at the battle of Corregidor.  More than 900 died on the Battan Death March and subsequent imprisonment. Pretty tough on the local community.
There were other memorials to all of the service men and women in the different conflicts.
So after about three hours we were due to head to Tucson, four hours estimated , five and a half as we did it.  We came into Tucson from the south, down hill most of the way with a tail wind.  A good fuel milege day. We were heading for Dustin’s Diamond J RV park on the SW part of the Tucson area.
We were leaving the very bleak West Texas and southern NM desert and heading into more brush, a bit greener landscape and saguaro cactus.
All is well here.
More later, actually sooner I hope.
Roger and Susan