Rides with Brad and Phyllis

Our first and third ride in the desert was to the top of a big rock mountain with a giant “P” on the side and a forest of antennas on top. It is Black Peak.  We saw no roads or trails to where the “P” is. They had to use hundreds and hundreds of gallons of white paint. It was probably sponsered by the local Sherwin Williams paint store and done by agile high school kids.
Black Peak is east of Parker about 10 miles. It is just a big rock out in the middle of the desert. North of the rock are sand dunes about 150 ft high, a mile or so wide and several miles long. We left the campground, headed a bit south to where we went into the desert, followed a set of power lines through some really deep washes and came out to the sand dunes. Up over the dunes, further south, around the bottom of Black Peak and up the road to the summit.  It is about two miles to the top and about 1,500 ft up. That means an average grade of 15%. That is pretty steep.
Brad is a farmer from Virginia. His wife Phyllis was a school teacher. He really likes to drive off road especially in the sand dunes. He has a four seat Can-Am Maverick X. It is like a giant ATV. 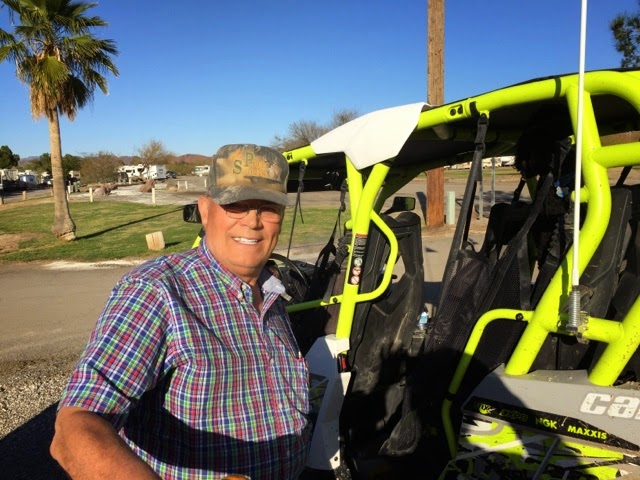 On the first trip to the top we all went with Brad. The second time I drove the Jeep and brought along the dash cam. It takes great live action video from which I was able to get some snap shots. Too bad I can’t plug in video in the blog.
Barney is Brad’s standard poodle. When there is room Barney loves to go for a ride. 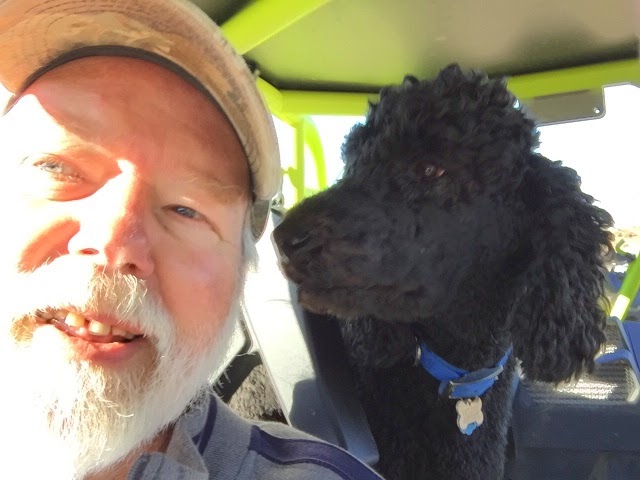 He is always putting that wet nose on your ear. He is a great dog. At about a year and a half old, there is still a lot of puppy there.
Most of the road up Black Peak was very steep and very narrow with pretty much nothing but straight down on one side. Susan does not like these situations very much.

It is amazing what you can find on the internet. Here is Black Peak from overhead. You can see the “P” and the road going up to the top. 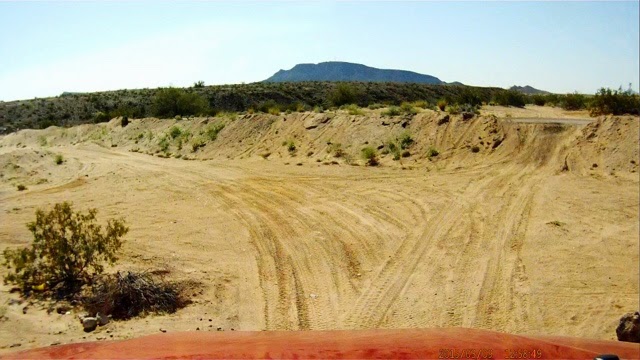 Off we go. The red at the bottom is the hood of the Jeep. Black Peak in the distance. 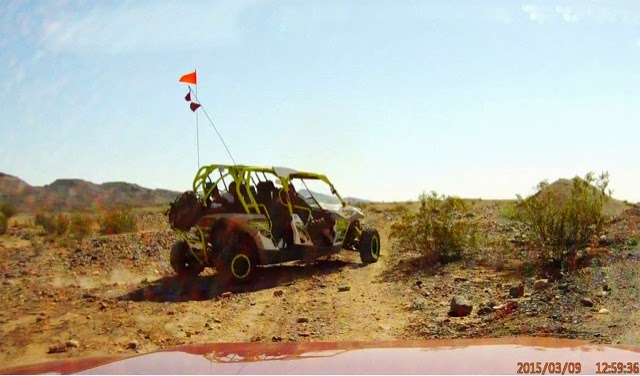 Brad likes to lead. He has an orange triangle flag and another with a red ladies unmentionable.  I needed a flag so I found one that suits me. 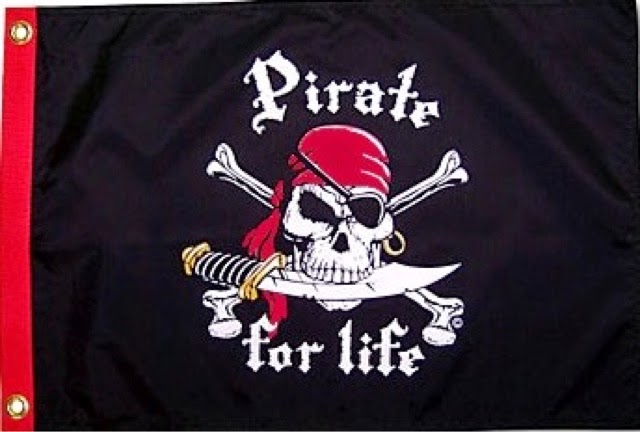 The power line trail had some very steep ups and downs. Fun. Black Peak beyond. It felt like it was straight down. 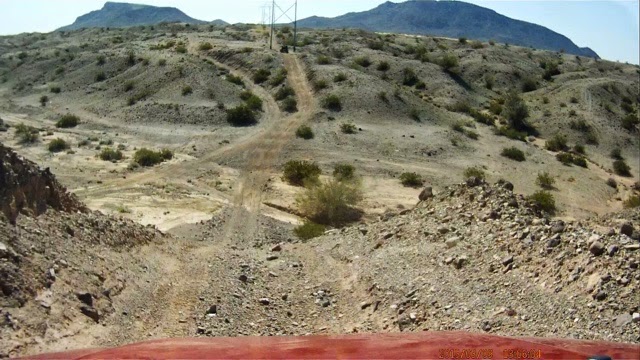 And then came the sand dunes. They were challenging. Brad’s machine just went right up them no problem. It was tougher with the Jeep in the soft sand. 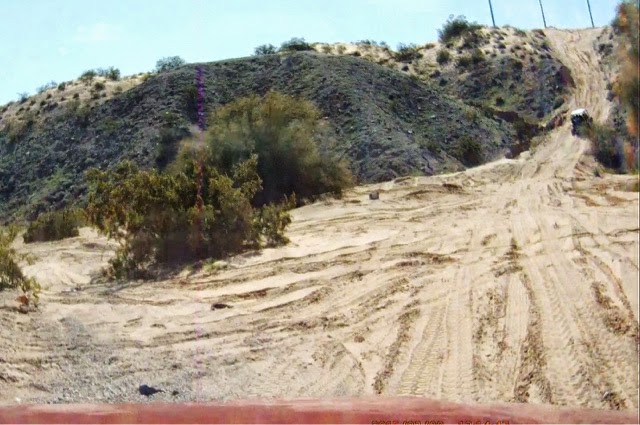 And then through the sand dunes towards Black Peak. 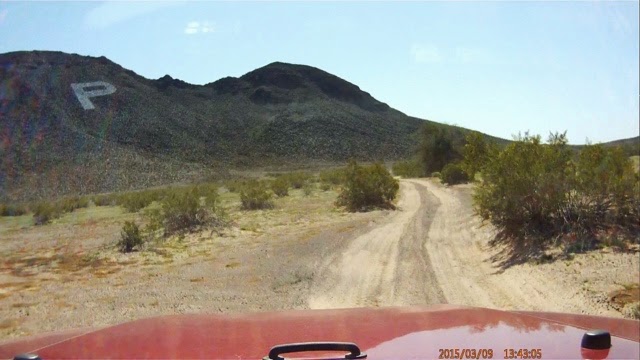 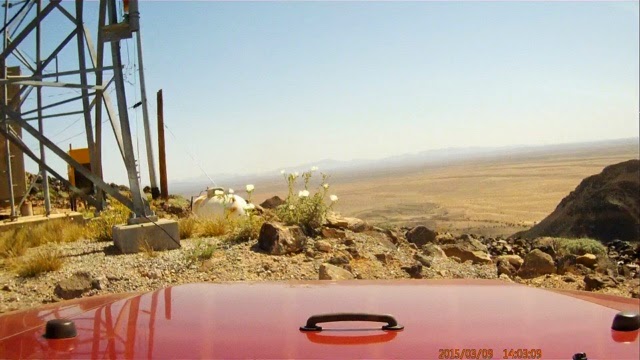 You get a better idea of the grade going down.  Same speed down.  Slow and bumpy. 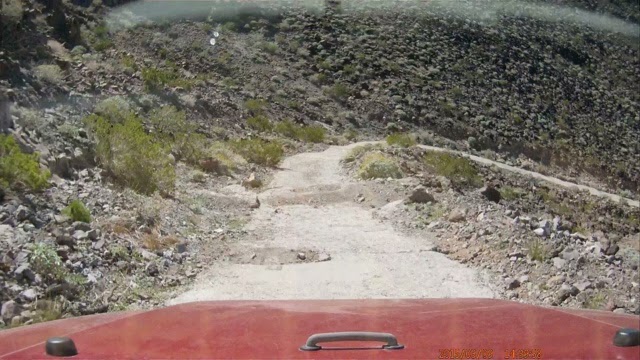 Some parts of this road had a thin layer of concrete over the rocks. It was put down when the first antennas went up there more than 30 years ago. The story goes that they used prison labor to haul buckets of concrete up the hill one at a time. It just got dumped on the rocks and spread around with shovels and rakes. Most of it is broken up now with big holes, broken edges and sections washed out.  It wasn’t much easier to drive up or down on these sections than on the sections that were just rocks.
We went out for three to four hours at a time. Lots of fun. After one ride we went to the bar and grill just down from the campground for a late lunch. 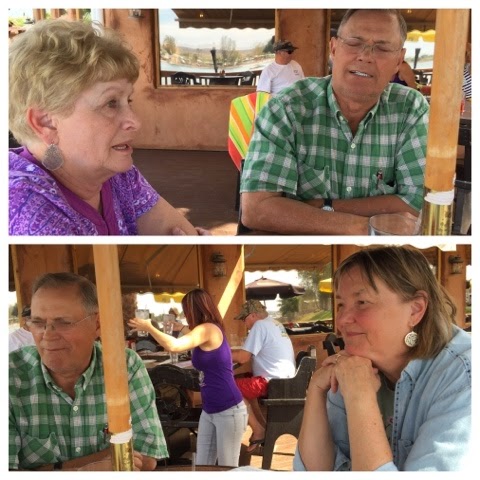 A nice way to end a day in the desert.
Brad and Phyllis are nice folks.  We knew of them through the Foretravel forum, an online community of more than 3,000 Foretravel owners and people interested in Fortravels.  We almost met them last winter near the Great Smokies.  Timing just didn’t work out but we did see them heading east on the freeway just north of the Somkies as we were heading west.  Phyllis likes to bake bread so we compared notes. Neither of us had tried making bread in the coach so we gave it a go. It works!  The convection ovens work well.  We have done cakes, corn bread, cookies, cupcakes and now bread.
More later.
Roger and Susan