Durango is about 40 miles east of Cortez so we took a day and drove over there. This is another place we have been to in the past. We thought we might take the narrow guage train up to Silverton but that run had not started for the season yet. There was a shorter trip but it left a 9 AM. So we just drove over, spent a few hours walking around, had lunch and drove home.
I am sure if we had stayed in the area that we would have found much more interesting stuff to do but Durango for a few hours was just like Prescott, a nice old town converted into a tourist oriented town. At least this helps to preserve the old buildings and to some degree the look of the old town.  We walked quite a ways up and down the main street of old Durango where the old business buildings, the old stores, the banks the train station and all of the other early buildings were.  Virtually every one is now a restaraunt, a store selling new age trinkets, sandals, an extraodinarily high priced mountaineering store, unusable antiques stores, crystals, beads and Sedona wanna-be stuff, probably a dozen shoe stores, some very high end clothing stores, t-shirt shops and every other thing you can imagine to milk every possible dollar out of the tourist who comes to Durango hoping for that old west experience.
I don’t think that in 10 or 12 blocks on either side we saw a single store or restaurant that any ordinary resident of the the area would have shopped or eaten at.  I am sure some blocks away there is a real hardware store or places where people who live there shop.  It is too bad that what we remembered about Durango is gone at least what we saw way back when is gone.  We contrasted that to Cortez where the main street is where all of the commerce of everyday life seemed to go on.
But like so many towns Durango has adapted to changing times and survived. The Durango, Pagosa Springs, Chama area has always been a favorite place we remember.
The train depot was old with a silver mining past. Part of it is now a museum which was interesting. 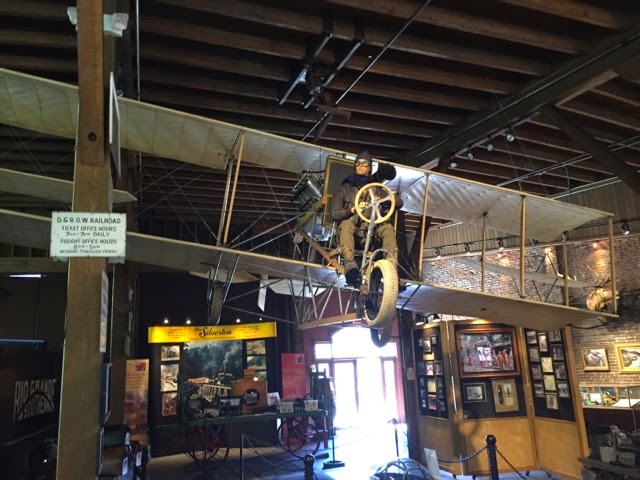 This old Curtis airplane was the first airplane to fly into Durango, or so they claimed. There was a big model railroad sort of depicting Durango, old cars and trucks and lost of other old stuff. 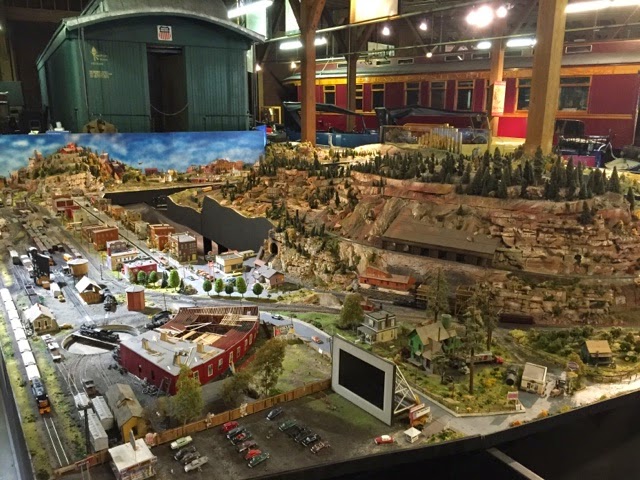 The model of the drive-in movie theater had a modern day tablet for the screen. The museum was in the old roundhouse, a building where locomotives and rail cars could be maintained or repaired.  The tracks leading into the roundhouse were like spokes on a wheel fed by a big turntable in the center. Buildings like this have rarely survived. I would have put in a picture but none that I took would have helped you understand.

We left Cortez and drove south towards Shiprock, NM and then a bit east through Farmington, NM (the fourth largest city in NM) and just a few miles more to the San Juan County Fairgrounds where they have cheap RV camping with electric and water hookups.  The fairgrounds are immense.  They have barns for many hundreds of horses and cattle and sheep and what ever else they show at the fair, room for 560 RVs with electric and water hookups and a dump station, a casino/race track for gamblers/horses and room for thousands of cars. The County Fair must be a really big event.  They also have other events there as well.  While we were there the Passion Play was being presented each evening.  Several hundred cars showed up each evening and then left.  As far as we could tell there was only one other RV there and they were quite a ways from us. 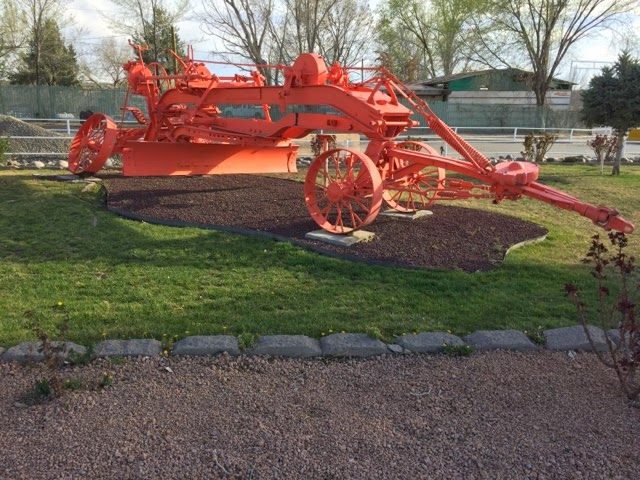 This is what road graders used to look like.
We stayed there so we could drive down to Chaco Culture National Historic Park. It was about 30 miles south from Farmington and then more than 20 miles west on a rough dirt road. Chaco Canyon is another World Heritage Site. From about 800 AD to 1200 AD Chaco Canyon was a cultural, ceremonial, religous and learning center for the Ancestral Puebloans who lived in much of the Four Corners area, some several hundred miles away.  It was also a major trading center for other indigenous peoples from Mexico to the south, the great plains to the north east and from Nevada and California to the west.
Chaco Canyon is a shallow canyon among the mesas and buttes of this region. There is evidence of a small river that ran through the canyon although it would have been dry at most times of the year. When it rained (about 10″ per year) water would flow off the mesas that made up the sides of the canyon. This water was caught in catch basins where evidence of small dams has been found. At the head of the canyon is Fajada Butte. This along with some of the surounding peaks formed sacred alignments marking the canyon’s significance. The top of Fajada Butte has many monuments and structures that are used for marking solar, lunar and cardinal directions and events.
Unlike the great cliff houses of Mesa Verde, Chacoans built their great houses on the canyon floor mostly near the south facing canyon wall. There were dozens of Chacoan Great Houses built throughout the canyon.  There were massive stone structures with hundreds of rooms in mutliple stories.  The appear to have definite plans from the start but some took centuries to complete.  Each is shaped like a D with the straight side facing towards the mid-day sun and precisely aligned with the rising sun on the spring equinox.  Researchers have found markers on the canyon edges, sometimes several miles apart that mark the exact alignment of the spring and fall equinox of the sun as well as moon alignments.  All of these markings were used to align buildings and roadways s well as to signal planting times and other seasonal events.
All of these dozens of great houses were built so that they could see and communicate with each other.  Prehistoric roads led from Chaco in precise alignment to more than 150 other distant Great Houses in the region.  These roads were essentially straight lines from Chaco on which many other distant Great Houses were located.  Where cliffs or other obstructions blocked the way, stairways and ramps maintained the alignment.

The biggest of the Great Houses is Pueblo Bonito. Obviously, this is not what the Chacoans called it. Actually no one knows what the Ancestral Puebloans called themselves or this place. There are no written records of any type and only oral histories and legends give any clue as to what Chaco Canyon was called.
This is a painting of what Pueblo Bonito likely looked like around 1100. It had several hundred rooms and more than 20 Kivas of different sizes at different levels. They were built over hundreds of years, the designs evolved, the construction methods changed and they were likely for different clans visiting from distant pueblos. No way to really know.
When Chaco Canyon was discovered all of these Great Houses were buried under hundreds of years of blowing sand and dirt.  The early explorations excavated and exploited what they found.  It wasn’t until the early 1900’s that scientific efforts took over and preservation became a prime motivation. 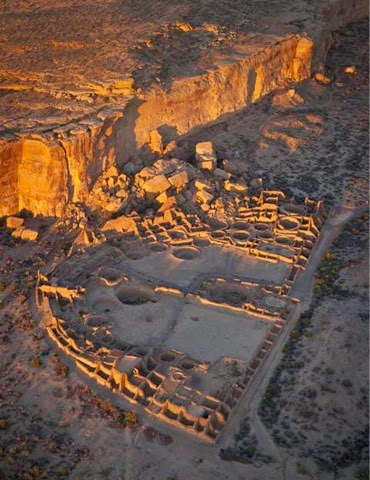 An arial view (not my picture) shows what Pueblo Bonito looks like today. We have always wondered if any of the cliffs ever collapsed and here we saw where the entire cliff face collapsed around 1960 and crushed the upper section of the Great House. 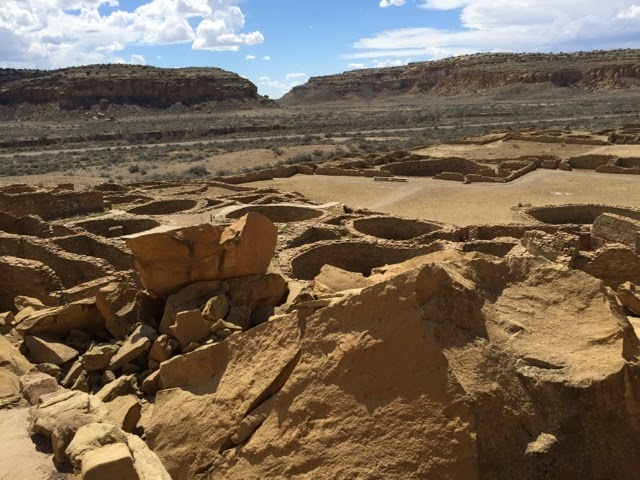 Trails through these structures are pretty organized, you can only go where they go.  Here we climbed over the fallen cliff face along the back wall. 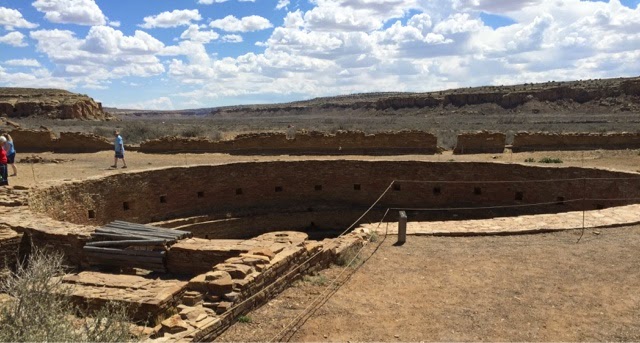 We have never seen Kivas this big.  These were three or four times bigger than any we had seen before. 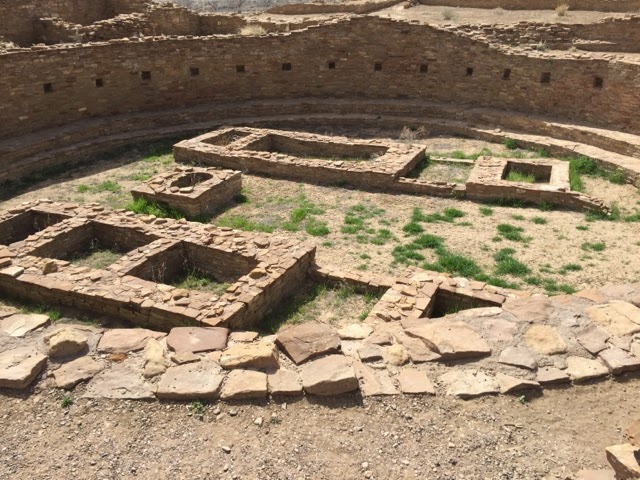 These Kivas had high walls and were covered by a complex roof system. The inside walls would have been plastered and decorated.  Each Kiva had four foundations for the vertical wooden columns holding up the roof. The fire pits and Sipapu (the portal from which their ancestors emerge to the present world) were very similar in all Kivas no matter when they were built. Present day Navajo believe they are now in the fifth world. Kivas were used for ceremonial, ritual and religous purposes by both men and women.

The Chacoans used stone and a clay based mortar to build with.  They had no metal tools to shape stones just stone tools.  And yet their stone work is precise. 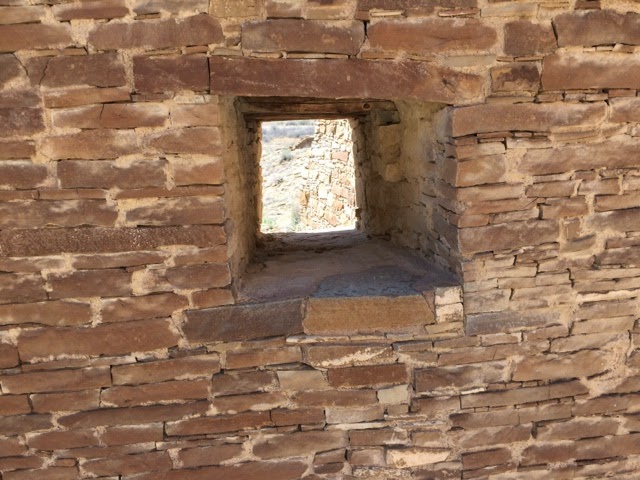 This is an older building style with bigger stones, still cut precisely. 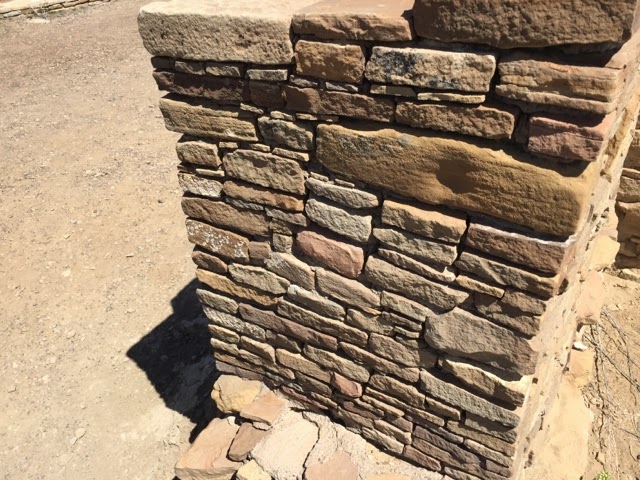 Later styles used smaller stones tightly fit together as bigger stones were getting harder to find.  These walls were all covered with a smooth plaster. 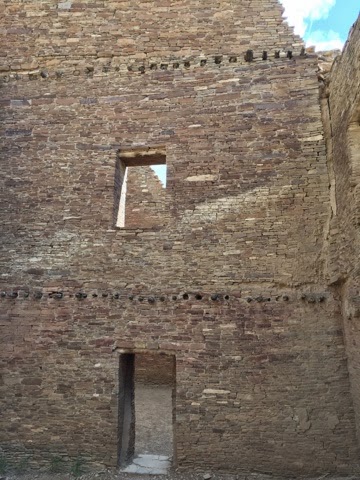 There were few windows, doors were of different styles which evolved over time.  Floors were made with wooden poles embedded in the walls and covered with layers of bark and plaster. The ends of the original wooden poles are still in the walls. 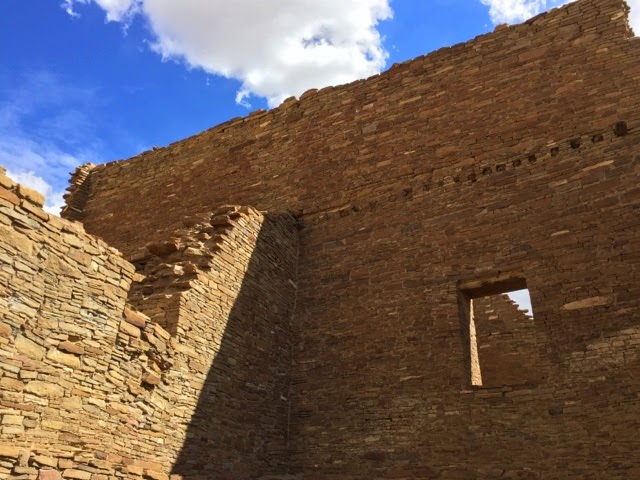 There was room in Chaco Canyon for many thousands of people and yet archeologists think that less than  2000 lived there as permanent residents.  People came from long distances to be there at special times.  Many people came and stayed for a summer or a whole year to learn and to build.  They would take the latest building techniques back to thei home pueblos for use there.  There was clear Mayan influences from Mexico that are unique to Chaco which indicated a very wide influence.
There wasn’t enough agricultural areas to grow enough food for all of these people so it is assumed that visitors brought their own food, goods to trade and their own tools.  Groups from different clans would build a Kiva for their own use perhaps, maybe the reason for so many.  They would return with new trade items, new skills and building techniques, maybe new tools or ideas about ways to make tools.  It must have been almost like a college town with a transient population and a fixed population.
We visited about a half dozen sites.  There were many others to see as well and hiking trails to more. They quit digging up sites long ago now that thay have ground penetrating radar to see what is underground and map out what is there.  Leaving them buried is the best way to preserve them.  Even in Pueblo Bonito most of it that was excavated has been reburied after damage to the walls was repaired.  The exposed walls are carefully cataloged and there are teams there continually repairing and  restoring the walls.  They use hand cut stones to fit as exactly as they can and mortar made in the original way but with additives to make it last longer.
This entire canyon remains a sacred place to Native Americans who still come here every year.  This place is in their history, ritual, culture and myths and beliefs.  All of this long before any Europeans arrived.  I am not so sure about alien visitors though.
While we were there the sun was bright, hats were good. 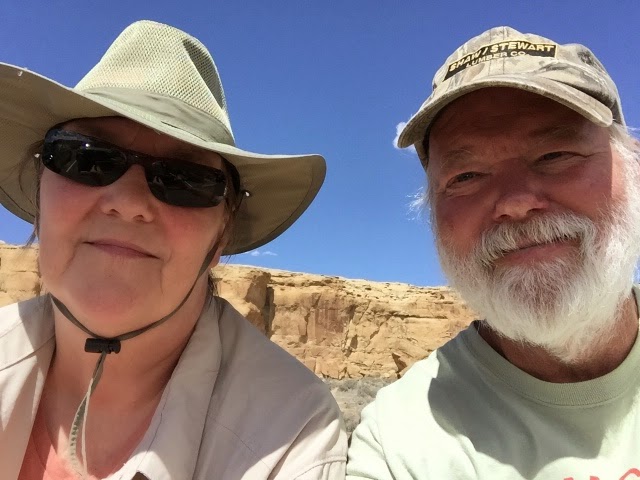 When we were in this area in 1980 we visited Canyon de Chelly, another Puebloan site about 50 miles west.  It was in a deeper canyon with a river, a very nice site with cliff houses and much easier to get to.  On our way back from Chaco Canyon there were big black clouds on the horizon. It looked like rain.  Lots of wind but it never rained and by the time we got back to the fairgrounds the sun was out again.
Next up, Cochiti Lake on the Rio Grande River near the Cochiti Pueblo, about 40 miles south of Santa Fe.
More later.
Roger and Susan