We were hoping that the weather would be OK so that we could get up to Mesa Verde National Park.  It is another place we visited in 1980 and haven’t been back to since. The long time weather averages suggested it would be OK, cold at night but warmer during the day. The campground in the Park was not open yet nor were the two campgrounds near the entrance to the Park so we chose the Sundance RV Park in Cortez, CO about 10 miles to the west. It was a very nice RV park with a huge city park across the street. The park was almost full with a lot of trailers and RVs that looked as if they were set up for the long haul. I talked to the owner and he told me that a very big natural gas deposit was found just to the north and that a company from New Mexico was doing the development work and had rented about 2/3 of the park for nine years. He thought that was good and had spent money on the laundry, showers and bathrooms, They were very nice. He said the best thing was that almost everyone who was working at the new gas site were local people as well as most of the subcontractors  It was a big deal for Cortez which is regional center for the Four Corners area. 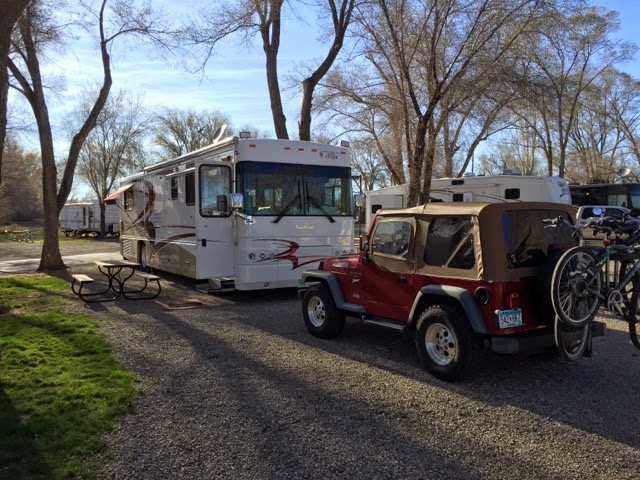 Nice trees, starting to leaf out. We would go back there.
We packed snacks, hiking shoes and a bunch of water and set off for Mesa Verde. The weather was warm in the morning and upper 70’s forecast for the afternoon.
The Mesa Verde area covers 520 sq miles of high mesa areas cut with deep canyons. Mesa Verde was named by Spanish explorers and means green table. The Park today includes 81 square miles of land and canyon with more than 600 cliff houses, many mesa top archeological sites and many more undiscovered sites. It has been designated a World Heritage Site.
There is a new Visitor’s Center at the entrance to the park. It explained how the Ancestral Puebloans lived here on top of the mesa and in the cliff houses in the canyons. They lived there from about 550AD until about 1300. The early dwellers lived mostly on top of the mesa in an evolving building style of pit houses. These gradually got deeper and larger. Their influence lasted to the Kiva designs of the later inhabitants of the cliff houses. At Mesa Verde’s peak there were 35,000 Puebloan people living on the Mesa and in the valley just to the north. Today the population in the same area is only about 20,000. 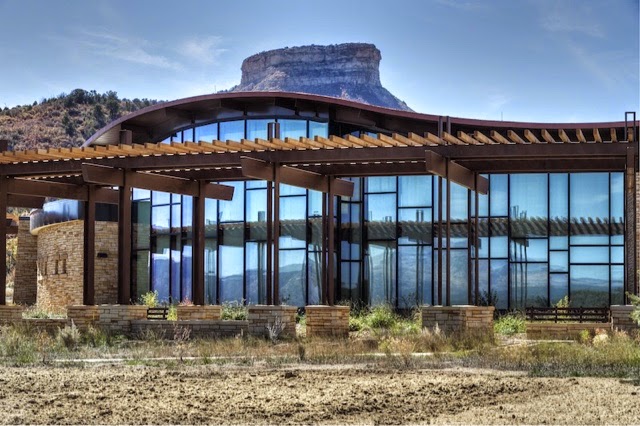 This was not here in 1980, just opened a couple of years ago. The original Visitor’s Center was 25+ miles into the park. 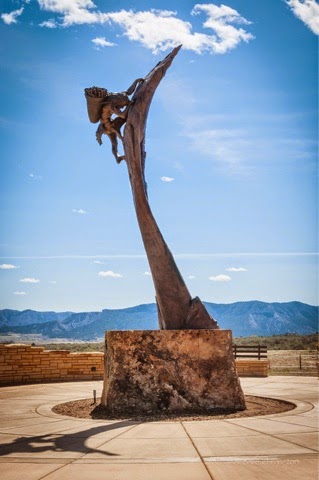 This sculpture near the entrance to the Visitor’s Center depicts the way the Puebloan people got to their cliff houses. They climbed up and down the steep cliff sides carrying bundles using just small hand and foot holes pecked into the stone face. They had no metal tools, only stone to make hammers, chisels and axes. Life was hard and short.

From the Visitor’s Center at 6,500 ft elevation a steep winding road leads about 6 miles to the campground and then 8 miles of more winding roads, a tunnel and some steep sections to Park Point Overlook where at about 8,600 ft elevation there is one of three fire lookouts in the park. These are important places for the park. Since 2000 there has been three major fires which have burned well over half of the mesa. 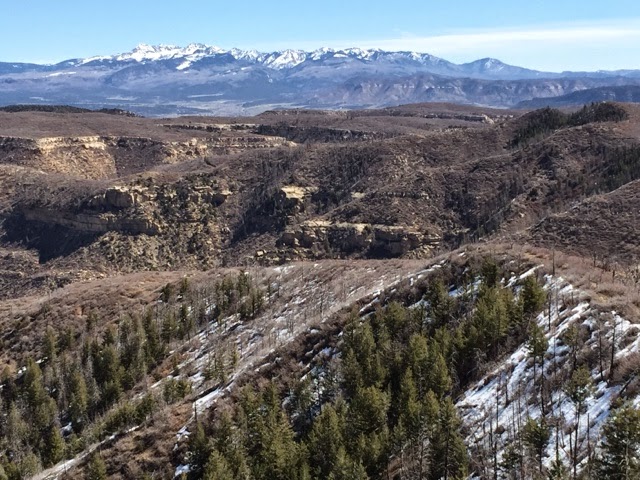 Technically it is not a mesa since it is not flat. It is called a cuesta since it has a consistant slope of about 3 degrees towards the south. The south facing slope gives the land more sun and increases the growing season on the mesa top by as much as 21 days compared to the lower elevation valley.
Another 8 miles out on the Mesa and you come to the Far View Sites. These are a collection of more than 50 farming villages from 900 to 1300 AD. These villages evolved from pit houses to pueblo style building sites with extensive dry land farming areas. There were reservoirs for water but the fields were generally not irrigated. They were more likely used to supply household water needs. Preservation experts have added a compatable cap of mortar onto the top of the remaining walls to keep them stable. 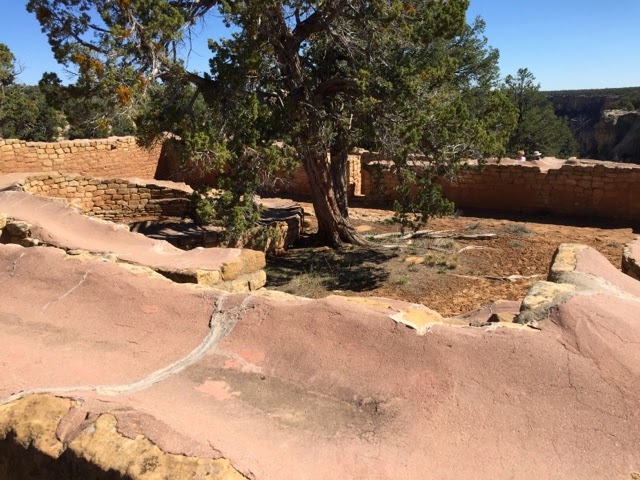 The road goes on and splits. One way heads down the Wetherhill Mesa which was not open at this time of the year. There are many cliff dwellings out at the end of this mesa and when it is open the only way to see them is by tram. Car traffic was stopped long ago to reduce the impact on the area. We rode the trams in 1980.
The other road heads down the Chapin Mesa. There is the original Visitor’s Center and an interesting archeology museum, gift shops and a small restaurant. The museum did a great job of depicting everyday life over time. It showed the development of tools, building materials, plant materials used for making clothes and sandals, the use of pottery, the beginning of the use of cotton and other materials for weaving and quite a bit of archeologists best guesses at family and cultural structure. Culture, the seasons, daily work, traditions and rituals and their spritual life were closely linked. Most of this is not really known since there were no written records but it is inferred from the oral histories of many Puebloan communities that exist today.
Lunch was a shared Frito Pie. 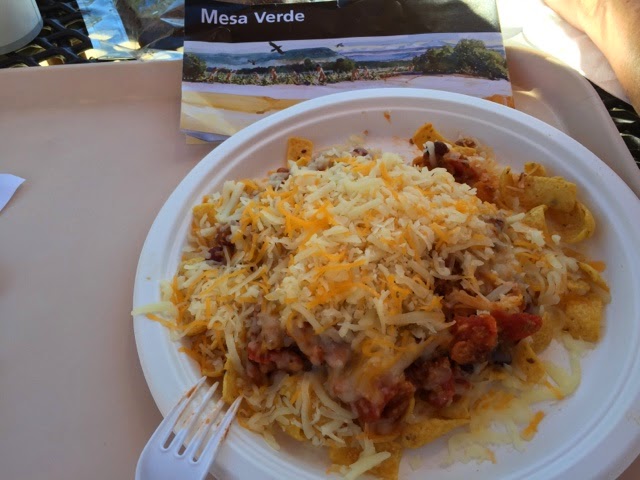 Chili on Fritos with cheese.  Tasty.

Spruce Tree House is a cliff dwelling that has been excavated and stabilized. There are trails down to see it today. There were no trails when several hundred people lived here. Rangers were there to answer questions and to suggest appropriate behavior as needed. 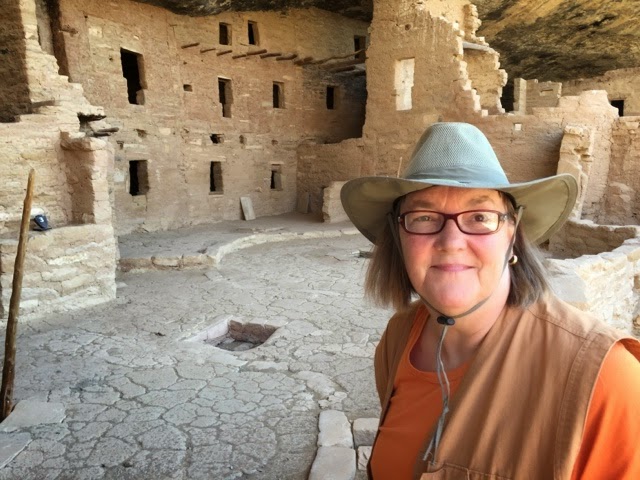 There were several Kivas, places for ritual, ceremonial and religous events and three to four story buildings going back many rooms into the cliff openings. This particular cliff house had been opened up by looters before archeologists and historians got to it but even still their restoration and stabilization work is only about 5% of what is there today. The Puebloans closed most of the openings into these structures when they left. Much of what was left was buried under windblown sand and dirt. So careful excavation reveals what survived and what was left behind. 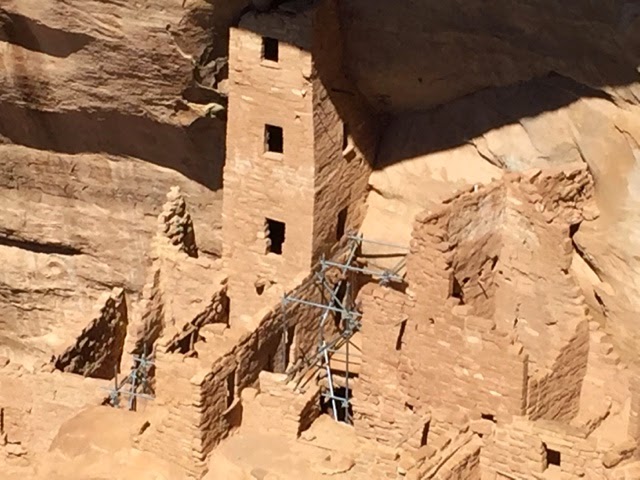 The Square Tower House had some modern day supports while stabilization work was being done.  The square tower was unusual.  While structures were more or less square cornered, towers and kiva were round. There is no explanation for this other than it was an adaptation of earlier buliding techniques or something learned from visiting other Puebloan sites in the Four Corners area. 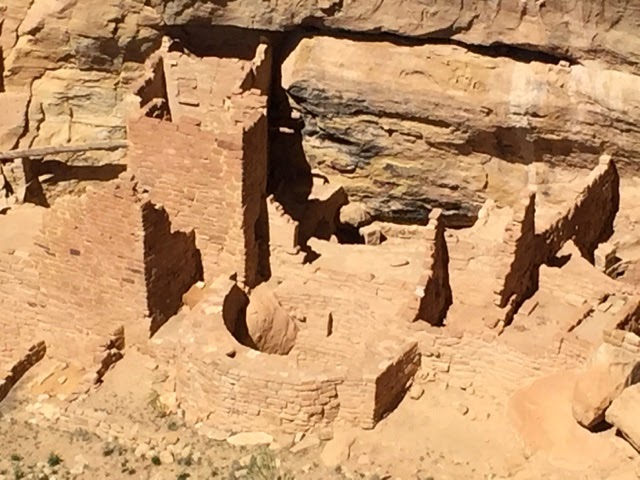 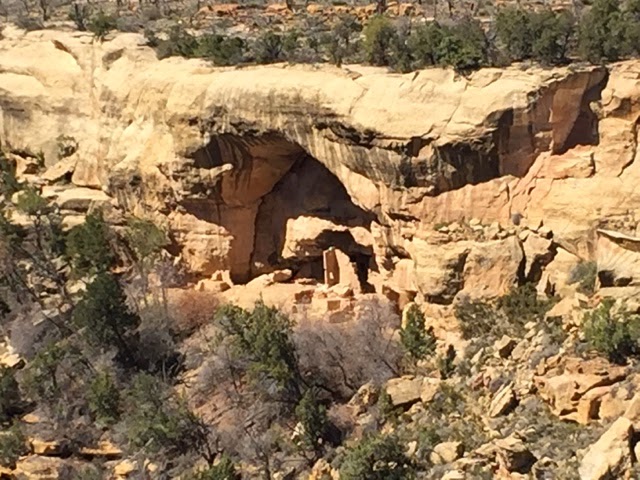 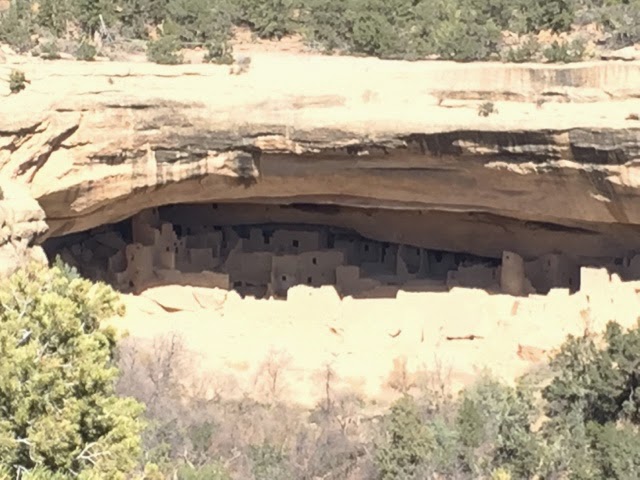 This is the Cliff Palace as they call it today. Likely something else back then. 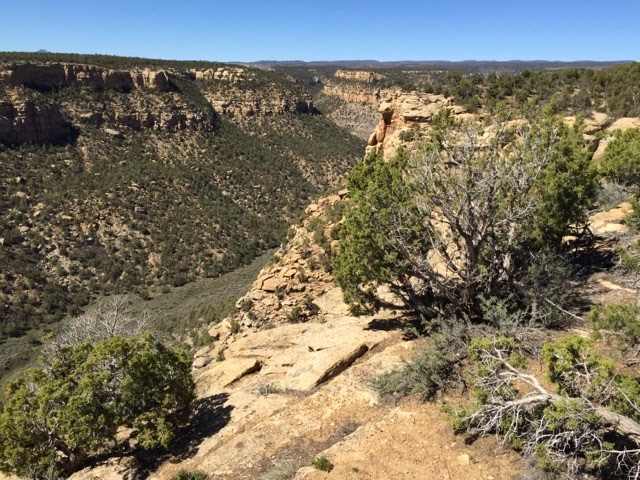 This is Navajo Canyon, several miles long and a few thousand feet deep. There was no easy way to go from one side to the other. From these communities to the communities in the valley to the north of Mesa Verda it was a 30 mile or more trip. And yet they did travel far and wide.

There is evidence of trade for things like sea shells, turquoise, bird feathers, even pipestone from MN.  The Puebloan people had a very wide spread cultural reach into New Mexico, Arizona, parts of Nevada and Utah and traded with other cultures from thousands of miles away. But it was more than goods they traded, they learned from each other about everything including building techniques, pottery making, weaving, medicines and more.
No one knows why but the Puebloan people of Mesa Verde moved south around 1300. They brought everything they knew and believed with them.  Many settled along the Rio Grande in central New Mexico. Today those Puebloan cultures are still there surviving the early Spanish explorers and all of the diseases they brought, the Mexicans, the Catholic missionaries, the western movement of America and the American government.
Their past and present, their history and culture and the people thenselves deserve our respect and understanding. They are the original people of this land and part of our heritage.
Well, lots of rocks and stuff, I know.  One more stop on this part of the journey at Chaco Canyon, another World Heritage Site. This was the center of the widely spread and diversified Puebloan Culture.
More later.
Roger and Susan.