We left the Grand Canyon on 3/23 heading for Monument Valley which is just across the border into southern Utah. The big group of folks from Quebec were a couple days ahead of us so we couldn’t get a spot at Goulding’s Trading Post (and campground and lodge and restaurant and car wash and gas station and grocery store and pizza place and post office and airport). So we stopped at Cameron’s Trading Post (and campground and lodge and gift  shop and restaurant and gas station and post office) at the Little Colorado River heading that way.  Neither location had much of anything else nearby.
Cameron’s had a really nice looking lodge and a interesting restaurant decorated with hand woven Navajo rugs and Navajo art work.  We ate in the dining room and stayed in their minimalist campground. 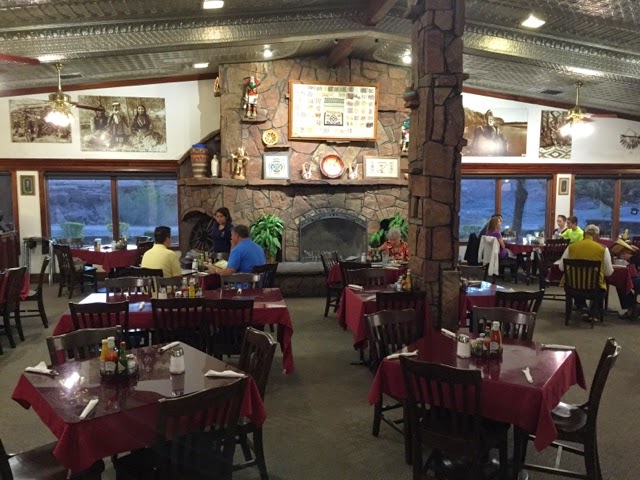 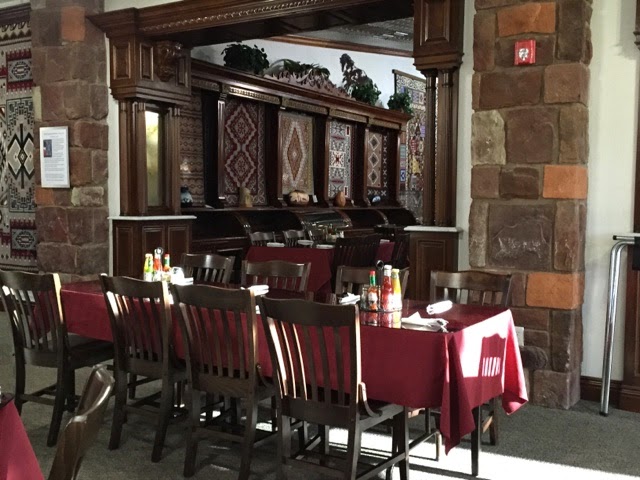 The stone work,  woodwork and art work was impressive. 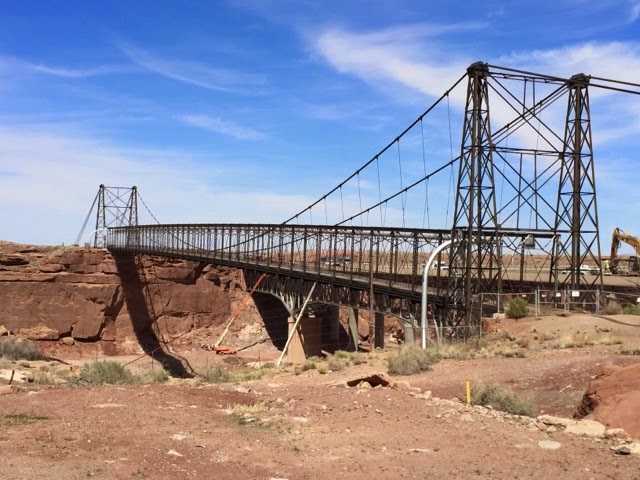 This is the original 1911 suspension bridge across the Little Colorado.  There is a newer bridge on the other side.  The Mormon Trail crosses near here as well.  This bridge swayed and was creaky from day one.  It is a single lane bridge. It has long since been used for a gas pipeline crossing.  A National Historic Site now.
The next day we drove about 50 miles to Goulding’s Campground. The campground was in a narrow canyon whose opening looked out towards Monument Valley. 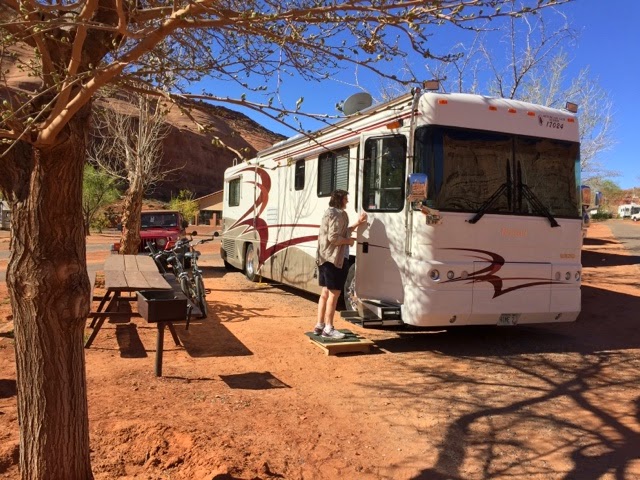 It was mostly dirt, electric OK, water hard, small,short sites and probably the most expensive campground we have ever sayed in, $48/night!  We are averaging about $20/night. 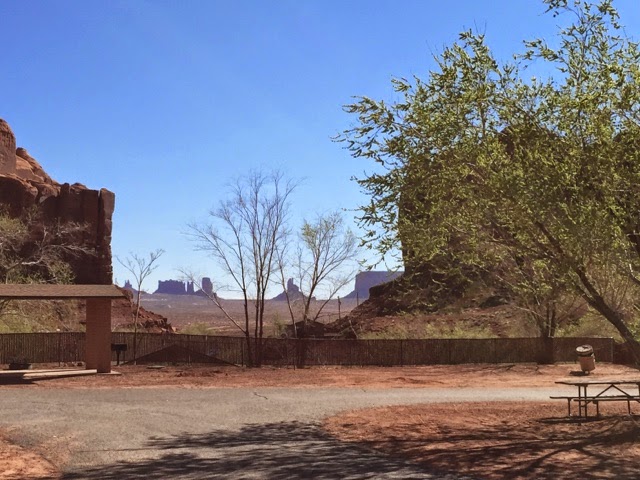 Monument Valley is a Navajo Tribal Park.  It is located in the Navajo Nation as is Goulding’s.  It cost $20 for a four day entrance permit and then you can drive on the one way, rough and dusty road through Monument Valley.  People live in the valley, there is no water anywhere.  They all have water trucks that they fill up at Goulding’s.  Oh, it is a water fill station too.  If you don’t want to drive you can pay $56 or much more to ride around the park in the back of a pickup truck outfitted with seats and have someone tell you what you ware looking at rather than reading the brochure that tells you.  We drove the Jeep.  The main erosive force in the valley is wind.  It was windy there.  And wind erosion uses fine particles to do its work which creates more fine particles.  Monument Valley is covered with a reddish very fine sand.

The Tribal Park has a Visitor’s Center and a Museum.  The museum was mostly about the Tribal system of govenment, the geology and life in the valley. The Visitor’s Center was more about the recent history of the valley in movies.  The Goulding’s arrived in the 1920s and started a small trading post.  They were fair and honest folk and got along well with the Navajo people.  The Great Depression hit the Navajo particularly hard and the Goulding’s as well. They set out for Hollywood with their last $60 to try to convince movie producers that Monument Valley would be a good location for the increasingly popular Western movies. They were persistant and finally met John Ford who looked at their pictures and decided on the spot to shoot his next picture, “Stagecoach”, starring John Wayne in Monument Valley. The Goulding’s got an advance payment for helping to make all of the arrangements, hire extras and to provide services to the movie crews. Goulding’s Lodge soon followed. Dozens of movies have been filmed there.  More recently just scenes. The last movie was the third Transformers film. Lots of adds have been made there too. While this provides revenue to the Navajo Nation and they are able to control use and exploitation of the Valley it does not provide jobs. Production companies today and for a long time bring everything they need with them, all of the equipment and all of the people, even food and cooks and very tight schedules and budgets.  Not much local spending.
Most of the features in Monument Valley are volcanic in origin, lava pushing up into cracks and holes in the ancient sea bed.  All of this was easily eroded leaving just the columns.  Many looked like Devil’s Tower in Wyoming, same geology, even a close encounter with a movie there. 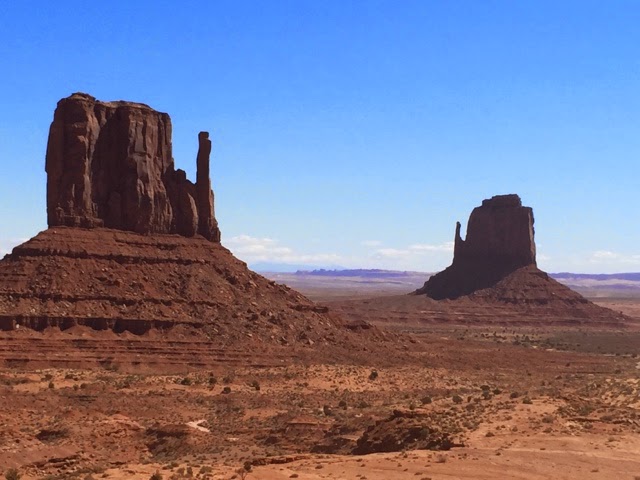 You can just about see the swaggering John Wayne kicking up dust, Pilgrim. These are called The East and West Mittens. 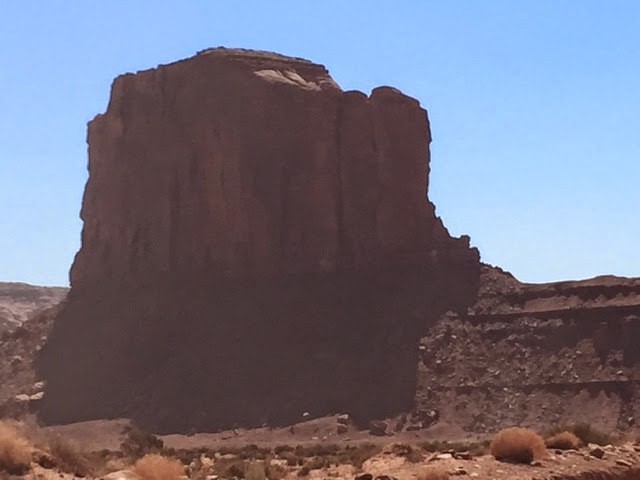 And Elephant Butte, with some imagination.  The other side looked like nothing. 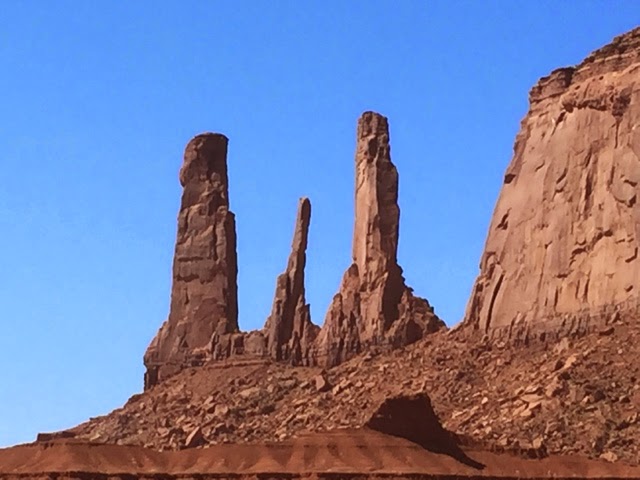 The Sisters.  It is supposed to be a nun and her two students.  We looked but couldn’t see the ruler. 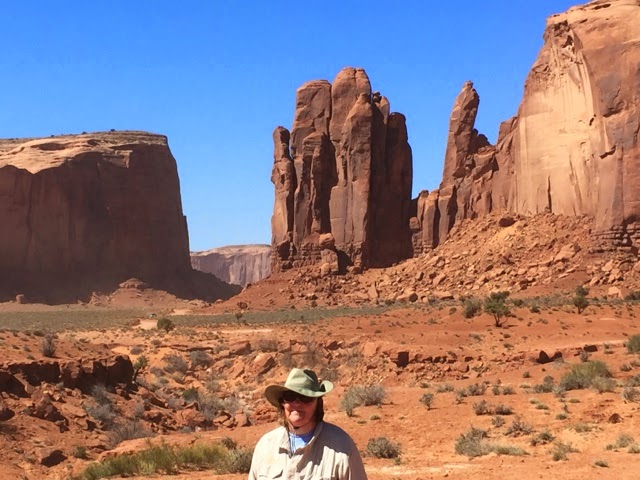 Some of these spires are vary narrow.  There be cowgirls, too. 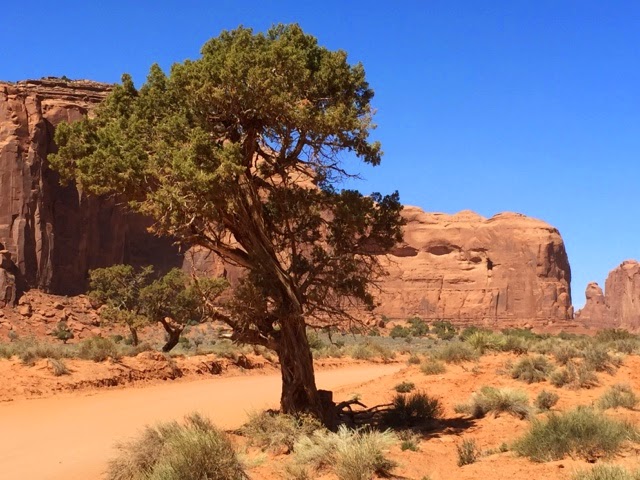 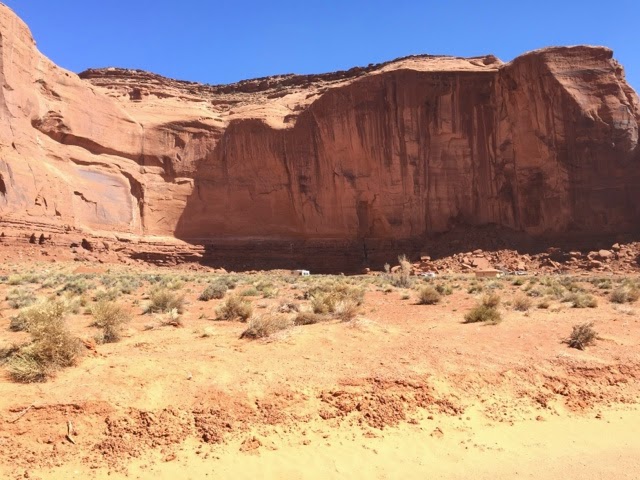 A homestead in the shadow of the cliff. 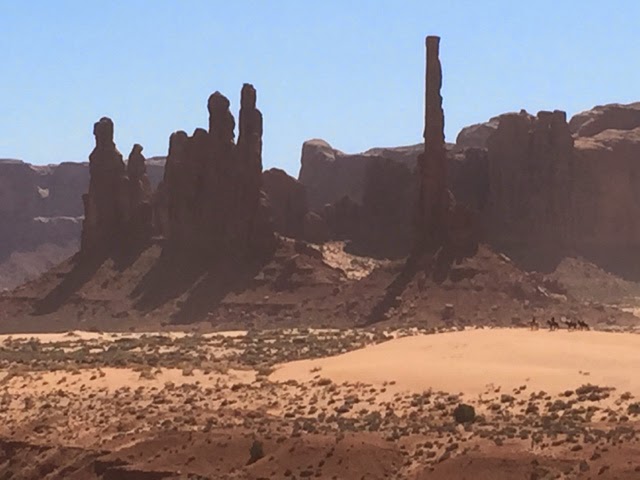 There is a string of horses riding across the dune.  Everything is very big. 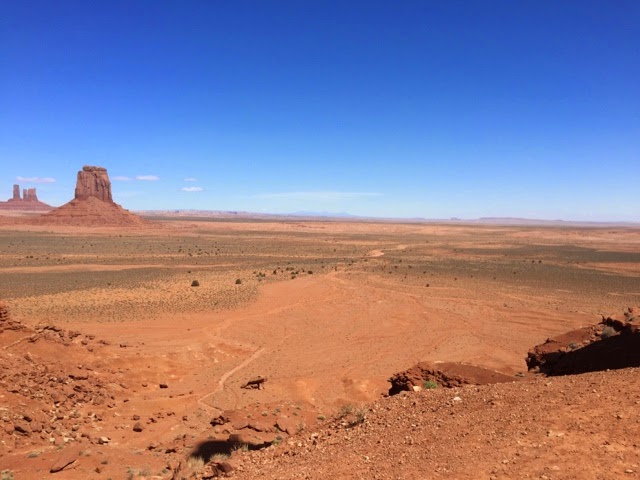 And out towards the north, nothing but dust.

Monument Valley is another one of those places that is almost too big to show in photos.  But being there was very impressive.  Glad we went.
Next Cortez, CO and Mesa Verde.
Until next time,
Roger and Susan