We set aside a day for a bike ride out to the North Kaibab Trailhead.  It was about 3-1/2 miles out on the Greenway Trail.  This is a walking/biking trail that follows along the rim.  Most of the biking allowed trails are back from the rim and lead through the woods.  There are about 20-30 miles of Greenway trails.  You can ride your bike on any of the paved roads as well.  About the only place you can not ride a bike is where there is no trail or on unpaved trails.
We were able to leave directly from the campgound on a connector trail that went by the water strorage tanks for the main South Rim area.  There were five huge steel tanks, 80 – 100 ft in diameter and 25 ft tall.  There is a lot of infrastructure that is hidden from view to support the vast number of people who come to visit the National Park (about 5 million each year).  This trail went to the Visitor’s Center and connected to the trail following the rim to the east.  Like so many ways we went in the park there was something amazing at every turn. It is a treat to be able to take the time to go slow and see these things. Riding bikes is a good way to do this. So is walking. We ran into a couple of significant hills both up and down on the way out to the South Kaibab Trailhead. The upsides were challenging, the downsides were fast but we perservered. 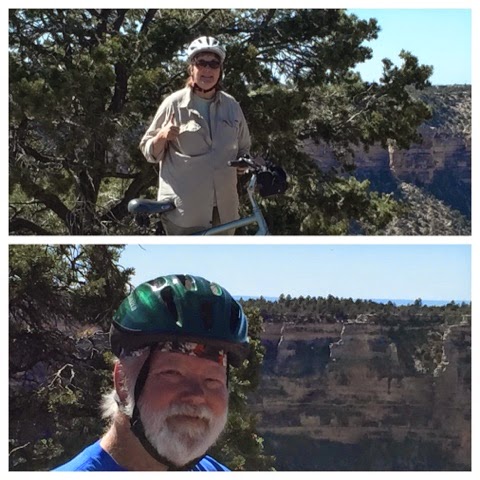 The helmets are very stylish.  On the way out we ran across some elk, wapiti, no horns so they were cows. They were right on the side of the trail, maybe 30 ft away. 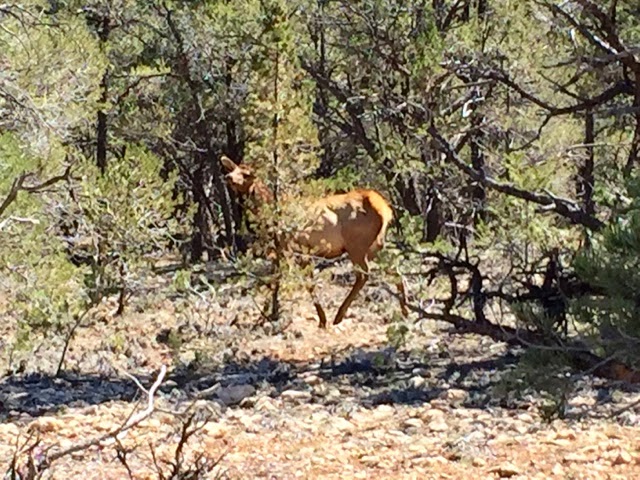 At the trailhead there was a large mule corral and barns.  This is the main departure and return point for mule supply trains to the Phantom Ranch at the bottom of the canyon.  It is also where one and two night overnight mule trips to Phantom Ranch start and end.  These are pretty pricey.  There are similar opportunities from the North Rim.
The main thing to do here is to hike down into the canyon. There is some water and a few rest rooms on the way.  The trailhead is at 7,260 ft. There is a 3 mile round trip that goes down about 1200′.  The estimated time was 3-5 hours.  This is probably the most frequent hike. There are other trips further down that take longer.  Down to the bottom of the canyon at 2,480 ft elevation was over 7 miles, an all day hike one way.
The South Kaibab Trail was built by the NPS in the 1920’s after many years trying to get control of the Bright Angel Trail without success.  The Park Service wanted a public access trail into the canyon.  So the South Kaibab Trail went into the canyon from the south.  The North Kaibab Trail descends from Bright Angel Point on the North Rim where the North Rim Lodge, campground and Visitor’s Center are located.
The two trails meet at a suspension bridge over the Colorado River near the Phantom Ranch. 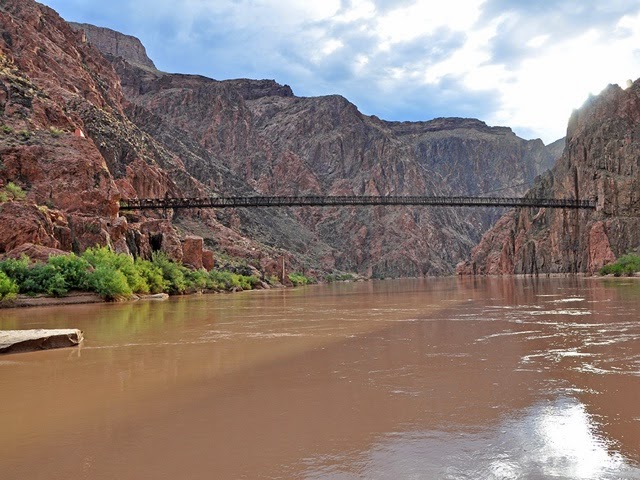 (Another internet picture, thanks to someone) I didn’t actually walk down here.

We could see the trail heading down with people going both ways. 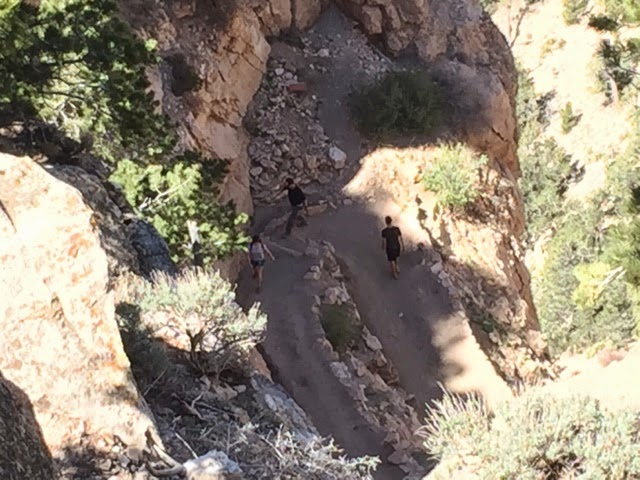 And then up came a mule train. 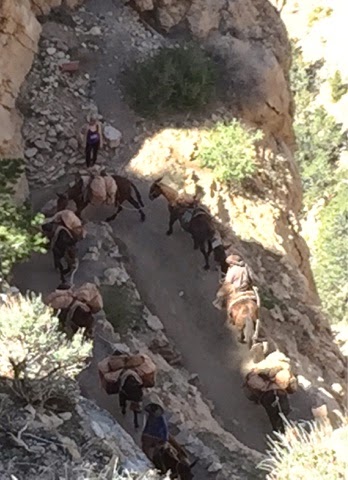 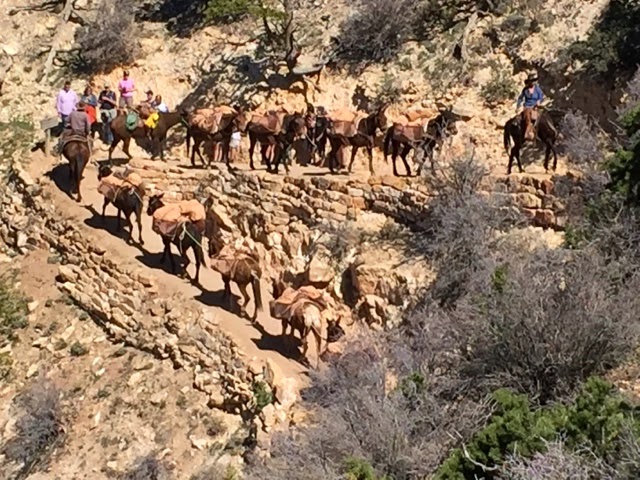 People stand aside.  Mules rule. And they looked like they knew they were near the end of the trail where their loads would be removed and there was water and food .  They were not going to be denied.
I followed the mules back towards the barns where they were being unloaded and there were more elk, about 10 of them, just wandering around.  They seem almost tame but they are not. They are much bigger than deer. 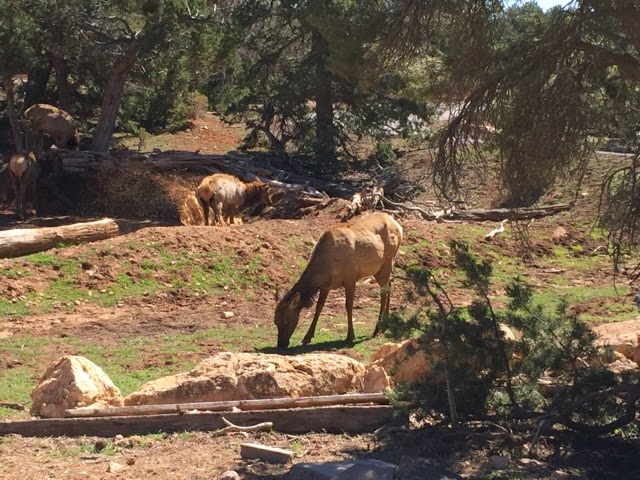 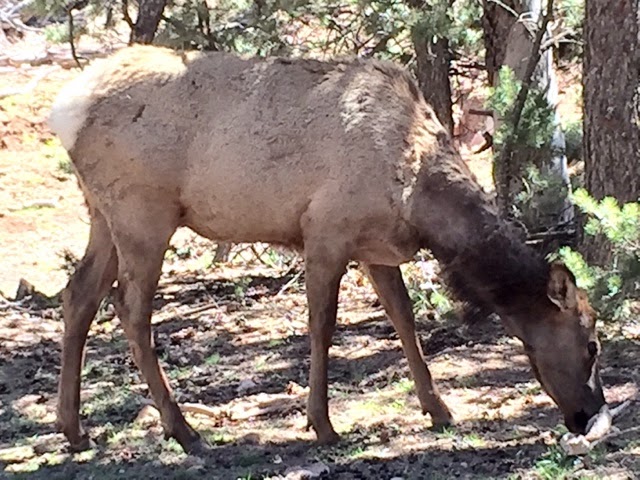 There was a big muddy puddle left over from the snow a few weeks earlier.  One of the elk just flopped over in the puddle for a bit of a “bath”. 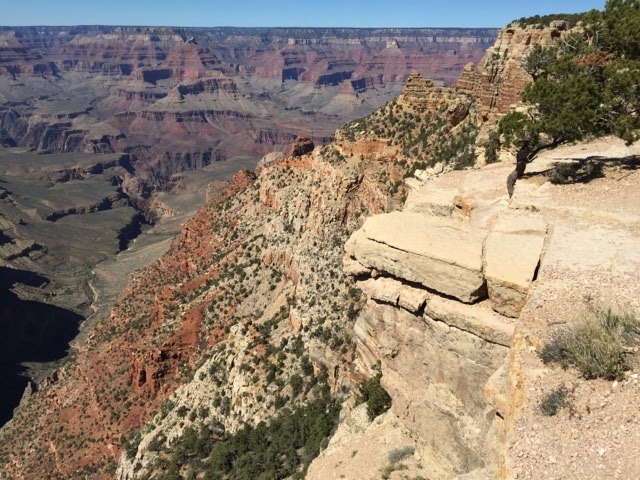 More great views on the way back.  And all of those hills on the trail seemed less challenging and the route much shorter.  Funny how that works. When we got back to the campground there were seven more elk.  We didn’t see any until just the last few days we were there.
And then I ran across this motorhome in the campground.

Pretty neat to see one of these from Hawaii.  We saw one several years ago at the EAA convention in Oshkosh, WI.  We have seen many from Alaska, most every province in Canada, states from Maine to Florida, Washington to California, Minnesota to Texas.  It is clear to us that people are traveling and in every imaginable way.
We have had an RV of one sort or another since 1974 so our days in a tent are long past but after more than 40 years of traveling this way we are hooked.  It is a lifestyle choice, not everyone’s, but ours. Time seems to slow down when you focus on the present and let all of the distractions slide away.
Our days at the Grand Canyon are coming to an end.  We are heading east and north to Monument Valley for a few days.  In all of the times we have been in this area it is a place we have never been to.
We are going to miss the giant Meteor Crater near Winslow, AZ.  Also the site of a great movie, “Starman” with his “Dudeness” Jeff Bridges. One of my favorites.  We saw a public TV show about Route 66 with Billy Connelly.  He visited this site on his cross country motorcycle trip and was very excited to see what every American man wants to see, a really big hole in the ground. 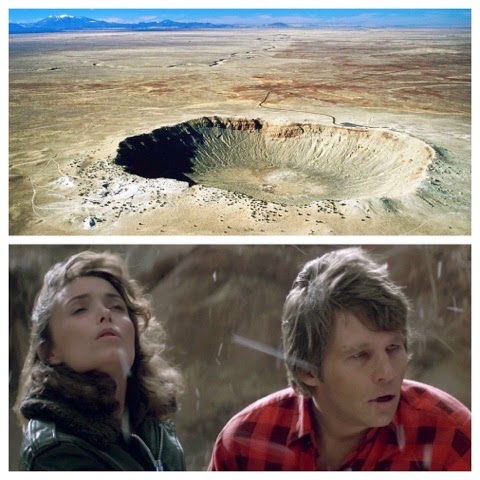