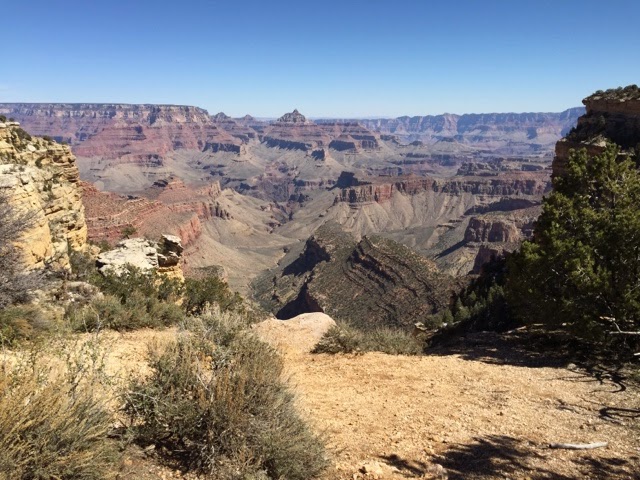 Cape Royal is at the end of the flat plateau on the left side of the horizon.  While we were at Grandview Point we saw two California Condors. They have a wingspan of about 7ft. They were almost extinct thirty years ago but with a captive breeding program there are now more than two hundred Condors living in the canyon. Even still, they are rarely seen and seeing two was pretty amazing. 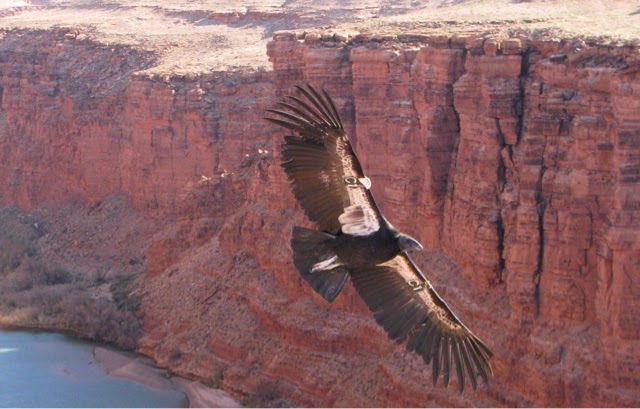 They are very large and easily identified by numbers and colored tags on their wings. I’d like to take credit for this picture but it came from the internet. The distance across the Grand Canyon from Grand View Point to Cape Royal is one of the shortest crossings so this is a great place to watch migrating birds.
Navajo Point was not too much further along toward Desert View. There was still snow on the canyon walls. 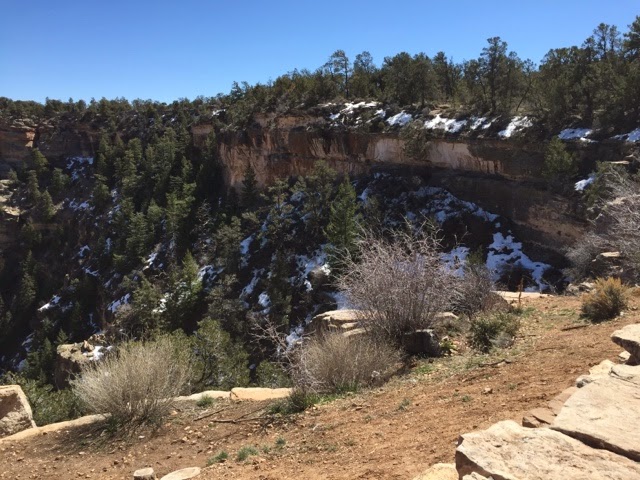 Navajo Point looks out over the site of the worst airline disaster in US history at that time.  On June 30, 1956 a United Airlines DC7 and a TWA Super Constellation collided at 21,000 ft and crashed into the canyon near Temple and Chuar Buttes. All 128 passengers and crew died.  Within a few years Congress established the FAA to improve airline safety.  This area of the Grand Canyon has special protections and restrictions. Remnants are still being discovered.  29 unidentified remains were buried at the Grand Canyon Pioneer Cemetary. 70 passengers from the TWA flight were  buried in a common grave in Flagstaff. The other 29 remains were returned to their homes for burial. 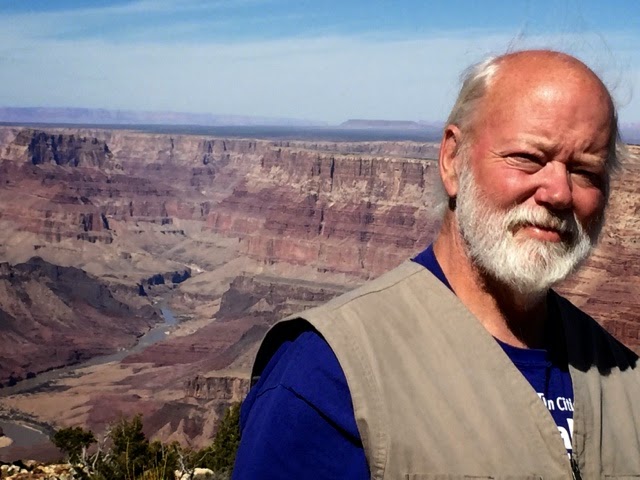 These two Buttes are in the canyon to the left of the river.
Further along we came to the Tusayan Ruins.  These are the remnants of an agricultural pueblo built about 1185AD and occupied for about 20 years. It was a small U shaped pueblo with the open end facing south and the sun.  There were living and storage rooms and a Kiva.  This site was listed on the National Register of Historic sites in 1974.  There are more than a thousand known archeological sites in the Grand Canyon.  Only 5% of canyon has been explored. 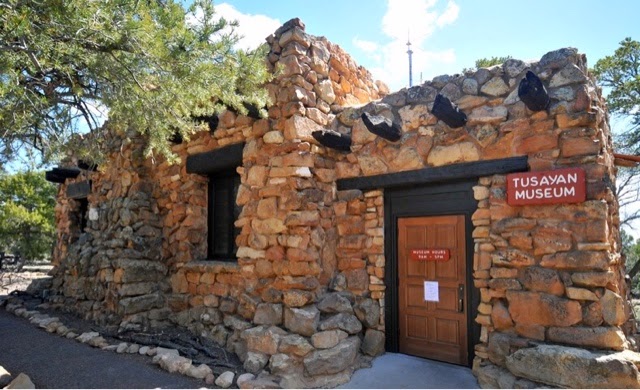 There was an interesting interpretive museum (not an original building) and of course a gift shop.

This building style with stones fit together and mortared with clay and mud is typical of the puebloan building style of this period. How the stones are shaped and fitted together as well at the mortar mix helps date these sites.

There was a path through a wooded area and on to an open area in a small valley where farming would have taken place.  A small stream probably flowed at times through the valley to help with crops. There was evidence of a small dam to hold water. Signs along the trail identified the different plants of today that were likely the same then and how different parts of the plants were used for tools, food, medicine, fibers and building materials.  Weather and plant life was likely similar to what it is today. It is interesting to begin to know and understand life and cultures that were here long before any Europeans  came.
And then on to the Desert View and the Watchtower. The Watchtower is another Mary Colter designed building. While it looks very old it is another early 20th century structure built to look what the designers thought a much older building would have looked like.  The Watchtower has a steel inner framework hidden in the very carefully selected stone work.  The tower has five levels and a stairway to the top. 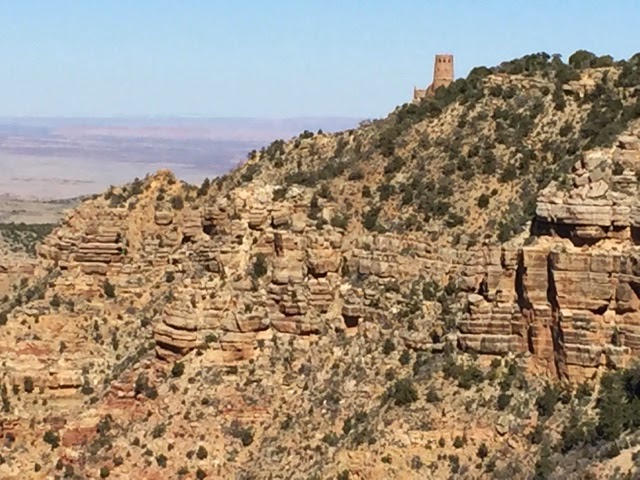 Beyond this area to the east the land flattens out, the desert view. 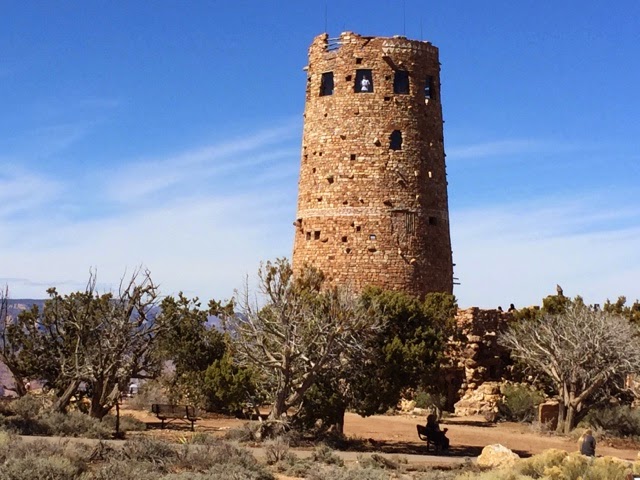 It really isn’t that old but built to look like it.  The inside has extraordinary decoration. 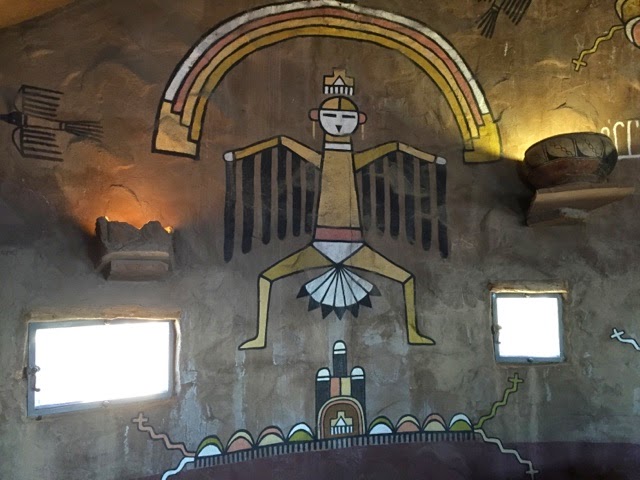 Looking up is even more amazing. 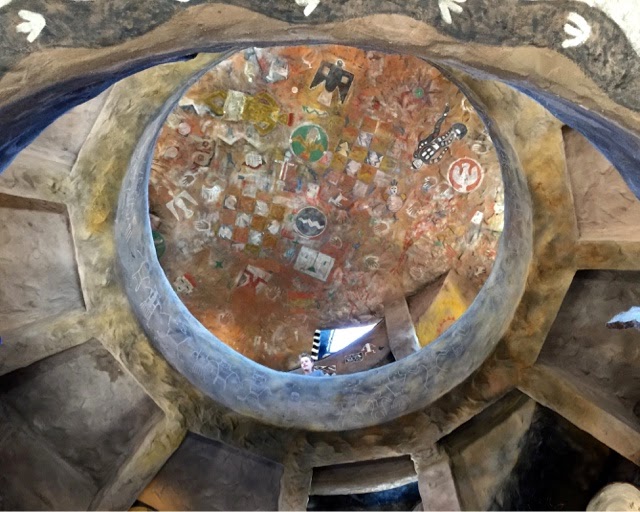 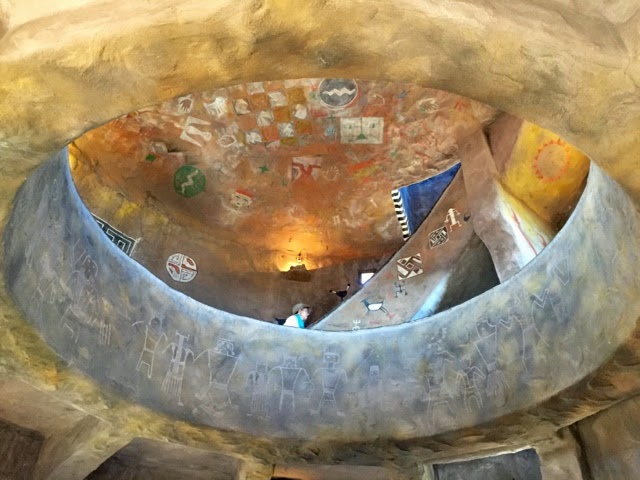 It was really quite stunning. 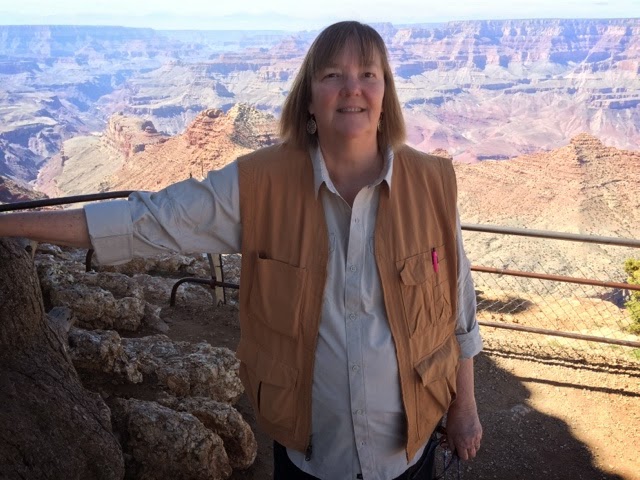 Hanging on, Susan got near a railing. 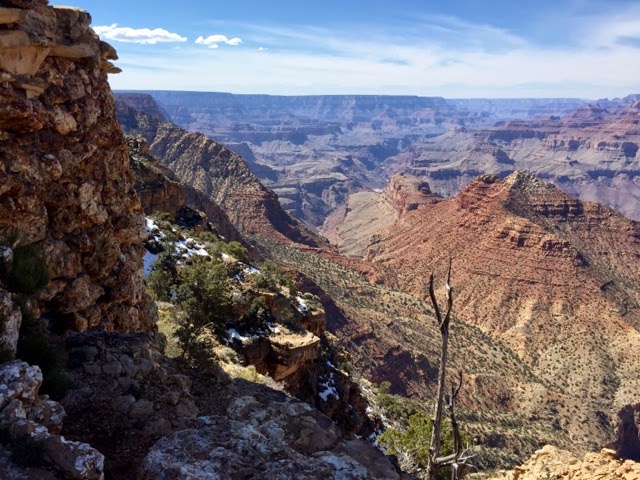 Looking back to the west, the canyon seems to go on forever. 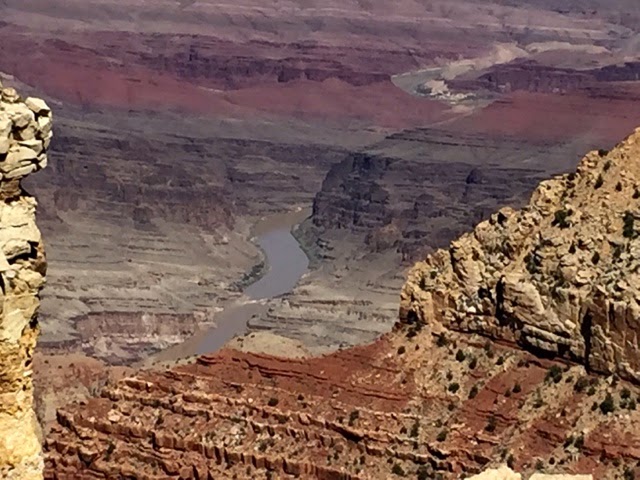 There are many more opportunities to see the river at this end. 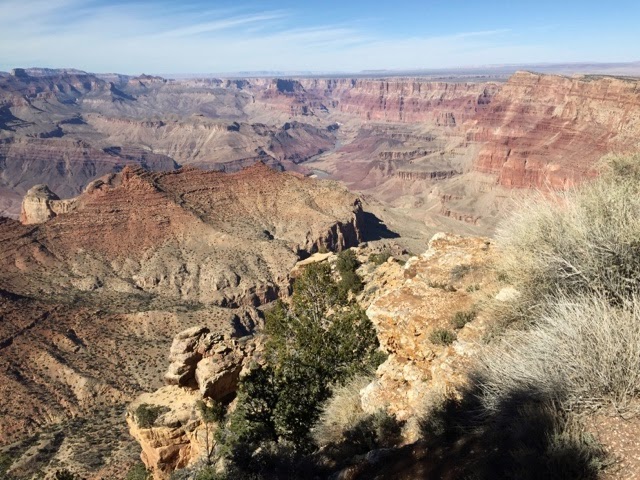 In the Watchtower there were several “ReflectoScopes”.  These are highly polished black mirrors.  When viewing the canyon in these mirrors the colors are said to be much more vivid. 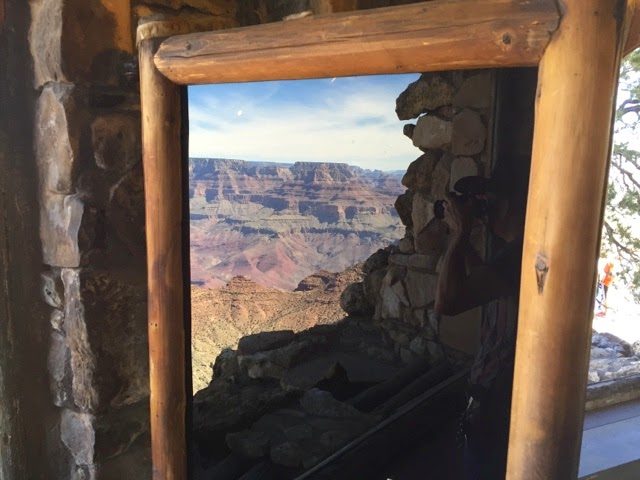 They did have a great look.

This was a great ride, lots to see and learn.  There is a campground at Desert View that is open in the summer.  There was a nice picnic area as well where we ate our lunch.
Another experience at the Grand Canyon that seems special.  Seeing two Condors, learning about a plane crash over the Grand Canyon that was a subject of a Tony Hillerman mystery feturing Jim Chee and Joe Leaphorn and seeing the artistry at the Watchtower.
A couple more days ahead.  We have been riding our bikes on short rides getting used to the 7,000 ft altitude getting ready for a longer ride out to the North Kaibab Trailhead.
More later.
Roger and Susan