Hermit’s Rest is another Mary Colter designed Grand Canyon building which also include the Lookout, the Watchtower and the Hopi House. It was built in 1914 at the west end of the Rim Trail for the Fred Harvey Company and is meant to look old and natural. The original hermit, Louis Boucher, staked claims in the canyon in 1891 below this point and carved the Hermit Trail down to where he lived alone at Dripping Springs and eventually further down to the bottom of the canyon. The Hermit’s Rest was a way station and rest stop for horse drawn stage coaches on their way to a Fred Harvey camp called Hermit’s Camp. The camp has vanished with time but Hermit’s Rest remains and is a National Historic Landmark.
This was a bus ride that took about an hour round trip.  It was much longer if you got off to see the canyon from all of the stops it made.  And every stop was worth getting off and just being there for a while. This ended up being an all day event for us. 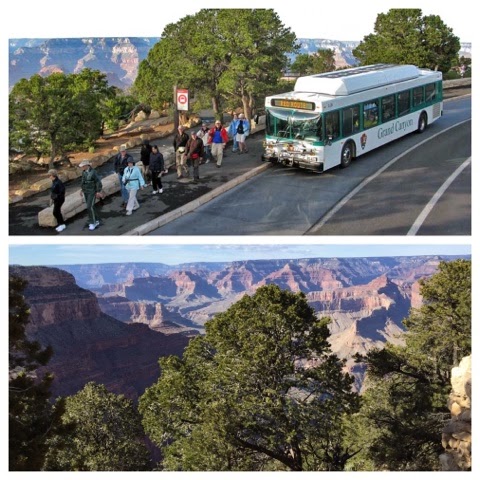 The views are amazing. Different times of the day make everything look different. One day was overcast and I thought it made the deep canyon more vivid.

Susan started out not wanting to get anywhere near the edge. As the days went on she got a bit better and with some hand holding, she got pretty close. 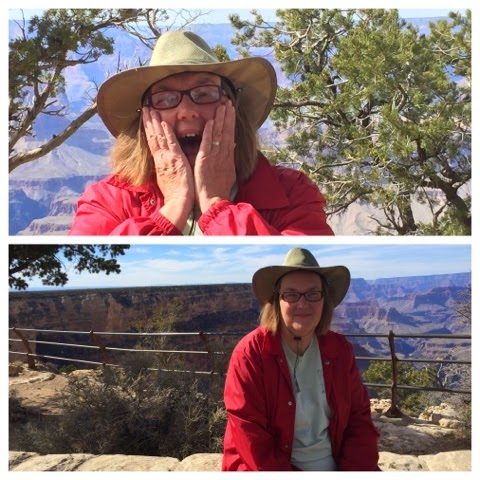 Hermit’s Rest is announced with an archway with a bell. 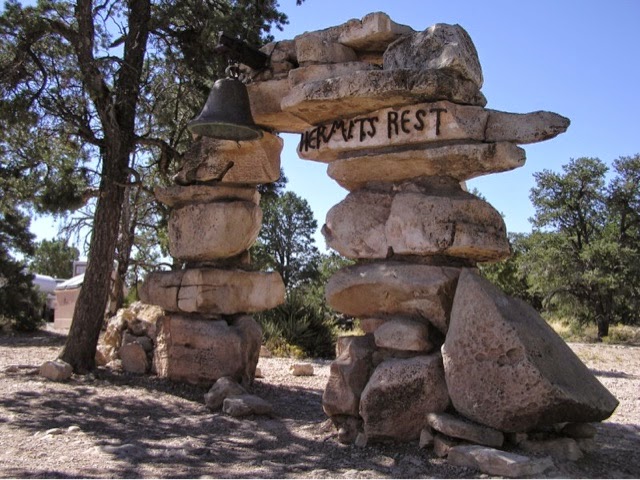 Fitting to the influence of the railroad the bell is hung from a piece of railroad rail. It was rung to call the resting stagecoach passengers back to finish their ride to the Hermit’s Camp. 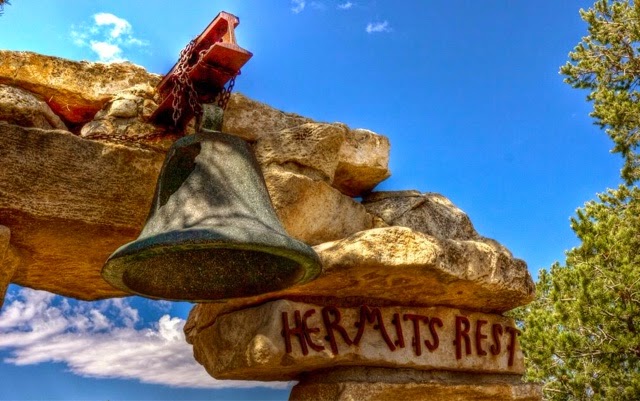 Down the path towards the canyon rim to the Hermit’s Rest itself. 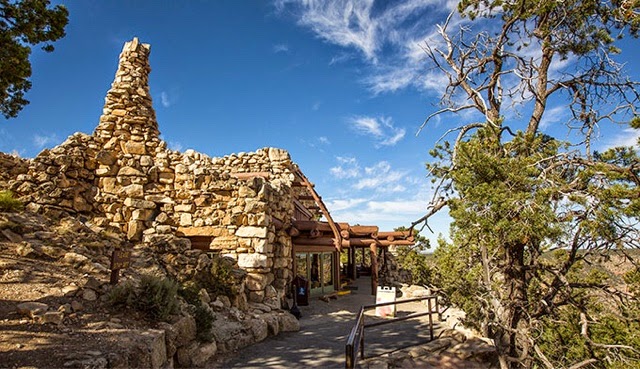 There was a large welcoming fireplace of an interesting design.  Sort of a 1/4 sphere. No marshmallows today. 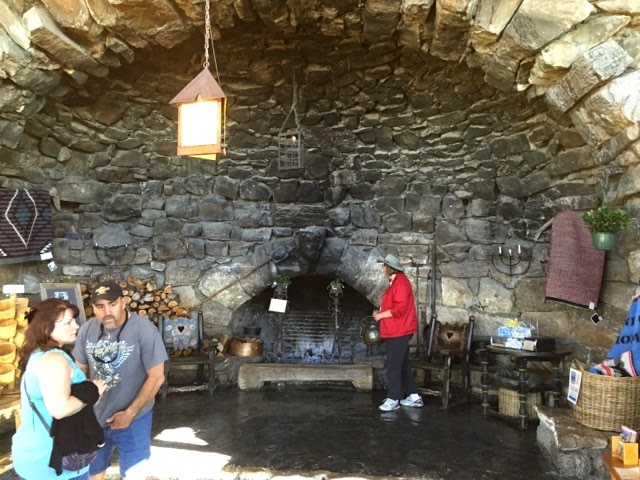 Can you guess what else is here today?  Why gifts and souveniers and a snack shop.  Susan got some hot chocolate, I had a great cup of coffee.  There were some very nice matted photos that we thought were nice. The matting was especially unique. We thought they would be at another shop so we didn’t buy anything.  We never saw them again so we made a return trip to the Hermit’s Rest to reconsider. They are very nice.

Some of the best canyon views were on this part of the Rim Trail. Deep side canyons everywhere, many with remnants of the 2 feet of snow they got here about two weeks before we arrived.
Almost every area not facing the sun all day had some snow left. 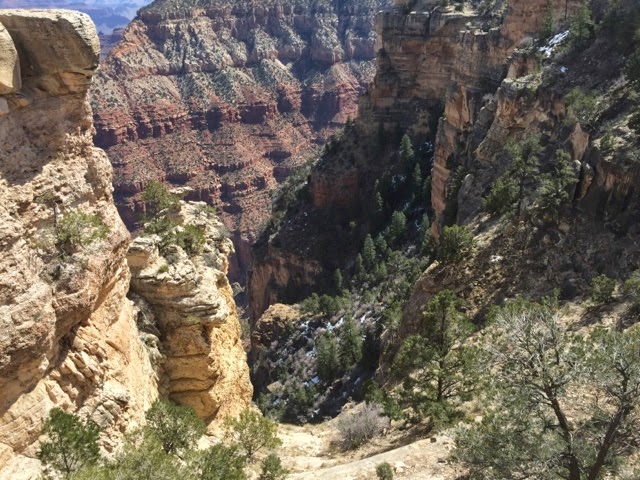 It is hard to describe or even show in pictures the scale of the Grand Canyon. This is one place I just barely wish I had a more capable camera (beyond my iPhone).  The range of light levels is huge and one part of the picture will be ok and another underexposed or overexposed.  In this grandeuer it is hard sometimes to get it right. 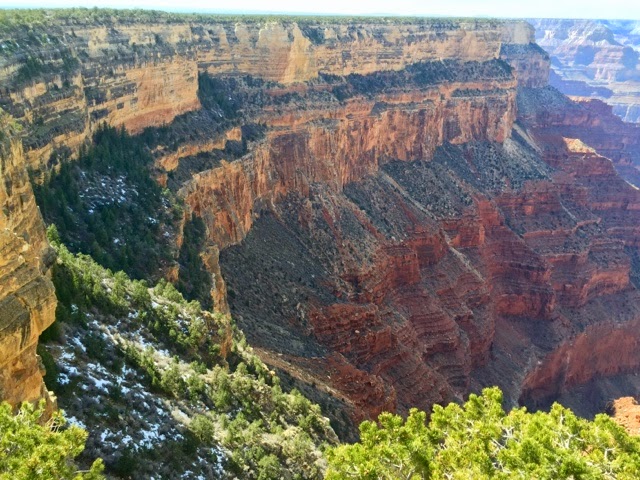 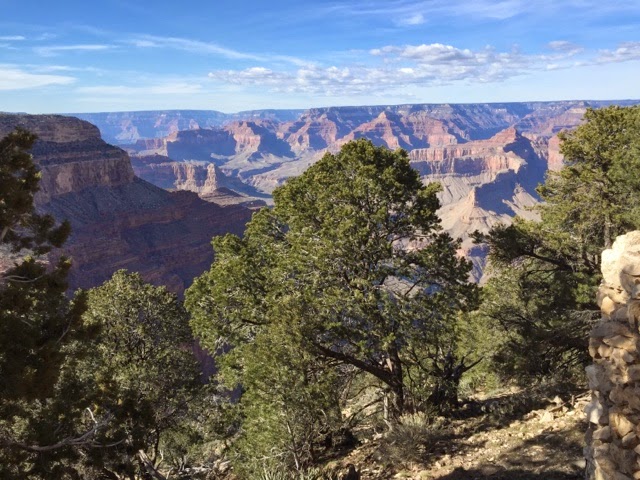 We went to a Ranger program one day where she talked about Grand Canyon Geology. We like to go to these because there is so much to learn if you are interested.

The bottom layer of rock is called the Basement Rocks and consists of several layers of very hard basalt and granite. These were formed 2-1/2 billion years ago as tectonic plates collided and pushed over and under each other.  (By the way, the exposed rock on much of the North Shore of Lake Superior in Minnesota is 4-1/2 billion years old, some of the oldest know rock on the planet!) All of this slowly cooled and sank.  Over the next billion and a half years, give or take a week or two, this area was covered by oceans, layers thousands of feet thick were deposited and rock formed. Oceans retreated and returned over and over this entire area laying down all of the different layers one sees today.  The layers can be carbon dated so scientists know the age of each layer.  There is one discontinuity between layers where a million years or so is missing.  That entire layer was deposited and then eroded before the next layer was formed.
After all of this deposition came uplift.  The entire Colorado Plateau was lifted up by forces deep in the earth.  And rather than being folded and broken the entire plateau was lifted evenly.  That is why the horizontal lines of the canyon are so uniform.  All the while this uplift was occuring over millions of years the Colorado River flowed through this area.  Water and sand and rocks began carving down into the layers.  Water flowed in from the sides making side canyons bigger and deeper.  More and more silt, gravel, rocks and boulders added to the force of the water to grind away at the canyon.  There were no dams so this was an enormous erosion event.  All of this happened long before the glaciers.
But there were dams.  Scientists think that between 40,000 and 1.5 million years ago at least 13 lava dams have blocked the flow of the river.  These took from just a few days to form to thousands of years to finally block the river.  There is evidence that some of these dams backed the river up as far as Moab, UT.  The river and erosion always win out and over tens of thousands of years all of these dams were breached and the canyon got deeper and wider.
The Ranger described the river flow in this way. Even with the dams on the river today and the flow managed the river is about 300 ft wide at the bottom of the canyon. A basket ball is about one cubic foot in size. Normal water flow at any point in the canyon is about 13,000 cubic feet per second. That is a lot of basketballs going by every second. Since the dams have been built the flow has been as high as 30,000 cubic feet per second. Before the dams were built the spring melt brought measured flows of more than 300,000 cubic feet per second.
She also told us that where we sat on the canyon rim was 2-3,000 feet below the surface of the Colorado Plateau when the big uplift began.  All of that rock, everywhere for hundreds of miles in every direction has been eroded by wind and water over millions of years.  So even though the Grand Canyon is a mile deep today it has actually been carved through a mile and a half of rock to get where it is now.
So the geology story is interesting, the people story is interesting, the story of the ancient puebloan cultures and their predecessors that have lived in this area since about 14,000 AD is interesting, the plants, trees and animals are interesting as well as the visitors who come to see it today, they are interesting too.
Our blog readers are interesting too, your comments and feedback is always welcome.
So that was Hermit’s Rest and a bit of geology jibber jabber.
Next up is The Watchtower at the far end of the organised part of the Grand Canyon.
Roger and Susan