This is the first of what I expect will be four posts on the Grand Canyon. This is the fourth attempt at the first. Google Blogger, well you probably know what I think of this app.
We took over 400 pictures while we were there. Internet access was not good. After we left if has been almost nonexistant for about four days while we were at Monument Valley.
_______________________
Susan and I were here on the South Rim of the Grand Canyon in November, 1980.  We were traveling in our camper van and were there for Susan’s Birthday.  I made her a two layer marble cake on the stove top, one layer at a time in the frying pan of our cook set.  Frosted it too.  She made me a carrot cake on this trip with frosting.  Very good.
Back then we stayed in Mather Campground. It looked like this now and the same back then. Our camper then was only 22′ long and would fit in Mather’s 30′ length limit. Mather has over 300 campsites in several loops. They all have a parking space, a fire ring, a table and a grill. Water and restrooms are nearby. Showers and a laundry are at the entrance to the campground.  It is basic but really pretty nice. We did notice that well over half of the camp sites have been changed from pull-in or back-in parking spots to a short drive-through off the main loop road. I’m not sure of the idea behind this but it probably has to do with changes in the way people and families travel and camp in the park.  About 1/3 of the Mather Campground visits are in one form of RV or another.  We were very surprised to see as many rental RVs as we did. 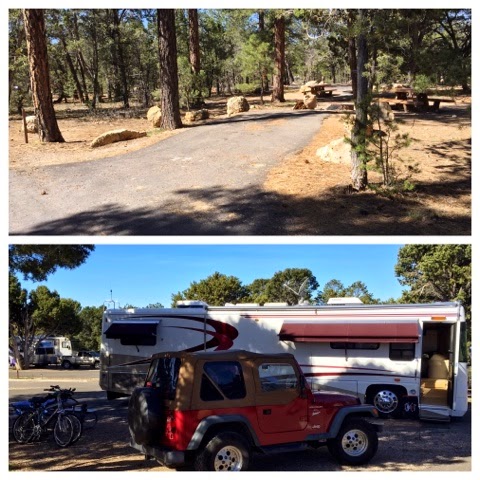 Since our coach is 36 ft long the only option in the park was the Trailer Village RV campground.  It has 84 full hookup sites.  Our site was quite spacious and had trees.  Very nice for our 10 day stay.
We noticed that everyday a significant population in the campground left and was replaced by new folks. I had a chance to talk to a campground person one day and she told me that the average stay at the Grand Canyon campgrounds was less than three nights. The average visit is even less with many people not even staying overnight. It seems like it is hardly enough time to see anything in any detail.
There was a group of 22 RVs there from Quebec. They were there for about five days traveling together as part of an organized tour that lasted three months. As soon as they left they were replaced by the other half of the group, another 20 RVs following behind. The RV campground is 100% full almost all year round. Mather at this time was about 75% full but it too is 100% full most of the year.  Reservations are required especially since it is 60 miles to Williams going south and 75 miles to Cameron to the east.
There is a Market Place area near the campgrounds. It has a bus transfer point, a full grocery store with a large section of camping supplies and a gift shop, a cafe, a US Post Office and a bank.  The Yavapai Lodge is also located there. There are about 3,000 full time residents in the park. They are the National Park Service people and all of the contractors who make the park function.
We met a young family from British Columbia in the campground. Their kids had a week off for spring break so 9 days to travel. They drove from BC to the Grand Canyon, stayed for two nights, then went to Monument Valley for one night and then were driving home.
Grand Canyon NP has a shuttle bus system, three routes, that are free.  They run from Hermit’s Rest on the west end to Yaki Point on the east end. At least 30 miles from one end to the other. You can get off and on at any stop and transfer from one line to another at transfer stations. They run every 10-15 minutes from 4:30 AM until one hour after sunset. There are bus stops at both campgrounds.
We used the buses to go to Hermit’s Rest since it was a 16 mile walk or ride. A bus ride seemed appropriate. We rode our bikes east to the South Kaibab Trail Head about 4 miles along a nice paved bike trail along the canyon rim. 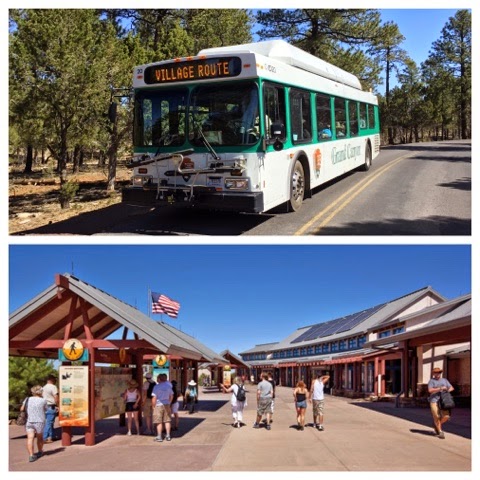 The Visitor’s Center was only a 15-20 minute walk through the woods on a nice trail.  Most days we walked well over 10,000 steps. The Visitor’s Center had lots about the Grand Canyon history, geology, animal and plant life.  There was a theater with a short introduction film. Rangers were on hand to answer any question. Maps, of course were readily available. In the Visitor’s Center Complex there was a bike rental shop, a cafe, a book shop and a big gift shop run by the Grand Canyon Association. There is a gift shop every where you go. It appears that going shopping in the gift/souvenir/book shops was as or more important for many visitors as actually seeing the canyon or anything else in the park. 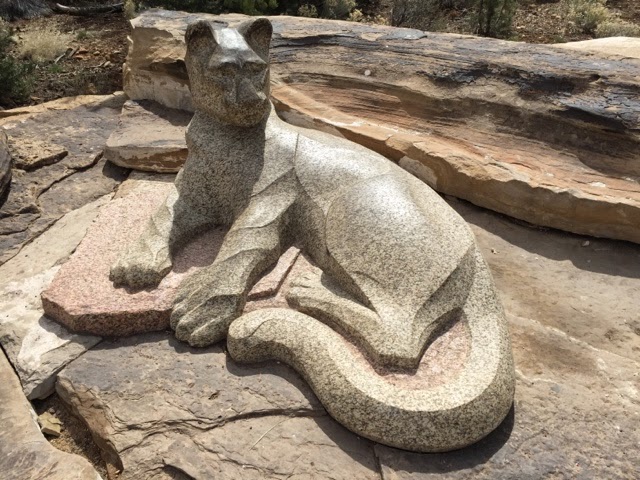 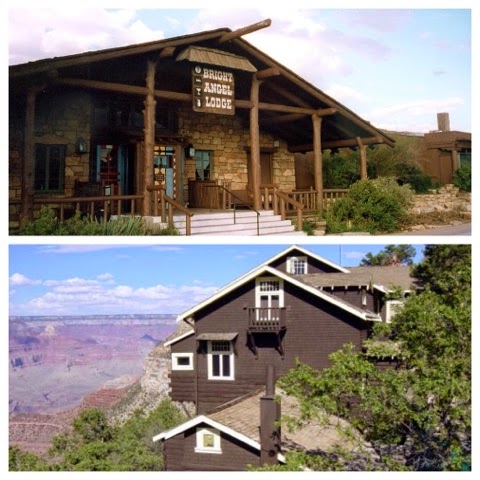 Really, the Kolb Brothers Studio hangs over the edge, way over the edge.
Transportation options back then were mules (horse+donkey=mule), the train or a long stage coach ride from Flagstaff or Williams. 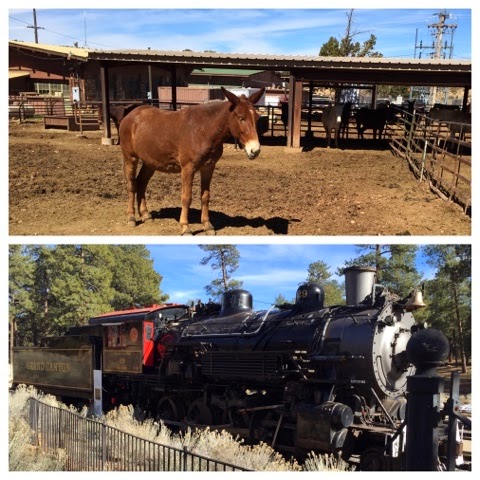 The mules are still in use for a mule ride along the rim from the mule barn near the Bright Angel Lodge. You can also get a mule ride into the Canyon from the South Kaibab trail head for a one or two night stay at the Phantom Ranch near the Colorado River at the bottom of the canyon. A one night stay is almost $600/person. Add another $200 for the extra night.
The train comes up everyday from Williams full of people who get about 5-1/2 hours to experience the Grand Canyon, get some lunch, go shopping in the five or six shopping experiences in the Village and get back on the train headed for Williams in the afternoon. The cheap seats started about $190 the best seats were several hundred.
The Bright Angel Lodge was originally operated by the Fred Harvey Company.  Remember the Demming, NM post? The Harvey Company operated dozens of hotels across the west. Harvey hired Mary Colter, a school teacher from St Paul MN to design buildings and hotels in many National Parks.  She also designed  furniture and dishes for Harvey and for the Santa Fe Rail Road.  In the Grand Canyon she designed the Hermit’s Rest and the Watchtower.
In the old days you had to get dressed up and behave yourself.

Susan and I behaved ourselves so we had lunch at the Bright Angel Lodge.  It was very good so we went back for a second time.  We don’t eat out often but a nice lunch means a nice soup supper. 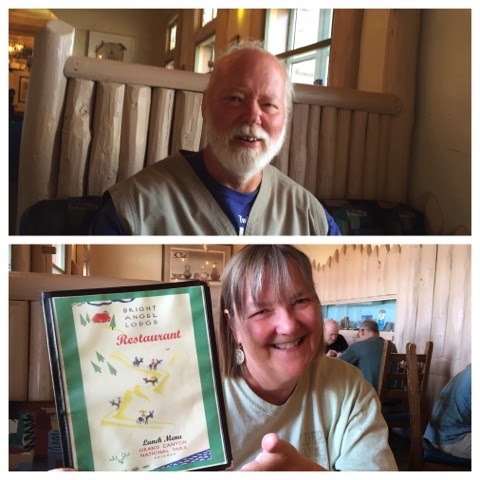 After lunch we wandered through the gift shop, of course.  They have a nice history room too and a big fireplace. 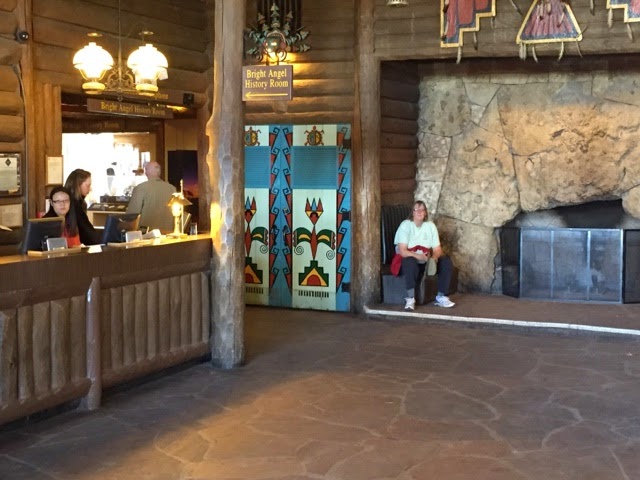 Towards the East along the rim are two more lodges, the Thunderbird and the Katchina.  These have that 60’s look.  But get a room on the rim side and you would have a pretty good view.  A bit further away from the rim is the Mazwick Lodge.  There is a central building with several different cafe, cafeteria and dining room options.  The 250 rooms are in 18 two story buildings.  This is more oriented towards families.  The rooms can be for two or many more. Many are big enough for a whole family.  Rooms for two ran $120-$200 per night.  That made out $36/night in the RV park seem cheap.
And then there is the Grand Canyon grand daddy of lodges, the El Tovar Lodge, built in 1905, originally a railroad hotel owned and operated by the Fred Harvey Company. They were busy putting on a new roof. A lot of maintenance goes on at this time of the year in preparation for the nearly five million visitors each year, most come in the summer. Of course there is a gift shop. 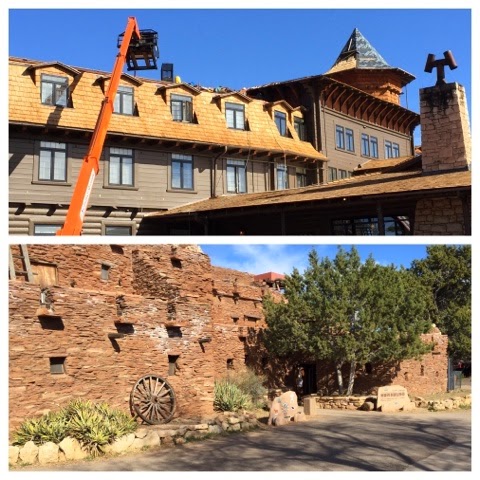 And the the Hopi House, another vintage building which is now operated by a Native American concession selling Native American art and of course all of the same stuff as all the other gift stores. It had very low doors and a very appealing mix of art work, some T-shirts that were only available there and people who seemed to actually know something about what they had to offer. 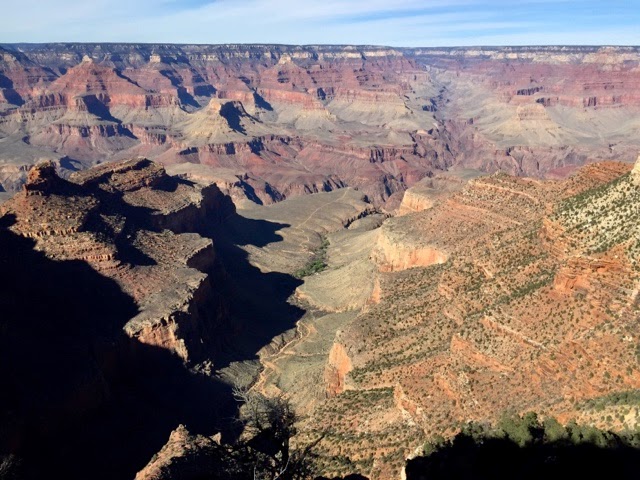 Looking over the rim you could see the Bright Angel Trail heading down into the canyon.  A side trail heads out on a plateau to an overlook. The Bright Angel Trail meets up at the very bottom of the canyon with the South Kiabab trail, a bridge that crosses the Colorado, and then the North Kiabab trail that leads up the canyon in the distance to the North Rim.  The Lodge on the North Rim can be seen on the other side (with binoculars).  It is about 12 miles as the crow flies, 22 miles by the trail, one vertical mile down and one vertical mile up.  It is a two day hike even for experienced hikers. 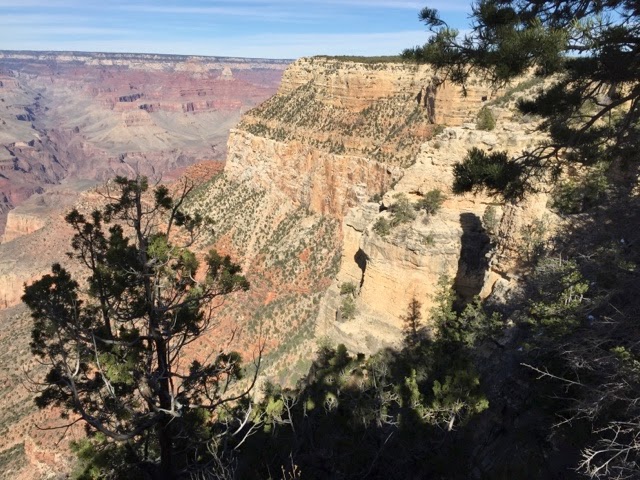 Every turn is another view.  Every moment is the same thing only different.  Light, color, shadow and clouds make it an ever changing experience.
We had the opportunity to be here for 10 days, to walk, ride the bus, ride our bikes, just sit and watch and to see for ourselves those amazing views that perhaps only we saw from where we were at that instant in time.  I often thought of those folks who were only there for a day or two.  They would jump out of the bus, look for five minutes and get back on the bus. It reminds Susan and I of why we like traveling this way. Together, at our pace savoring the time we are blessed with.
More later.  Wow, I think I am going to get this post done without another visit from the Google Gremlins.
Well, no I didn’t.  I went back for one last editorial pass this morning and the entire post was gone again. This cloud thing and being dependent on internet access is not as wonderful as people think it is.
Roger and Susan.