Skip to content
Part 4, Art and Museums continued.
Up on Museum Hill we visited The Museum of International Folk Art. This is mainly one person’s collection of folk art from around the world gathered on his travels.  There is something about collecting hundreds of thousands of folk art things that would make all of those museum gift shops happy. I think you would have to be a little off plumb to be so compulsive a collector.  One interesting feature of this museum is that the collection is displayed in every direction.  There is plenty at eye level and then things near the floor, high up on walls and on the ceiling. There are dozens of diorama like displays and then on the back side, a small opening to look in on them from an unexpected angle 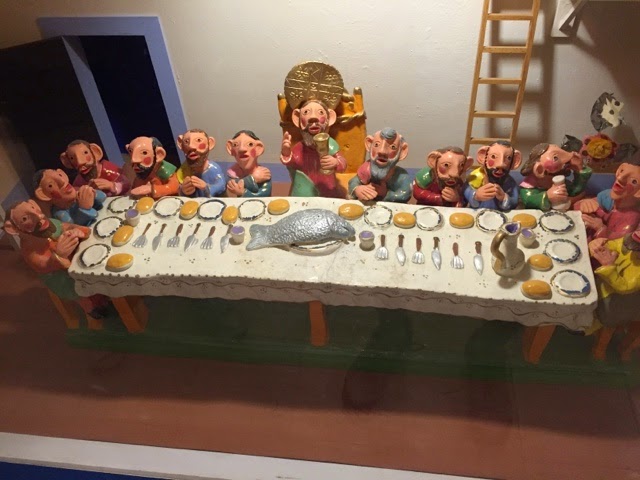 A last supper sort of thing. 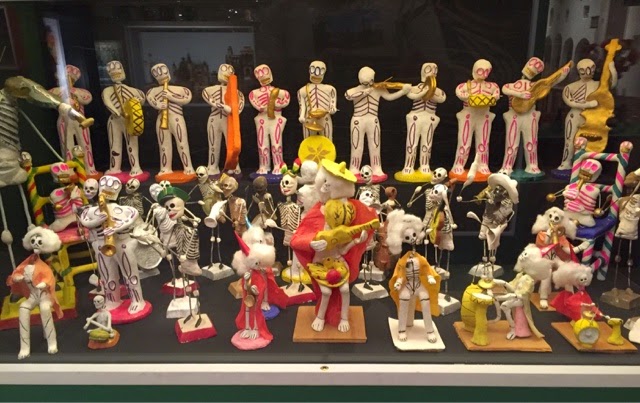 A Day of the Dead band? 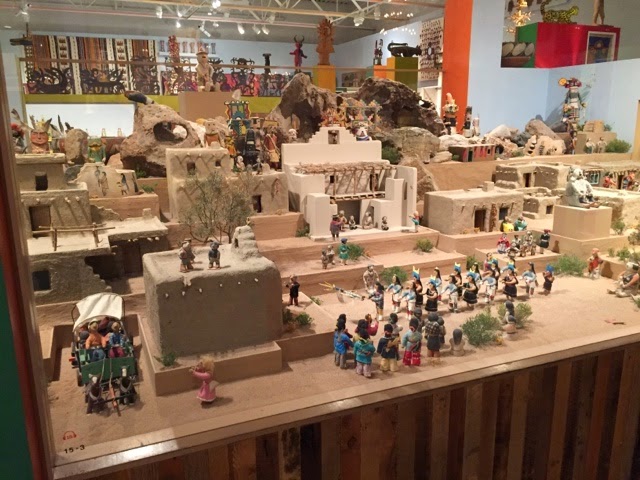 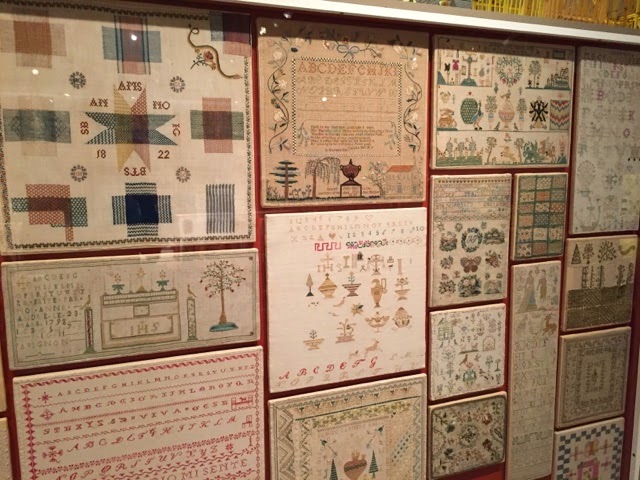 And hand done Samplers from the 1700’s and 1800’s.
Also on the Hill is The Museum of Indian Art and Culture.  This was a wonderful place.  There was a pottery section that described the many different techniques for making and decorating pottery not only from different groups but also families within a tribe.  There was a section on jewelry as an art and turquoise as a material, how it was formed and how where it was formed changes its look and color and how those can be used to date and grade stones.  There was a section on Native music and music making instruments.  Lots more than just drums.  And a section on clothing.  There were dresses, moccasins, leggings, war shirts and ceremonial wear.  And paintings and lots of sculpture from very small icons to monumental sculptures outside in the sculpture gardens. 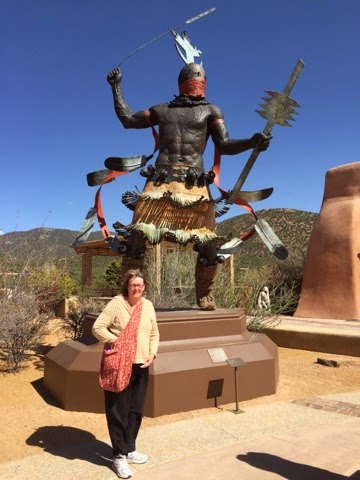 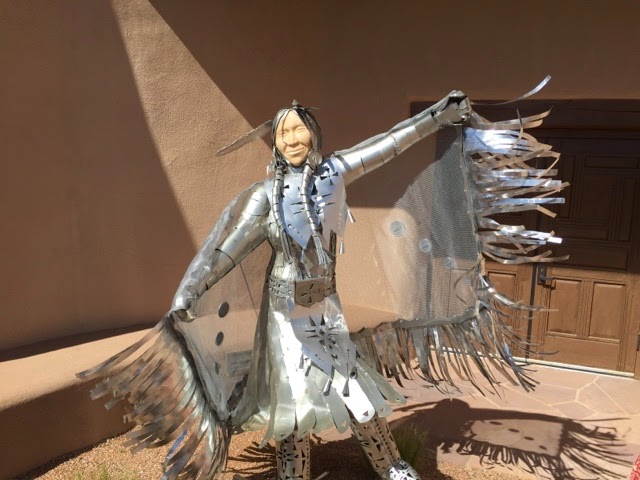 The metal fringe on this sculpture moved in the wind. 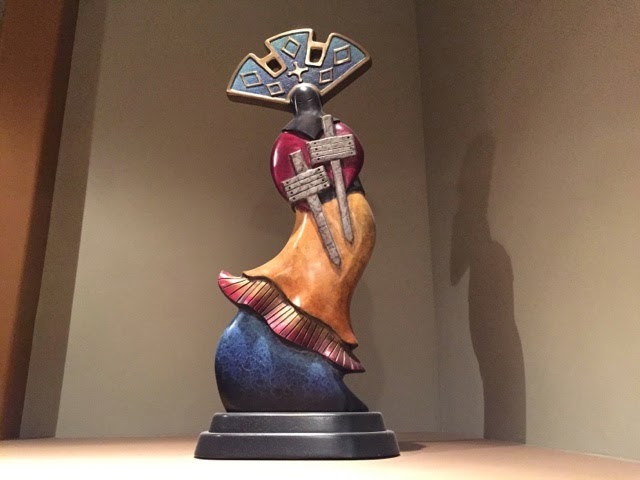 Another museum on the Hill is the Wheelwright Museum.  It is the legacy of an unmarried only child of a very wealthy Boston family who came to appreciate the SW Native American culture and religion and sought to collect and preserve the religious and ceremonial aspects that were closely guarded and passed down by example and oral history.  And as the native population was decreasing there was concern they would be lost.  She collaborated with a Navajo man who knew many of these ceremonial and ritual traditions and shared her concerns and put aside the protective traditions to help her preserve them.  This is a small museum, mostly showcasing one artist at a time.  The display in the main gallery now is a photographic journey of the artist from discovering the post nuclear age impact on his people through their struggle to survive and into a new sense of hope for the future.  Navajo Indians were used to mine raw uranium for the Manhattan Project. The had almost nothing in the way of protective gear and almost all of them suffered from the dust and radioactive residue that clung to them both inside and out. It was decades before any help was made available to those made sick doing this work for the war effort.
We also went up to Los Alamos with our friends, Ed and Barb to see the Los Alamos History Museum and the Bradbury Science Museum.  The History Museum was very interesting, it covered the period from when that area was a private ranch school for boys from wealthy families to the start of the Manhattan Project and the growth of Los Alamos.  There was quite a bit about life in Los Alamos during the war and the period after.  This was a secret place during the war.  People would arrive through a store front in Santa Fe, get their credentials, leave through the back door for a four to five hour ride through some rough terrain to the main gate.  Once past the main gate most never left until after the war.  Mail was carefully censored in a way to prevent anyone from knowing it was censored.  If the censors didn’t like something they would send it back to the sender with instructions how to fix it. There were men and women there as well as babies.  Birth certificates of babies born in Los Alamos during the war give a PO box number in Santa Fe as the address of their birth place.
The Bradbury Science Museum was more about the Science Lab today.  There was a section on the kinds of problems they had to solve to make nuclear weapons but most of this museum is devoted to things that have been done since the war. The development and advances in super computers and programming and the medical advances that have been made.
Everywhere you look there is something interesting. 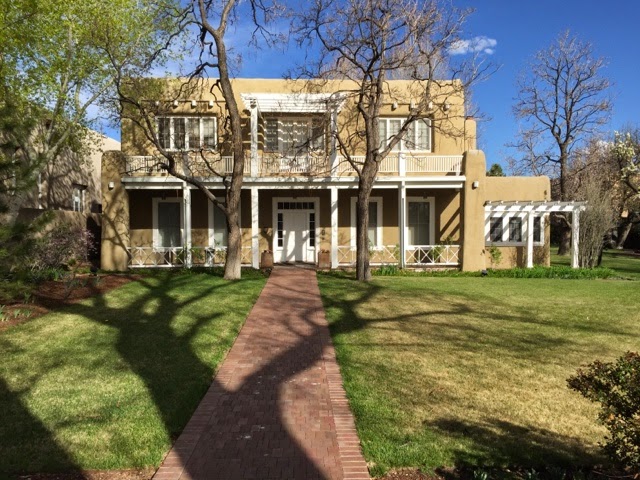 This is the Research Office for the Georgia O’Keefe Museum.  It was originally an Army Officers quarters in the 1800’s, remodeled to the Territorial Style late in the 1800’s and back to this look in the mid 1900’s. 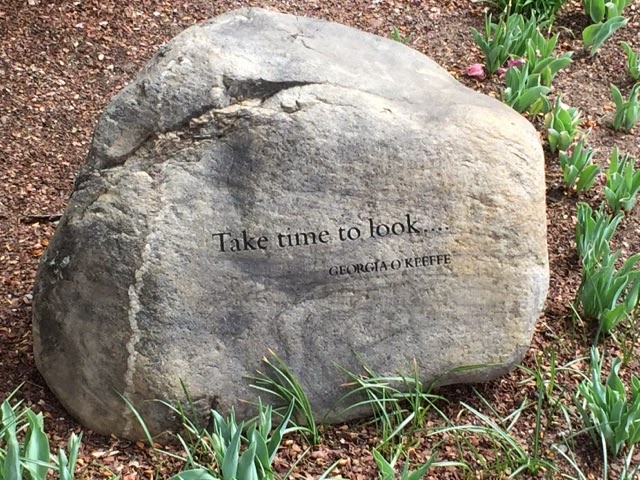 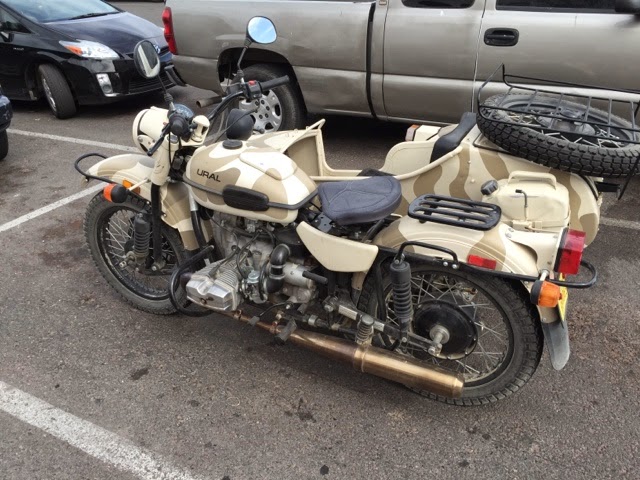 I have no idea what this was but it was very nice. 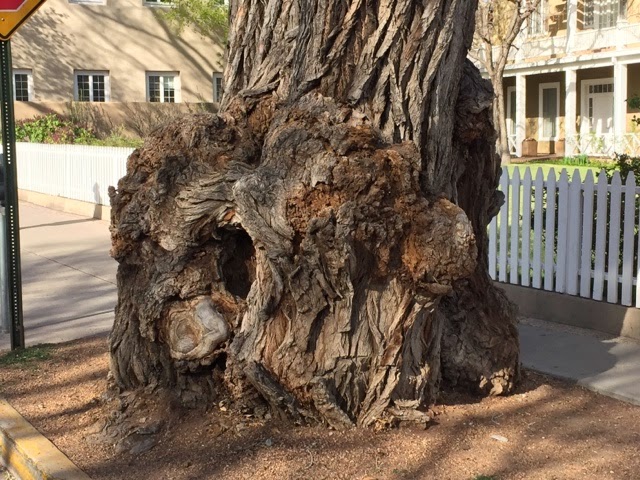 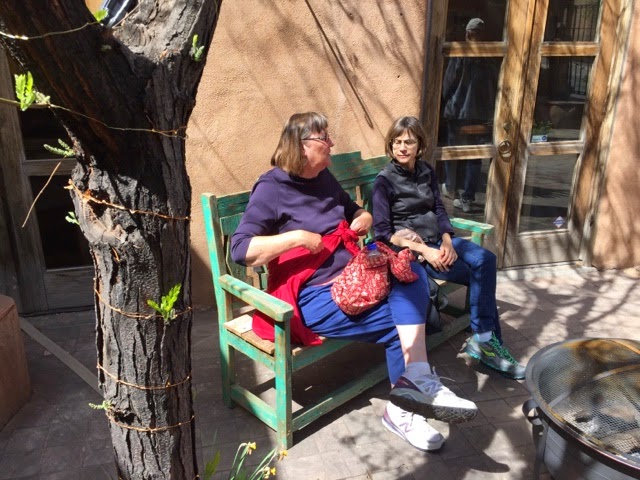 It was a lot of work.  When Ed and Barb were there we were extra busy.  But there was always time for a sit down break, a cup of coffee or tea or hot chocolate.

I suppose I could go on and on, Oh wait, I already have.
Santa Fe is a great place to visit for many reasons.  We have been here ten times in seven of the twelve months.  Winters are much milder and summers are never as hot and much dryer than Minnesota. It is not as green and there aren’t many trees but the colors and textures of the high desert are very captivating. Come see for yourself.  For all the time we have spent here we keep discovering new things to see and do. If you only have a few days treat it like a fine dinner, do just a few things and take in all they have to offer with time to savor and enjoy.
We are leaving Santa Fe, heading towards Hastings. But not in a straight line.
More later,  Susan and Roger