This is an excerpt from a ForeForums post I did on this project.  The help given and received on this forum is enormously helpful.  More than 3,000 owners and interested members make this an extraordinary resource.  It is also a great place to meet and make new friends. The project was done over the past couple weeks.

The extra structure in my 2001 36′ with one slide changes the arrangement of the parts compared to coaches without slides and other model years. The original setup had a single fiberglass panel onto which all of the parts were mounted plus a top piece.  The 3″ waste drain pipe comes through at the bottom, the gray and black tank valve handles are mounted in this panel and the service faucet is also mounted in this panel. And there is a 110v outlet, a phone jack and the cable input connection. The lower section of this bay in our coach has a black rubber liner that come up about 5″ on the sides and the fiberglass panel.

Disassembly
I turned off the water to the service faucet and drained as much water out as possible. Disassembly requires peeling the glued-on rubber liner from the fiberglass panel, removing a dozen or so screws and then trying to manipulate the panel with the valve handles and PEX lines to the faucet still attached.  The PEX lines need to be disconnected as well as the cable wires from each valve and the cable guide from the valve cable mount. The 110v outlet has to be removed as well as the cable/phone connection.  The faucet can be removed from the panel from the outside but the rest of the faucet and the water connections are attached to the panel. mark which cable goes to which valve.

This was not easy, sitting on the ground, bad knees and hips bent like pretzels, arms through impossibly narrow openings doing things you cannot see.  It took a while but I got it done.  All I could think of was trying to put it back together and then trying to service any of this stuff in the future.

Replacing the main waste valves.
I carefully located where the new third valve was going to go on the waste exit pipe. I marked the location so that when the third valve was installed and a 45° fitting attached the drain hose could be connected and the door closed.

The gray and black tanks were emptied, flushed and emptied again and the coach tipped toward the curb side. Each valve has four bolts that go through the flanges on each side of the valve body and the valve body.  They also go through the two halves of the valve cable attachment. (These bolts are a bit longer.) There are two bolts and nuts at the top of the valve cable attachment.  Once all of these bolts are off the “h” shaped outer drain pipe assembly can be removed.  Clean the flanges carefully.  I cut the outlet pipe to the correct length. 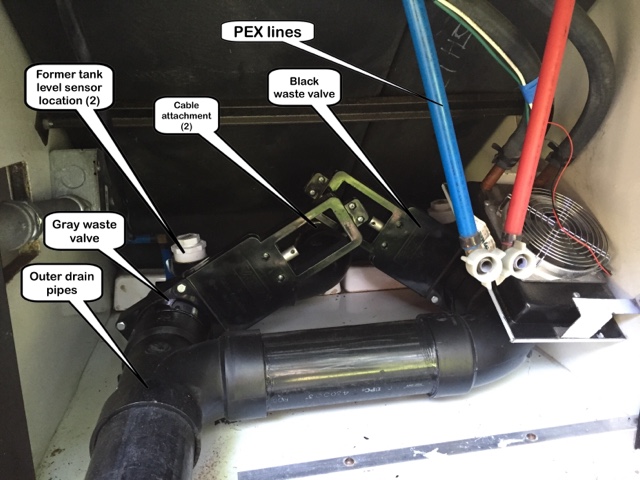 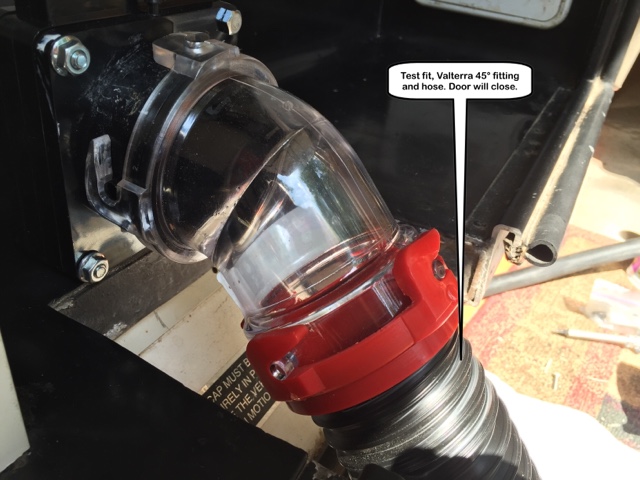 Use plumber’s silicone grease on the four cleaned flange faces, one rubber gasket goes on each flange, wipe some silicone grease around the face of each side of the valve blade.  Carefully reassemble the valve bodies, cable attachment and the outer “h” section and tighten the bolts.  Check the operation of the valves as you go.  Some long socket wrench extensions and a universal joint made this easier.  Once the cables are ready to go back in the outer cable sleeve fits into the top of the cable attachment and the wire goes into the valve handle.  A set screw makes the connection firm.  Save the allen wrench. 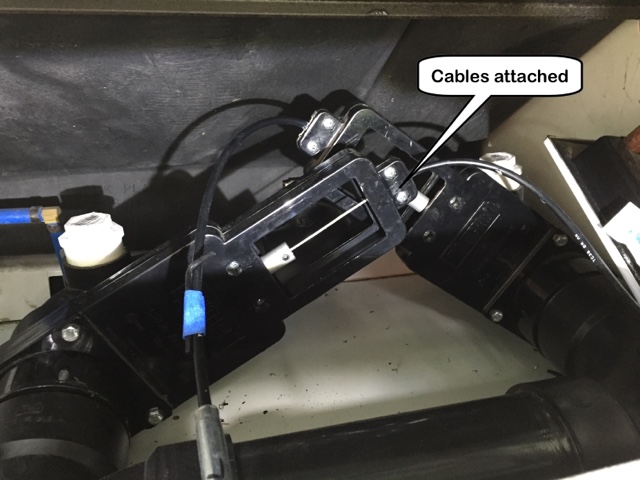 I wanted to keep the rubber liner, it seems to help keep things tidy. And I wanted this to be easier to reassemble and service if needed in the future.  So I sketched up a three piece solution and went to see my neighborhood sheet metal guy. “No problem”, he said.

Reassembly
The Bottom Section (14 ga stainless steel) has the rubber liner and the valve handles attached.  With this part installed, the cables are easy to attach to the black and gray tank main valves.  I added a few gallons of water to each waste tank, leveled the coach and did a paper towel under each valve for a couple hours drip test.  Dry towels. 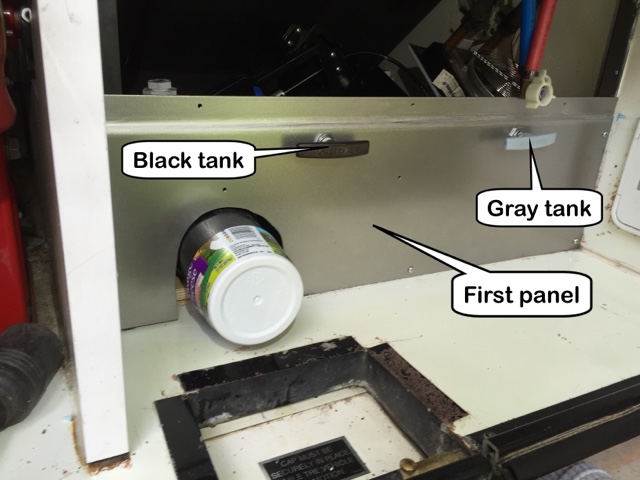 The Middle Section (14 ga stainless steel) has the 110v outlet and the cable/telephone connection and the connections for the hot and cold PEX lines.  This was pretty easy to install.  The PEX connections are hand tightened (plus a half turn with a wrench).  The electrical outlet is crimped on to the Romex cable and feeds through the hole and is attached with two screws from the front.  The phone/cable also feeds through the hole and attaches from the front. Once that was fixed in place I reinstalled the outside part of the service faucet (use silicon grease on the rubber washers).  I opened the manifold valves to the faucet, bled out air and ran water through the lines.  I left the pump on and did another paper towel under each set of connections behind the panel for a couple hours drip test.  Dry towels. 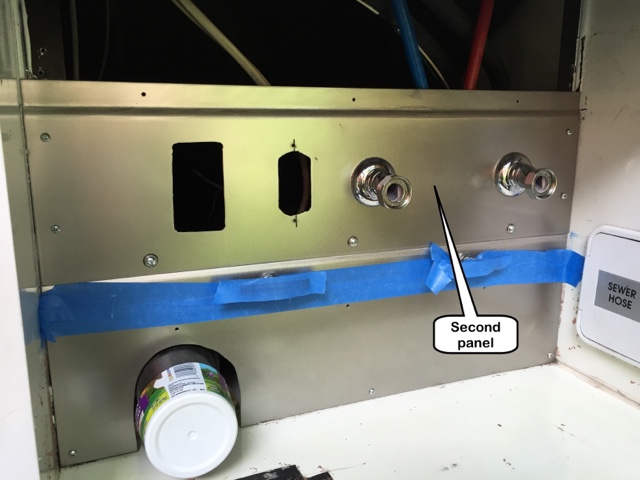 We talked for a while about no faucet, maybe just a set of valves and a spray hose.  Lots of appeal there but we use the faucet frequently for some warm soapy water to remove bugs from the front of the coach before they petrify.  There are bugs up north here that approach the size of small birds and seem to be made up of mostly green and yellow goo.  So we kept the faucet.  I repurposed a 50′ 3/8″ air line with hose fittings on each end as a service hose.  Very compact on an extension cord reel.  easy to get all around the coach as needed.

Then I fit in the Upper Section (also 14 ga stainless steel) and finished attaching it.  A bit of silicon seal went here and there. The light was attached to the top panel.  I didn’t even know there was one there until I started taking things apart.  I moved it to the side wall and used an LED bulb. 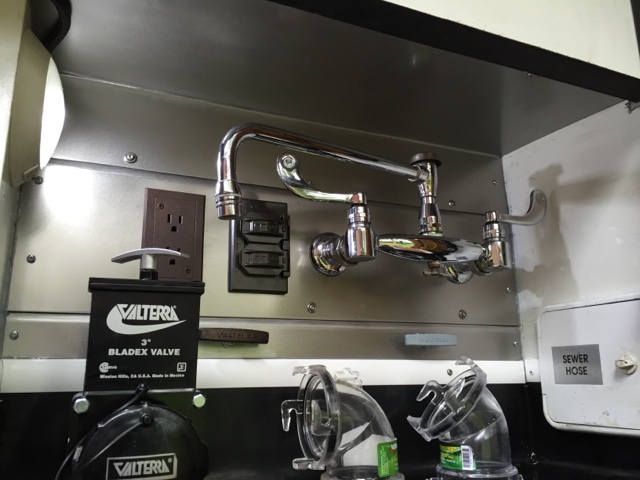 I doesn’t look all that different from the original but it is much more serviceable and the third valve will work well.

And I got the direct fresh water fill installed as well. 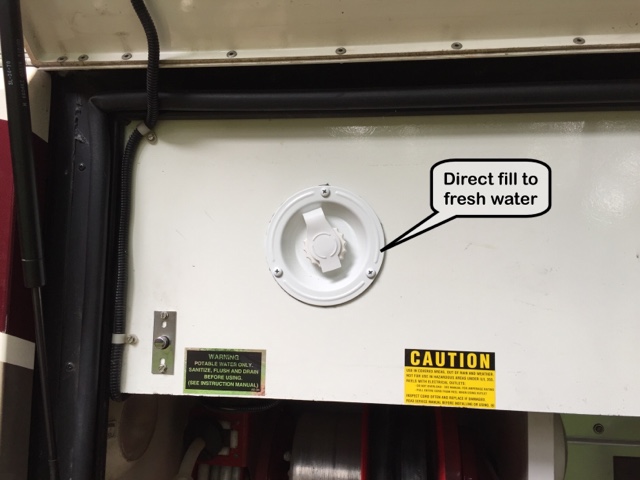 There was a reason for the big side doors on the barn. 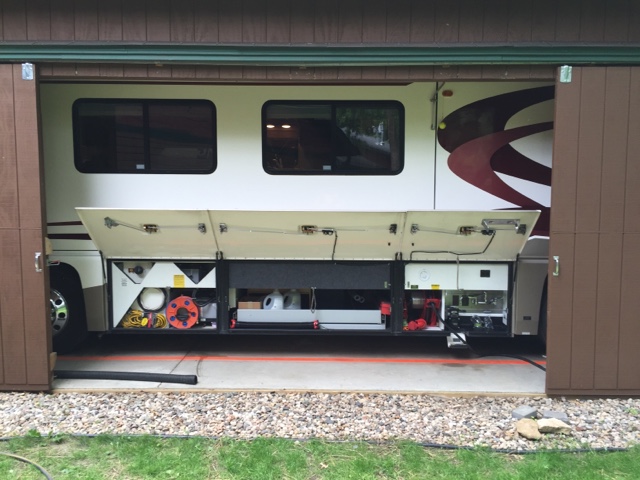