We stopped by Portland near my sister’s home at the Pheasant Ridge RV Resort in Wilsonville.  It is a pretty nice place, a little tight but for an in-town RV place just fine. 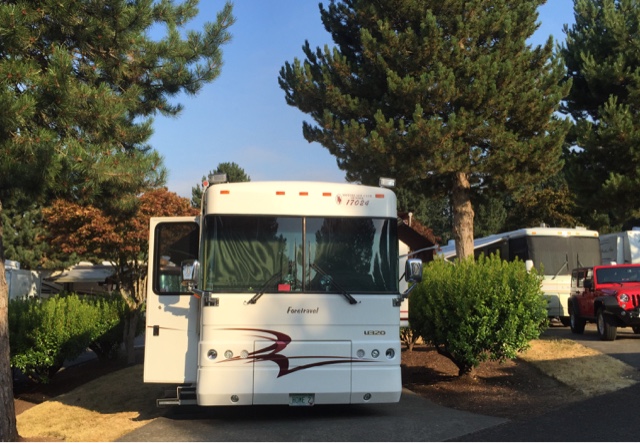 There were 132 spaces all on a hill side site. 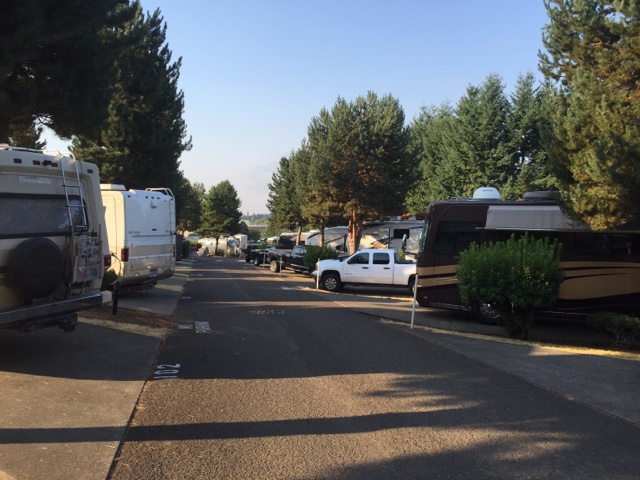 There was a Target nearby as well as a Fred Meyer (sort of like an upscale WalMart, not quite a Target) and a Home Depot not too far away.  Traffic was shocking.  Non-rush hour time from downtown to Wilsonville is about 25 minutes.  Rush hour starts very early and last untill 9:30 and then again by 2 until at least 7.  Rush hour time then is about 90 minutes.  So we managed to get to Judy’s in the off times.
We went there for supper on Wednesday. Thursday we went over just after rush hour and then headed for the Zoo.  We wanted to see the new Elephant Habitat.  It is not quite done yet, fully opening in Nov. 2015.  About 1/3 of it is open now for the seven elephants there.  The remaining sections have a valley that the elephants can walk through, a river and a pool for them to do elephant things, a building that they can go into that will have seating for visitiors, a health care facility and more.  Near the entrance to the main building there will be a stone bench in my nephew Eric’s memory.  It will be in a nice place where people will want to pause. 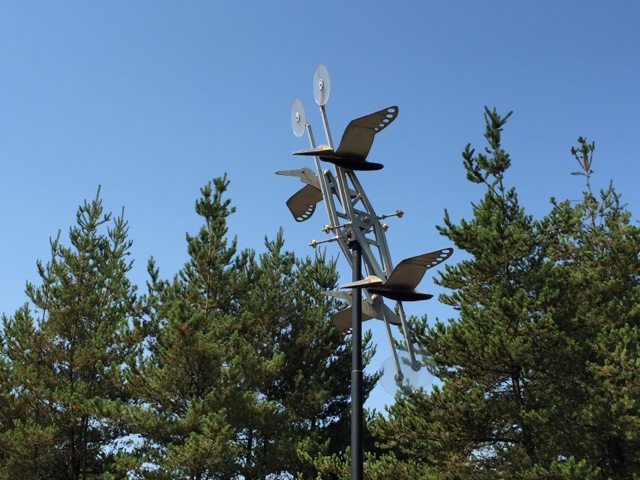 When we were in Santa Fe we were seriously looking at kinetic sculptures.  We always do. But we never buy.  This one was really pretty cool, a large moving sculpture that flew in 3D.
There was also a Zoo Train that took riders on a short trip.  Looked like it was right out of Disneyland of the 60s. 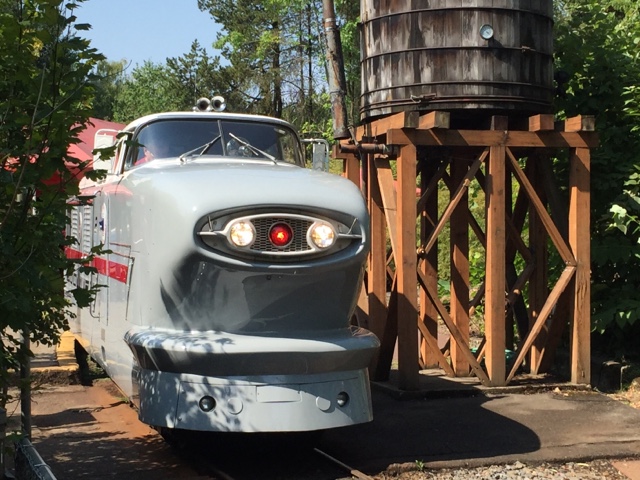 And then for dinner we went to The Country Cat on the east side of Portland (took an hour to get there). It was featured on Guy Fieri’s “Diners, Drive-Ins and Dives”.  They are famous for their grilled foods and for their cast iron skillet fried chicken.  Since it was my Dad’s Birthday and his favorite birthday dinner was fried chicken that is what Bruce and I had. I haven’t had real pan fried chicken like that since my Grandmother made it, and no wonder, it was fried in lard after being brined and then soaked overnight in buttermilk and then dredged in a flour mixture.  Wonderful.  Great mashed potatoes with a sausage gravey and bacon braised collard greens.  I also had a very nice vegetable soup in a ham hock broth withwheat berries.  Susan had a very tasty crispy fried Pacific snapper with a fennel slaw and parsley rice.  Judy had a “Potted Judy” cheese with crackers and raddish leaf raviolli and wild mushrooms tossed in hazelnut browned butter served over English peas and baby turnips. And there was dessert …
A very nice visit for a couple days.  We are off to Netart’s bay on the coast for four nights and then back up to Nehalem Bay State Park until the end of the month.  Judy and Bruce have a beach house (well a quarter share of it) about a mile away.  They are going out on Friday for two weeks.  Eric’s family will be there for a week as well.  It should be a good time.
More later,
Roger and Susan