Well I thought I should mention that Susan deserves great credit for her patience at St Anthony.  There wasn’t  too much to do there if you weren’t out riding on the dunes.  She did go out a couple of times. The going straight up the dune when you couldn’t see over the top and the turning across the face of the dune when the Jeep was tilted (especially to her side) about 45° was not included in the definition of the sissy ride she wanted to go on.

She read, she started a jig saw puzzle and she baked cookies and kept on smiling. 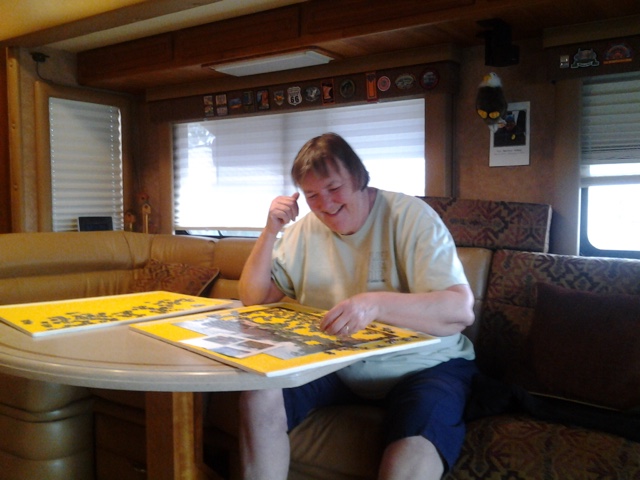 We left the dunes on the 9th and had two long (7-8 hours) driving days ahead of us.
The first day we headed south from St Anthony and then across the bottom of Idaho towards Oregon. We followed the Snake River in much the same way Lewis and Clark had done and then later folks heading  west on the Oregon Trail. 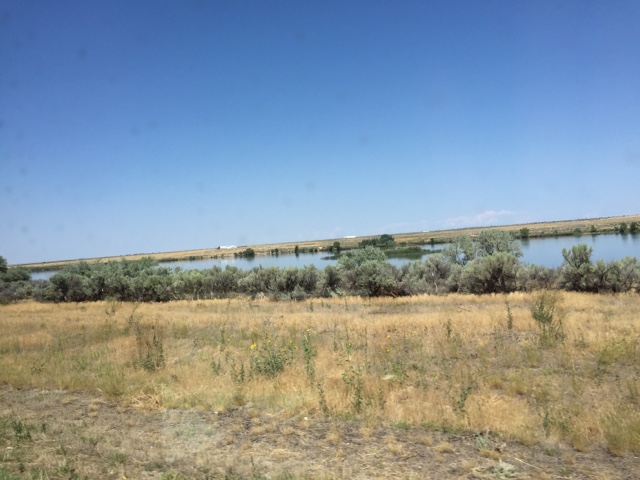 There were places where it was quite flat and the Snake river pretty placid.  Other places where the river twisted its way through narrow gorges.  The Oregon trail followed the river.  Some places it was tough going, many places had not much water for the animals or it was bad water, not much for them to graze on either.  It must have been hot, dusty and difficult for everyone and all of the animals.
Just across the border into Oregon they had a trecherous crossing of the Snake River at Farewell Bend where they came up on the bluffs and left the river for a long trek through the low mountains north to the Columbia River.  Today there is a State Park at Farewell Bend. 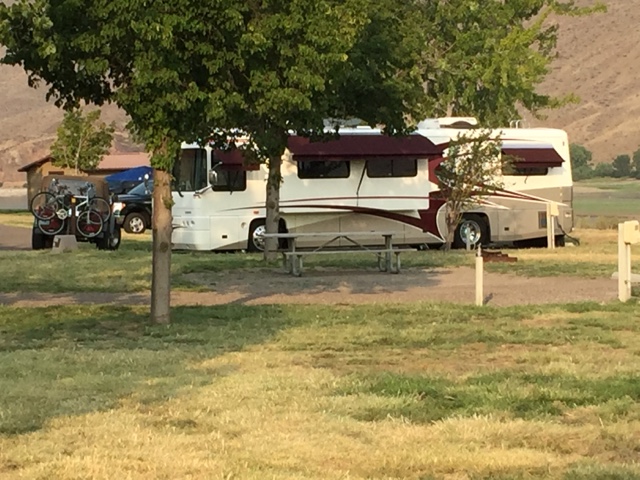 They were watering in the park but everywhere around the park was parched dry.  Grassland fires were burning in Washington and the air was very hazy and smoky smelling. 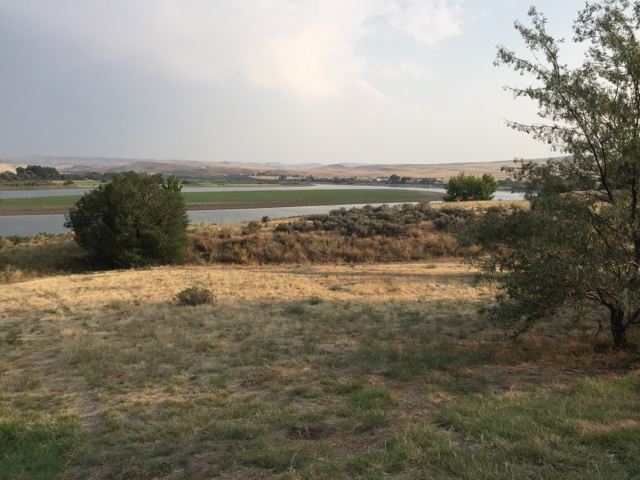 Our campsite looked out over the river.  The big green island in the middle is normally not seen.  The river was about 30 ft below its normal high water mark. 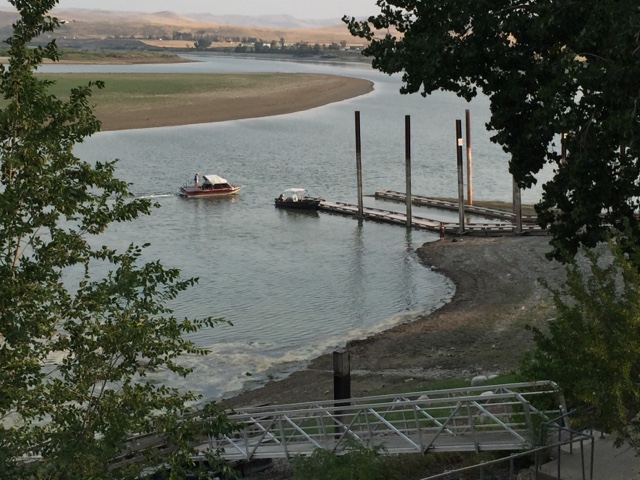 Look closely at the vertical pilings that hold the docks in place.  The top of the white part of the poles marks the normal high water level.  It is very dry out here.

The next day we headed north through some very big hills or small mountains on our way to the Columbia River, the same way the wagon trains went. 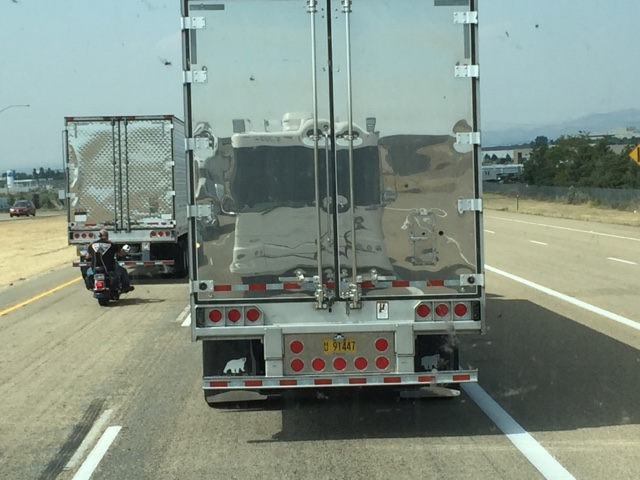 There was a lot of road construction. During one slow down we were following this truck with very shiny rear doors.  Pretty interesting view of our coach. 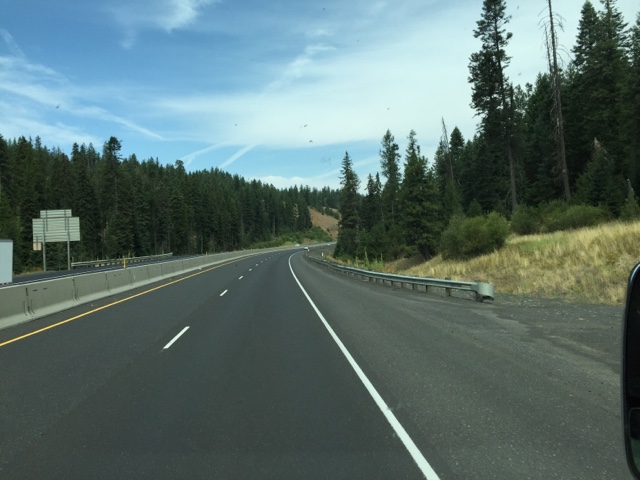 We didn’t actually start to see trees until we were quite a way down the Columbia River and then it was  a pretty amazing drive.  We were heading to Ainsworth State Park, only an hour east of Portland.  The air was still smokey. 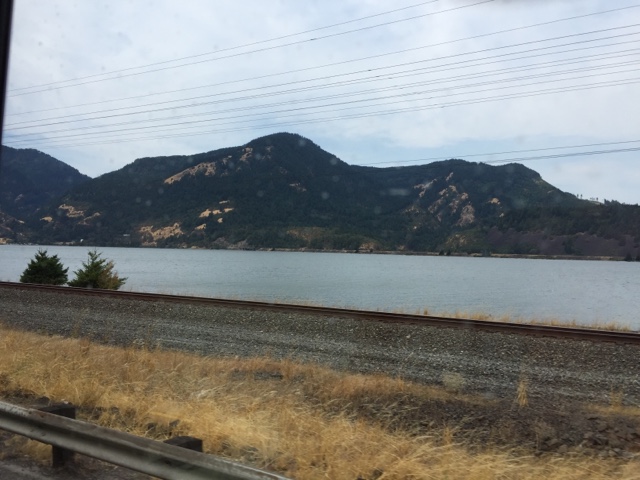 Looking across the river towards Washington the burned hillsides tell the story of where the smoke came from.
We got to Ainsworth State Park late in the afternoon, another long day of driving, about 6 – 7 hours.  It is not hard driving the coach and Susan drove a couple hours but we rarely drive that long.  It is a long way to the Pacific from Minnesota and there are some vast distances to cover.
Sorry no pictures from Ainsworth.  We try but sometimes forget.  It is a small campground off old US 30.  It has very narrow roads and is on a fairly steep hillside.  Our spot was a pull througn, one of about 15 way up at the top.  That made it easy, didn’t even have to disconnect the Jeep. It was in the 90’s that day and by 10 PM it was still in the 80’s.  We had the AC in the coach on earlier so it was cooler inside but still a warm night.
In the morning we are heading for Pheasant Ridge RV Resort in Wilsonville, OR only 20 minutes from my sisters house.  But wait,  if there is traffic (they have very, very long rush hours and it is very congested) it is more like an hour.  We will be there for two days.
More later,
Roger and Susan