Our Foretravel friends, Brad and Phyllis from Virginia, have been telling us about this place since we met them last winter in Parker, AZ. Well mostly Brad, for an old guy (78) he likes to play. It was very close to our way to Oregon so we planned a few days to visit and play in the St Anthony Sand Dunes.  This 35 mile x 5 mile area is sand deposited from white quartz sand that made up the bottoms of two giant lakes more than 10,000 years ago. As the climate warmed and the lakes shrank the wind has blown this sand and sand from the river basins of the Snake and Teton Rivers eastward to form the St Anthiny Sand Dunes.

The Bureau of Land Management (BLM) manages this area and has a campground at Egin Lakes near St Anthony. This campground is very nice with 50 amp electrical hookups, covered concrete pads, water and a dump station.  The Egin Lakes are a chain of fairly large lakes that hold water for irrigation. Every day we could see the lake levels rise and fall more than a foot as water was added or removed.  They are only about 3 ft deep in the middle so they are a great family recreation resource too.  There is access to the dunes here for off highway vehicles of every type.  There were jeeps, motocycles, ATVs, side by side and four seat ATVs and sand rails (custom built high powered sand machines.  The park has two former Army Hummers which were quite capable.  We also saw many people on horseback.
The sand dunes are up to 600 ft high.  The wind blows from many different directions which changes the shape and slopes of the dunes.  It also scours huge bowls swirling round and round throwing sand up and over the edges.  The biggest of these is Deadhorse Bowl, more than 400 ft deep and 1/3 of a mile across. 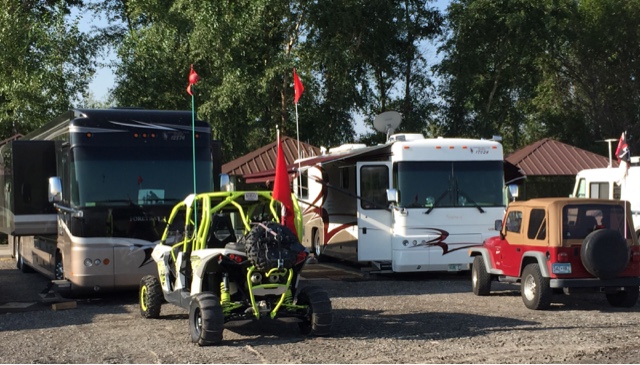 Brad saved us a spot right next to him.  The sites backed up to a wooded area.  There are moose in there, I didn’t see any but Brad said he saw two.
The first time out in the dunes I just rode along with Brad.  His 4 seat Can-Am Maverick has lots of power and paddle tires in the back for sand.  It really goes. 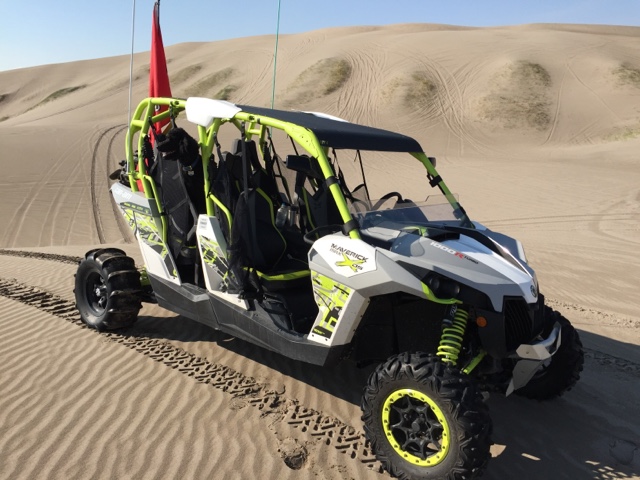 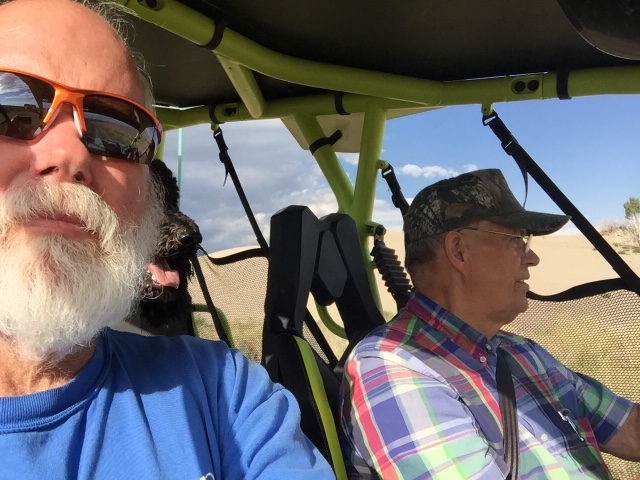 Barney always likes to ride along. 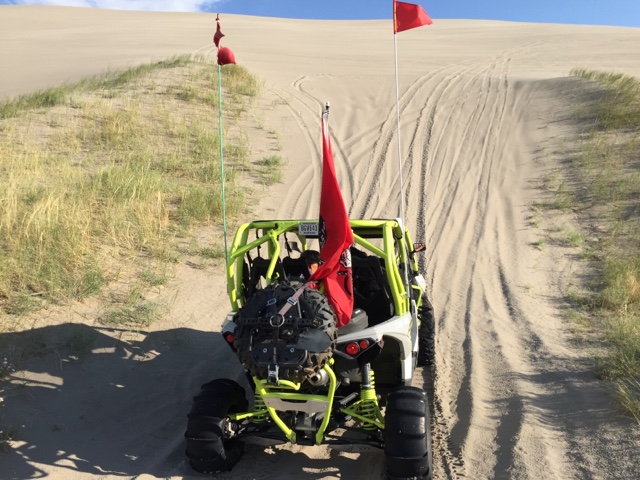 The dunes are very big and steep. Hard to get the scale across. 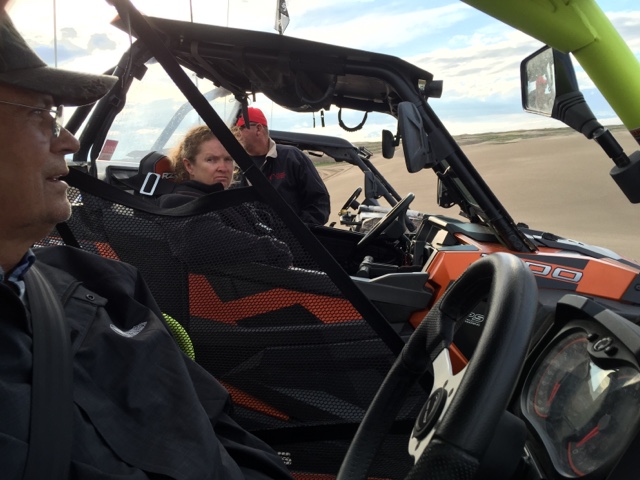 We met these nice folks from Colorado. The guy in the red hat really knew his way around the dunes so it was just fun following him. We were out for more than two hours, pretty much non-stop roller coaster of our own making.  Way, way fun! 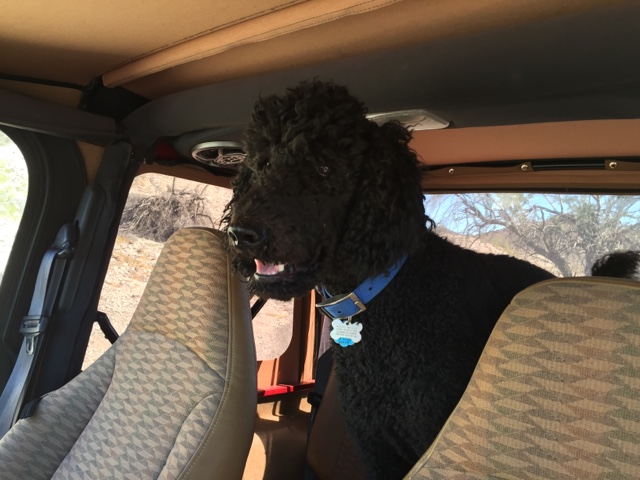 Barney is such a nice dog. 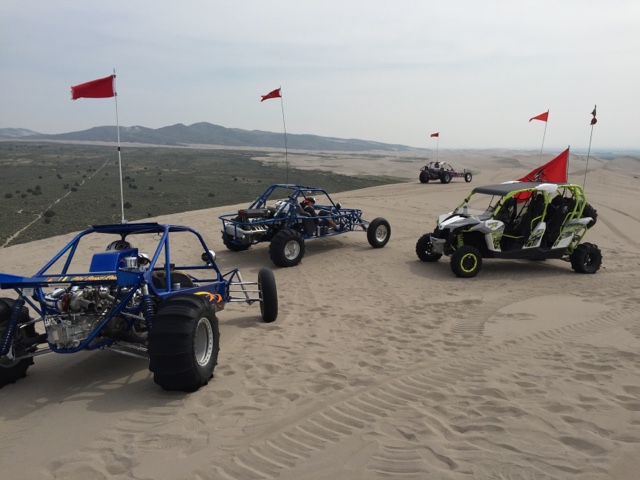 We ran into a gang of sand rails, mostly guys our age having loads of fun. 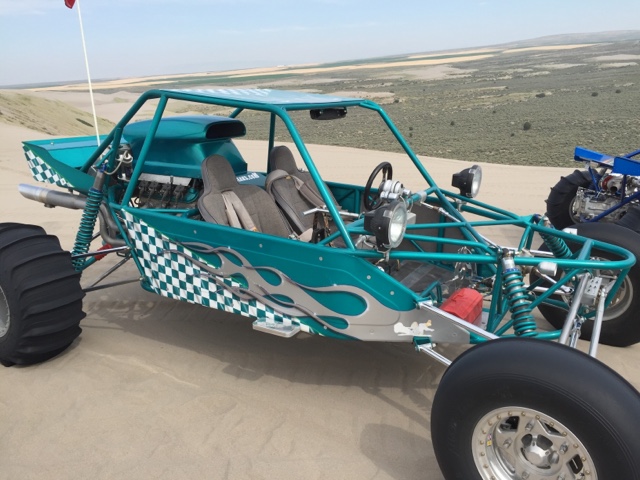 This one was a big V8 with stuff on it I don’t know how to spell.  It sounded like a drag racer and flew off across the sand like one. These guys were lots of fun to talk to.  They would tell you about their thises and thats.  Gear heads.  Honda, Subaru, VW, Chevy and Ford , 4, 6 and 8 cyl engines, 4 to 8 speed  manual transmissions, some had the engines oriented front to back, others back end in front, they used symetric transaxles to change the direction of rotation of the drive wheels to be correct no matter how the engine was oriented.

Standing start right up a 45° face of a dune, 400 ft high and right over the top and down a slope almost as steep.  Power, traction, momentum, a healthy respect for the sand and about 50% crazy is all it takes, well lots of money too. 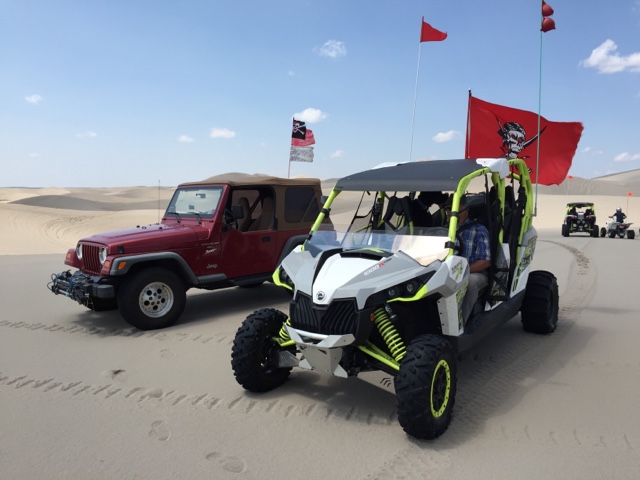 There is the Jeep with Brad’s 4 seat Maverick. 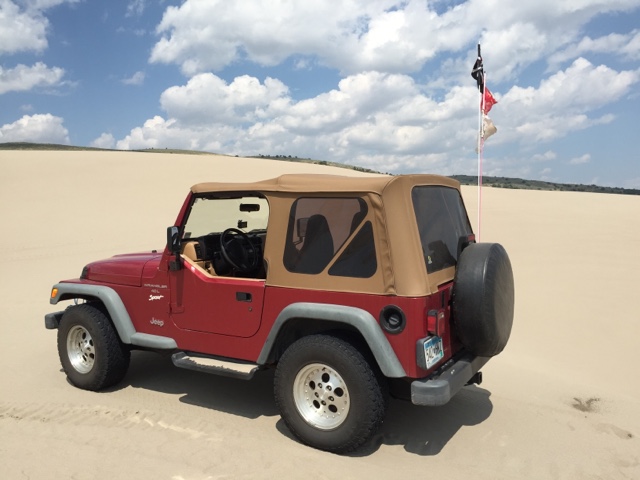 So that’s about it from the dunes.  Next we are off to the Snake River in Idaho and the Columbia River in Oregon.