We departed Hastings on Wednesday July 29th, 2015 for a trip out west.

Our general plan is to go through North Dakota so that we can see Teddy Roosevelt National Park. Then through Montana over the top and down the west side of Yellowstone National Park to St Anthony, ID where there are huge sand dunes to meet up with other Foretrvel friends. Then through ID and up the Snake River to the Columbia River and west to Portland for a couple of days. Then out to the Oregon coast for about three weeks. My sister, Judy and her husband, Bruce have a beach house only a mile or so from where we will be on the coast.  They will be there most of the time we are there.  Fun!
And then down to Crater Lake National Park for a day or two and then back to Grand Tetons National Park and Yellowstone National Park where we will be for two weeks.  Then we will wander towards home stopping at Devil’s Tower in WY and the Buffalo Roundup at Custer State Park in SD.  We will be in Hastings for about a week to pick apples and then off again to Indiana to a big Foretravel event and back via Michigan’s UP.  Home by the end of October. 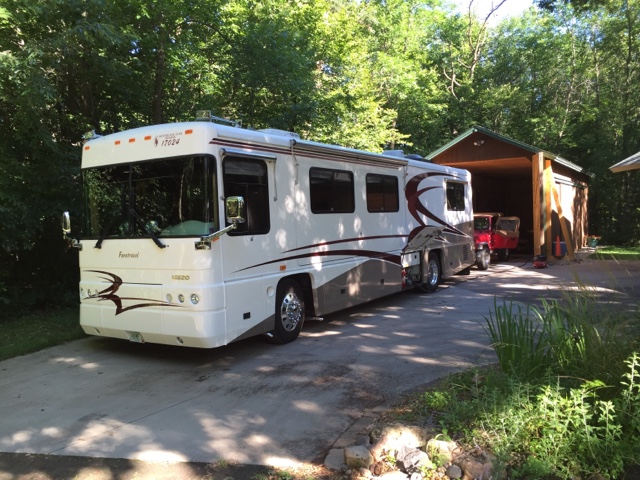 Wednesday morning, July 28, 2015. The wagon is loaded, horses hitched, trailer connected and we are ready to hit the trail. Most of the way through North Dakota and Montana we are following the trail of Lewis and Clark. Neither of us can ever remember being in ND before but I must have as a youngster on a family trip to Glacier National Park. 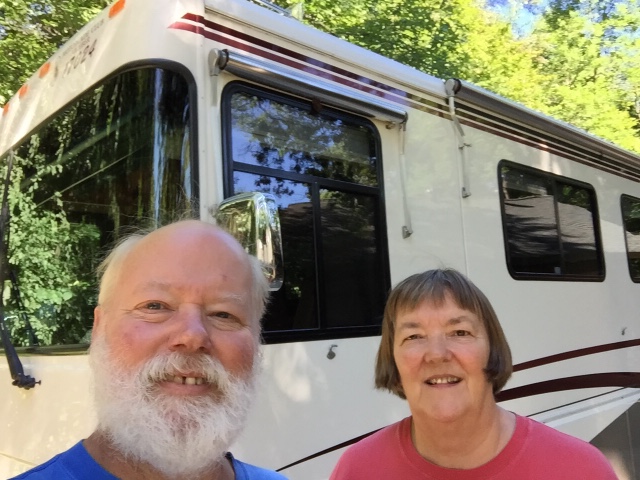 We are ready to go.
Heading West
From Hastings, the only way NW is all around the Twin Cities to I94.  That takes more than an hour.  As we approached Rogers, MN traffic slowed and then came to a stop.  A sign proclaimed a roadway incident ahead, expect delays.  So it was stop and the a very little go and stop for about thirty miles which took more than two hours. It was a section of pavement that failed. Lots of construction folk standing around looking at a hole. These are always patience testing events but there was no good way around and nothing to do but work through it. Good thing we didn’t have any hard itinerary to meet.
We got to Fargo, bought fuel because it was cheaper and headed to the State Fairgrounds campground. Nothing very fancy but for overnight just fine. We met some folks there who were staying for the summer. Not sure why but for $420 they got a shady spot with a paved parking pad, electricity, water and sewer connection. Very inexpensive. They spent the winter in TX.
To be honest we were dreading the drive across North Dakota.  We expected it to be worse than SD which was sooo boring.  But we were surprised. There is quite a variety of things to look at.  The terrain varies.  Not boring at all.

There miles of sun flowere.  Nice. We got to Mandan and then started following the Lewis and Clark Trail.  It follows the Misouri River westward and later in Montana picks up the Yellowstone River.
We got to Medora, ND only 25 miles from the Montana state line. We stayed at the Red Trails Campground.  On the way there we saw John and Kathy Juelfs heading east in their 2003 Foretravel. They had just been at the same campground for three days. Their coach has teal and cream colors and we remember it from last January when we were in Nacogdoches. They were there shopping for a FT and we (and others) spent quite a bit of time answering questions.  They bought it while we were there.
Medora is a very small town with lots of history.  And it is the entry to the southern part of the Teddy Roosevelt National Park. Virtually everything in this town is devoted to tourism. We wandered through town and checked out all of the shops, eating places, threaters, museums and everything else. They have a big musical theater production about the history of Medora.  There is a theater that has a play every day about Teddy Roosevelt. There is an all you can eat buffet sort of place. A place that serves steaks skewered on a pitch fork and deep fried. I hope they cleaned the pitch fork. We had supper at a small local place called the Cowboy Cafe.  Susan had Chicken Fried Steak, apparently a standard menu offering almost everywhere but Minnesota. She won’t be ordering that again.
The next morning we got up and drove to the TRNP visitor’s center for a map and some history.  TR came to this area hunting in the 1880’s.  After his wife and mother died on the same day in about 1884 he moved back here to immerse himself in a ranch life, one of hard work and character building.  He lived near Medora for a year and then moved 70 miles north to his Elkhorn Ranch. Some very severe winters and bad luck left his ranching  invetments in shambles, the lessons he learned here, the people and their devotion to the land and honesty and upright character of the people formed the foundation for his future role in the US especially the formation of the National Parks. This park is dedicated to his legacy. 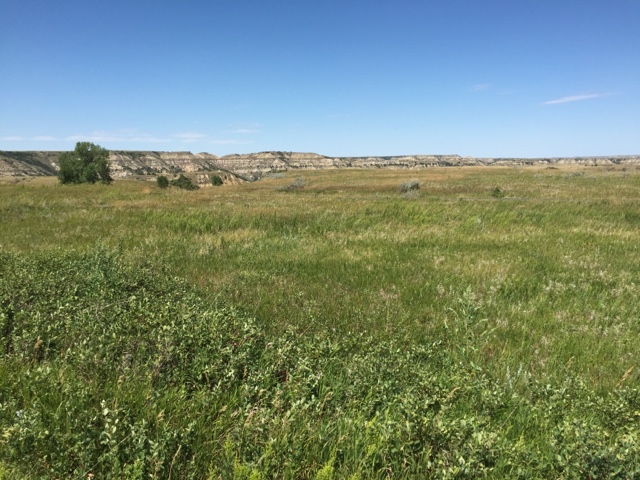 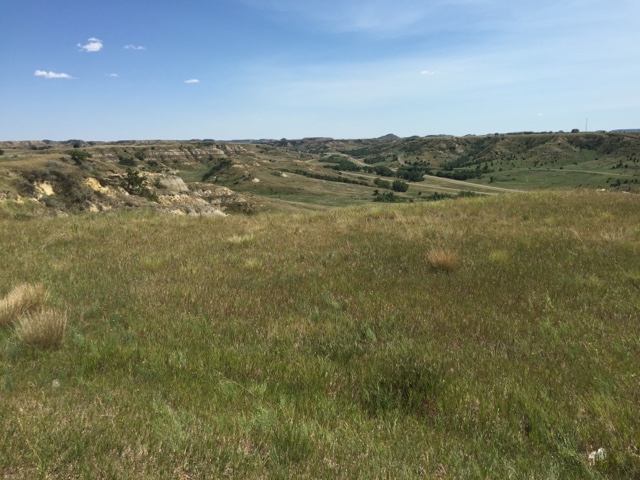 We drove on into the park stopping at a couple of overlooks heading for the campground to check it out.  We didn’t quite make it. At one stop the Jeep wouldn’t start. Turn the key, nothing.  Tried jumping it but the battery was OK.  So we got a tow back to the campground and made arrangements for a service stop in Bozeman at the Jeep dealer.  We got there Sunday evening and dropped the Jeep off in front of the service entrance, went to get fuel (everywhere west of here diesel was close to or over $3/gal) and then back for an overnight at the Jeep dealer.
The Jeep was done about noon. Our next stop is St Anthony ID where there are huge sand dunes, places to play. Our frienda Brad and Phyllis Metzger are there along with Barney the wonder dog.  We met then in Parker AZ last winter.
More later,
Roger and Susan.