We left Idaho Falls by nine in the A of M.  We were one day ahead of our scheduled arrival at Colter Bay which is about 45 miles north of Jackson, WY.  Gros Ventre campground is the first campground into the park, about 8 miles from Jackson.  RV accomodations like everything in Jackson are beyond comprehension expensive.  Gros Ventre (it is the name of a Native American tribe in this area, pronounced Grow Vaan) campgound is first come first served and usually had space at noon. That was our target. 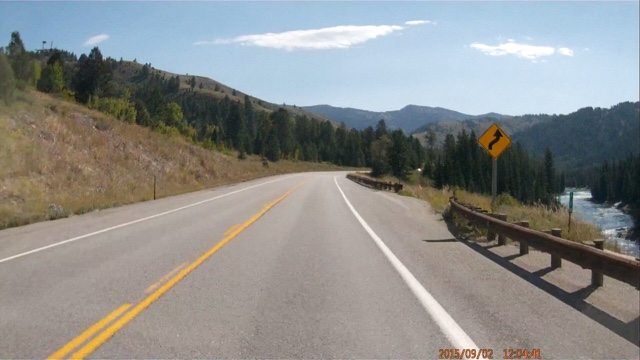 The highway from Idaho Falls across towards Jackson followed the Snake River and by the large Palisades reservoir.  I was expecting more of a challenging drive but it was good roads, not big grades up or down and very little traffic.
The pictures with the dates are from our dash cam.  Pretty good I think. It takes a continuous high definition movie as we drive along along with recording real time speed, direction, GPS coordinates and three axis accelerations.  When we play them back we see what the camera saw and we can follow our progress on Google maps.  These fill up a 32GB memory card in six hours and then start overwriting the oldest files.  They are easy to save the files and get stills from the video.
We drove into Jackson.  We were here in 1980.  This is not the Jackson we remember.
Ranting rises up …
It is now just like every other tourist mecca.  Sort of like a Cowboy Las Vegas. No grocery stores, no Target, no Walmart, some over priced gas stations, dozens of tourist related merchantile stores, many very expensive art galleries, many over priced, under quality food venues, extraordinarily pricey RV resorts, hotels, motels, lodges, (35 for a town of 9,000) condos, ski wear, cowboy wear and people comically over dressed to impress the art dealers.  Another out west town gone to retail tourist trade and the over-the-top trade to the ultra rich.  I guess there really isn’t much left out here other than that so milk it while you can.  And then there are the multi-million dollar show homes where the dozens of private jets at the local airport have brought the art gallery shoppers for their annual one week visit.  Susan says I am being a bit overdramatic.  Indeed!  In this small once ranch town the median home price is $749,000. Where do all of the ranch hands live?  Can they?
John D Rockefeller brought his family to the Jackson Hole (Hole = Valley) area to see the Teton Range in 1926.  He was so shocked by the gaudy tourist trade, the prostitutes, the bars, the gambling casinos and all that had settled in the area that he set out to buy everything in the valley that he could.  Over time he bought up more than 35,000 acres.  When the park was established in 1929 it only included the mountains themselves and the glacial lakes at their base to the east. Rockefeller tried to donate all that he had purchased to the park but it took until 1943 for President Roosevelt to accept the donation by making it a National Monument thus sidestepping a congress unwilling to do anything. It took until 1950 for the original National Park and the National Monument to be merged into the Grand Teton National Park as it is today.  There are still small ranches and private holdings within the Park boundaries.  Some of these are private homes, some are operated as Dude Ranches.  Wouldn’t Jeff Bridges be proud.
So somewhere along the way a robber barron did right by us all.  We should be thankful for everyone’s efforts to protect areas like this.  It is just stunningly beautiful.  Away from what happens in Jackson it becomes a place to enjoy what is here.  In Some places there are more people trying to enjoy it than others but find that spot only a few hundred yards from everyone else and you can be alone in the quiet beauty and amazing mountains so close.
Ranting subsides …
The town square is still there with the elk antler arches. 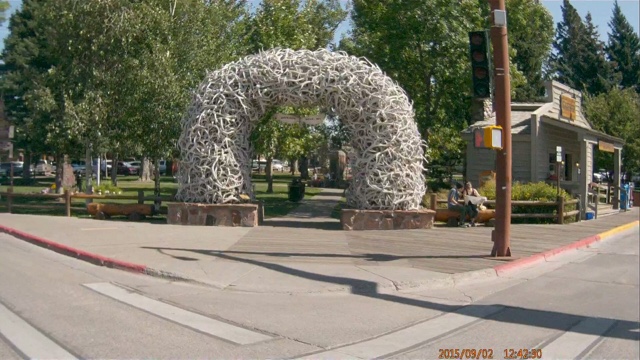 Now, this is like many old western towns.  The center of town, where people meet and gather.  This one had a fence all around to keep people out except through the gates and along the diagonal sidewalks and a small place to sit in the middle. We are pretty sure there were no other benches.  It was a photo opportunity. We compared it to the vibrant and full of life Plaza in Santa Fe. There is no camparison.
We drove our coach right through town.  The picture above from the dash cam was while we were turning the corner.  Another mile of gaudy commercialism (well, there I go again) to the park boundary past the edge of the National Elk Refuge and our first views of the Teton Range and another three miles to the turn to Gros Ventre Campground. 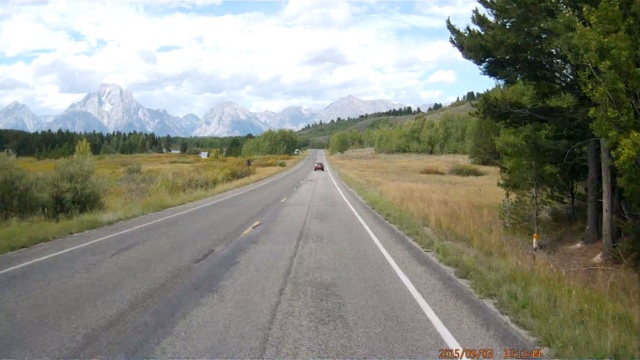 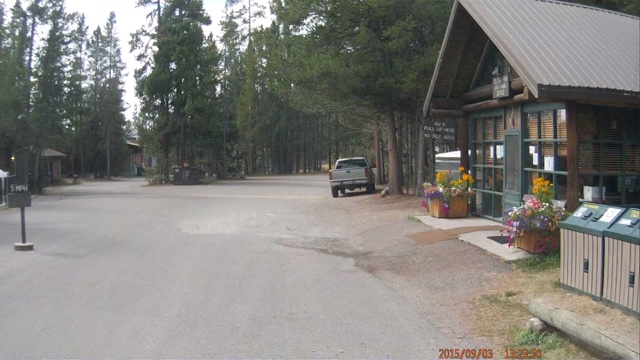 Check in at Gros Ventre was easy. 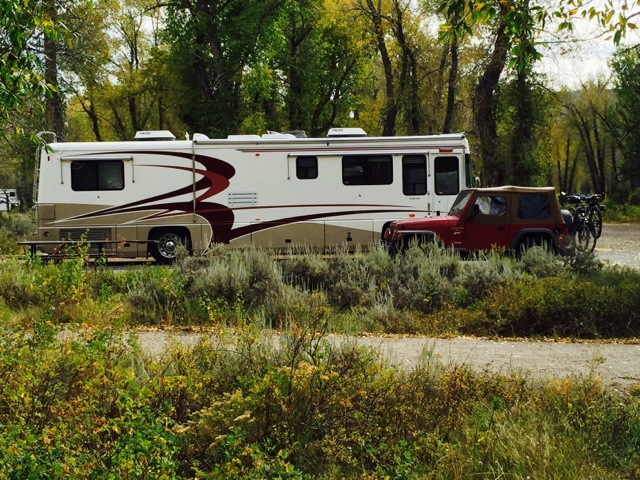 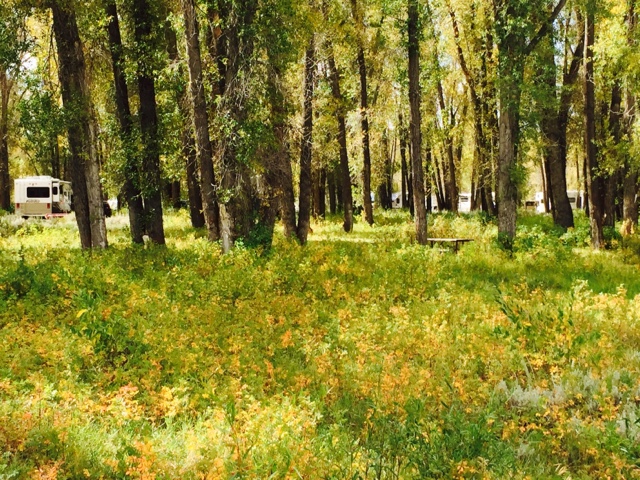 Color is starting in the Park. 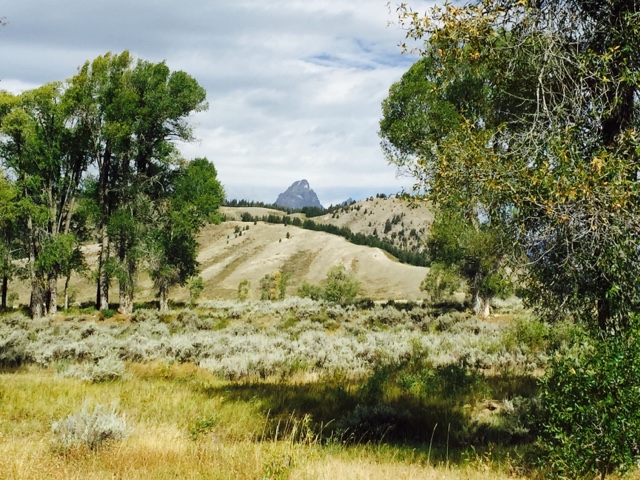 And over the glacial moraines that formed the sides of the Gros Ventre River valley, the Tetons poked up. 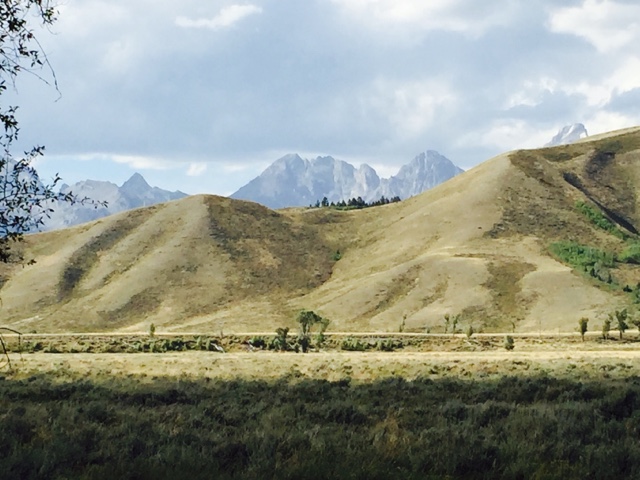 The next morning, Thursday, 9/3 we move to Coulter Bay.  Internet service here is slow but I hope to show in pictures what we will see as much as words.

More to come,
Roger and Susan