Our first full day at Colter Bay.  We didn’t want to drive anywhere so it was a day nearby.  We walked along the lake around the point on the north side of the marina, maybe three miles.

From the campground it is only a hundred yards to Jackson Lake and the beach.  The beach is all rocks. 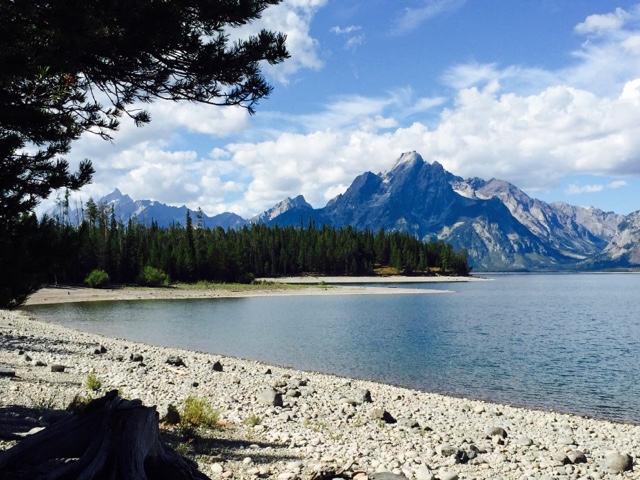 But it is a very pleasant place.  The trail went out around the point in the distance and then across a narrow land bridge to another island.  All geared up for a hike. 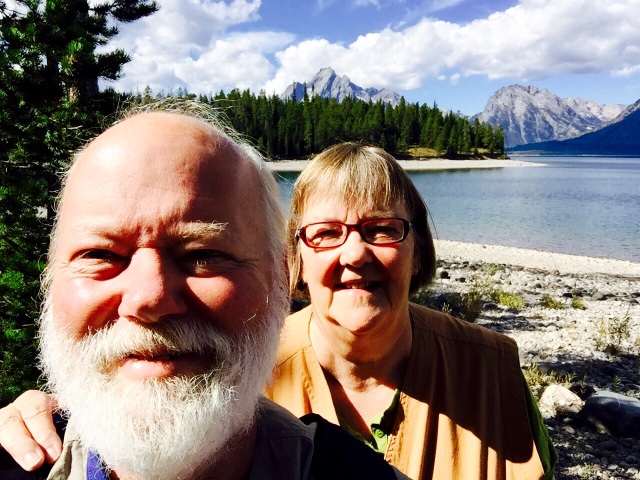 Most of the trail follows near the lakeshore but though the woods.  Squirrels and chipmunks were everywhere.  They are about 1/2 the size of the ones we have in MN.  They seemed mostly to ignore people.  You could be only a couple feet from a squirrel digging up seeds and eating them as fast as it could and it would ignore you.  They probably were watching you all the time but you posed no threat. These little squirrels are about 5″ long.  Think how you would feel if some giant thing a hundred feet tall or so came lumbering up to you.  Scared?  Probably but then they see big giant things all the time.
The forest is a process in never ending change.  Trees die and fall over, new trees are growing. Small plants and grasses are everywhere.  The soil here is measured in inches over glacial moraines of gravel all rounded off over time.  When trees are uprooted they pull up what little dirt there is and leave it in odd piles making you wonder what was digging there.  When you can see the roots they are very shallow but spread out.
When a tree dies what remains of its stump becomes a food store for all the mosses, lichens, bacteria and everything else that you normally never see. 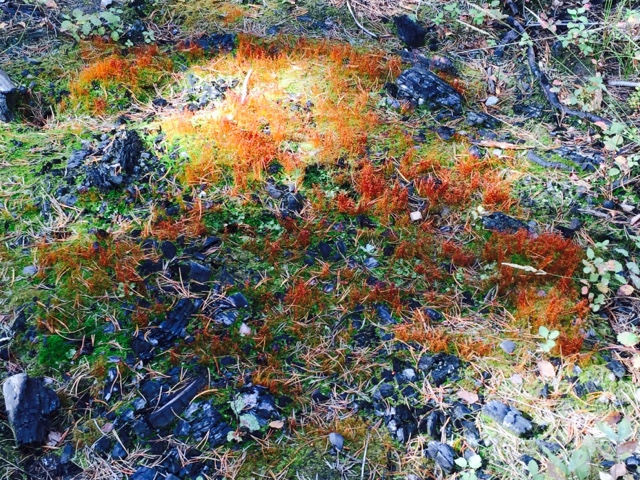 Except in the extraordinary colors and textures on the forest floor. 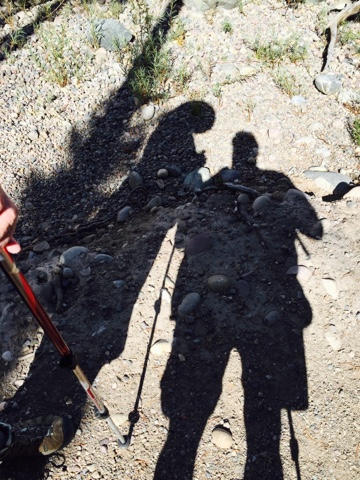 Some one followed us the whole way. 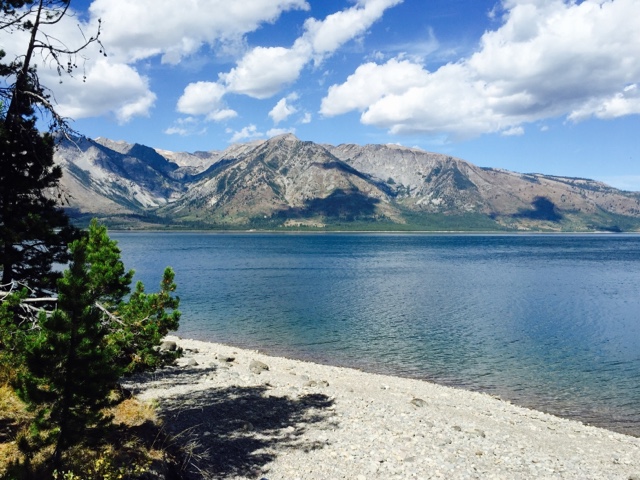 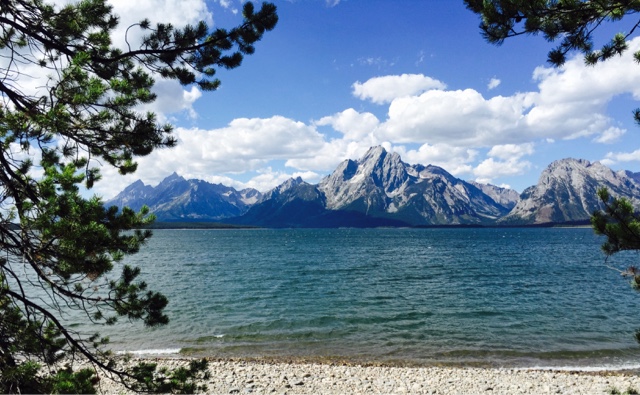 Each small side trail to the beach gave us a new look at the Teton Range.  The mountains come right down to Jackson Lake which is more than 400 ft deep.  It is about a mile across from here to the other side of the lake.  We are at about 6,800 ft here.  Grand Teton is over 11,000 ft high.

These are very young mountains in geological time. They were formed only millions of years ago when two plates broke apart. One land mass where we are now sank and the other where the nountains are was pushed upward. This is called a block fault uplift.  Sort of like if you had a brick sidewalks and one brick sank down and the adjacent brick was pushed up and there was a sharp face remaining.  At least three ice ages have occurred since and they have come north to south and west to east gouging  and scraping the mountains out of solid rock. Bulldozing the lakes and pushing up massive gravel moraines and then smothing out the valley.  Wind, snow, ice and water do the day to day work to get the mountains to there they are today.
There are several glaciers in these mountaint.  Much smaller today that in 1980 when we were here last  but still there.  You might think they are left over from the last ice age but they are very young  maybe only 300 years old or so made during a mini ice age. 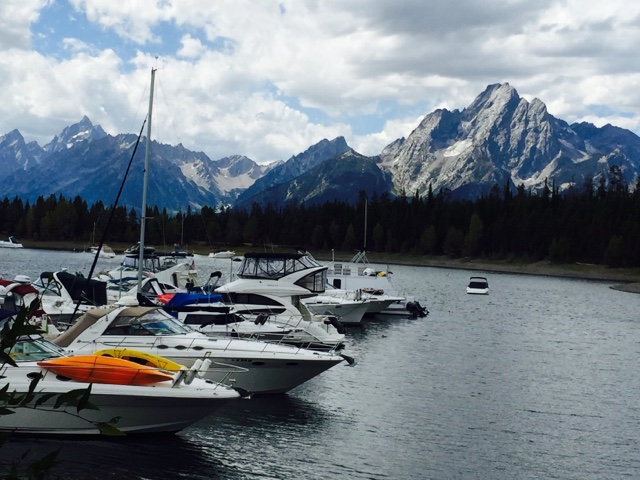 And back around to where the boats were lined up with the mountains in the background as if they were a jigsaw puzzle waiting to happen.

We did drive a bit later in the day down to the Jackson Lake Lodge, about 4 miles away. 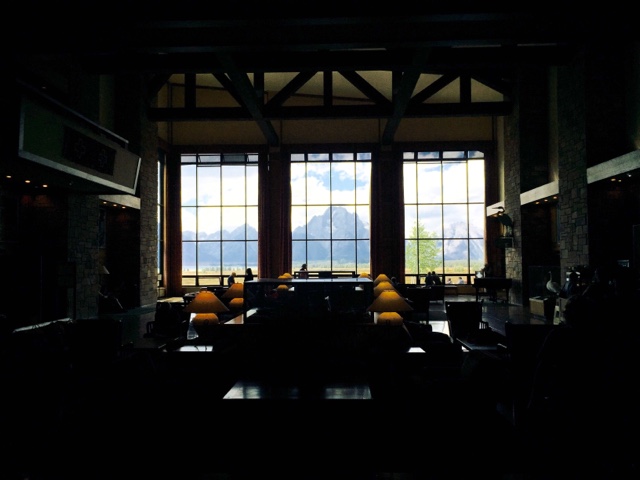 Hard to get the inside and the outside but the 60 ft tall windows gave the main room quite a view. 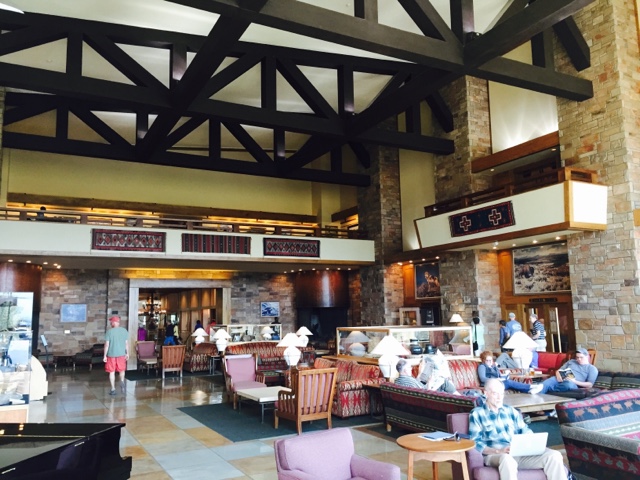 Hard to describe this stye. Big lodge look? But outside the view was amazing. 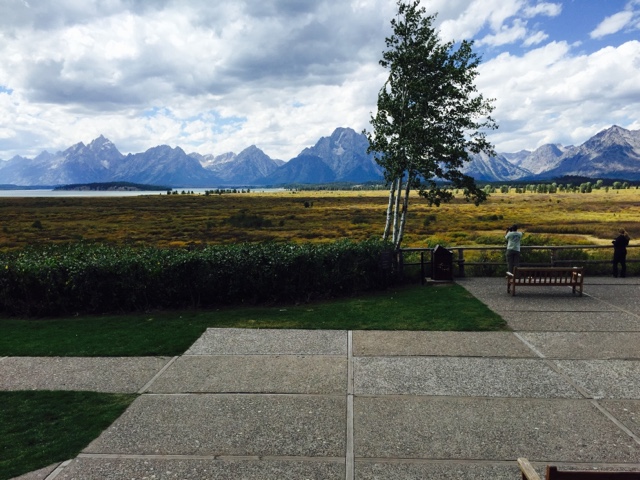 Another stroll to the beach in the evening gave a different look. Ducks in the water diving for whatever they were going for. Evening clouds from the west seem common lit up by the sun going down underneath them.
An evening stroll on the beach is rarely shared with more than 8 or 10 others on a half mile long “beach”. It is very quiet and peaceful.  Out here in the afternoon there are no more people, usually a bit more breeze and very warm mountain sun with air temps in the high 60’s and low 70’s.  A cold front is coming in the next few days, nighttime temps down into the low 30’s.  Not much change to daytime temps is forecast.
There is just so much here to see and absorb.  We are going down to Jackson to meet some folks and have breakfast in the next couple days.  Probably not much else there.
So more to come, much more.  Maybe not in real time but I am trying to keep up or catch up or not get any further behind.
Roger and Susan.